These gluten free vegan chocolate cupcakes are simply PERFECT: moist, fluffy and rich, and topped with the most amazing velvety-smooth, luxurious vegan chocolate buttercream. They’re incredibly easy to make and use only the usual pantry staples: no strange ingredients or egg replacements needed! They’re also pretty much indistinguishable from “regular” cupcakes – you’d never know that they’re made without any gluten, eggs or dairy. 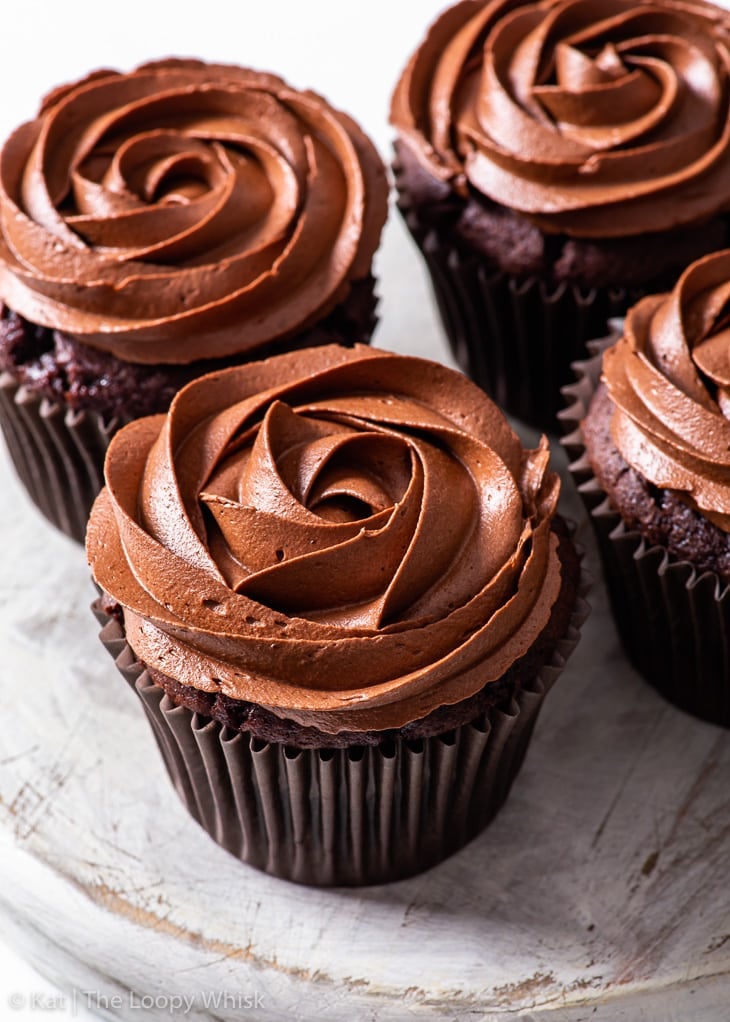 These are hands down THE BEST gluten free vegan chocolate cupcakes you’ll ever try. Everything about them is just spot on: from the moist, fluffy, intensely chocolatey cupcakes to the rich and fluffy vegan chocolate buttercream.

And you’d honestly never know that they’re made without any gluten, eggs or dairy! I’ve optimised the recipe to give cupcakes that are pretty much indistinguishable from their “regular” equivalents – so, they’re guaranteed to be a hit with everyone, regardless of whether or not they’re gluten free and/or vegan.

Importantly, this recipe uses only the usual pantry staples: no strange ingredients and no egg replacements needed!

And as per usual with my chocolate recipes, I made sure to stuff as much chocolate in there as possible. So, there’s both melted dark chocolate *and* cocoa powder in both the gluten free vegan cupcakes and in the vegan buttercream frosting. The final frosted cupcakes are basically one big, glorious chocolate overload – and there are no words for just how much I love them. And I hope you’ll love them too! Note that I do already have a gluten free vegan chocolate cupcake recipe on the blog that I published back in 2018. That recipe has been made and loved by many, but over the years my baking knowledge has evolved and expanded. So, it was high time to make a new and improved version of these fabulous cupcakes.

I didn’t want to delete that recipe, as many readers have enjoyed it over the years – and it also shows the progress of my baking journey. Personally, I prefer this new recipe for its richness and perfect textures. However, there’s no such thing as too many chocolate cupcakes to choose from… in general when it comes to chocolate, I’m a firm believer in the saying “the more, the merrier”. 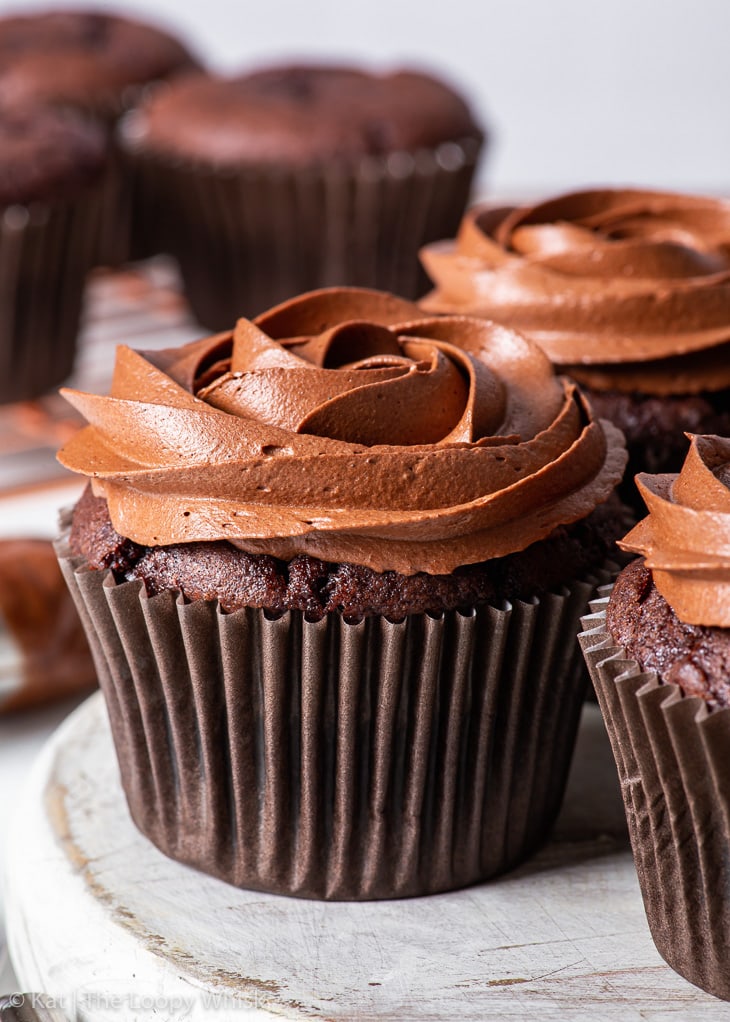 Before we get to the bits and bobs of making these amazing cupcakes – if you like what you’re seeing, subscribe to my newsletter to keep up to date on the latest recipes and tips!

These gluten free vegan chocolate cupcakes are incredibly easy to make: all you have to do is melt the chocolate and oil together, combine them with the wet ingredients, sift together the dry ingredients, and then mix it all together into a luscious, chocolatey batter. Yes, that’s all there is to it.

The batter will be fairly runny, almost like an extra-thick hot chocolate, and that’s exactly how it should be. It contains quite a high proportion of wet ingredients (especially water and non-dairy milk), and that’s what keeps these cupcakes wonderfully moist – without venturing over into fudgy brownie territory! So, while the cupcakes are moist and rich, they’re also fluffy, soft and airy. 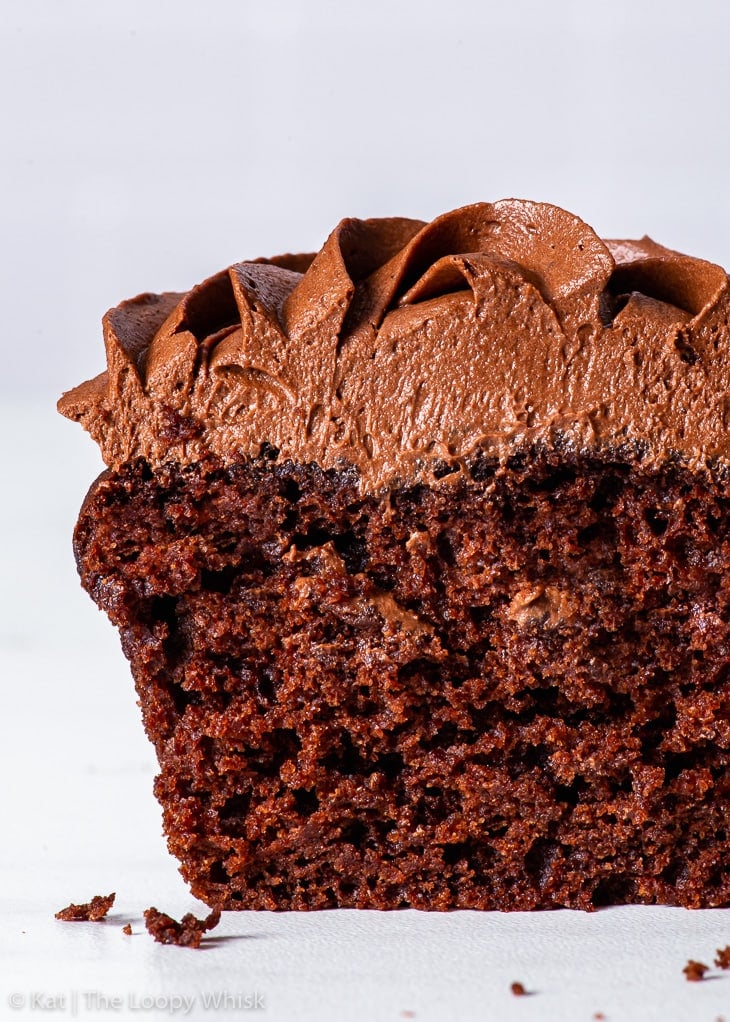 How to fill cupcake liners for PERFECT cupcakes 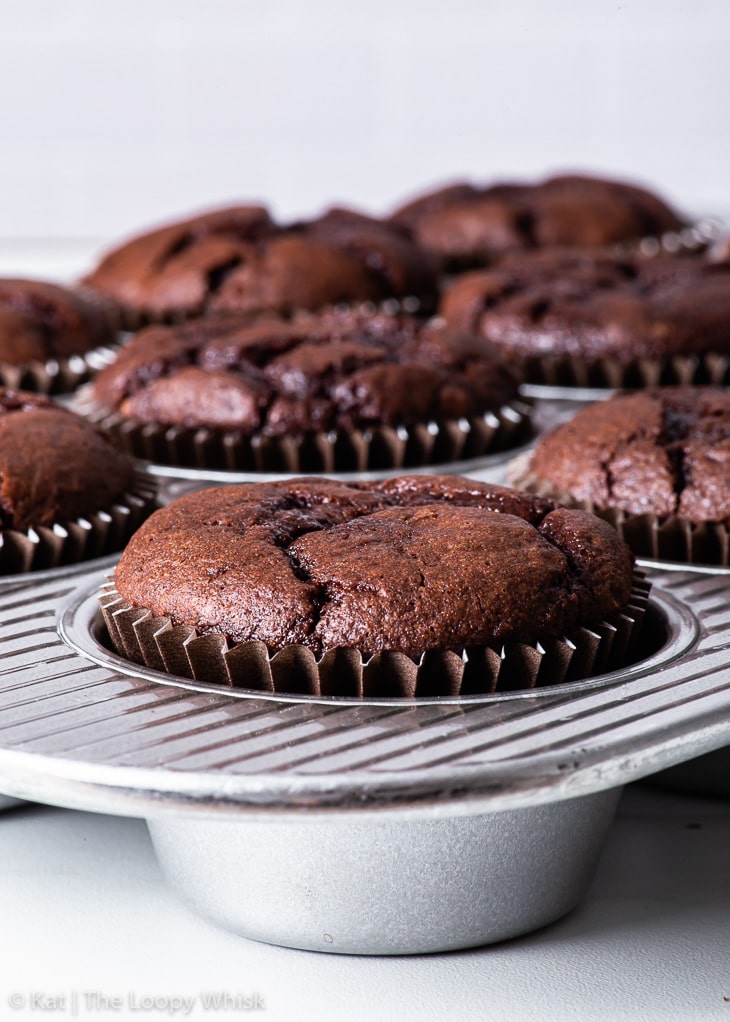 The exact amount of batter per cupcake will vary slightly depending on the size of your muffin/cupcake tin and liners (unfortunately, neither of these are standardised and they can vary in size/volume), but it’s a good rule of thumb that gives reliable results.

If you follow the recipe below precisely and accurately, and then divide the batter evenly between 12 liners, you should get the perfect amount of batter per each liner with no issues.

To divide the batter evenly between the liners or cups, I usually use a large “4 tablespoon” ice cream or cookie scoop. This helps you to scoop out equal portions of the batter each time.

I go into more detail about why that is in my cookbook Baked to Perfection (along with lots more interesting science about cupcakes & muffins and other gluten free baking), but in short: a lower oven temperature ensures that the edges and the centre of the cupcakes bake at a similar rate, which gives an even rise and results in a flat top that’s perfect for frosting.

(By the way, this is also the frosting that I used in my Small Batch Gluten Free Vegan Chocolate Cake, which is INCREDIBLE and you definitely need to try it!!)

For these cupcakes, I used the Stork vegan butter block that’s available here in the UK. However, most firm vegan/dairy free butter blocks will work well. Just make sure that you don’t use a soft vegan spread, as that would result in a loose, soft buttercream and that can cause issues when you pipe it onto the cupcakes.

Using a firm vegan butter alternative ensures that the buttercream pipes beautifully and holds its shape nicely even if the cupcakes stand at room temperature for a long time.

Because I’m terribly indecisive, I piped the buttercream in two different styles: in a tall, swirly mound on top of each cupcake and also in a simple rose pattern that’s just as gorgeous. I used the Wilton 1M piping tip in both cases. 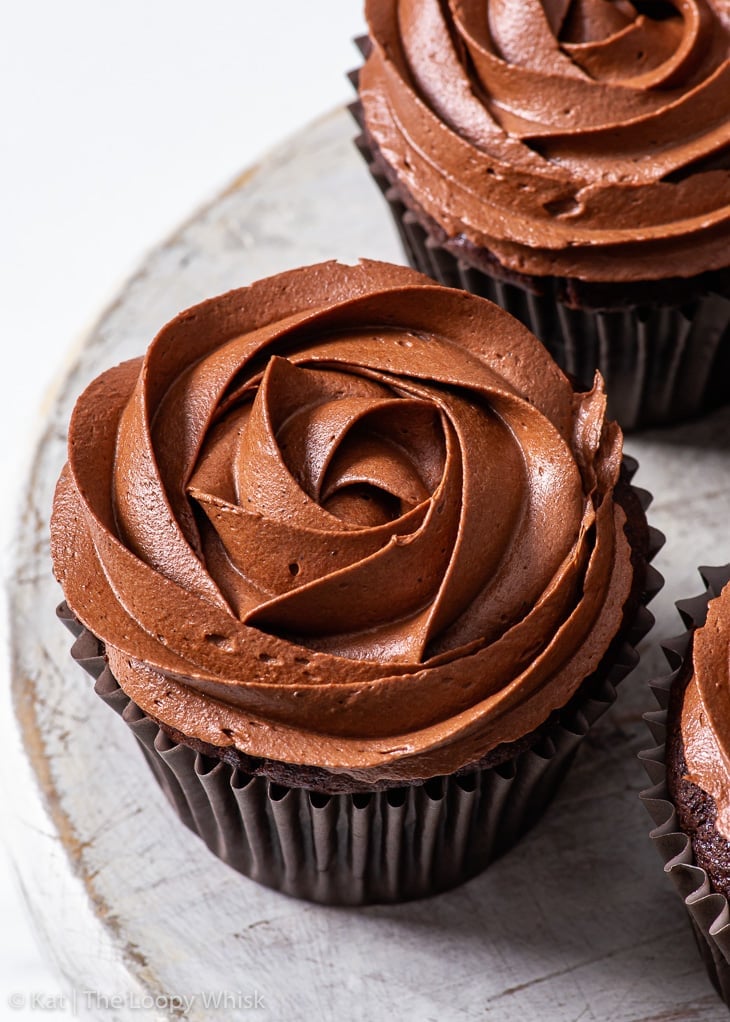 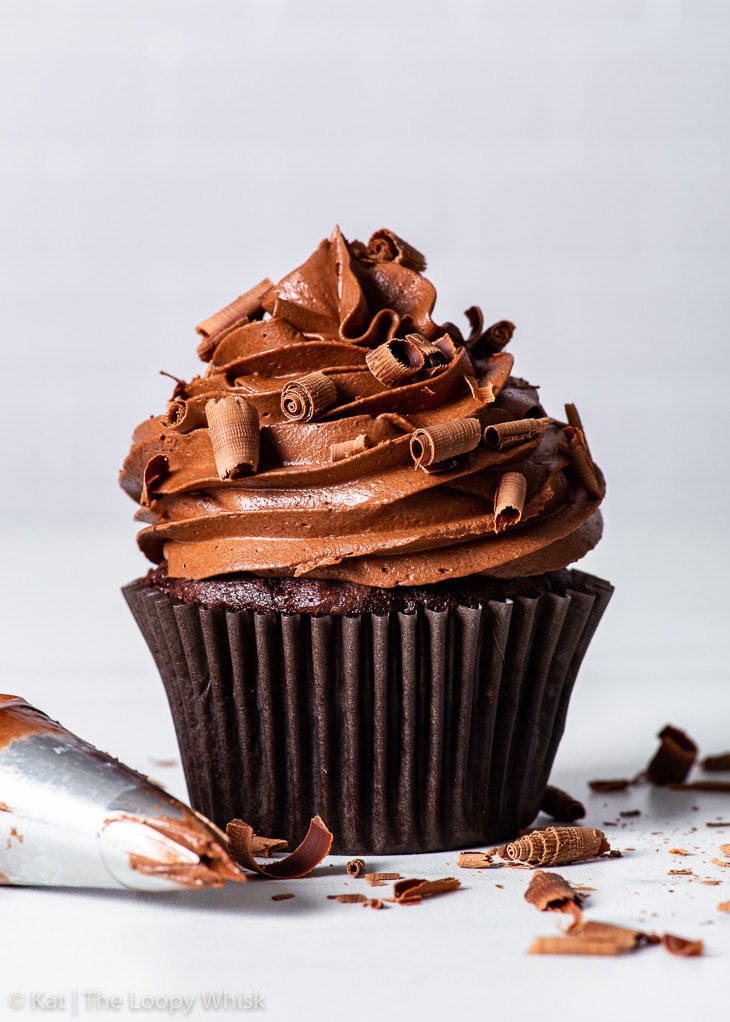 You can pipe the buttercream whichever way you like, there’s no rules here. The main difference between the two styles of piping (aside from the obvious visual difference) is how much frosting you get per cupcake.

If, on the other hand, you’re a believer in a 1:1 frosting-to-cupcake ratio, then the tall swirl is the one for you (right in the photo below). 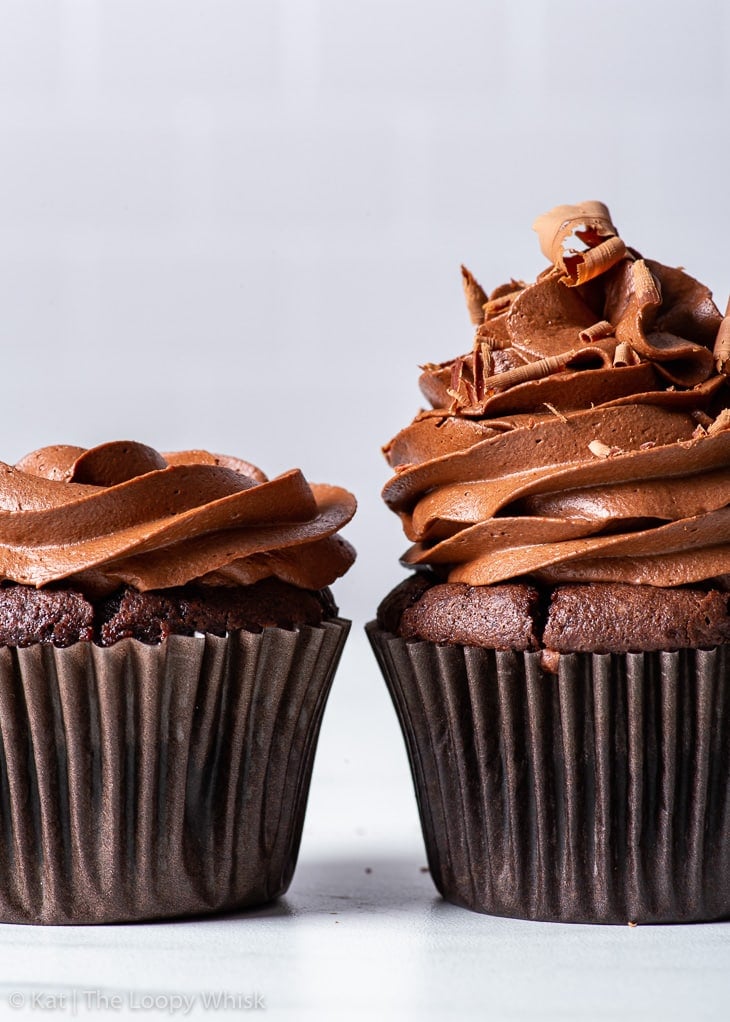 As a simple finishing touch, you can sprinkle the cupcakes with chocolate shavings as I’ve done for some of them, but chocolate sprinkles or other kinds of sprinkles will also work great.

And there you have it: this is how you make the PERFECT gluten free vegan chocolate cupcakes. These are seriously amazing, and you’d never know that they’re made without any gluten, eggs or dairy. They’re just ridiculously delicious, super easy to make, and you’ll want to make them over and over (and over) again. 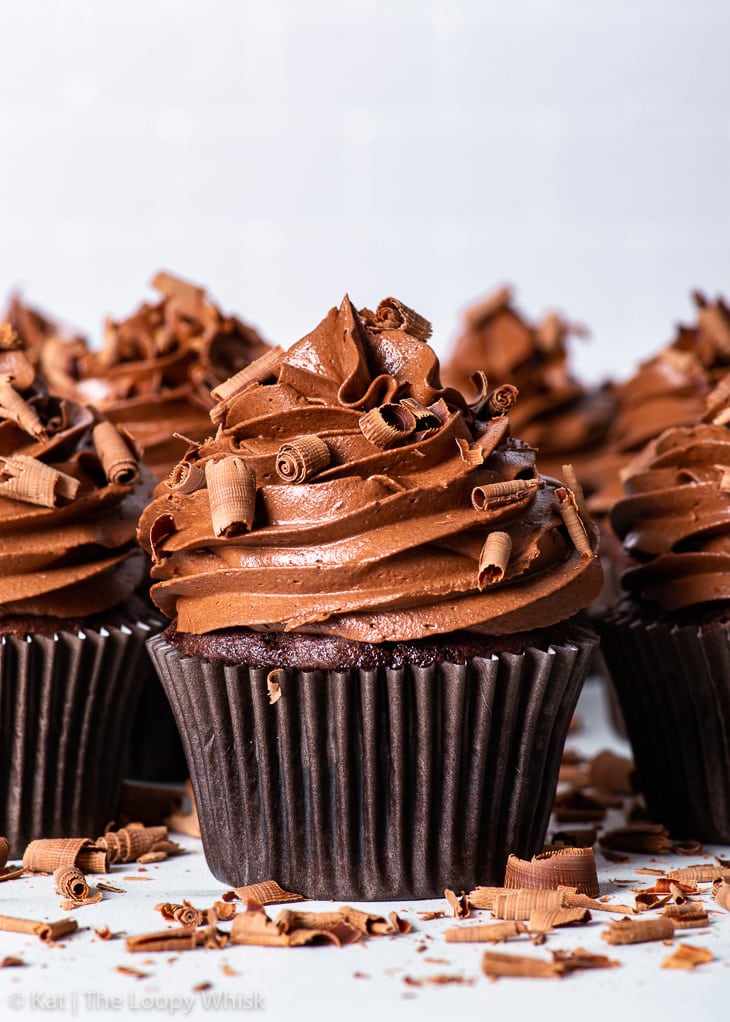 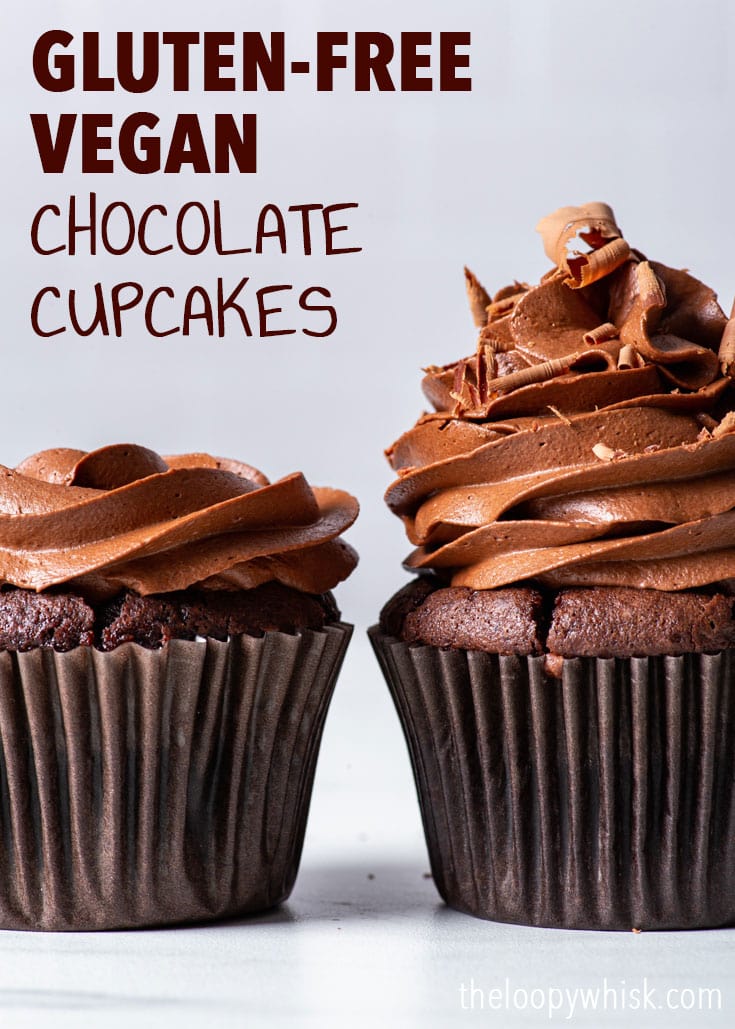 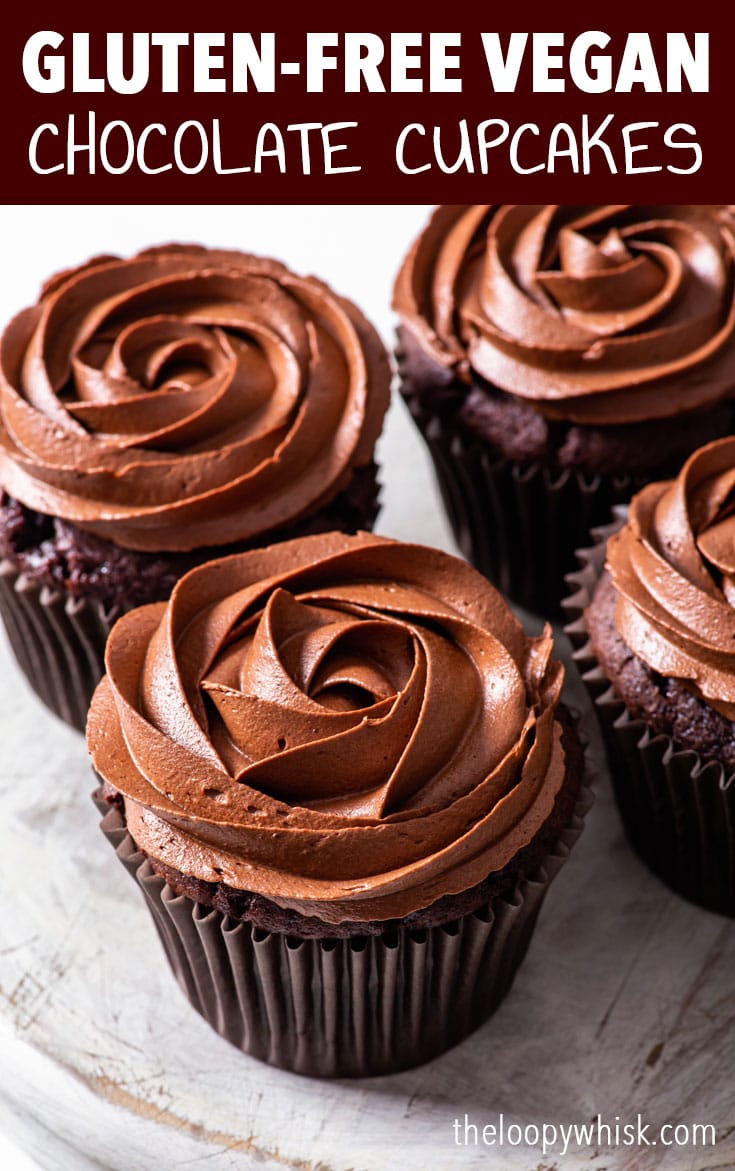 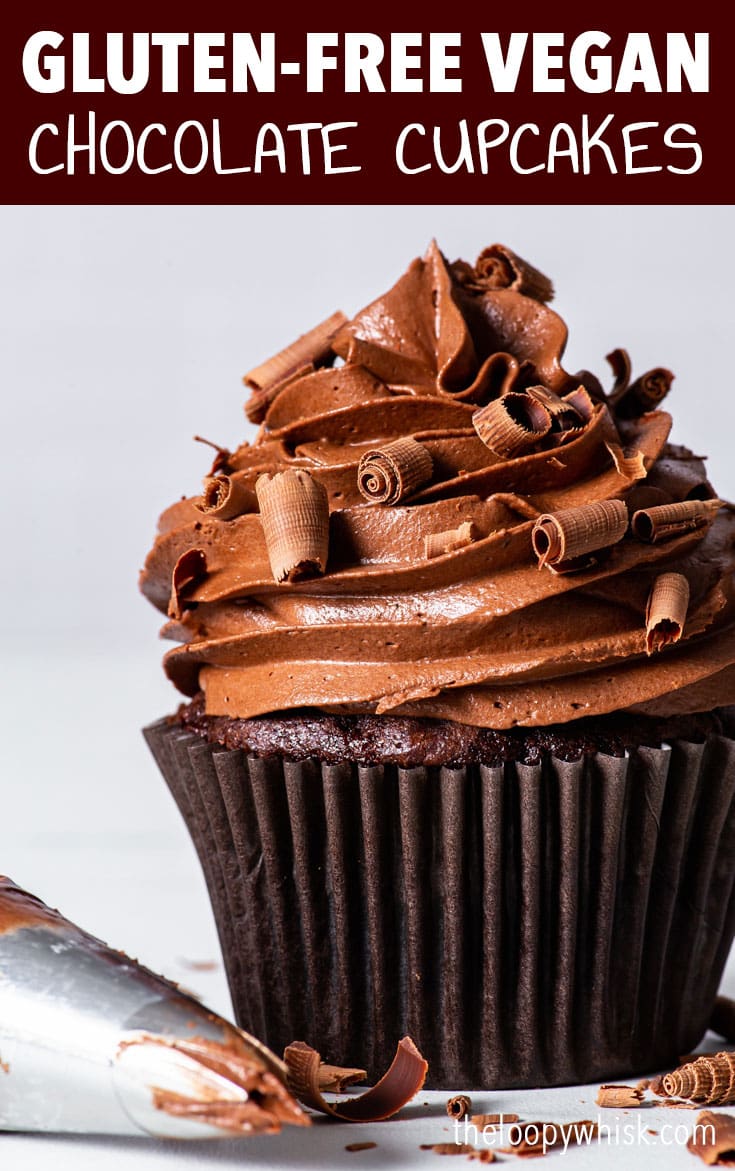