Skip to content
Order my GLUTEN-FREE cookbook!
About meCookbookContactWork with me
Home » Almond Flour, Almond Meal and Ground Almonds: What’s the Difference?

Almond flour and almond meal are incredibly important ingredients in gluten free baking, and you’ll often see them used in my recipes. However, there is some confusion about the difference between the two and whether they can be used interchangeably. Here, I’m sharing a comprehensive overview of the different ground almond products (including how to tell them apart even when the names ‘almond flour’ and ‘almond meal’ are often used incorrectly) and how they can be used in gluten free baking. 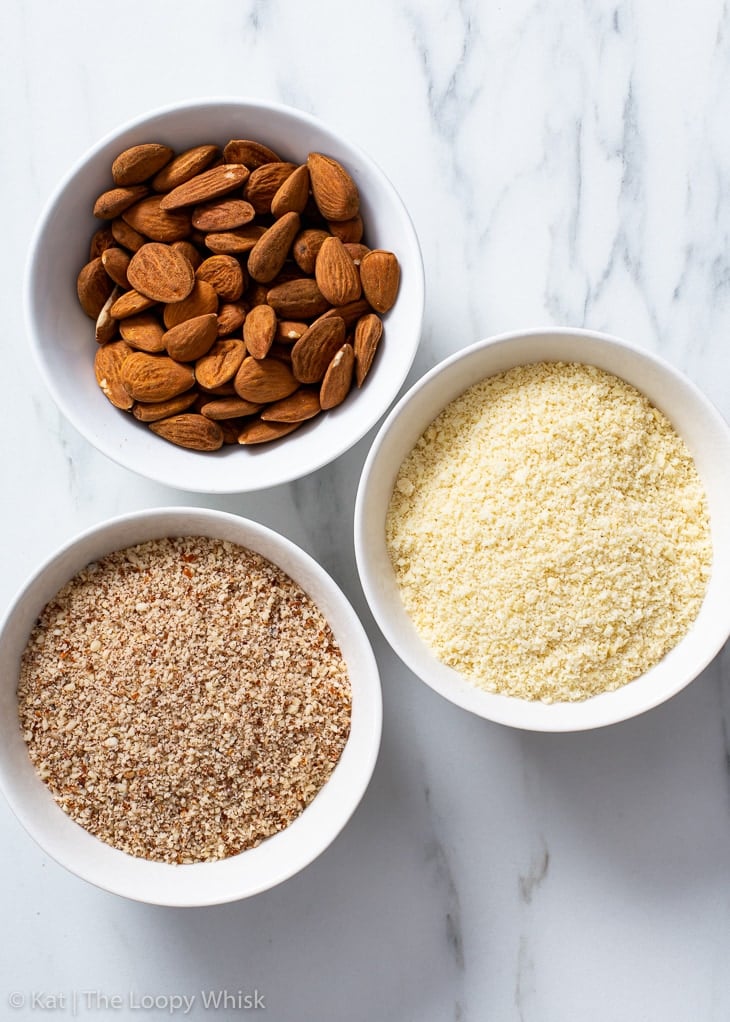 Every time I publish a recipe that uses almond flour, I get asked the same questions: Is this the same as almond meal? Can I use ground almonds instead? What’s the difference between almond flour and almond meal?

And I completely get it: these ground almond products are all too frequently mislabelled by brands and stores, and people tend to use the names ‘almond flour’, ‘almond meal’ and ‘ground almonds’ pretty much interchangeably.

I hope that this blog post will clear up the confusion surrounding the difference between almond flour and almond meal – so that when you encounter one or the other in a recipe, you’ll know *exactly* what ingredient to use (and when you can swap one for the other).

Before we get to the bits and bobs of almond flour vs almond meal – if you like what you’re seeing, subscribe to my newsletter to keep up to date on the latest recipes and tips!

The difference between almond flour and almond meal

Although the terms ‘almond flour’ and ‘almond meal’ are often used interchangeably, strictly speaking they do refer to somewhat different things. Both are made from ground almonds, but they do differ slightly in terms of their preparation, composition and texture.

Almond flour is made from blanched, peeled almonds – that is, from almonds that have had their skins removed. Consequently, it’s off-white in colour and lacks the dark brown specks of the skins. It has a fairly fine texture and it’s therefore ideal for a wide variety of bakes. So, almond flour is just finely ground blanched almonds.

Almond meal is typically made from skin-on, unpeeled almonds (that haven’t been blanched) and it’s therefore darker in colour. It can vary in coarseness, from the a fairly fine, powdery texture to a slightly coarser texture. 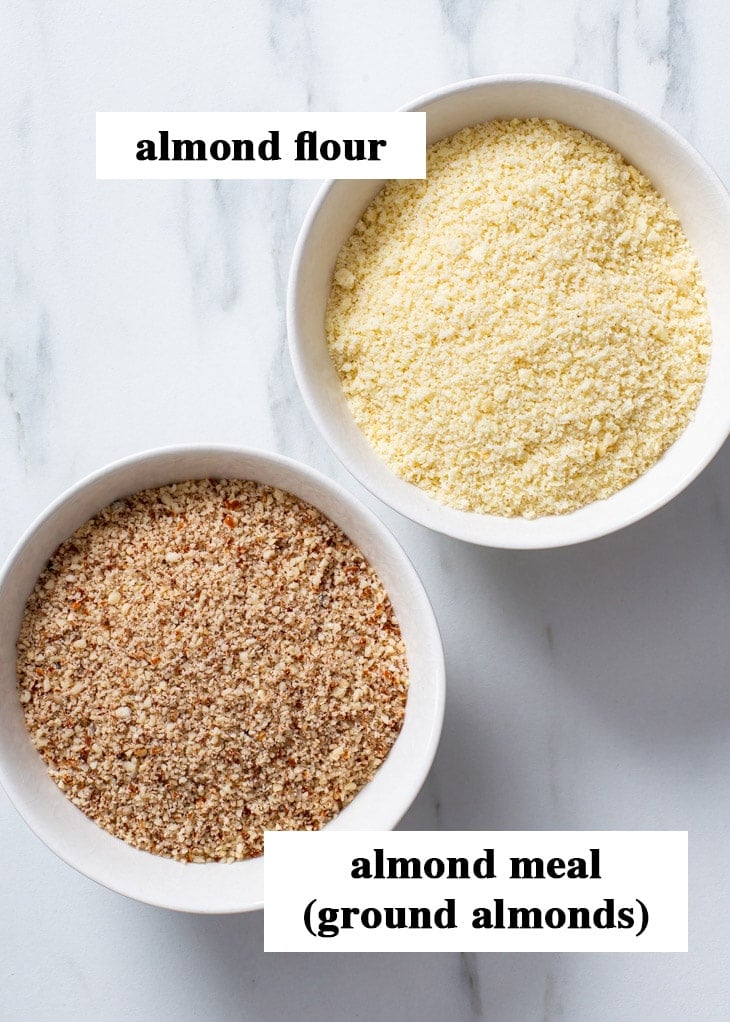 Things get slightly more complicated because many people and brands use the terms ‘almond flour’ and ‘almond meal’ interchangeably, and also make a distinction between blanched vs natural almond meal/flour. This is specifically true for Bob’s Red Mill – you can read more about it here.

In the specific case of Bob’s Red Mill, they used to call (the article above is from 2014) almond flour ‘almond meal’ because of the terminology difference between a “flour” and a “meal”.

Let me explain: when it comes to milling, “flour” is the finest grind possible – it’s basically the powder-like texture of regular wheat flour. In comparison, “meal” is coarser than flour, but finer than grits or polenta. Almond flour will always be coarser than regular wheat flour. If you were to try to grind it as finely as wheat flour, you’d end up with almond butter. So, strictly speaking, because you can’t grind almonds all the way to the actual “flour” texture, it’s actually a “meal”.

However, looking at the current Bob’s Red Mill product listings, they no longer use the term “meal” – instead, they call all ground almond products ‘almond flour’.

The difference between almond flour and ground almonds

As mentioned above, almond flour is made from blanched, peeled almonds that have had their skins removed. It’s fairly fine in texture and light in colour, lacking the darker specks from the skins.

Ground almonds, on the other hand, are the same thing as almond meal – they’re just ground, skin-on, unpeeled almonds. They’re therefore darker in colour and often coarser in texture.

When in doubt: go by appearance

Now, all this is well and good, but as I mentioned above, many brands and stores use these terms interchangeably. For example, UK stores Sainsbury’s  and Tesco both sell almond flour under the name “ground almonds”. And that can, unfortunately, get very confusing very quickly.

So, when in doubt, just look at what the product looks like – regardless of what it’s called: 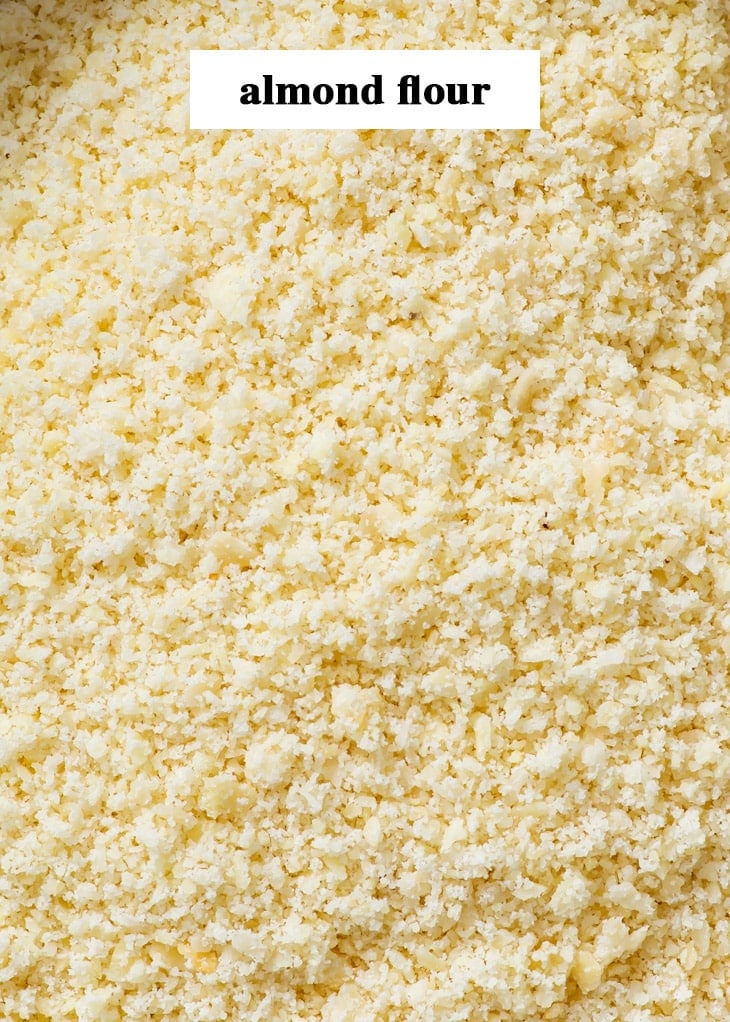 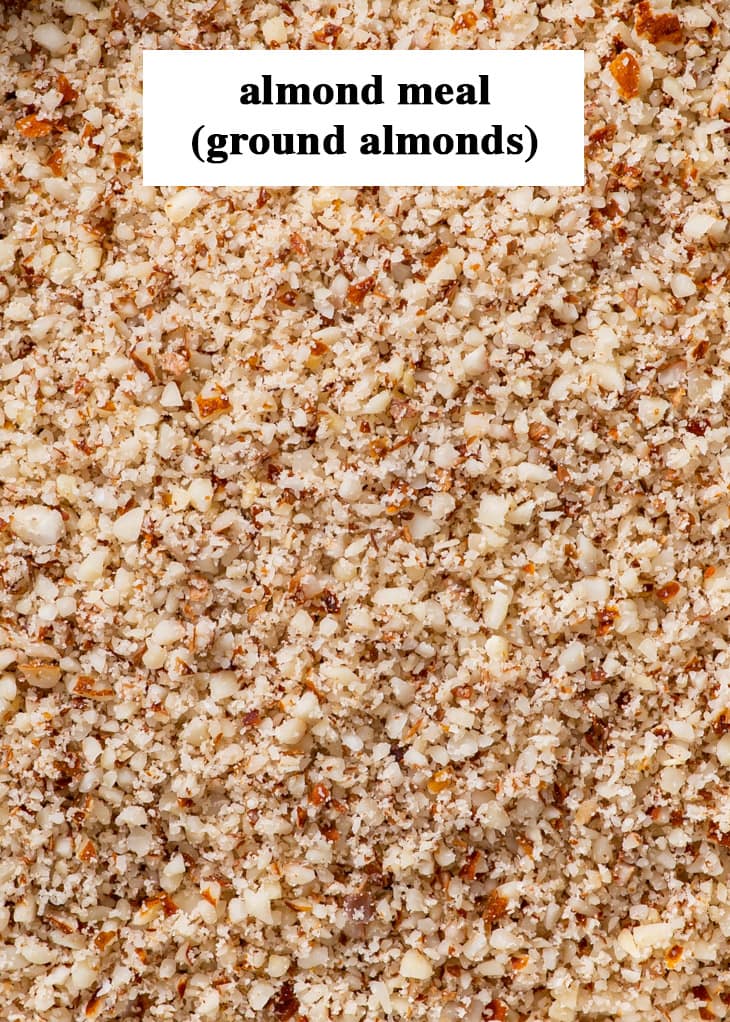 It can play several different roles in gluten free recipes:

Almond flour is also used in other bakes, such as French macarons and joconde sponge. It’s also an excellent addition to energy bars and raw-vegan treats.

Can you substitute almond meal (ground almonds) for almond flour, and vice versa?

In general, you can substitute almond meal (ground almonds) for almond flour, provided that the almond meal is very finely ground. In that case, the substitution shouldn’t in any way affect the texture of the final bake. Note that even if you’ve bought almond meal that’s fairly coarse, you can always process it briefly in a food processor or blender until it’s finer in texture.

However, keep in mind that because almond meal is made from skin-on, unpeeled almonds, it’s darker in colour which will reflect in the final bakes. This isn’t really relevant when it comes to things like brownies or chocolate cake, but it’s worth considering for light-coloured bakes like vanilla cake or cupcakes. If you use almond meal in vanilla cake sponges, they won’t have an even, light, off-cream colour. Instead, you’ll see little dark brown specks in them because of the almond skins.

So, it’s just a question of whether your bake is light in colour and, if it is, whether you’re happy with seeing little brown specks in it.

If, on the other hand, you need coarsely ground almonds for the recipe, then almond flour won’t be a good substitute.

Making homemade almond meal is super straightforward: just place raw, skin-on, unpeeled almonds into the bowl of a food processor or blender and pulse (in about 5-10 second intervals) until you reach the desired texture.

You can either leave the almond meal fairly coarse or take it all the way to a fine, powdery texture – just be careful not to over-blend it, otherwise you’ll be left with almond butter. 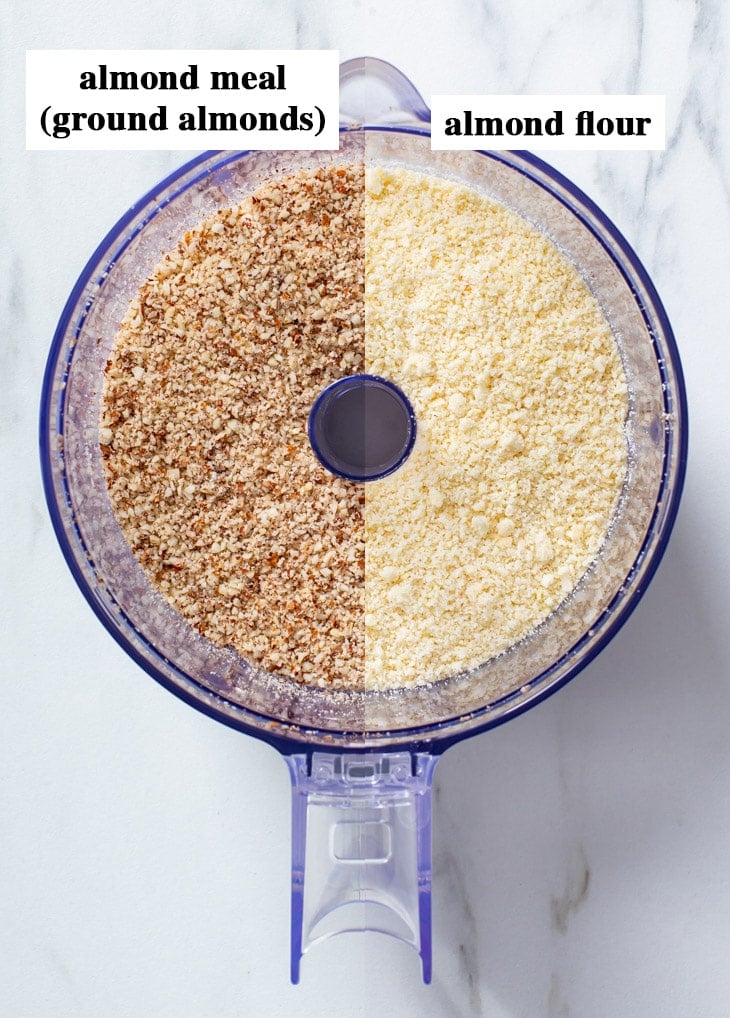 How to make almond flour

To make homemade almond flour, you’ll first need to blanch the almonds to remove the skins. You can read all about how to blanch almonds in under 5 minutes here!

Then, you’ll need to grind the blanched, peeled almonds: place them into the bowl of a food processor or blender and pulse (in about 5-10 second intervals) until you get a fine, powdery texture. Be careful not to over-blend them, otherwise you’ll be left with almond butter.

Here are a few of my favourite recipes that use almond flour and/or almond meal:

If you want to learn more about the fundamentals of gluten free baking, have a look at these blog posts:

I hope this blog post has cleared up some of the confusion around the almond flour vs almond meal vs ground almonds conundrum. Now, whenever you encounter one of these ingredients in a recipe, you should be able to know exactly what it’s referring to and whether you can substitute it for another ground almond product if necessary.

I have plenty more such topics to cover as part of the Gluten Free Baking Basic series, but if you have any specific questions or topics that you want me to focus on, let me know in the comments below!