Skip to content
Order my GLUTEN-FREE cookbook!
About meCookbookContactWork with me
Home » Cornstarch, Corn Flour, Cornflour and Maize Flour: What’s the Difference?

Cornstarch and corn flour are incredibly important ingredients in gluten free baking, and you’ll often see them used in my recipes. However, depending on whether you’re from the US, the UK or elsewhere, you might be confused about the difference between cornstarch, corn flour, maize flour and cornflour. Here, I’m sharing a comprehensive overview of the different milled corn products (including which names refer to the same ingredient) and how they can be used in gluten free baking. 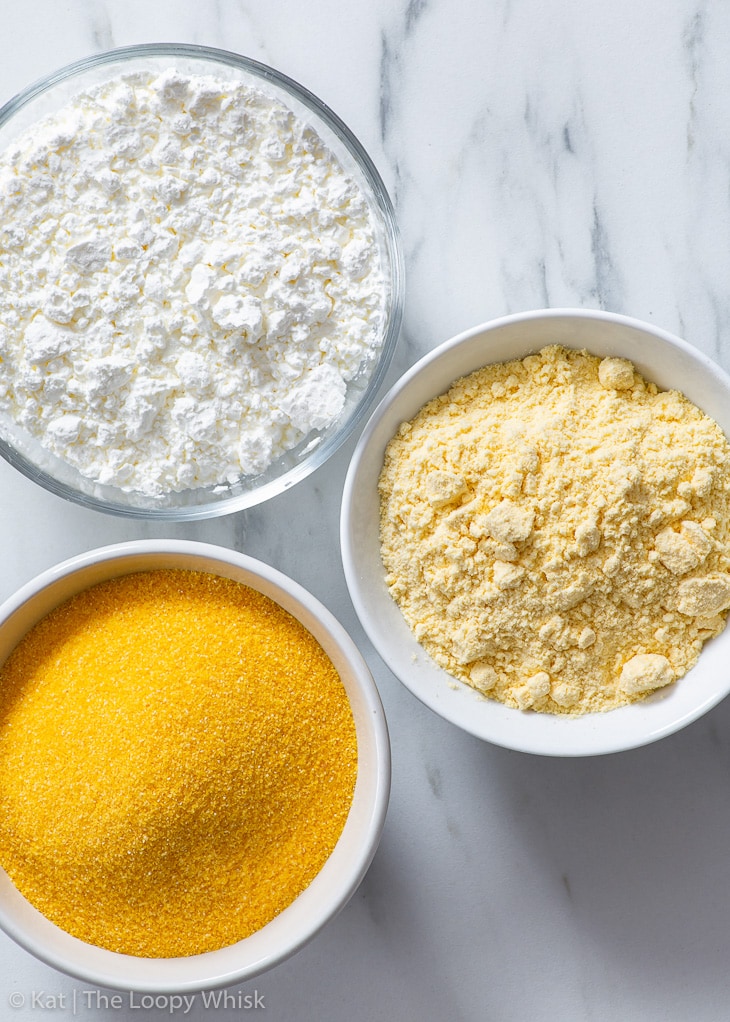 Ever since my book was released in the US back in August, the most common questions I’ve received are: “What is cornflour? What is maize flour? Is maize flour the same as cornstarch? Are corn flour and cornmeal the same thing???”

And I *completely* get it!! The corn flour vs maize flour vs cornstarch terminology difference between the UK and the US is incredibly frustrating and unnecessarily complicated. But I hope that this blog post will clear up any confusion.

Before we get to the bits and bobs of cornstarch vs corn flour – if you like what you’re seeing, subscribe to my newsletter to keep up to date on the latest recipes and tips!

The difference between cornstarch and corn flour

Both ‘cornstarch’ and ‘corn flour’ are terms commonly used in the US.

Cornstarch is obtained by extracting the starch from corn grain, specifically from the endosperm of the kernel. It is almost 100% starch, without any fibre, protein, fat or other components. It’s a very very fine white powder that’s chalky in appearance and that ’squeaks’ when you rub it between your fingers. Cornstarch is often used as a thickening agent to thicken sauces and custards, like for example vanilla pastry cream.

Corn flour is obtained by grinding entire dried corn kernels into a fine powder. It’s basically very finely ground corn meal. In addition to the starch, it also contains fibre, protein and a small amount of fat. There are two types of corn flour: the more common yellow corn flour that’s made from yellow corn, and white corn flour made from white corn kernels. You can technically use the two varieties interchangeably, but whenever I mention ‘corn flour’ in my recipes, I’m referring to yellow corn flour. 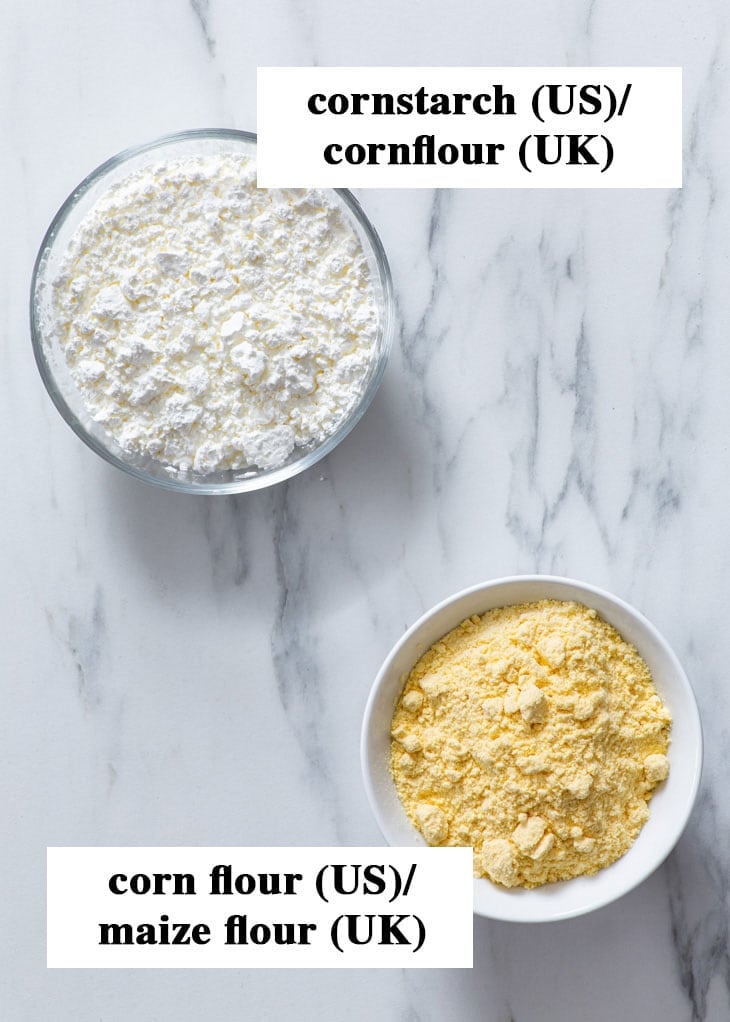 Cornstarch in the US = cornflour in the UK

Here’s where the confusion starts. ‘Cornstarch’ in the US is the same thing as ‘cornflour’ in the UK. It’s the pure starch extracted from corn kernels, and it has the form of a very fine white powder. Note that when referring to the starch, ‘cornflour’ is written as a single word (with no space between ‘corn’ and ‘flour’).

To avoid as much confusion as possible, most of my newer recipes will list this ingredient as “cornstarch (US)/cornflour (UK)” in the ingredients list. But to avoid too much repetition, I’ll be referring to it using the US term ‘cornstarch’ in this blog post.

And the confusion continues… because ‘corn flour’ in the US is the same thing as ‘maize flour’ in the UK. (Note the space between the words ‘corn’ and ‘flour’!) Here, we’re referring to the yellow flour that’s made by grinding dried whole corn kernels. That is: it’s basically just finely ground corn meal.

The names ‘corn’ and ‘maize’ can be used interchangeably, but ‘corn’ is more commonly used in North America, whereas ‘maize’ is often used in the UK – but they are referring to the same thing.

To avoid as much confusion as possible, most of my newer recipes will list this ingredient as “corn flour (US)/maize flour (UK)” in the ingredients list. But as with cornstarch, I’ll be using the US name ‘corn flour’ in this blog post, just to avoid too much repetition. 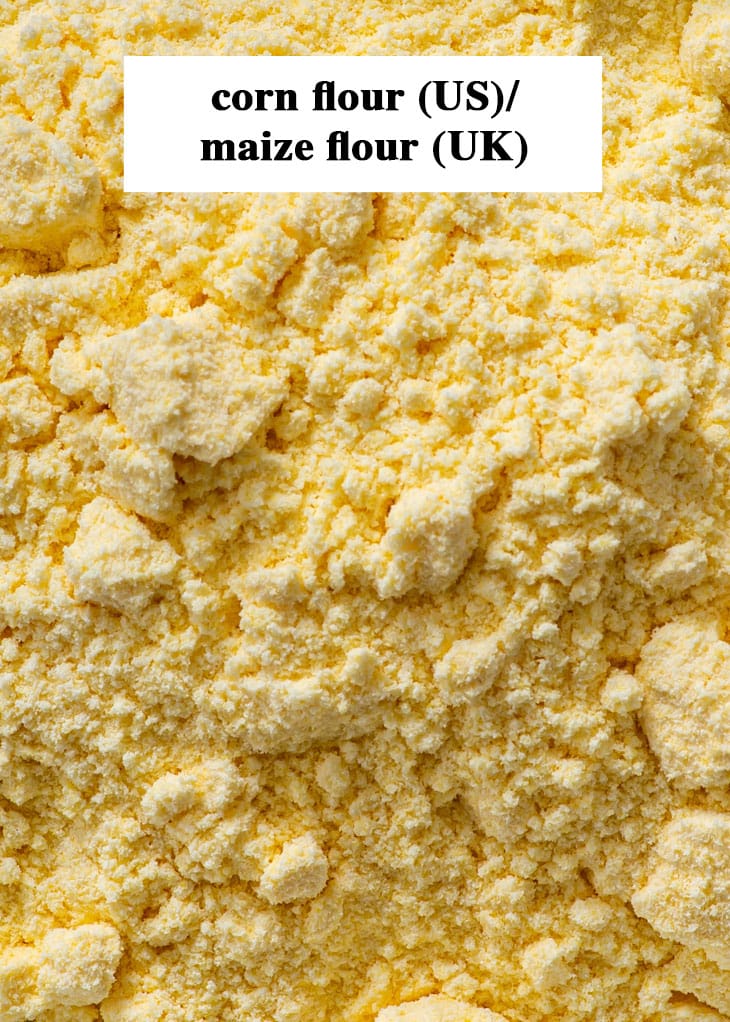 Cornstarch is a ‘starchy’ gluten free flour. That means that it gives gluten free bakes their fluffiness and airiness, but it doesn’t contribute much to their taste or structure. It can be substituted with an equal weight of arrowroot starch, potato starch or tapioca starch.

Corn flour is a ‘protein’ gluten free flour. It adds flavour and structure to gluten free bakes – although the amount of structure it provides is pretty negligible compared to that achieved by “regular” wheat flour. It can be substituted with an equal weight of light buckwheat flour, sorghum flour, white teff flour or oat flour (the latter only if you’re not sensitive to oats).

In general in gluten free baking, the aim is always to find the correct balance or ratio of starchy-to-protein flours, which will give the best results in terms of texture, flavour and appearance. For example, my homemade gluten free flour blend uses a mix of brown rice flour (a “lighter” protein flour), potato starch (a starchy flour) and corn flour (a protein flour).

Note that in all my recipes that list corn flour (US)/maize flour (UK) as an ingredient, I’m referring to yellow corn flour, as that’s what I always use.

The difference between corn flour and cornmeal (polenta)

The difference between corn flour and cornmeal is just their coarseness or how finely they’ve been ground/milled. They’re both made from whole dried corn kernels but have completely different textures.

Cornmeal is more coarsely ground, so it feels gritty. It’s commonly used to make cornbread, but it’s not a suitable replacement for corn flour in gluten free recipes.

Corn flour is more finely ground, and it has a fine, floury texture.

Polenta is very similar to cornmeal, especially coarse-ground cornmeal. However, authentic polenta is made from a very specific, heirloom variety of corn called eight-row flint or otto file in Italian. It’s also milled slightly differently from cornmeal, which results in a different, heartier mouthfeel. 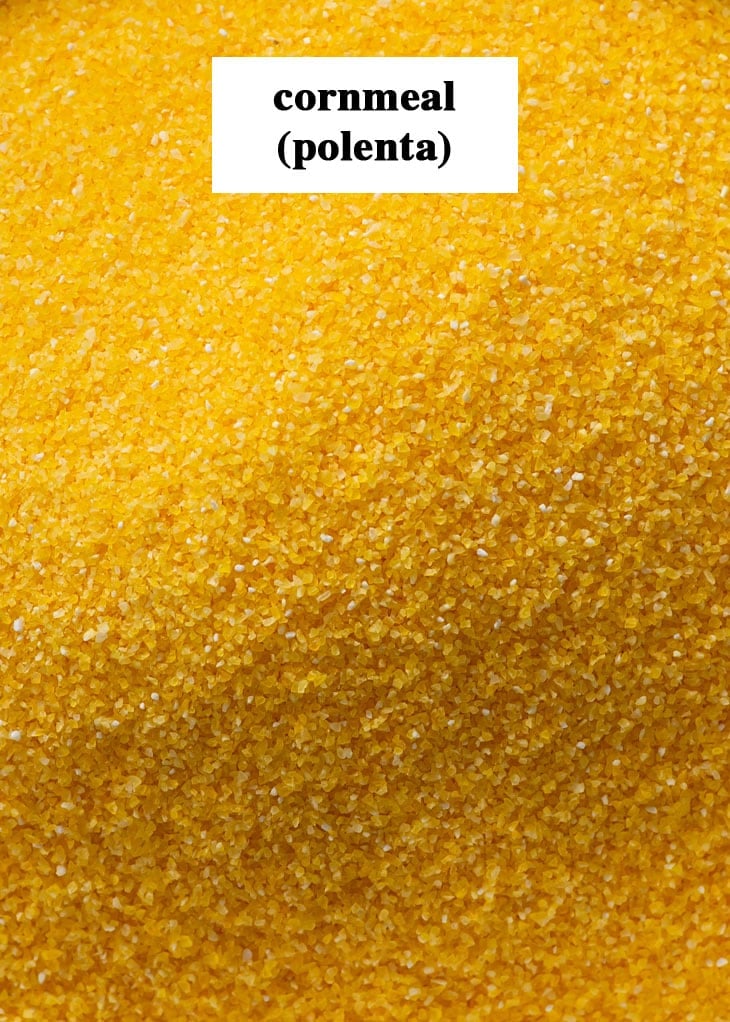 The difference between corn flour and masa harina

Note that while both corn flour and masa harina are flours made from corn, masa harina is milled from corn kernels that have been soaked in a slaked lime (calcium hydroxide) solution to remove the hull. In Spanish, the name ‘masa harina’ means “dough flour” and it’s used to make corn tortillas, tamales and other Latin American dishes.

Can you substitute cornstarch for corn flour (and vice versa)?

That means that you can’t substitute cornstarch for corn flour, or vice versa.

Instead, if you don’t want to use cornstarch in a recipe, you can use an equal weight of arrowroot starch, potato starch or tapioca starch instead.

If you need a good corn flour substitute, you can use an equal weight of light buckwheat flour, sorghum flour, white teff flour or oat flour (the latter only if you’re not sensitive to oats).

If you’re interested in learning more about these corn-based products, here are a few articles that I’ve found helpful and interesting. And, of course, I encourage you to do your own research (just make sure to use good quality, reputable sources)!

If you want to learn more about the fundamentals of gluten free baking, have a look at these blog posts:

I hope this managed to clear up the difference (or the lack of a difference) between cornstarch, corn flour, cornflour and maize flour – so that you can now confidently approach any and all recipes that use them.

I have plenty more such topics to cover (the list of posts that I still need to write up is pretty much endless), but if you have any specific questions or topics that you want me to focus on, let me know in the comments below!