Skip to content
Order my GLUTEN-FREE cookbook!
About meCookbookContactWork with me
Home » Vegan Bakewell Tart

This post has been created in collaboration with Nature’s Charm. All opinions expressed in the post are my own… plus, there’s a whole lotta deliciousness ahead – so read on. (For more information you can check out my Disclosure Policy.) 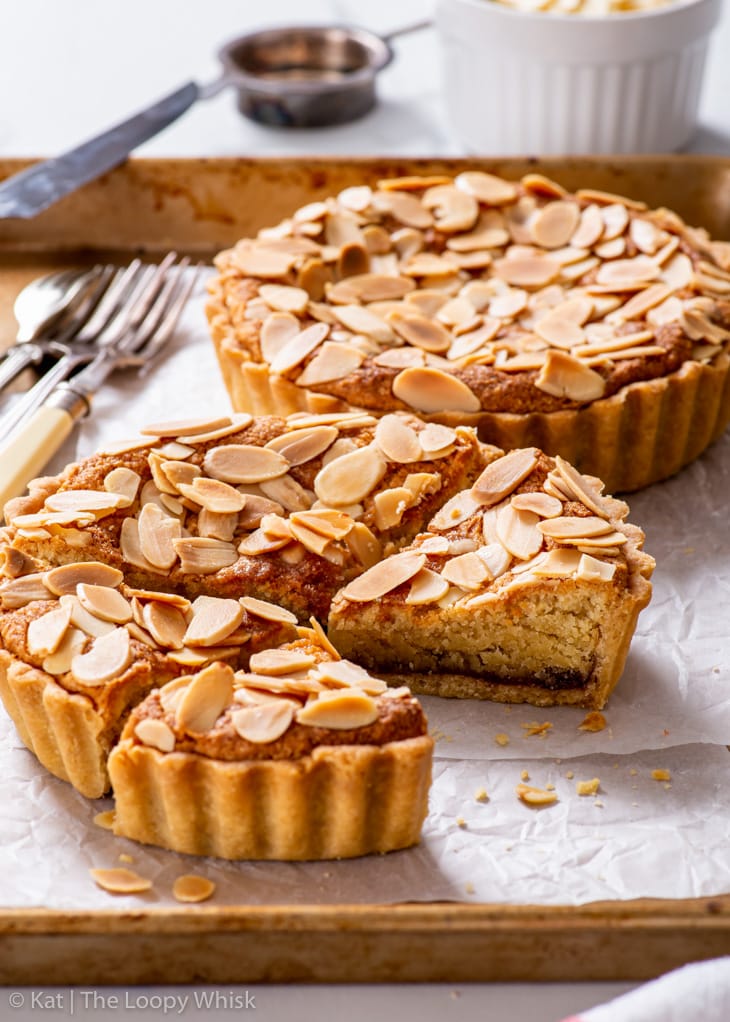 Today’s offering is one of my all-time favourite vegan desserts. I genuinely adore this vegan Bakewell tart. So much so that I may have tested this recipe more times than was strictly necessary… what can I say, it’s just so very delicious.

From its crisp, melt-in-the-mouth vegan shortcrust pastry to the gooey vegan frangipane filling, everything about it is just spot on. A thin layer of raspberry jam on the bottom brings a slight tart freshness to it, which really elevates the whole dessert. And then, of course, there’s the crunch of the flaked almonds on top, which get gently toasted as the tart bakes in the oven.

The whole thing is basically one giant flavour and texture explosion, and you’ll love it. (Plus, as with all my vegan bakes: no egg replacements needed!!)

My favourite part of this vegan dessert is, without a doubt, the fudgy-gooey almond frangipane. It’s rich and decadent – largely thanks to the Nature’s Charm Sweetened Condensed Coconut Milk. 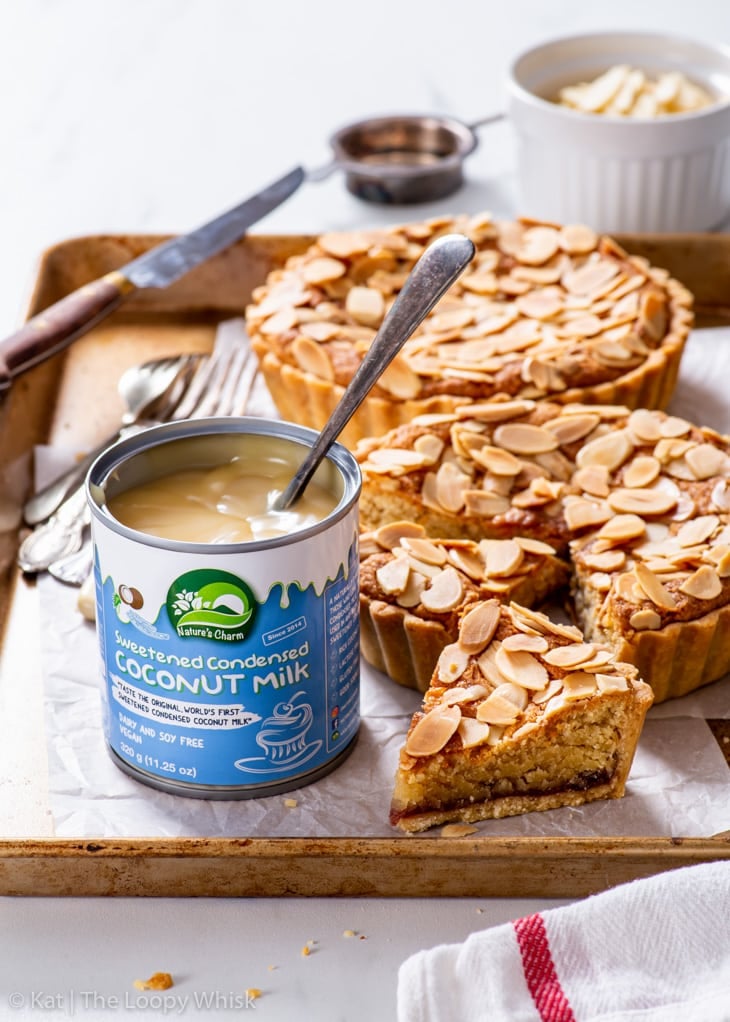 If you’ve been round these parts before, then you know that I’m a big fan of Nature’s Charm amazing vegan, coconut-based products. I’ve used them in numerous of my recipes, like the Vegan Chocolate Sheet Cake, Vegan Chocolate Babka and Vegan Chocolate Raspberry Cake.

So, I’m super excited to share another recipe featuring their wonderful products with you! And this one just might be my favourite so far. 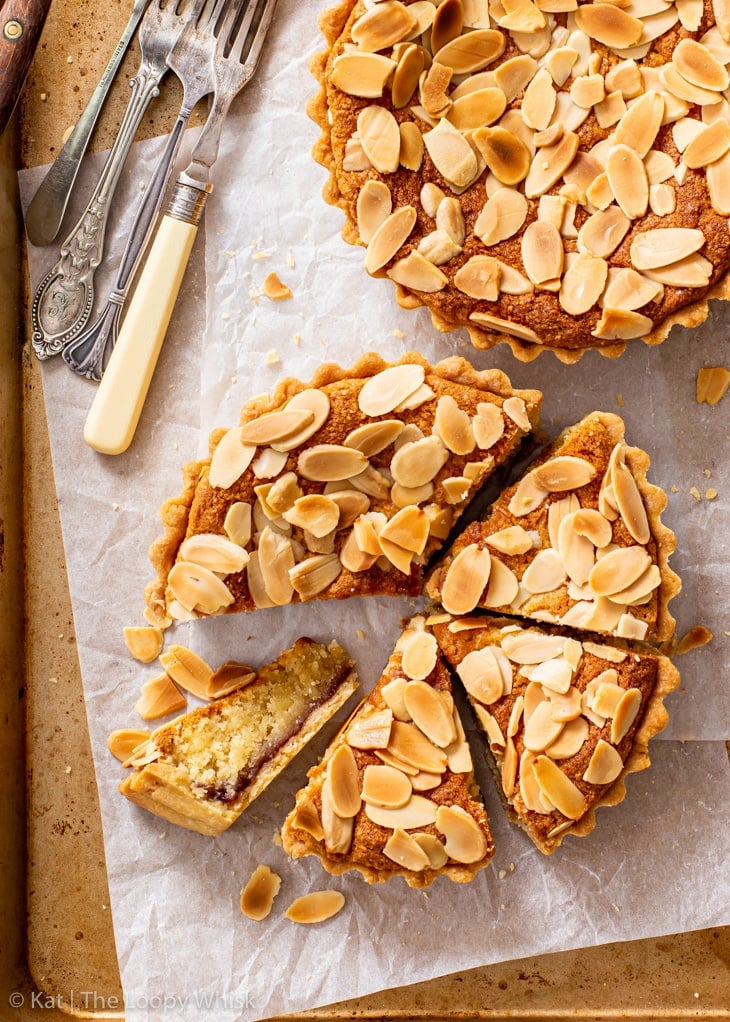 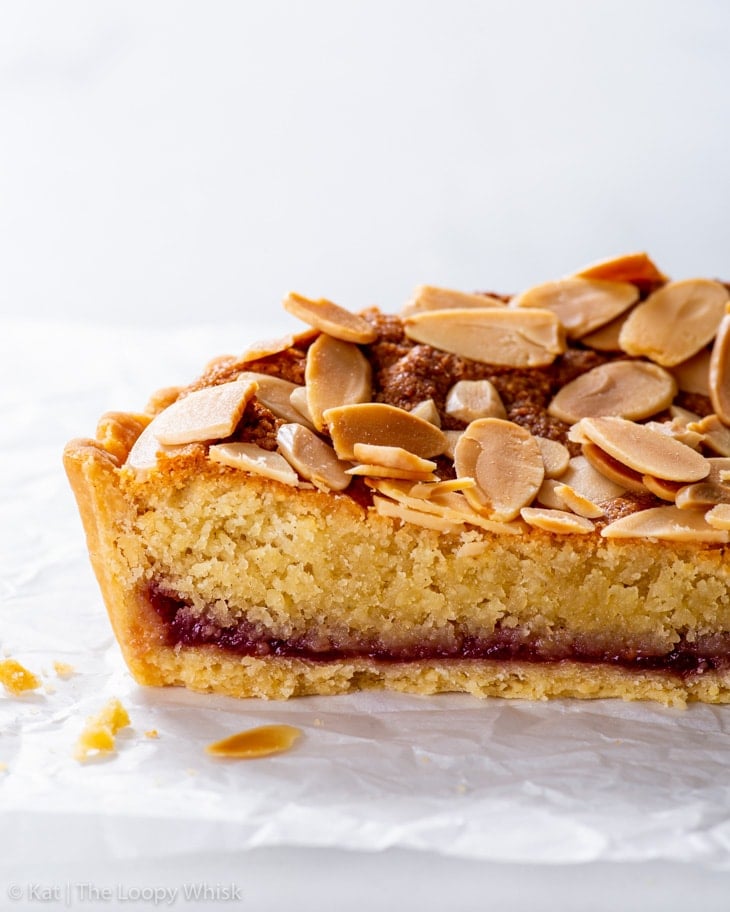 Before we get to the bits and bobs of making this wonderful vegan tart – if you like what you’re seeing, subscribe to my newsletter to keep up to date on the latest recipes and tips!

How to make a vegan Bakewell tart

It turns out that making a vegan Bakewell tart is actually incredibly simple. You don’t need any special equipment (no stand or hand mixer, no food processor) and most of the ingredients are just your everyday vegan pantry staples.

First up: the vegan shortcrust pastry. I’ll just give you a quick overview of how to make it here, with more details in the recipe below – but I’ll also share a more detailed blog post on the topic soon (with plenty of step-by-step photos and troubleshooting tips).

Don’t be tempted to omit the almond flour, as it prevents the pastry from being too tough and hard once baked. The ratio of almond flour to all-purpose flour here is perfectly optimised to give a tart shell that’s study enough to hold the fillings, while also crumbly and delicate enough to be a joy to eat.

To make the vegan shortcrust pastry:

Then, roll it out (no need to chill in between), transfer it into the tart tins, cut away any excess pastry and chill in the fridge. Once chilled, dock the bottom of the tart shells with a fork and blind bake until light golden.

Note that you shouldn’t blind bake the shortcrust pastry all the way to dark golden brown, as the pastry will bake for a second time after you’ve added the frangipane filling. 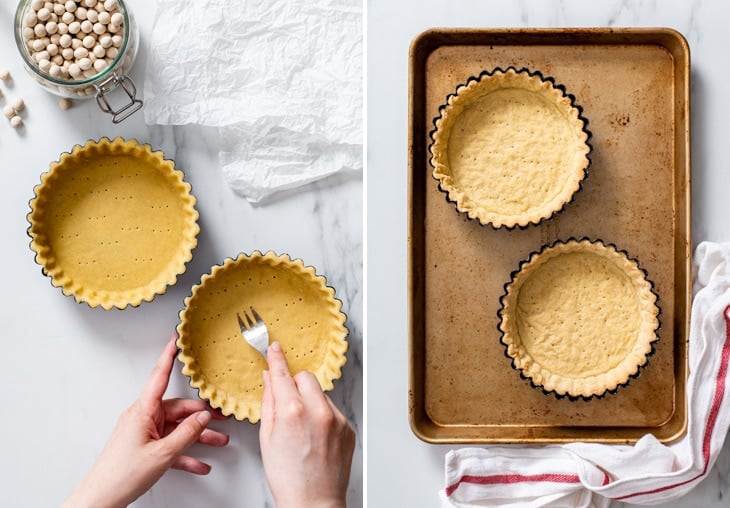 Next up, we have the almond frangipane filling. It’s just as easy to make as the pastry – honestly, the most difficult part is resisting the temptation to just attack it with a spoon and forget all about baking it! (Yes, I’m most certainly speaking from personal experience here.)

Here’s how to make it:

Once you have all your components ready, it’s time to assemble and bake the vegan Bakewell tarts. Note that the blind baked tart shells should be warm or cooled completely to room temperature before you start filling them.

To assemble the vegan Bakewell tarts:

How long do you have to bake a vegan Bakewell tart?

Baking these vegan Bakewell tarts proceeds in several stages, all at 350ºF (180ºC) in a non-fan/conventional oven on the middle oven rack:

So, the vegan Bakewell tarts bake for a total of about 55 minutes to 1 hour 5 minutes.

As always, make sure to pay attention to the physical indicators (the colour of the pastry, the toothpick test, and so on) rather than relying on the baking times listed in the recipe. Depending on how your oven is calibrated (that is, if it runs a bit hot or cold), the tarts might take shorter or longer to bake. 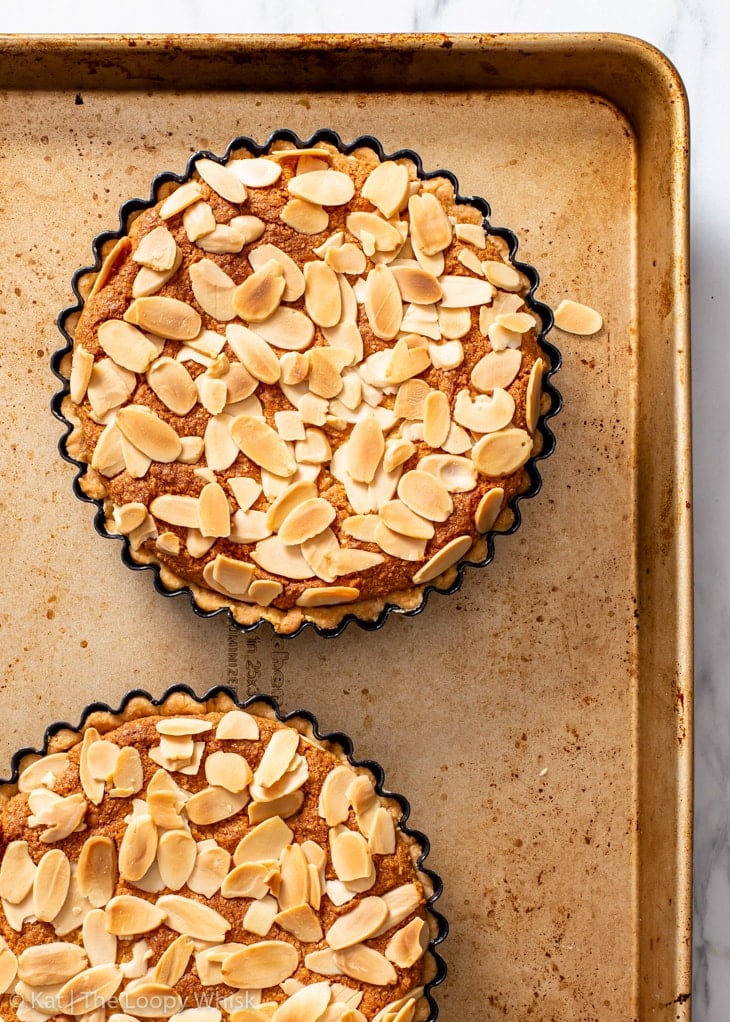 Can you scale up this recipe to make one large tart instead?

Yes!! You can definitely scale up the recipe – in the Notes section of the recipe below, I’ve included the quantities and baking time required to make one 9 inch (23cm) vegan Bakewell tart. It’s just as easy to prepare as the two smaller tarts, and also just as delicious.

And that’s it for today, friends! This covers everything you need to know to make THE MOST AMAZING vegan Bakewell tart! It’s a really easy and straightforward recipe, with truly mouthwatering results.

I hope you’ll love it as much as I do. 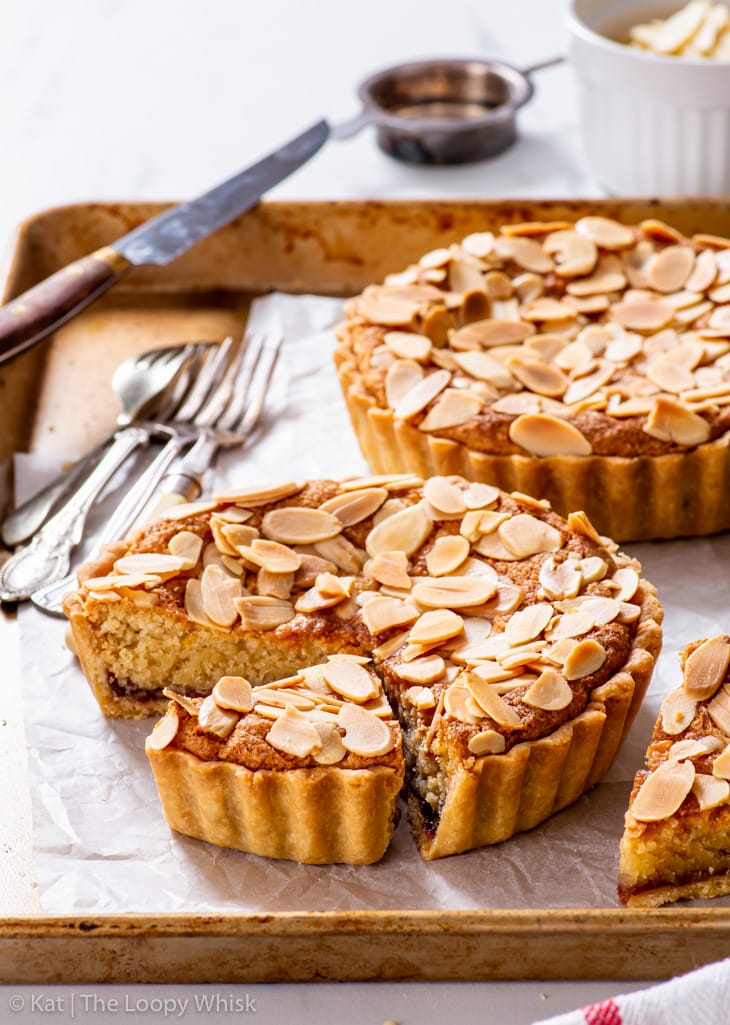 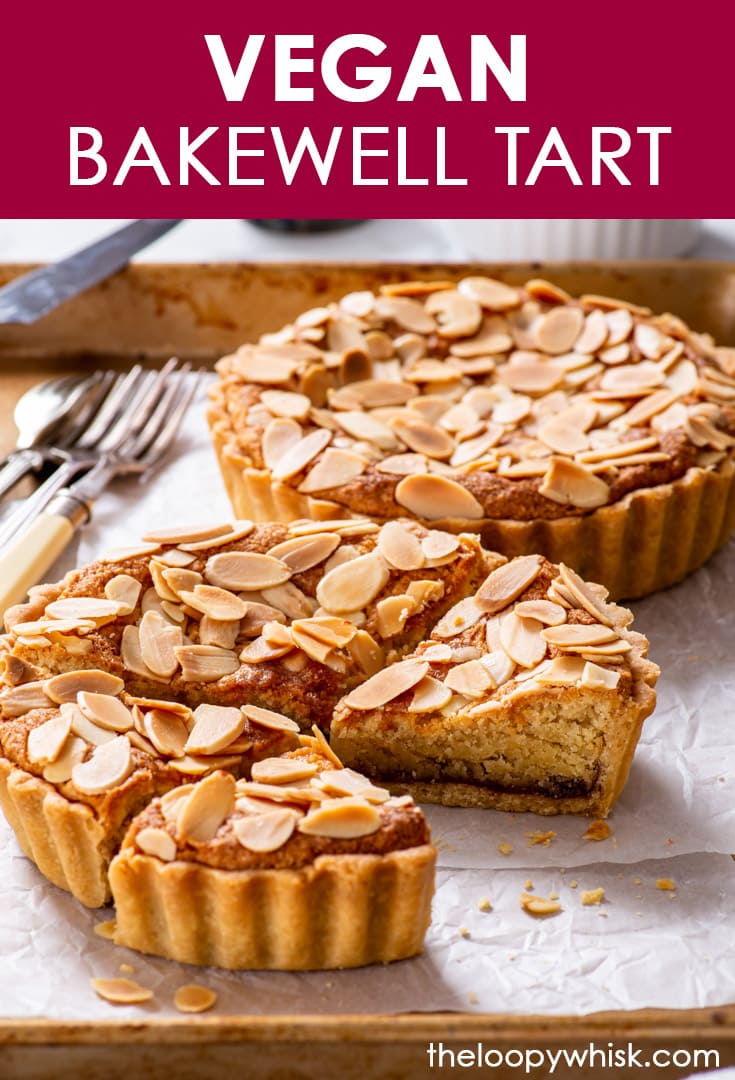 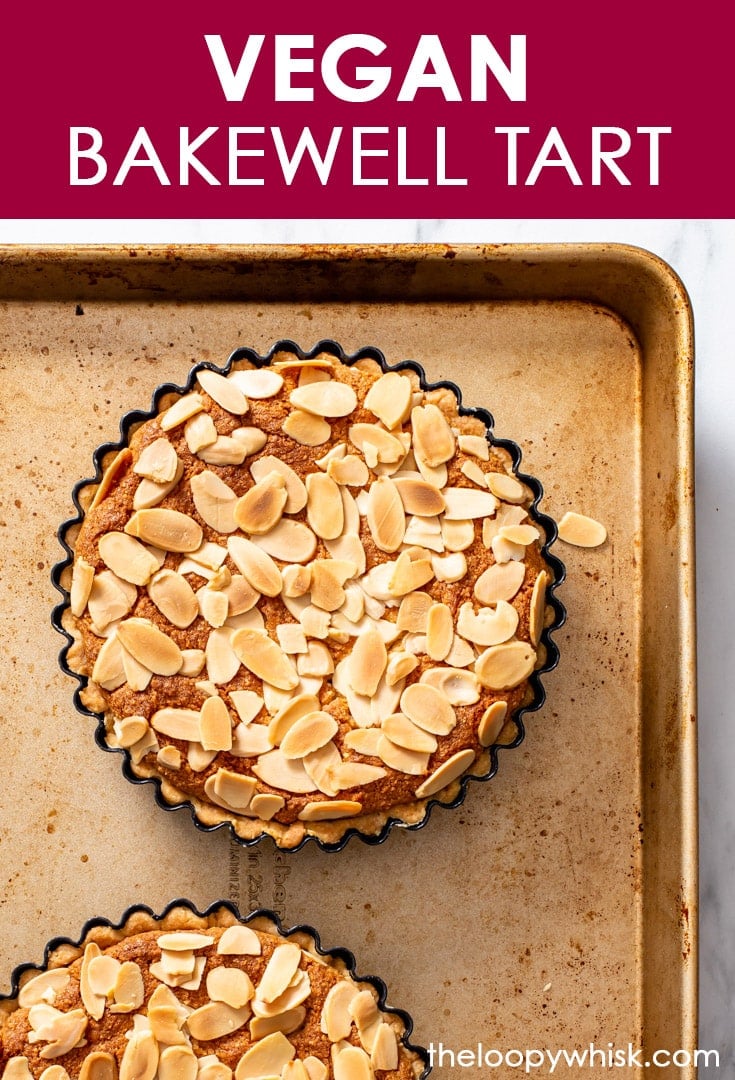