Skip to content
Order my GLUTEN-FREE cookbook!
About meCookbookContactWork with me
Home » Easy Baked Raspberry Cheesecake

You’ll love this incredibly rich and creamy baked raspberry cheesecake. It has the most amazing intense raspberry flavour and the raspberry sauce it a total revelation, adding a wonderful tangy freshness and transforming the cheesecake into a truly unforgettable dessert. It’s also incredibly easy to make, no water bath and no stand or hand mixer needed! 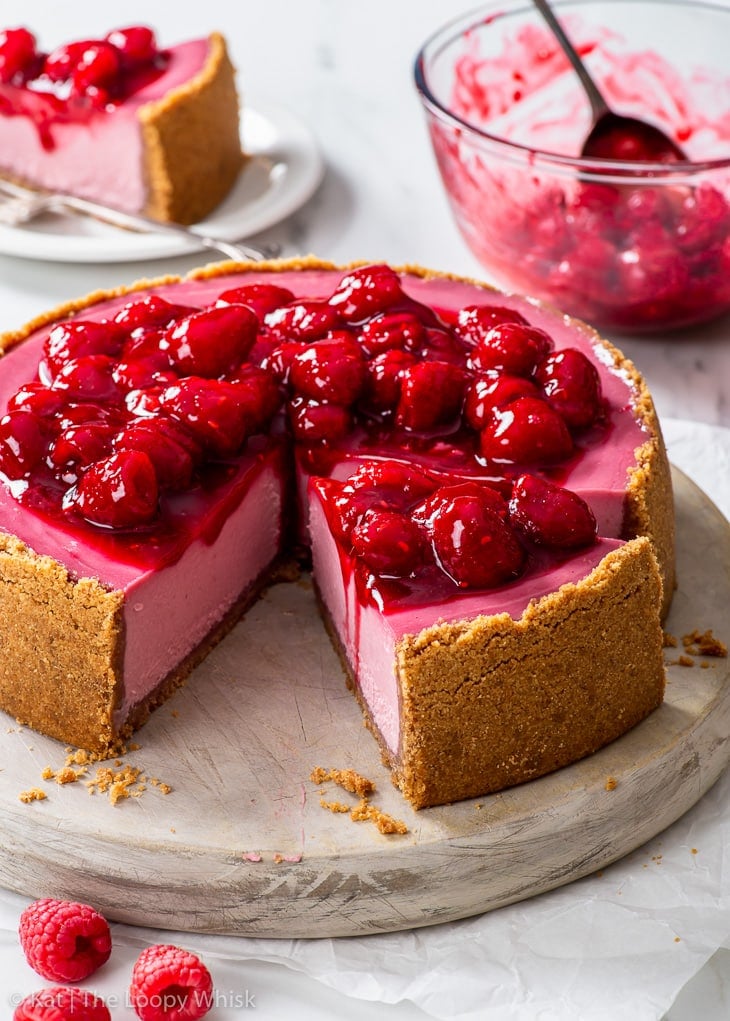 I’m pretty sure that this is the most luxuriously decadent raspberry cheesecake you’ll ever try. I know I’m incredibly biased, but this cheesecake is so incredibly delicious, I honestly don’t think there’s any way of improving it.

It ticks every single box:

And if all of that doesn’t convince you, just take a look at this luscious slice of raspberry cheesecake perfection: 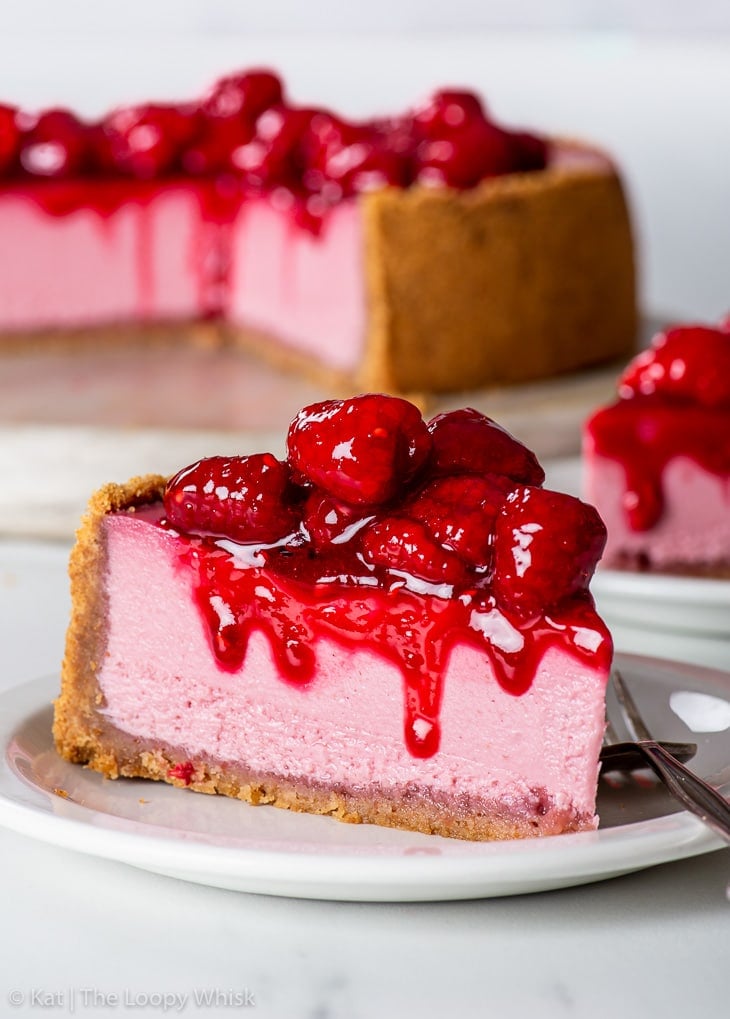 Before we get to the bits and bobs of making this wonderful cheesecake – if you like what you’re seeing, subscribe to my newsletter to keep up to date on the latest recipes and tips!

How do you make baked raspberry cheesecake from scratch?

Making this raspberry cheesecake from scratch couldn’t be easier. You don’t need any special equipment – no stand or hand mixers and no water bath either. Just a large bowl, a balloon whisk, a few other kitchen essentials, and that’s it.

(Of course, if you want to use a stand mixer, that’s perfectly fine. You’ll need the paddle attachment, and always use the lowest speed setting to avoid whipping too much air into the mixture. I also don’t recommend using a hand mixer – but more on that below!)

Next up, prepare the raspberry cheesecake filling: 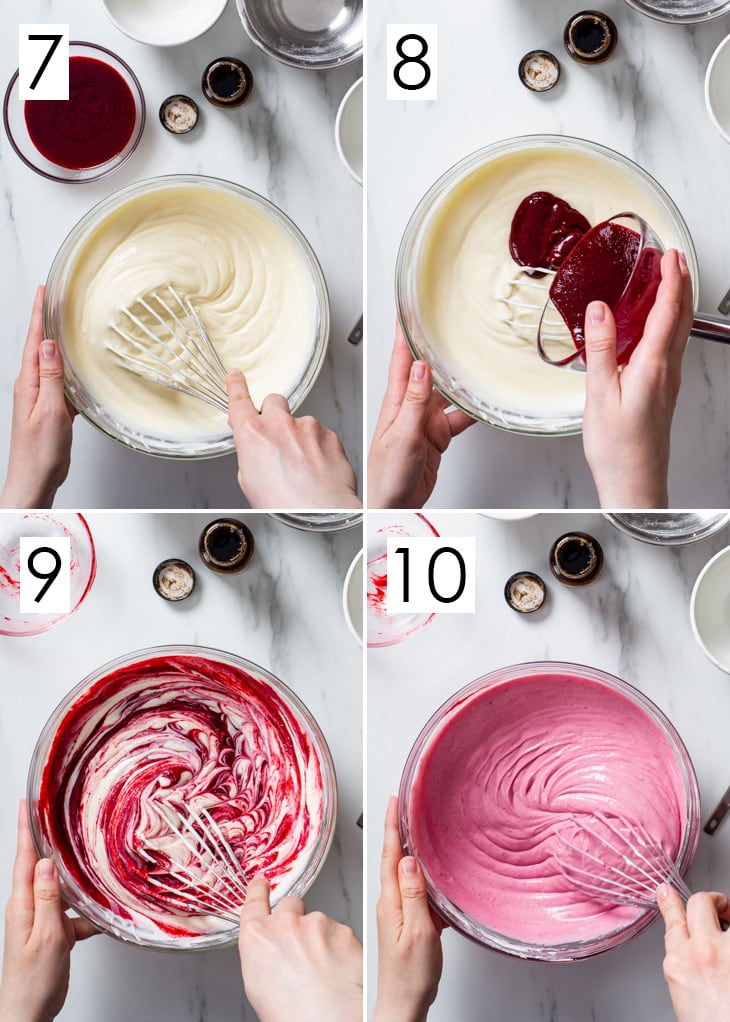 Assembling and baking the raspberry cheesecake:

Do you really need a water bath to bake a cheesecake?

NO!!! I know that using a water bath is highly popular in cheesecake baking, but I’m personally not a fan – for two reasons. First up, it’s fussy and messing about with boiling hot water is just not fun. And if you’ve been round these parts before, you know that I’m all about no-fuss baking.

Secondly, I don’t like the texture of cheesecakes prepared using a water bath. This is very much a personal preference, but to me it’s much too smooth – almost like eating a mouthful of straight-up cream cheese.

The good news is that I’ve developed an incredibly simple method for reliably preparing crack-free cheesecakes (and cheesecake bars) without using a water bath. Read on to learn all about it!

How do you prevent your cheesecake from cracking without a water bath?

I actually developed what is now my go-to cheesecake baking method while I was writing my debut cookbook, Baked to Perfection – which you can read more about and order here.

So, to prevent your cheesecake from cracking WITHOUT a water bath:

That’s it! Now, I know that this might seem like a very long and slightly overwhelming list of ’do’s and ‘don’t’s, but trust me – it’s actually incredibly straightforward, as well as 100% reliable and reproducible! In fact, I’ve used this same method to prepare my Blueberry Cheesecake, Triple Chocolate Cheesecake and White Chocolate Cheesecake recipes, and they all tuned out PERFECT.

You need to chill the cheesecake for at least 4 hours (or preferably overnight) before removing it out of the springform pan onto the serving plate. Then, you could serve it as is, but I really really recommend that you also make the raspberry sauce to go on top. It’s divine and takes this cheesecake to a whole new level of deliciousness. 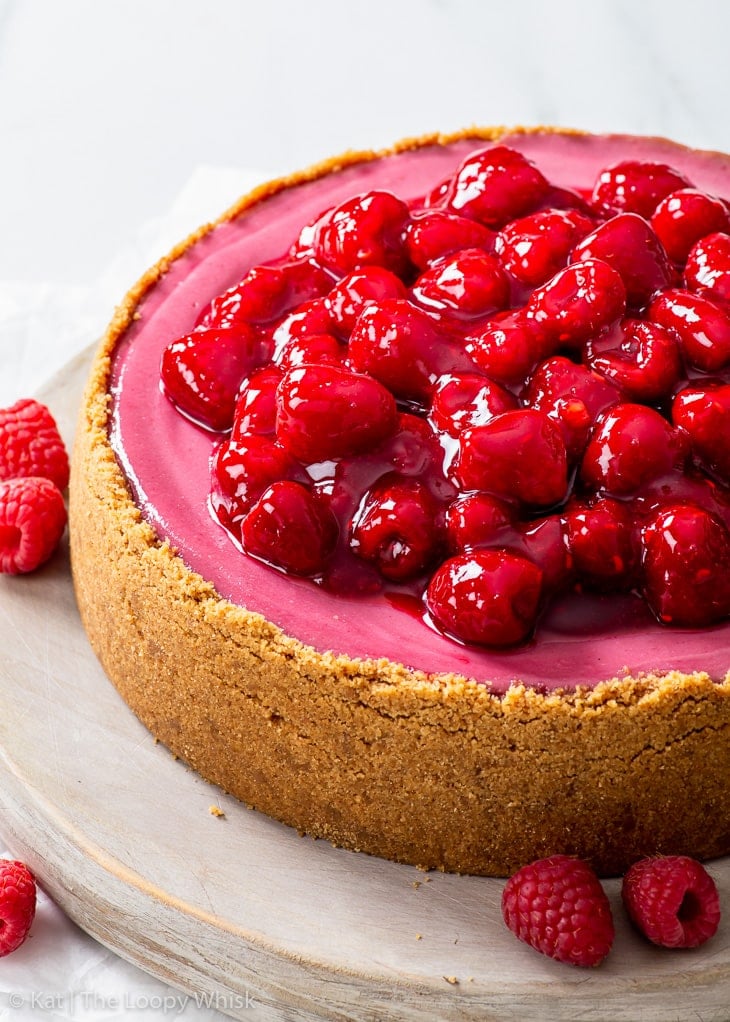 How do you make the raspberry sauce?

The great thing about this raspberry sauce is that you get all of the intense flavour and sweetness from what it essentially a concentrated raspberry syrup, as well as all the refreshing tanginess of fresh raspberries. It’s really the best of both worlds – and it’s incredibly easy to make!

To make the raspberry sauce:

How long does raspberry cheesecake last?

The cheesecake keeps well in a closed container or wrapped in cling film in the fridge for about 5 days. But, let’s be honest… it really never lasts that long. Not once you have that first bite and you’re hit with the tangy freshness of the raspberry sauce, the rich creaminess of the filling and just the all-round delicious raspberry flavour.

And there you have it, friends. An incredibly easy and 100% reliable recipe to make the most wonderful baked raspberry cheesecake that will blow you away with its luxurious flavour and texture.

I’ve actually finished the very last slice of this cheesecake just a few days ago, and I’m already planning when to make it next. Yes, it’s that good.

I really hope you’ll love it as much as I do. 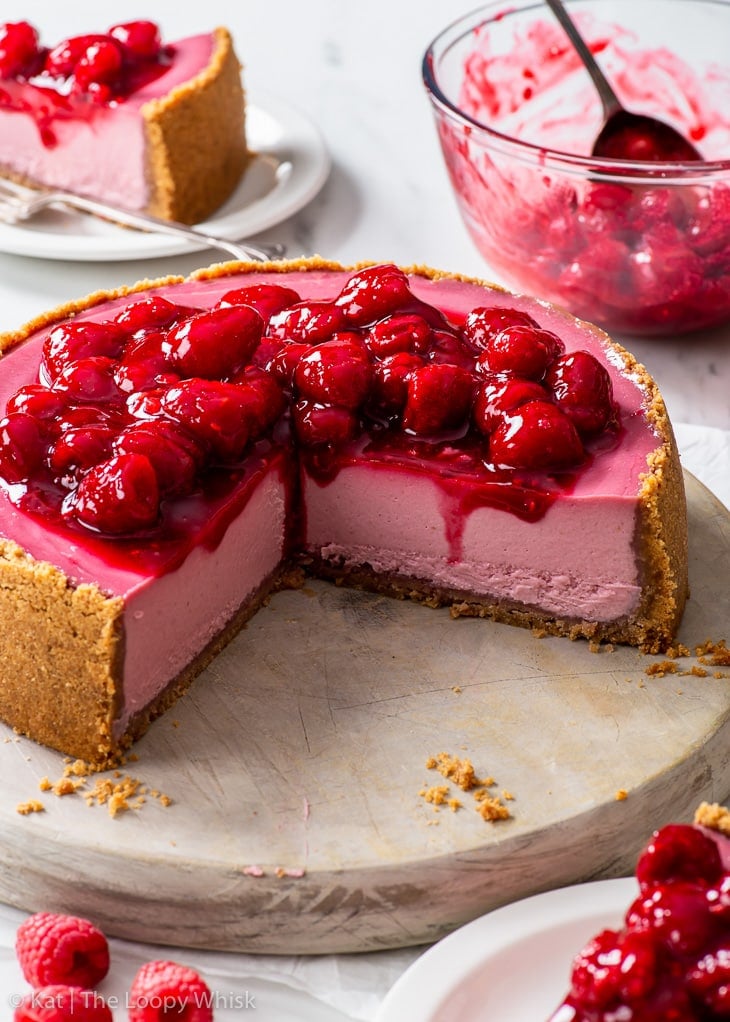 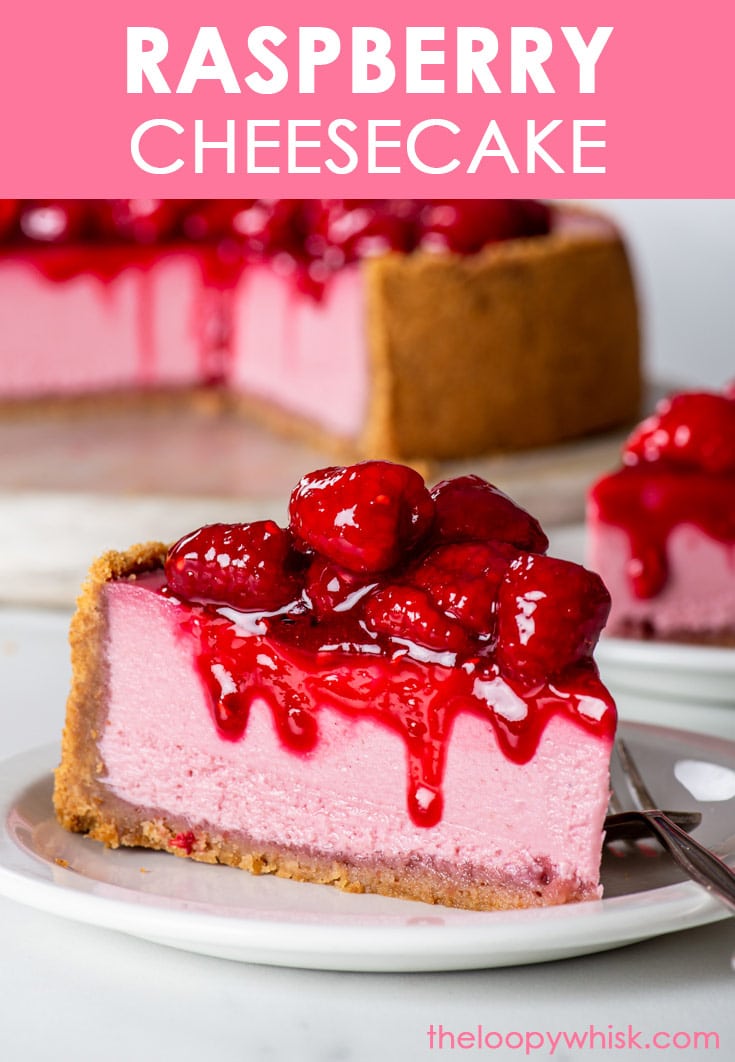 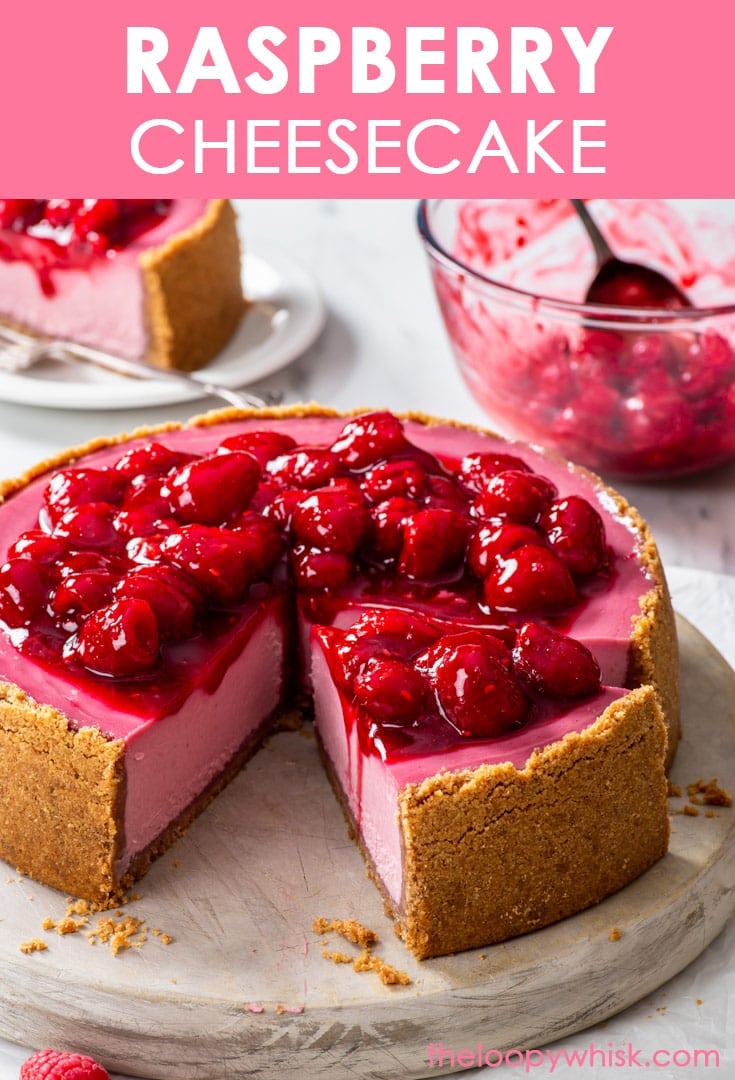 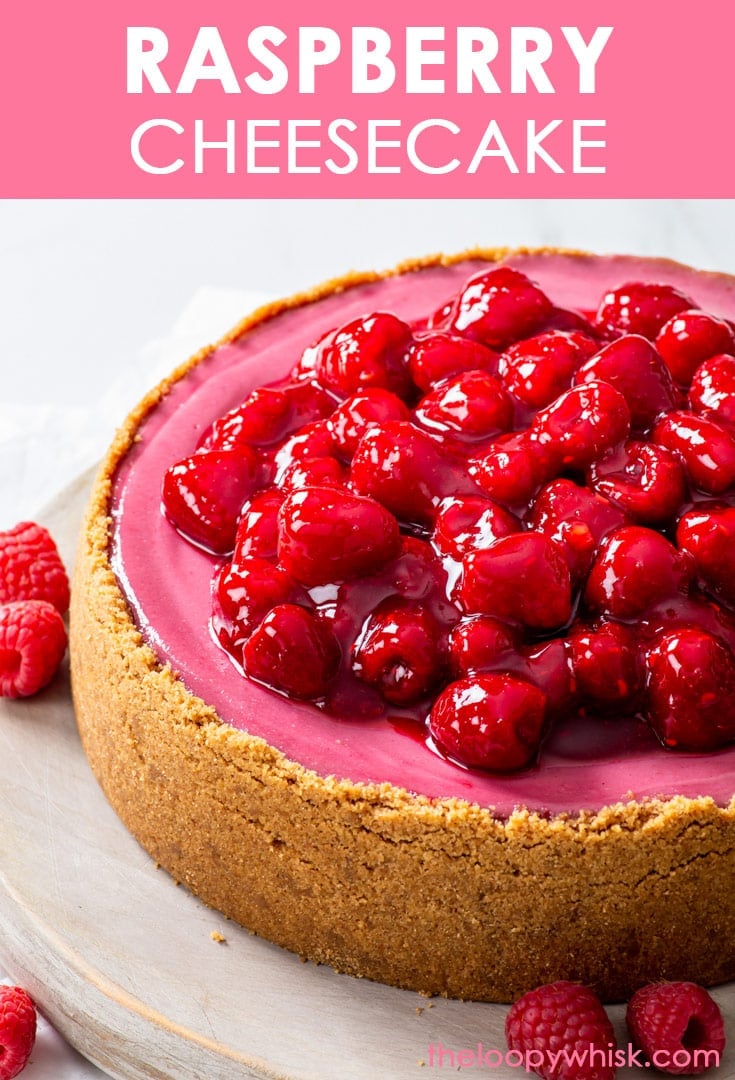