Skip to content
Order my GLUTEN-FREE cookbook!
About meCookbookContactWork with me
Home » Blackberry Cheesecake Bars

These blackberry cheesecake bars are super creamy and simply bursting with flavour, thanks to an abundance of lemon zest and vanilla bean paste in the base cheesecake filling, as well as the aromatic blackberry swirl flavoured with a blackberry reduction. Plus, I’m giving you all the tips and tricks to prevent your cheesecake (bars) from cracking, without using a water bath! 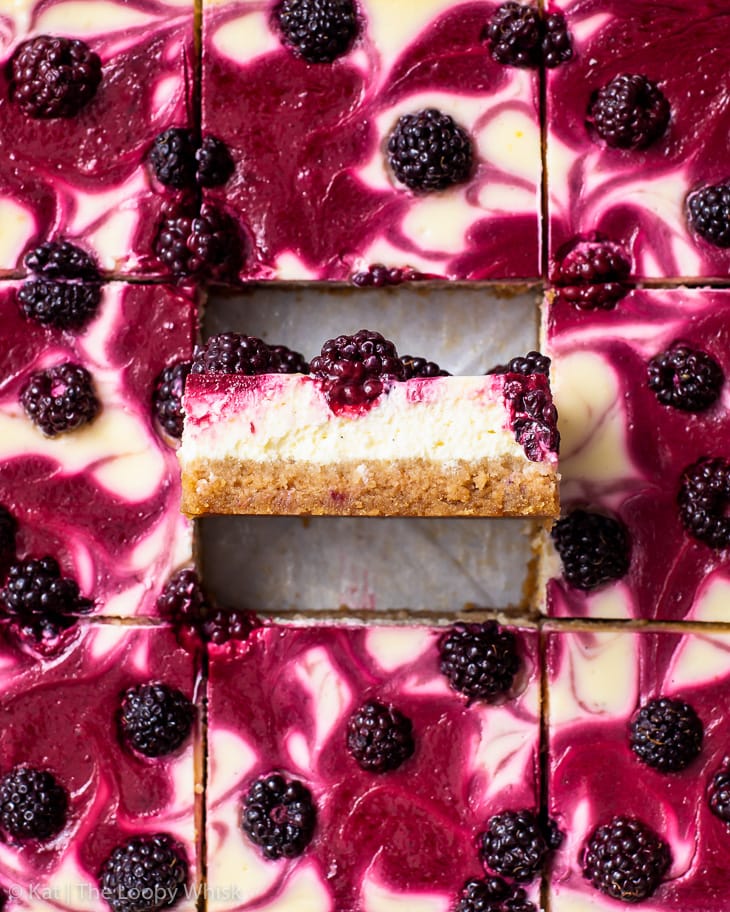 There’s a blackberry bush growing at the bottom of our garden, providing us with an abundance of ripe, juicy blackberries, absolutely bursting with flavour. And while my gluten free blackberry pie used to be my go-to blackberry dessert recipe, it’s been replaced by these glorious cheesecake bars.

They are the result of a rather spontaneous baking impulse – I was craving something creamy and aromatic and refreshing, and not too tricky or labour-intensive to make. And let me tell you: these blackberry cheesecake bars delivered all that and more.

In addition to being insanely delicious, they’re also one of the best looking desserts I’ve ever made. Just look at these beautiful swirls! 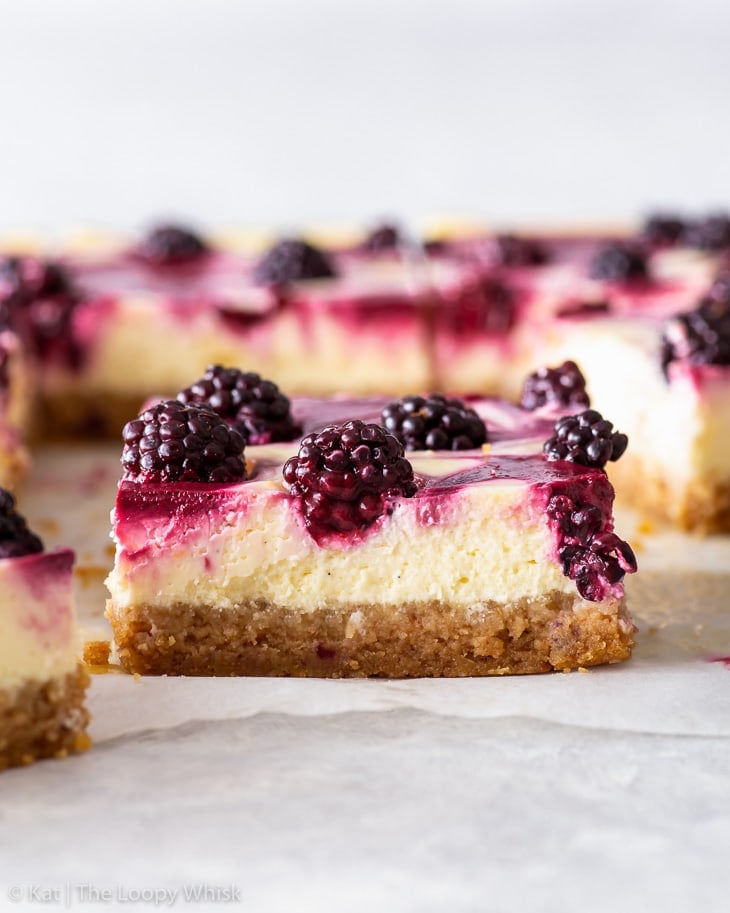 What makes these blackberry cheesecake bars so amazing?

1. The creaminess – These blackberry cheesecake bars are super creamy, without having the mouthfeel of eating pure cream cheese. Instead, they’re light and smooth, and their creaminess pairs beautifully with the buttery crumbliness of the cheesecake crust, as well as the bursts of tangy juiciness from the blackberries.

2. They’re bursting with flavour – First, there’s the butteriness of the cheesecake crust. Then, there’s the base cheesecake filling, flavoured with vanilla bean paste, lemon juice and lots of lemon zest. The blackberry swirl gets its amazing colour and flavour from an aromatic blackberry reduction. And for that extra pop of colour and freshness, whole blackberries are dotted on top. The end result is a refreshing flavour explosion, with the perfect balance of sweetness and zesty tanginess.

3. They’re GORGEOUS – This just might be the prettiest dessert I’ve ever made or eaten. Honestly, it was a close call between baking the bars and just straight up framing them – they’re just THAT gorgeous!!

4. No water bath needed – I don’t like using water baths when baking cheesecakes or cheesecake bars. First of all, they can give the cheesecake a texture that’s a bit too close to that of straight up cream cheese for my linking – a bit too smooth, so that it almost sticks to the roof of your mouth. Secondly, they’re messy. All that boiling hot water is just asking for a disaster to happen, and that’s not even taking into account the possibility of the water leaking into the cheesecake.

Thirdly, and most importantly: it’s just not necessary. As long as you have all your ingredients at room temperature, don’t over-whip your cheesecake filling, and bake the cheesecake (bars) at a low enough temperature, there will be NO CRACKING in sight. Promise. Plus, cheesecake bars are far less likely to crack than a cheesecake (but my method of baking works equally well with cheesecakes).

5. Easy to make – Sure, there’s an extra step of making the blackberry reduction, but that’s as simple as cooking the blackberry juices down until thickened. Overall, these cheesecake bars are truly easy to make… and really FUN to make, as well, what with dotting the colourful blackberry mixture around the creamy white cheesecake filling, and then twirling and swirling it around until just so. 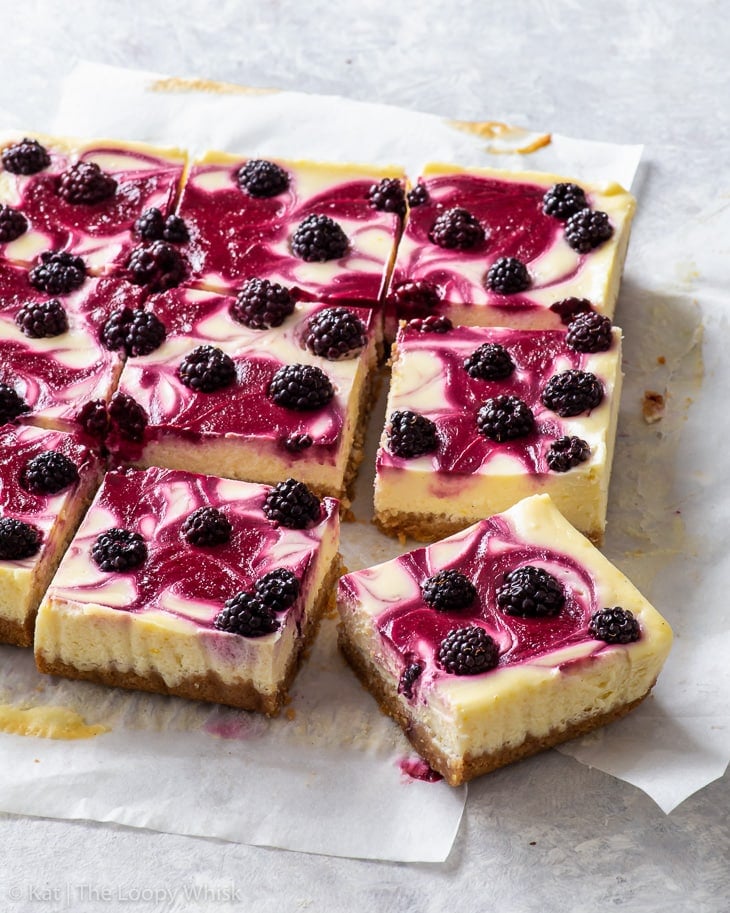 Before we get to the bits and bobs of making these wonderful cheesecake bars – if you like what you’re seeing, subscribe to my newsletter to keep up to date on the latest recipes and tips!

Note: the full recipe, including the ingredient quantities, can be found at the bottom of this page – just scroll down to the bottom, or click the ‘Jump to Recipe’ button at the top of this post.

How do you make the cheesecake crust?

The crust for these cheesecake bars is made from only two ingredients: finely crushed up digestive biscuits (or graham crackers, or other cookies/biscuits of choice) and melted butter.

To make the cheesecake crust, just mix the two together until you get a mixture resembling wet sand (it should hold together when you squeeze it, but shouldn’t feel oily/greasy), transfer it into a lined baking tin and compact it into an even layer using the bottom of a measuring cup or a glass. 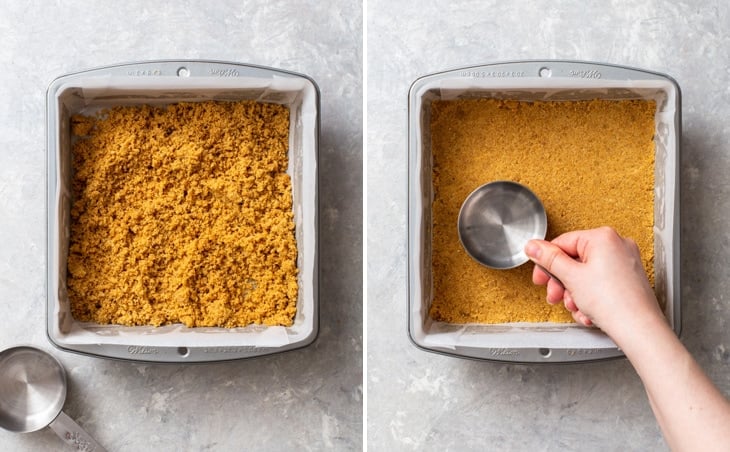 Note that the amount of butter listed in the recipe below is optimised for digestive biscuits – you might need to change it depending on the type (and brand) of cookies/biscuits you use. It’s best to add the melted butter slowly, bit by bit, stirring well after each addition, until you get to the “wet sand texture” I’ve mentioned above.

How do you make the blackberry cheesecake bars?

The base cheesecake filling is made by mixing together room temperature cream cheese, yogurt, caster/superfine sugar, cornstarch, vanilla bean paste, lemon zest, eggs and lemon juice. You can easily mix it by hand, using a balloon whisk – just make sure to mix it, rather than whisking or aerating it. You don’t want to introduce too much air into the mixture, as that can result in the cheesecake bars cracking.

For that reason, I also don’t recommend using a hand mixer to make these cheesecake bars. Instead, if you don’t feel like making them by hand, use a stand mixer fitted with a paddle attachment on the lowest speed setting. Slow and steady is the best was to prepare a cheesecake, if you want to minimise the chances of it cracking.

The base cheesecake filling is then poured on top of the crust, and smoothed into an even layer. The blackberry mixture is spooned on top, and swirled around using a toothpick or skewer. Be careful not to over-swirl it; you want the two colours of the cheesecake fillings to stay separate and distinct, gently swirling around each other.

Finally, we’ll dot a few fresh blackberries around the cheesecake filling. And then, it’s off to the oven! 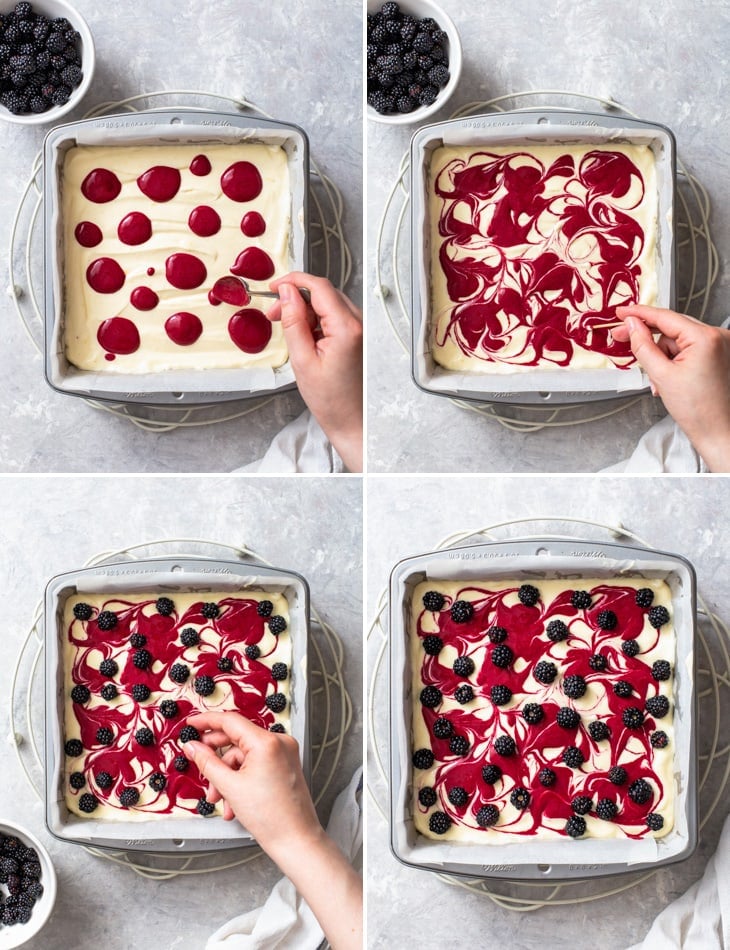 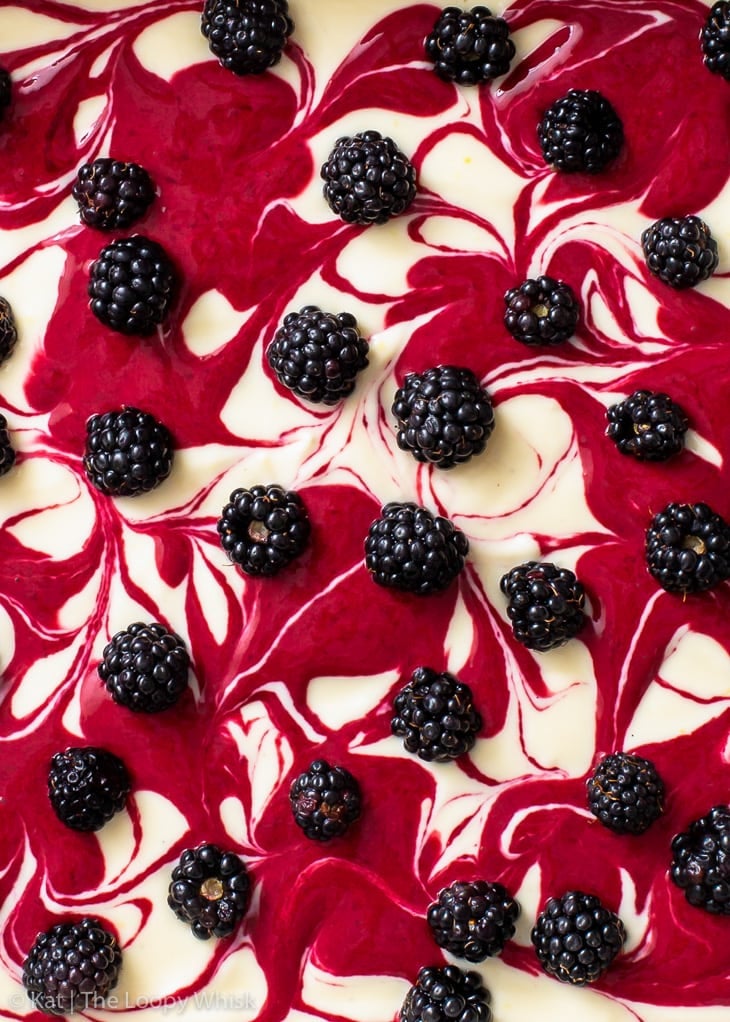 How do you prevent your cheesecake from cracking without a water bath?

Here are the 5 things you need to keep in mind to prevent your cheesecake (bars) from cracking:

How long do you bake the blackberry cheesecake bars?

Note that this temperature is for a conventional oven, not for a fan oven. I usually don’t recommend using a fan/convectional oven for baking cheesecake (bars), but if you don’t have other options, reduce the temperature by 20ºC.

Once baked, I cool the cheesecake bars in a turned-off oven with the oven door ajar, until they’re at room temperature. This usually takes about 1 hour to 1 hour 30 minutes. 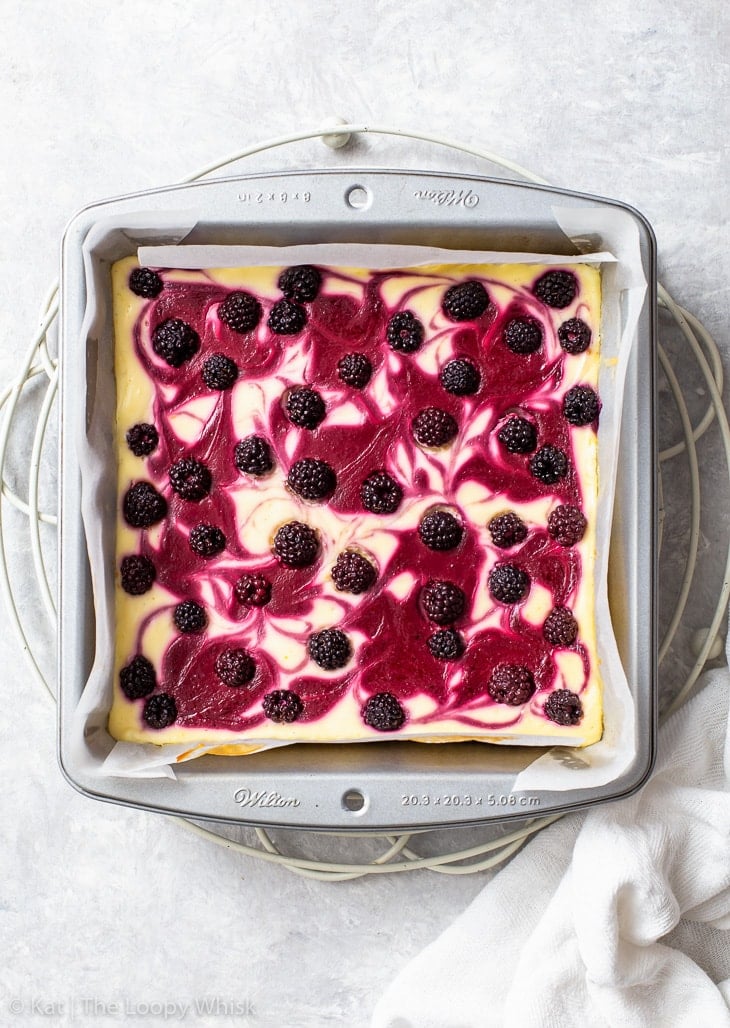 Do you have to chill the cheesecake bars before serving?

Okay, I admit it: I’ve been known to tuck into cheesecake bars (and even the occasional cheesecake) when they’re still warm. And I have zero regrets. Eating warm cheesecake bars is a completely different experience – you get to enjoy a different set of textures and flavours. In fact, I almost prefer a warm vanilla cheesecake to its chilled equivalent (I know that this might be a slightly controversial opinion).

That said, I do recommend chilling these blackberry cheesecake bars. Chilling them (preferably overnight in the fridge) really brings out the blackberry flavour, makes the lemon zest more prominent and allows you to cut neat slices. 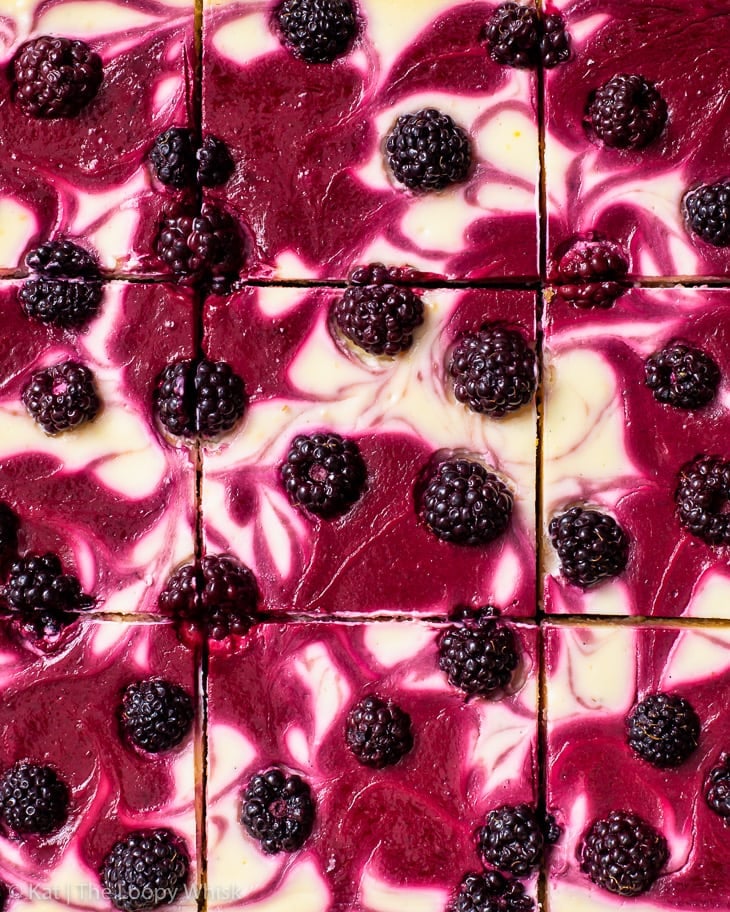 Can you use other fruit to make these cheesecake bars?

While blackberries are hands down my favourite pick for these cheesecake bars, you can also use raspberries (in fact: check out my recipe for small-batch raspberry cheesecake bars) or blueberries.

And there you have it, friends. Everything and anything you need to know to prepare THE PERFECT blackberry cheesecake bars. I hope you love them as much as I do.

I’ve actually been on something of a cheesecake bars kick lately, and I have an exiting new recipe in the works already – so be on the lookout for a coffee cheesecake bars recipe, with the most luscious coffee caramel swirl. (Yes, they’re every bit as delicious as they sound.)

Have a wonderful day, friends, and happy baking! 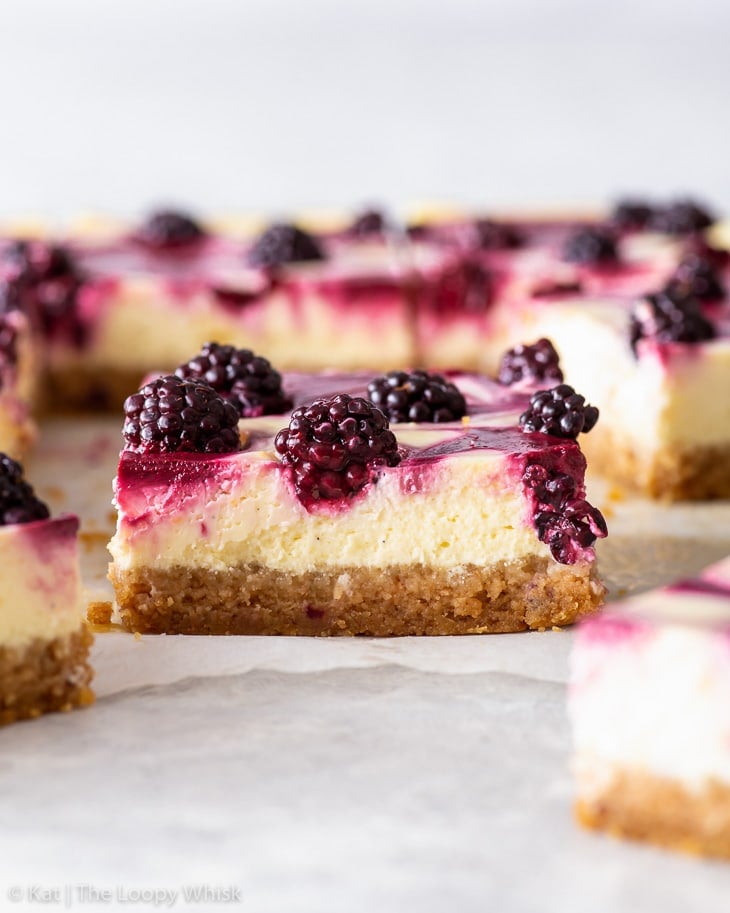 These blackberry cheesecake bars are super creamy and simply bursting with flavour, thanks to an abundance of lemon zest and vanilla bean paste in the base cheesecake filling, as well as the aromatic blackberry swirl flavoured with a blackberry reduction. Plus, I’m giving you all the tips and tricks to prevent your cheesecake (bars) from cracking, without using a water bath!
Print Rate
5 from 1 vote
Prep Time 30 mins
Cook/Bake Time 40 mins
Total Time 1 hr 10 mins
Servings 9 bars
Author Kat | The Loopy Whisk

For base cheesecake filling:

For base cheesecake filling: 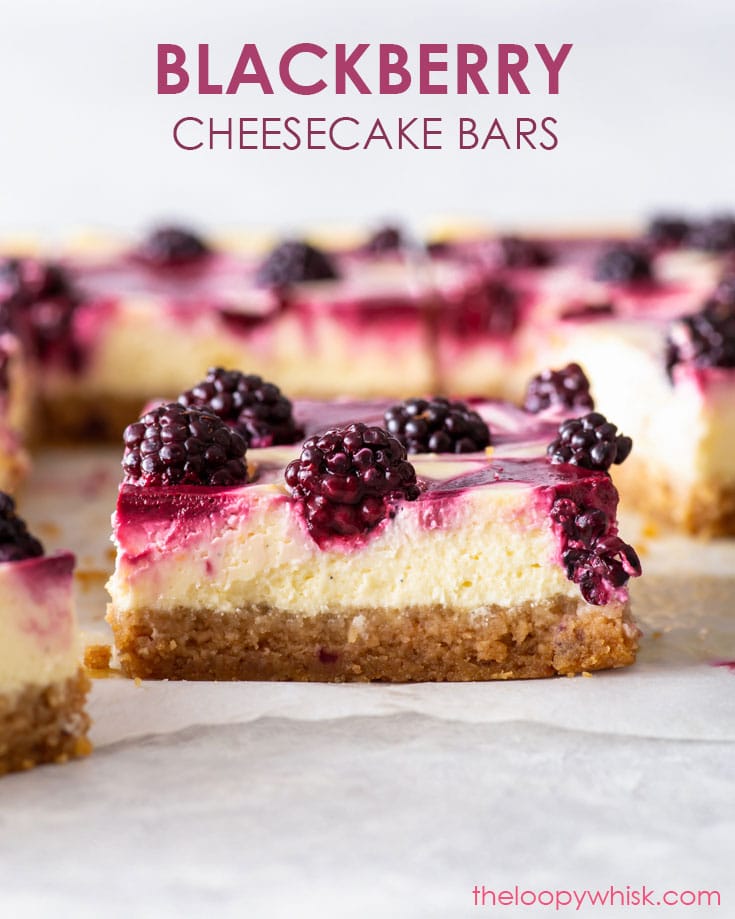 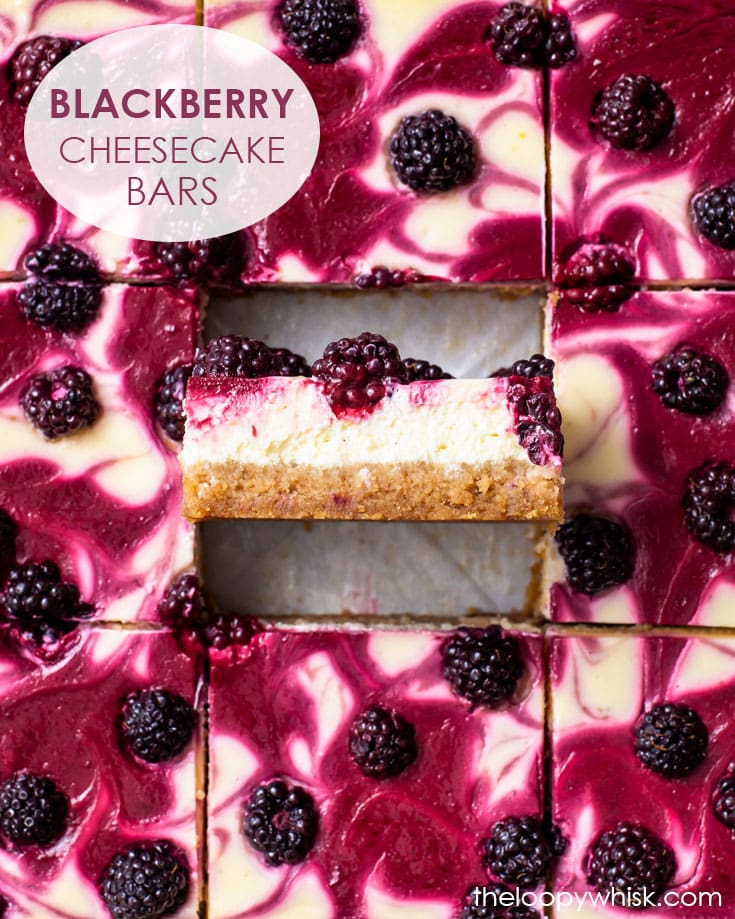 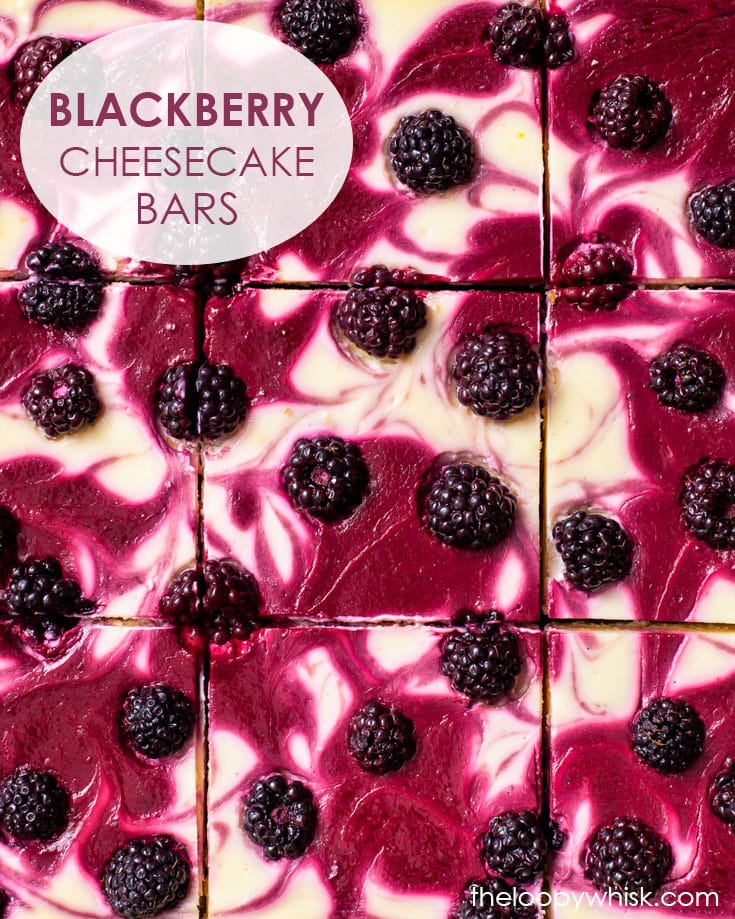