Skip to content
Order my GLUTEN-FREE cookbook!
About meCookbookContactWork with me
Home » The Ultimate Fudgy Vegan Chocolate Brownies

These are the best vegan brownies you’ll ever taste. Not only are they perfectly fudgy and intensely chocolatey, they also boast that elusive, beautiful shiny paper-thin crust. On top of that, they’re dead easy to make, require only 7 ingredients – and no egg replacements or aquafaba! 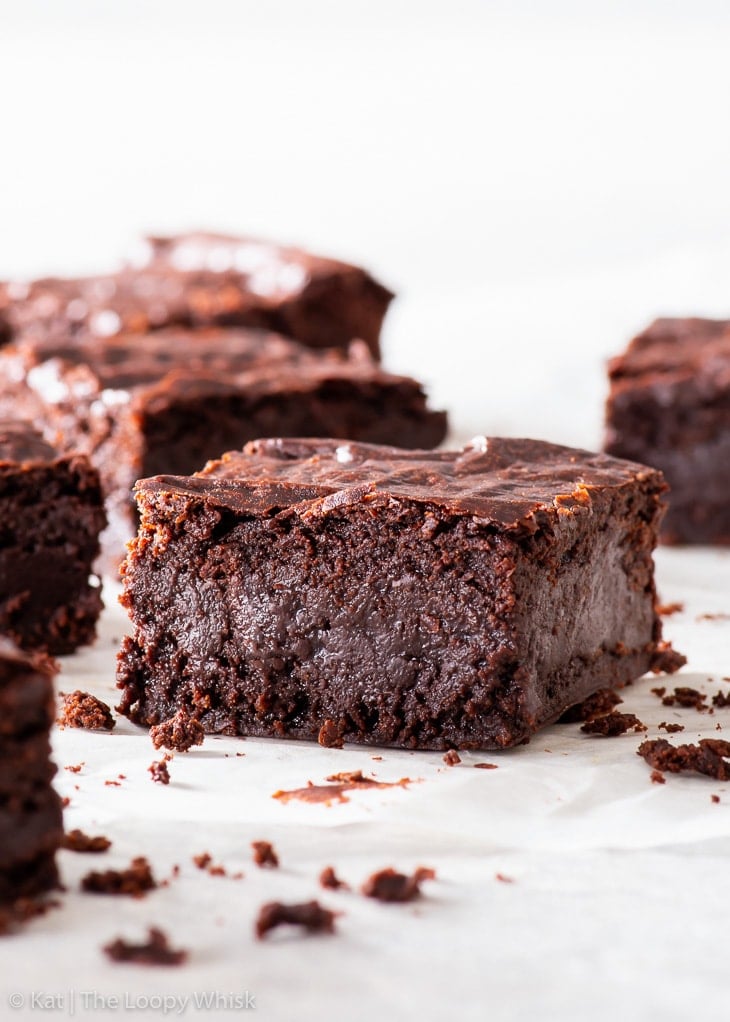 I know I tend to use superlatives pretty much every time I talk about brownies (or just chocolate in general) – but these are THE BEST VEGAN BROWNIES I’ve ever tasted. Yes, even better than my Best Vegan Brownies (and that’s saying something).

They’re perfectly fudgy, intensely chocolatey with an added depth of flavour from the Dutch processed cocoa powder AND they have that coveted shiny, paper-thin crust.

The best part? The recipe is almost ridiculously simple, has only 7 ingredients and requires no egg replacements or aquafaba. Instead, all the ingredients are pantry staples you are guaranteed to have in your kitchen already:

This probably sounds too good to be true – but it’s 100% real, 1000% fabulous and just waiting for you to get baking (and eating, of course). 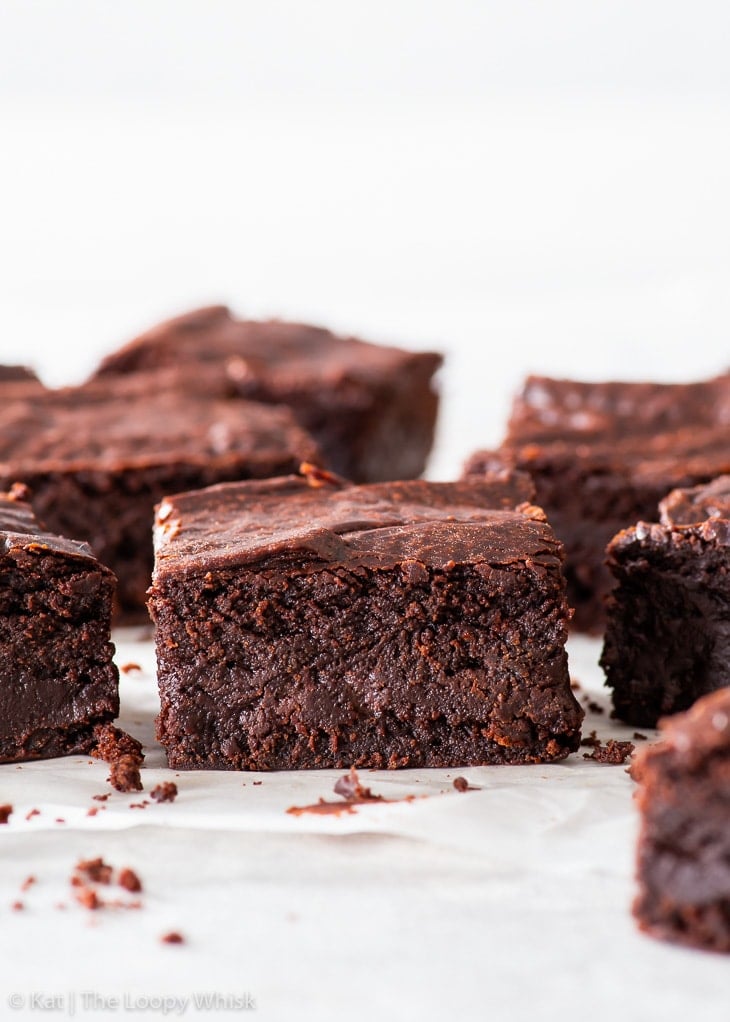 Before we get to the bits and bobs of making these wonderful brownies – if you like what you’re seeing, subscribe to my newsletter to keep up to date on the latest recipes and tips!

How do you make vegan brownies from scratch?

As always, you can find the full recipe (including the ingredient quantities) at the bottom of this post. But to make your life easier – and your brownies even more delicious – here are the step-by-step photos, so you’ll know what your brownie batter should look like at each and every stage.

First up: you’ll need to melt together the chocolate and oil – you can do this in the microwave or over a pot of simmering water. 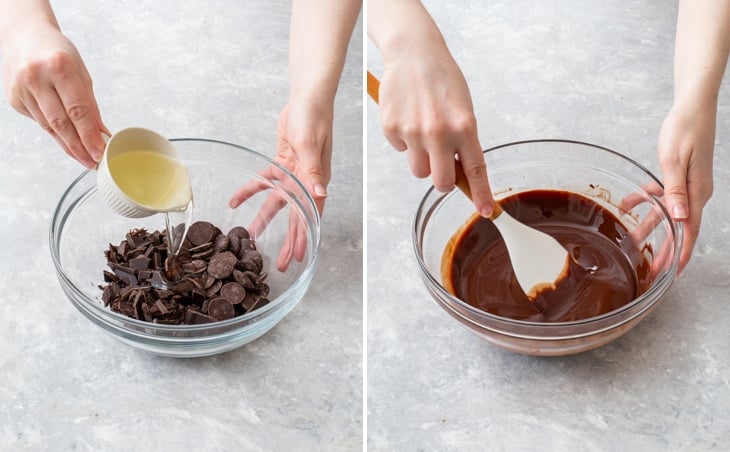 Then, you’ll need to prepare a simple sugar syrup by mixing together sugar and water, and heating the mixture until the sugar is fully dissolved (but not so much that the mixture starts boiling, evaporating or caramelising). I go into more detail about the purpose and role of the sugar syrup below. 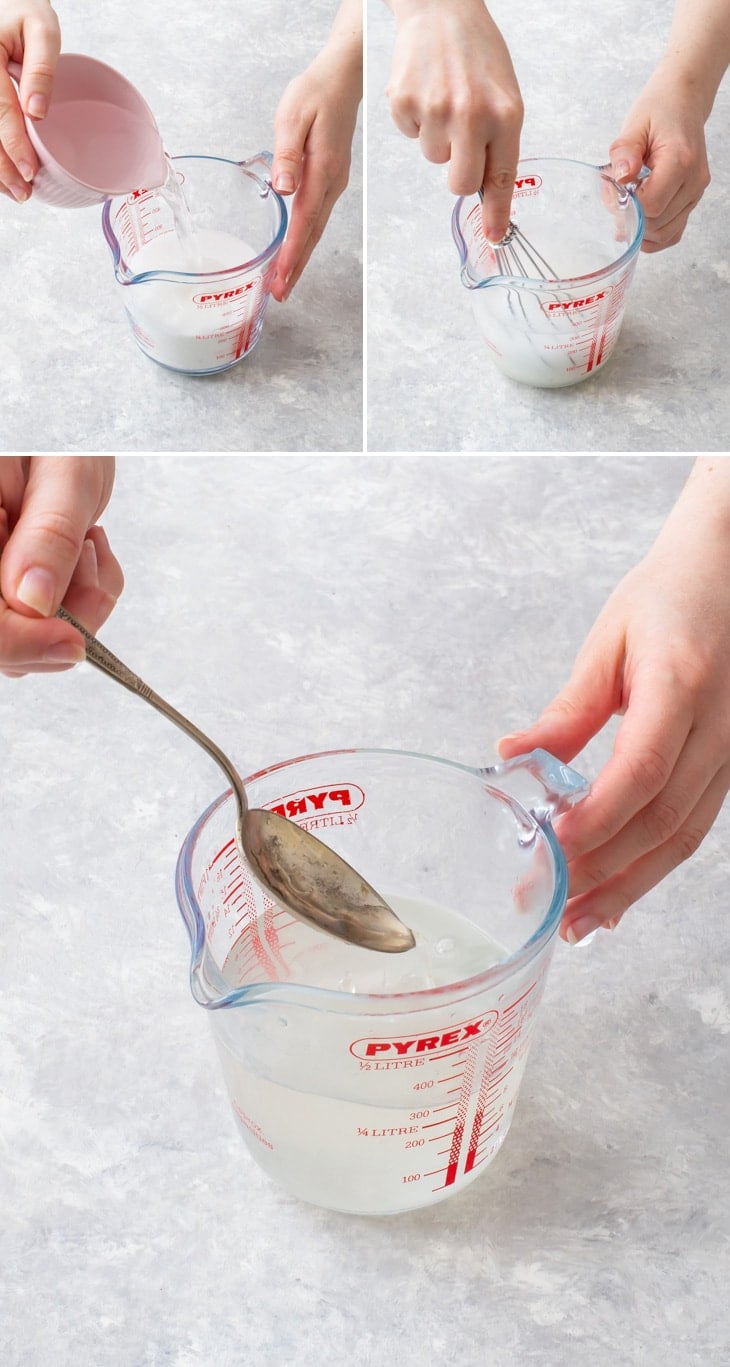 Next, it’s time to combine all the ingredients: 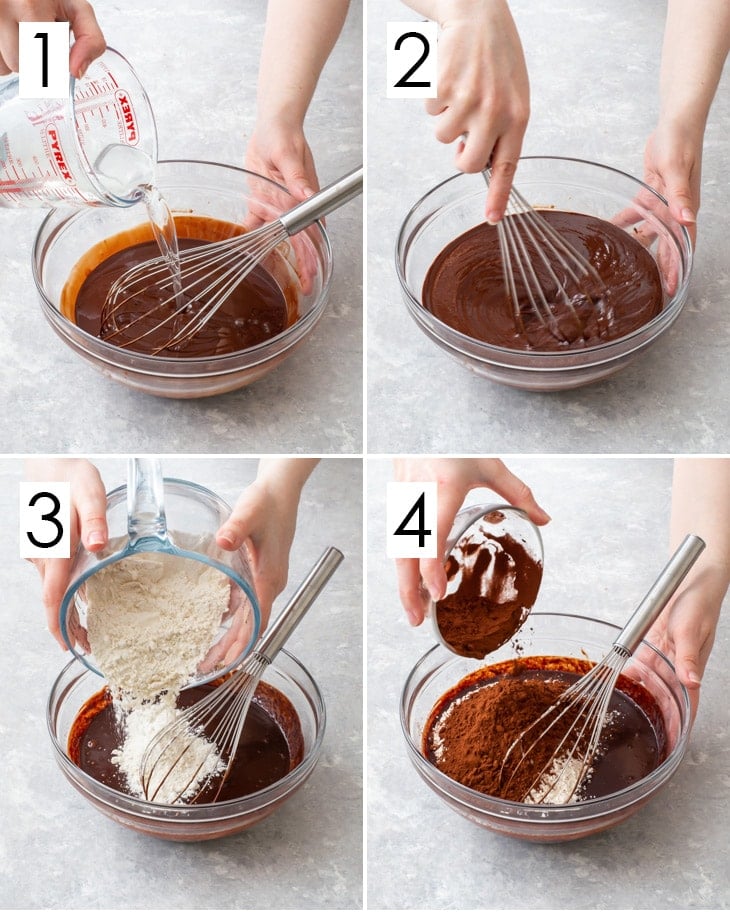 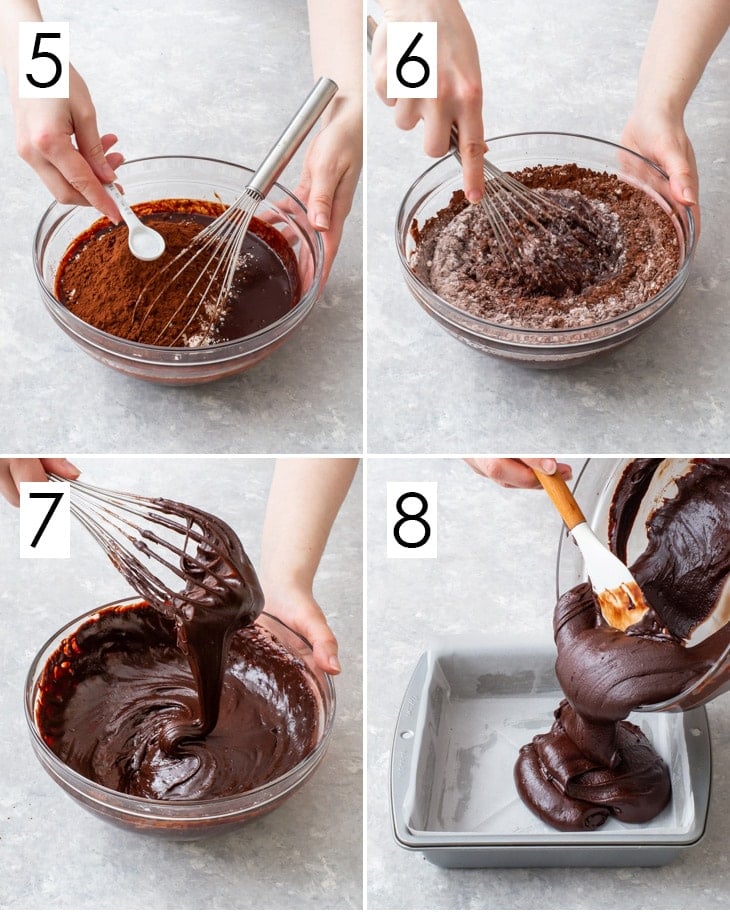 What is the purpose of the sugar syrup? (Or: a brief look into how recipe development works ‘round these parts.)

TL;DR: The sugar syrup replaces the egg + sugar mixture normally prepared in a regular brownie recipe, giving the brownies their drop-dead-gorgeous shiny top and contributing to their fudgy texture.

Okay, now onto the long version:

When I started developing this recipe, I based it on my Shiny Top Brownies recipe from my upcoming gluten free baking book. That recipe went through 20+ rounds of tweaking and perfecting, so it was a pretty good starting point. (Those brownies are actually freakin’ amazing, but that’s a story for another time.)

In addition to tweaking the ingredients from gluten free to regular flour, the main issue was how to mimic the effect of eggs, since the original recipe was non-vegan. Initially, I used aquafaba (the water from a can of chickpeas), a commonly used egg replacement in brownies.

However, whipped aquafaba can sometimes make the brownies a bit dry and cakey in texture, and I wanted these to be the fudgiest vegan brownies you’ll ever set your eyes on. Furthermore, I wanted to get that elusive shiny top, which is normally achieved by getting the sugar to dissolve in eggs, which then forms what is essentially a thin layer of meringue on top of the brownies.

So, whipping the aquafaba was out of the question. Instead, I tried dissolving the sugar in the aquafaba simply by heating the two together over medium-high heat, and then mixing the resulting sugar syrup into the brownie batter. Lo and behold: the shiny top made an appearance!

Then, I took it a step further – what if you take away the protein content of the aquafaba (that is: the reason why it’s commonly used as an egg or egg white substitute in vegan cooking and baking) and… just use water?

Admittedly, I wasn’t sure whether it would work. (Okay, I was downright sceptical.) But… it worked. The brownies were perfectly fudgy, with a beautiful shiny top – all from using water essentially as the “egg substitute”.

Insanely brilliant? YES. (If I do say so myself.)

Now, for this to work, it’s VERY IMPORTANT to keep the amount of water low, just enough to dissolve all the sugar when heated. If you add more water, the shiny top will disappear and the texture will go from deliciously fudgy to something that resembles a dense, under-baked cake (trust me, it’s not pleasant or appetising at all). That’s to say… follow the recipe. 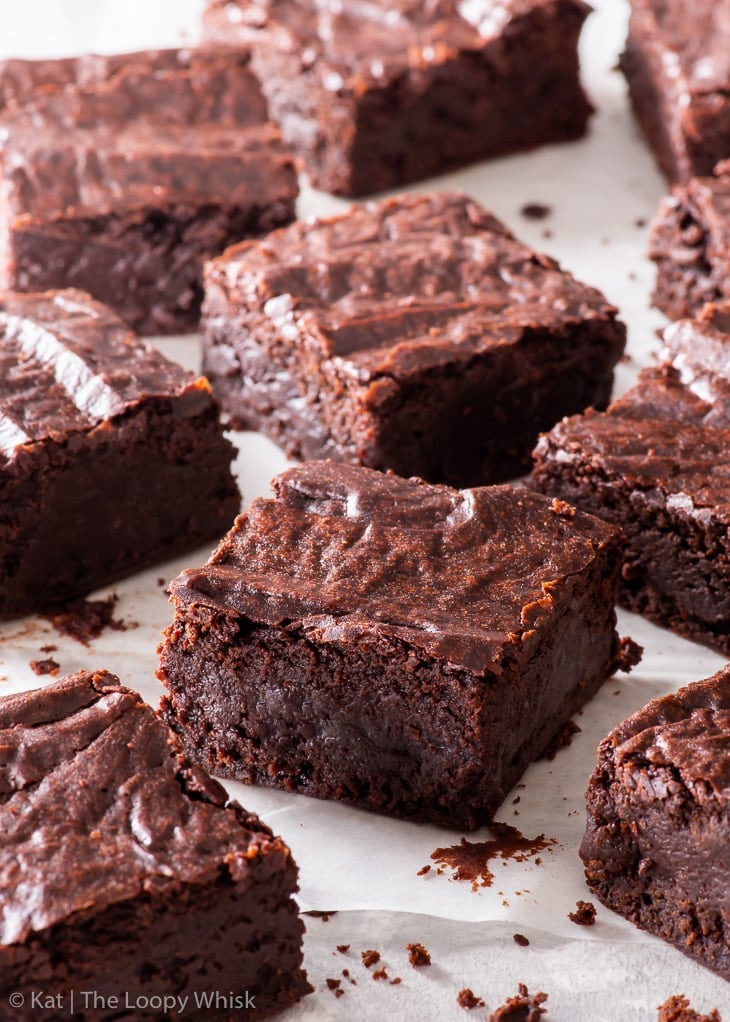 What makes these vegan brownies fudgy?

The fudgy texture is the result of a couple of factors:

Although the recipe below gives an approximate baking time (about 30 minutes at 320 ºF/160 ºC), each oven behaves a bit differently, especially if it’s not quite correctly calibrated. That’s why I recommend doing a toothpick test.

In the “toothpick test”, you insert a toothpick or skewer into the middle of the brownies for about 2 seconds. Unlike in a cake recipe, you’re not looking for a completely clean toothpick – that would mean that you’ve over-baked the brownies. 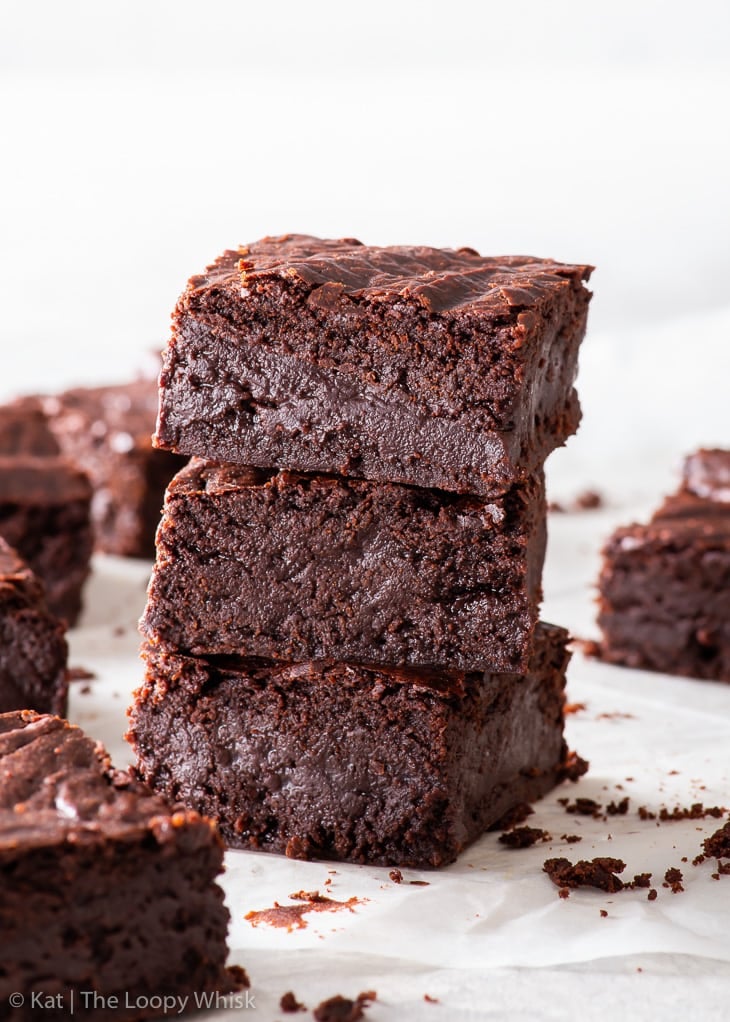 How long do vegan brownies keep?

Realistically, these probably won’t last more than a day – they’re just that good.

But if you’re very good at hiding food (from yourself and others): these vegan brownies keep well in a closed container at room temperature for 3 – 4 days. They will become chewier with time.

There you have it, friends. A simple, reliable recipe for the most amazing vegan brownies (ever). Truth be told, these just might be the best vegan dessert I’ve ever had.

But don’t just take my word for it. Test them out for yourself. And thank me later. 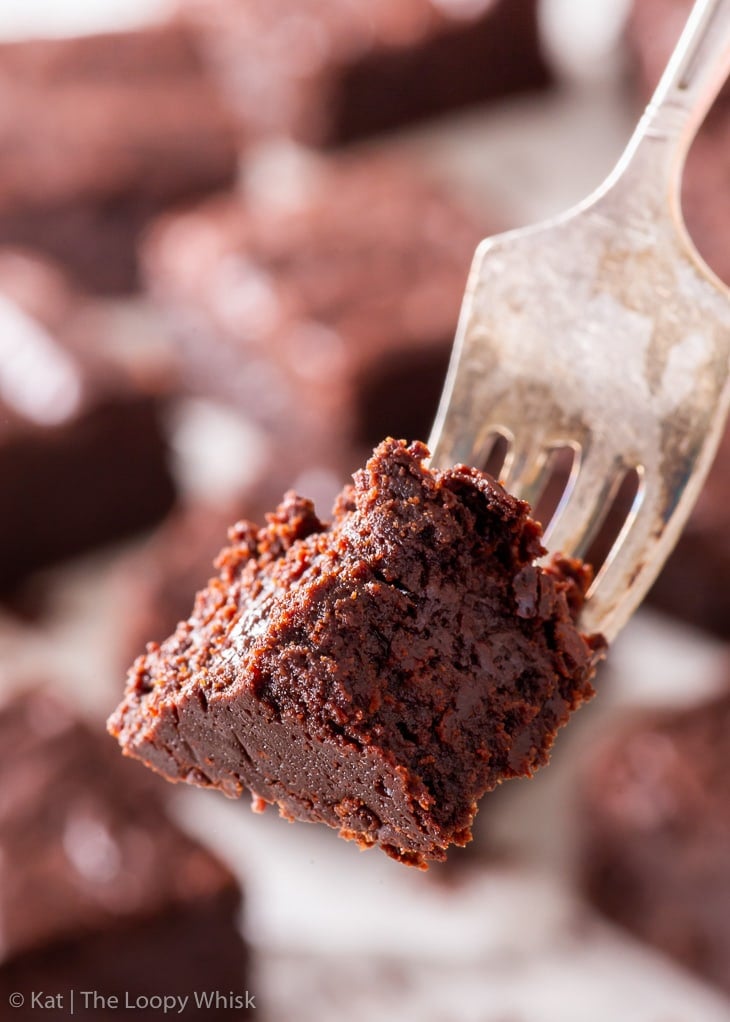 These are the best vegan brownies you’ll ever taste. Not only are they perfectly fudgy and intensely chocolatey, they also boast that elusive, beautiful shiny paper-thin crust. On top of that, they’re dead easy to make, require only 7 ingredients – and no egg replacements or aquafaba!
Print Rate
4.89 from 17 votes
Prep Time 15 mins
Cook/Bake Time 30 mins
Total Time 45 mins
Servings 16
Author Kat | The Loopy Whisk 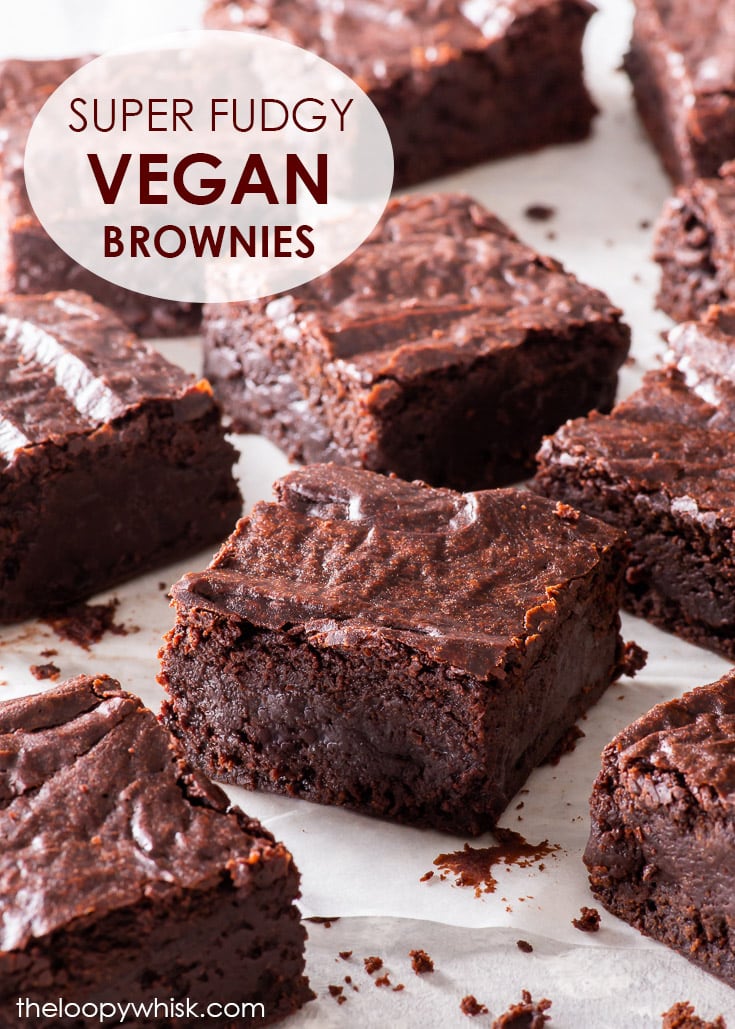 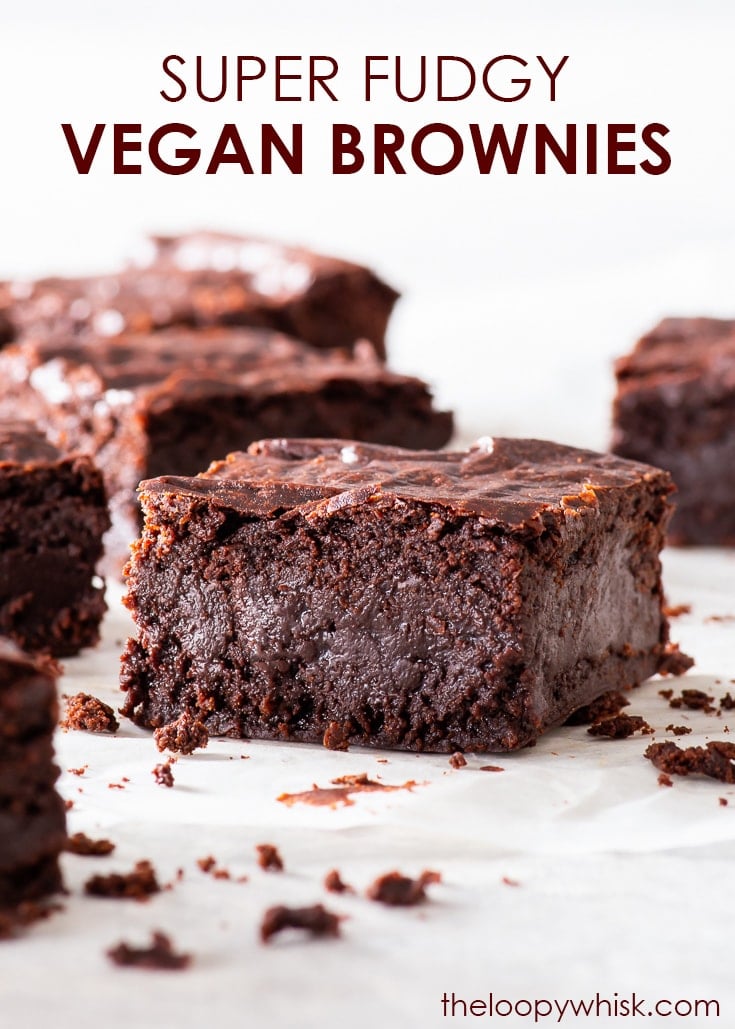