These vegan sticky buns are vegan comfort food at its best. They’re pillowy soft, drenched in the most amazing cinnamon and maple syrup caramel, and the addition of pecans adds a wonderful crunchy texture. Plus, they’re surprisingly easy to make!

This post has been created in collaboration with Tala. All opinions expressed in the post are my own… plus, there’s a whole lotta sticky deliciousness – so read on. (For more information you can check out my Disclosure Policy.) 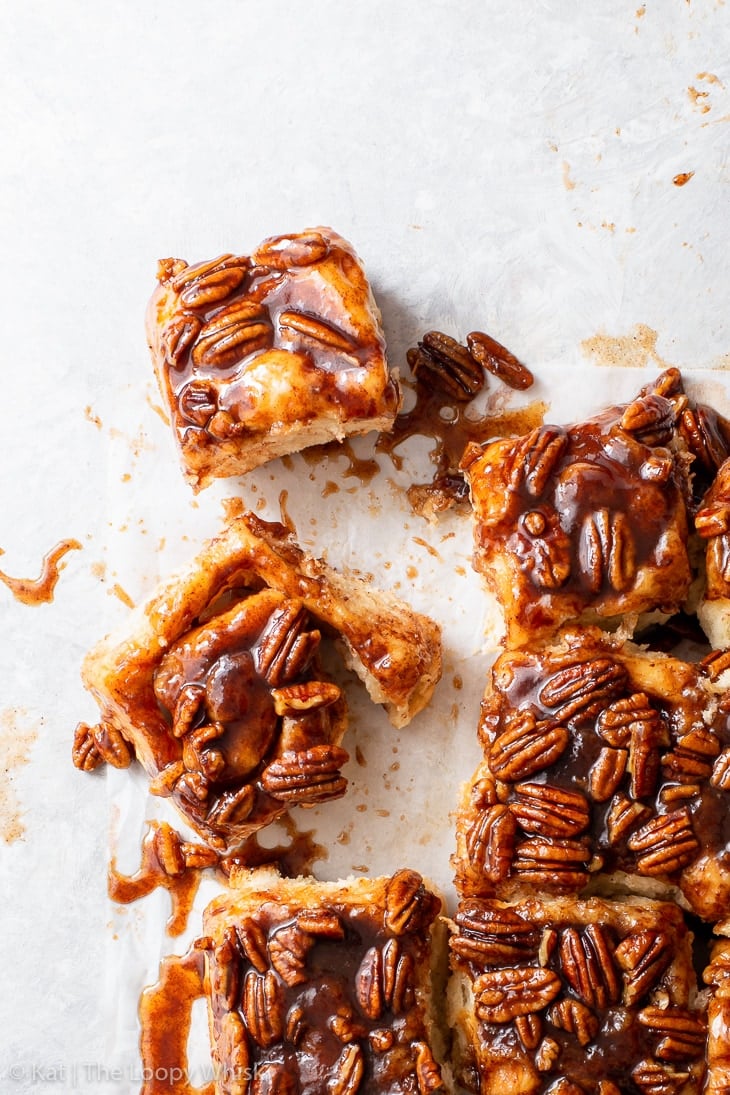 These vegan sticky buns should come with a warning… so proceed at your own risk.

What’s so dangerous about them, you ask? Let me tell you all about it.

They’re pillowy soft, like a cloud of sweet sugary goodness. The filling is sticky and cinnamon-y and fragrant with maple syrup. The pecans add a wonderful crunch – plus, as we all know, pecans and maple syrup are a match made in heaven.

Eating the sticky buns is impossible without making a mess of your hands and half your face… which I think makes the whole experience infinitely better. Is it even comfort food if it’s not a bit messy, in that uniquely indulgent, decadent way? (I think not.)

The making of these buns was made about 100-times easier (and more fun) by some wonderful products from Tala. You might remember Tala bakeware from this epic triple chocolate cake, and with this sticky buns recipe, they show their quality once again.

But we’ll get to the making of these vegan cinnamon & pecan sticky buns in just a moment. First, let’s have a look at what makes these sticky buns so kick-ass awesome. 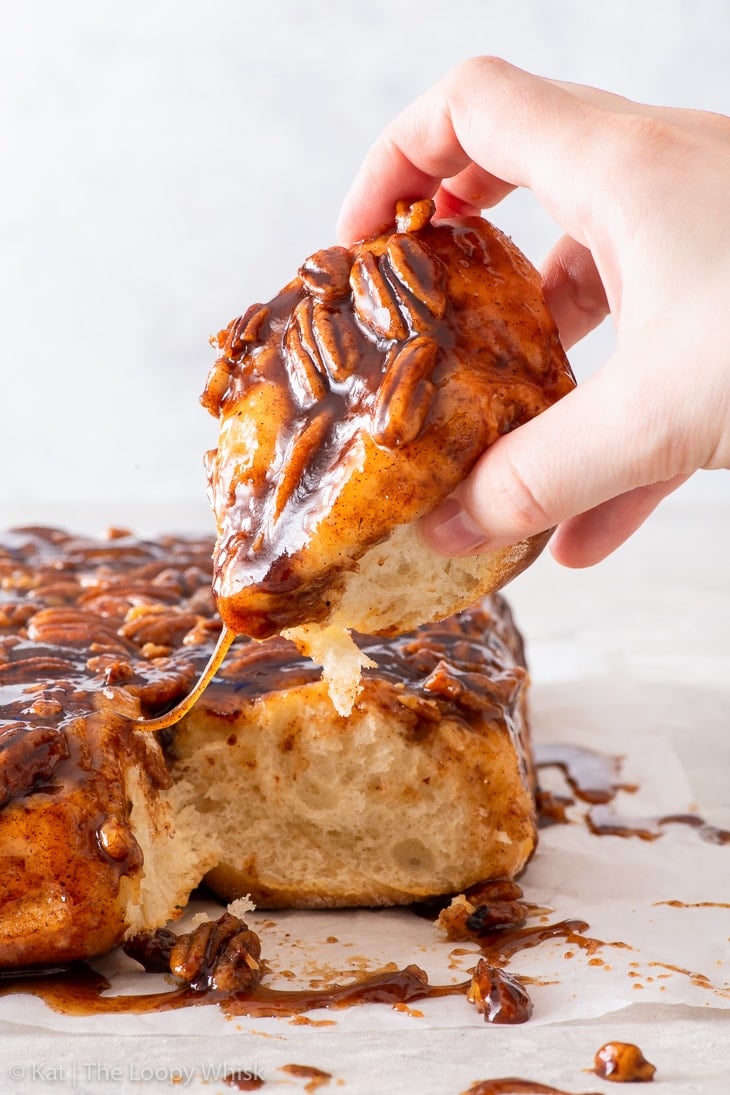 1. The textures. From the cloud-like softness of the dough and the sugary stickiness of the filling, all the way to the crunch of the pecans, these buns are an explosion of texture… in the best possible way.

2. The maple-caramel-pecan filling. The buns are filled with the same mixture that also forms the caramel that oozes down the buns once they’ve turned out of the baking tin. And, you guys, it’s a winner. It’s incredibly aromatic thanks to the cinnamon and maple syrup, while the coconut cream adds a wonderful richness. This is definitely the highlight of this dessert!

3. They’re vegan! That’s right, folks, these amazing buns are 100% vegan, no eggs, butter or other dairy products in sight. And, honestly, it’s pretty impossible to guess they’re vegan. All you can see, taste and smell is just an overwhelming amount of deliciousness.

4. They’re dead easy to make. Okay, so you have to make a yeasted dough – no big deal! This recipe is honestly really simple, and I’ll take you through it step by step.

5. They’re dangerously delicious… have I mentioned this part yet? 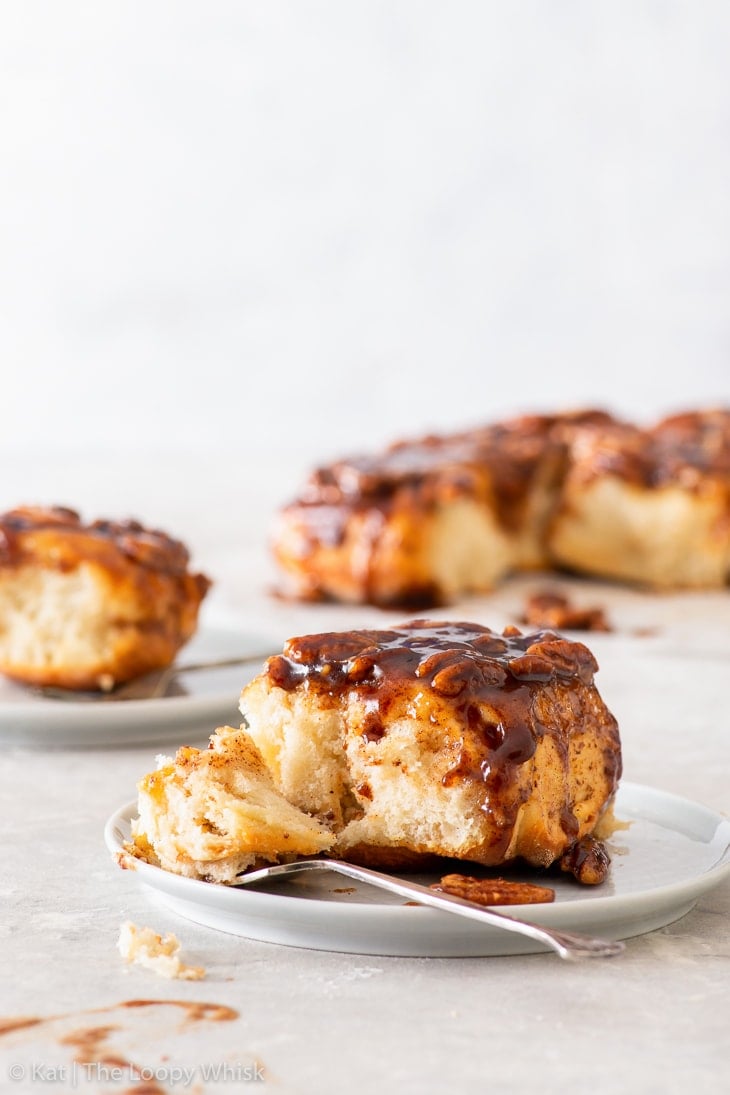 Before we get to the bits and bobs of making these wonderful sticky buns – if you like what you’re seeing, subscribe to my newsletter to keep up to date on the latest recipes and tips!

How do you make vegan brioche dough?

Like most cinnamon rolls and similar, the basis of the recipe is a brioche dough. But because the recipe is vegan, there are no eggs involved, and the milk and butter are substituted by a non-dairy milk (like almond, soy, rice or oat milk), coconut cream and coconut oil.

The whole recipe, including the ingredient quantities, can be found at the bottom of the page, but here’s an overview of how to make vegan brioche dough:

How do you make the sticky bun filling?

The filling for these vegan sticky buns is just a mixture of melted coconut cream, light brown sugar, maple syrup and cinnamon. And you just need to mix it all together until combined and pop into the fridge so it firms up slightly, which makes it easier to spread in a controlled manner.

How do you make the vegan sticky buns?

Okay, so we’ve made the vegan brioche dough that’s done its proofing thing, and the filling is ready to go.

First, the bottom layer of caramel needs to be assembled. For this: 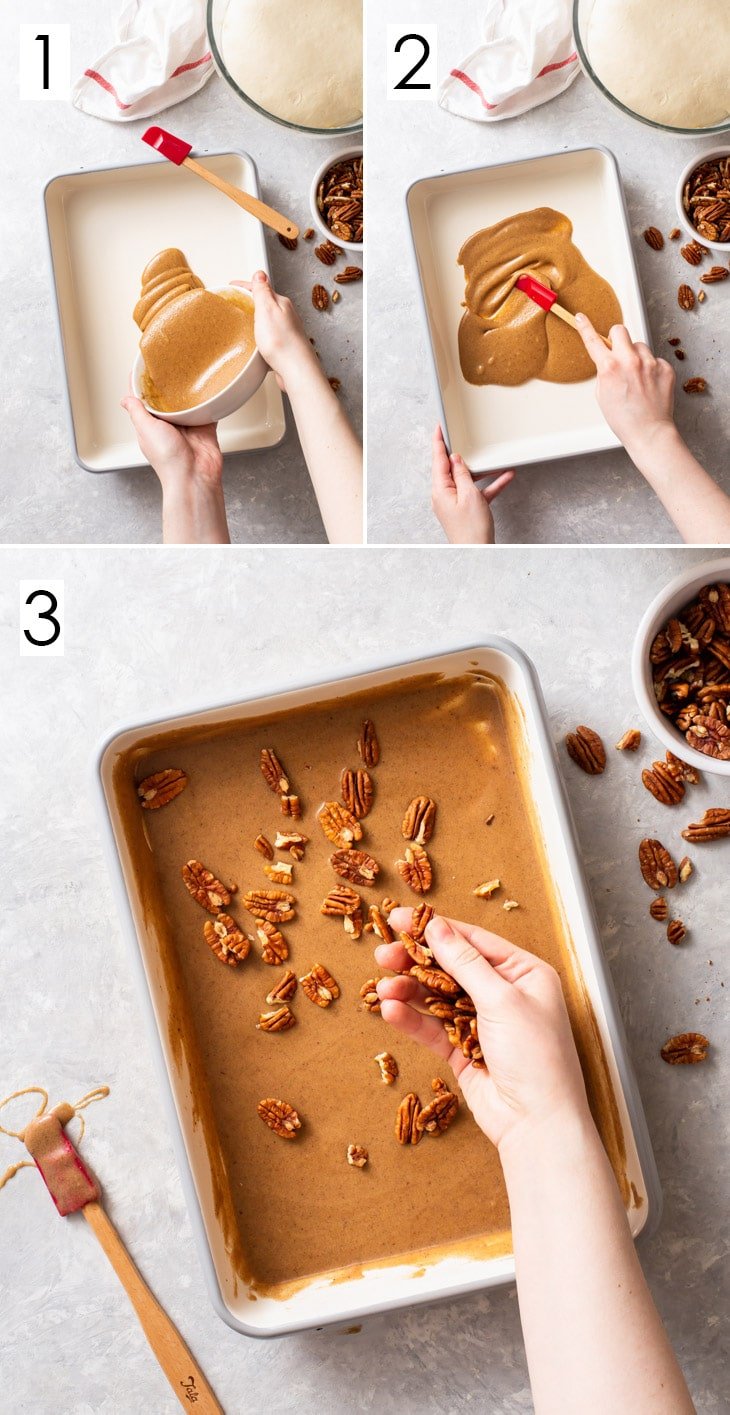 Then, set the prepared baking tray aside and let’s focus on the buns themselves.

All that’s left to to is to transfer the buns into the baking tray, placing them on top of the layer of caramel-in-making. Come on, you know this is going to be epic. 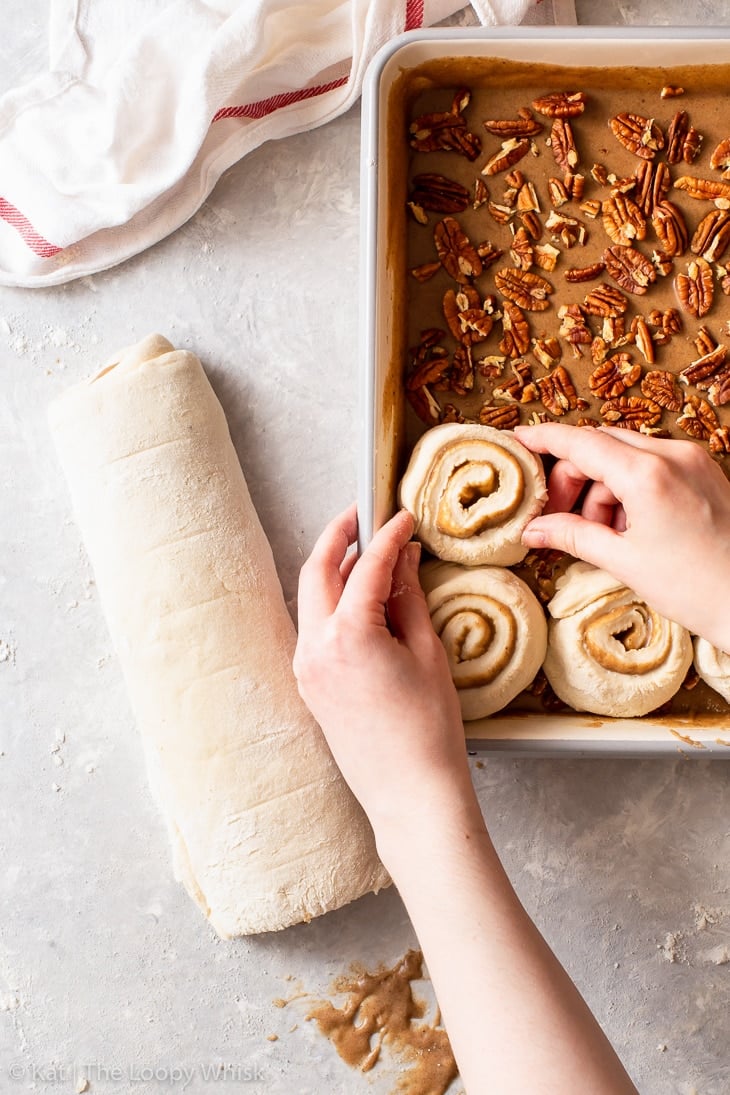 Then, the rolls are off for a second round of proofing, after which they’ll be all lovely and puffed up. 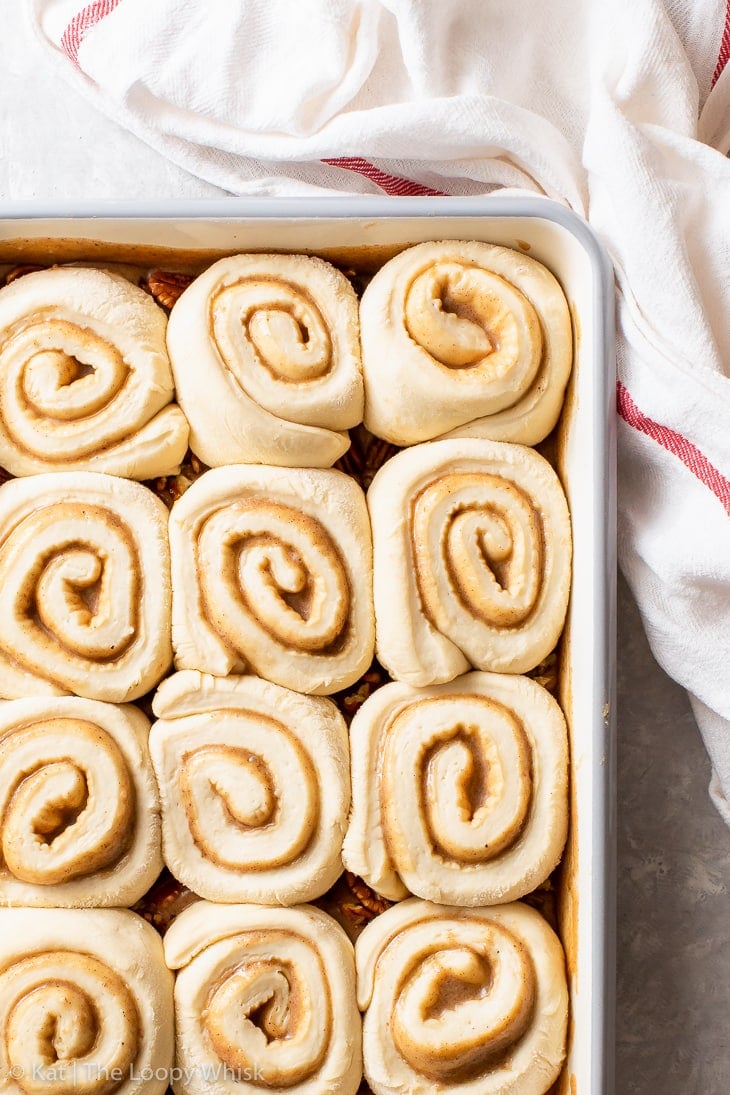 And it’s off to the oven with them. This is probably the most difficult part of the whole process –patiently waiting form the buns to bake, while your kitchen fills with the most mouthwatering smells. It’s cruel, I know. Hang in there, the results will be 100% worth it. 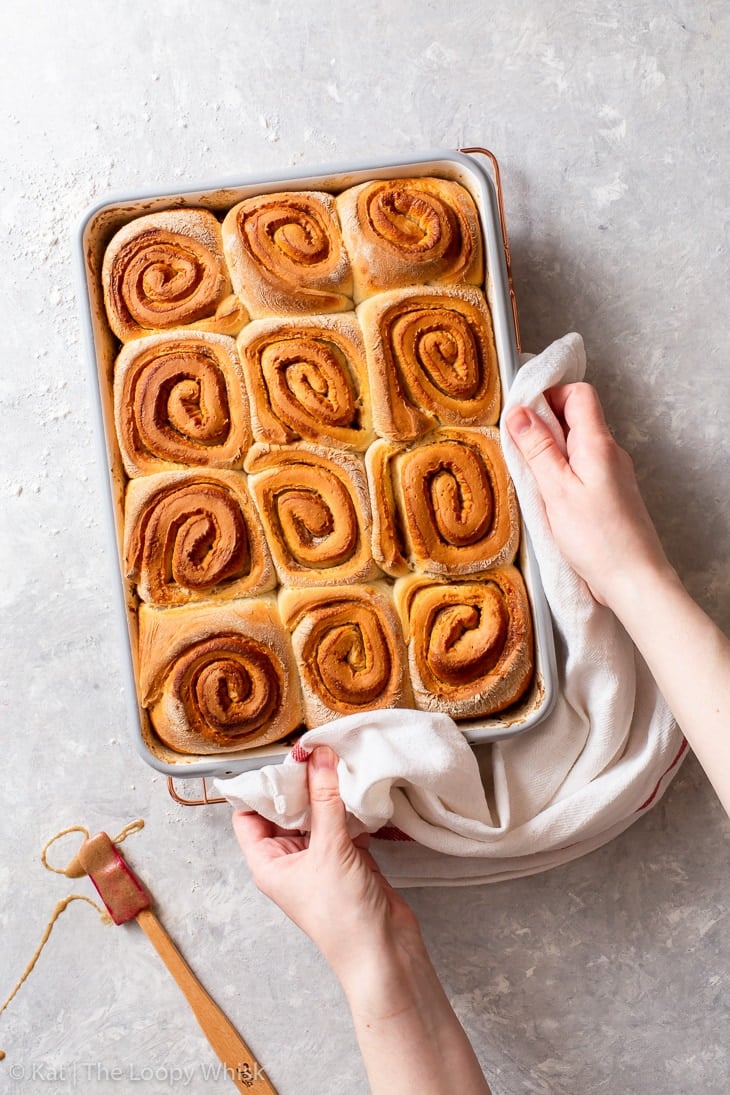 Once baked, it’s best to turn the vegan sticky buns out of the baking tray and onto a large serving plate as soon as possible, before the caramel has time to cool and firm up (which would make the buns stick like crazy, so don’t wait around).

And then… vegan sticky bun heaven.

So that’s my offering for today. Vegan comfort food at its best, drenched in cinnamon-y caramel. It really doesn’t get much better than this, does it? 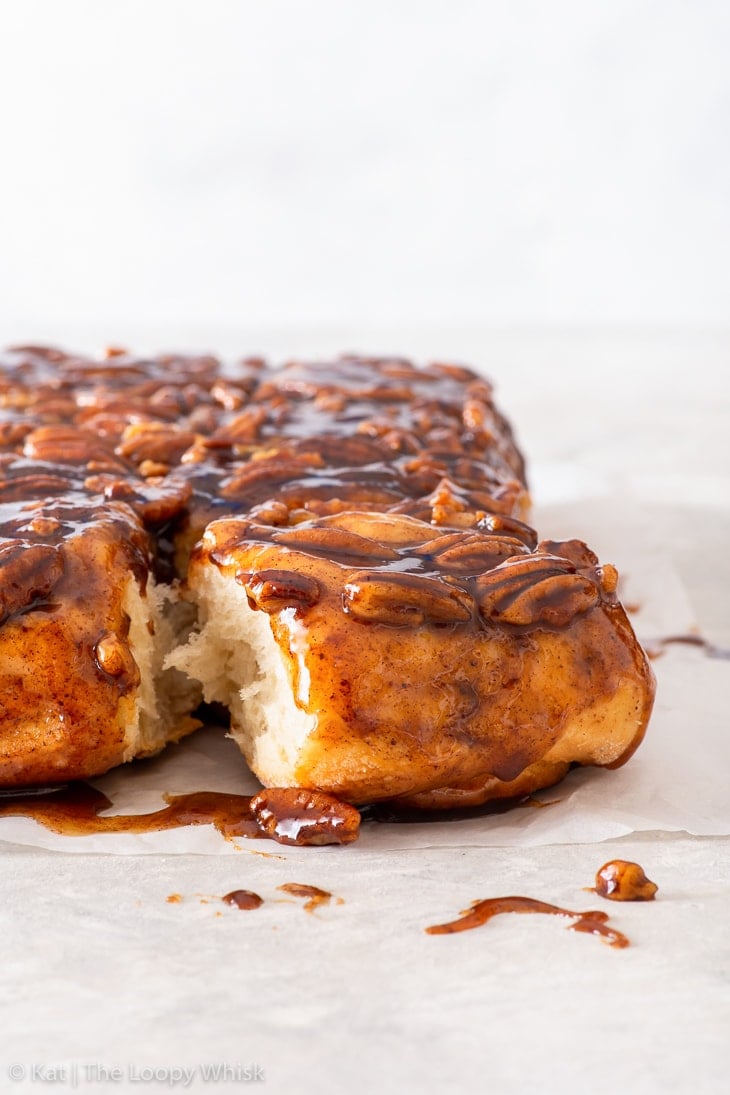 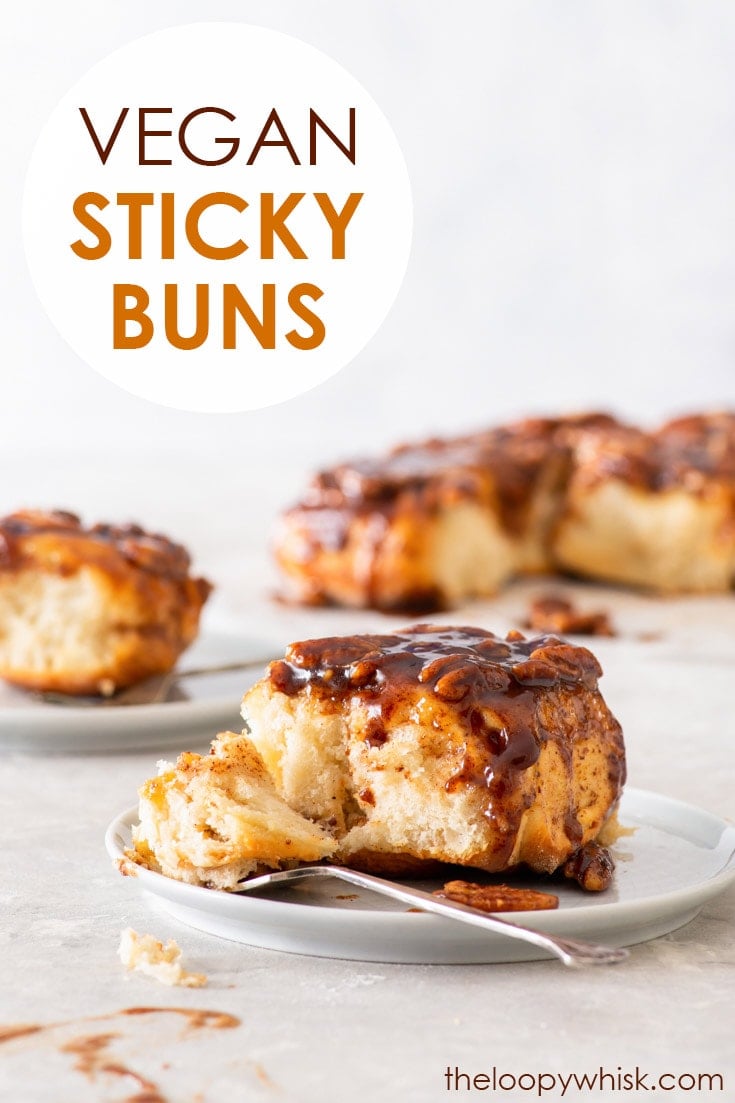 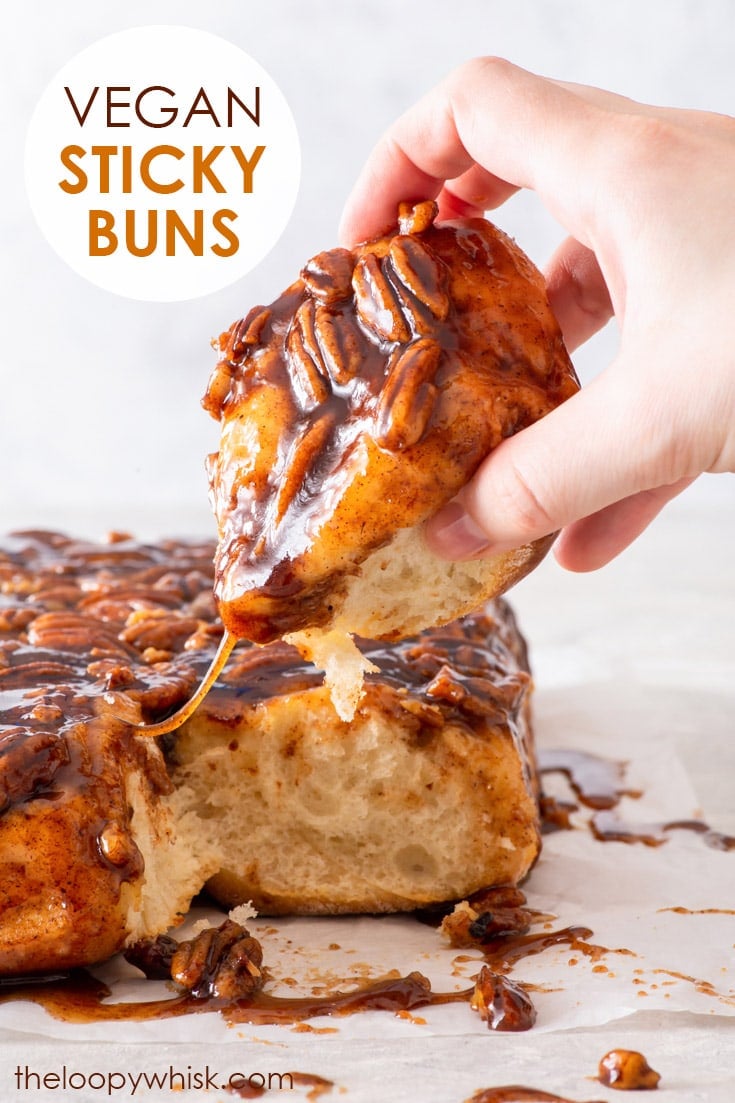 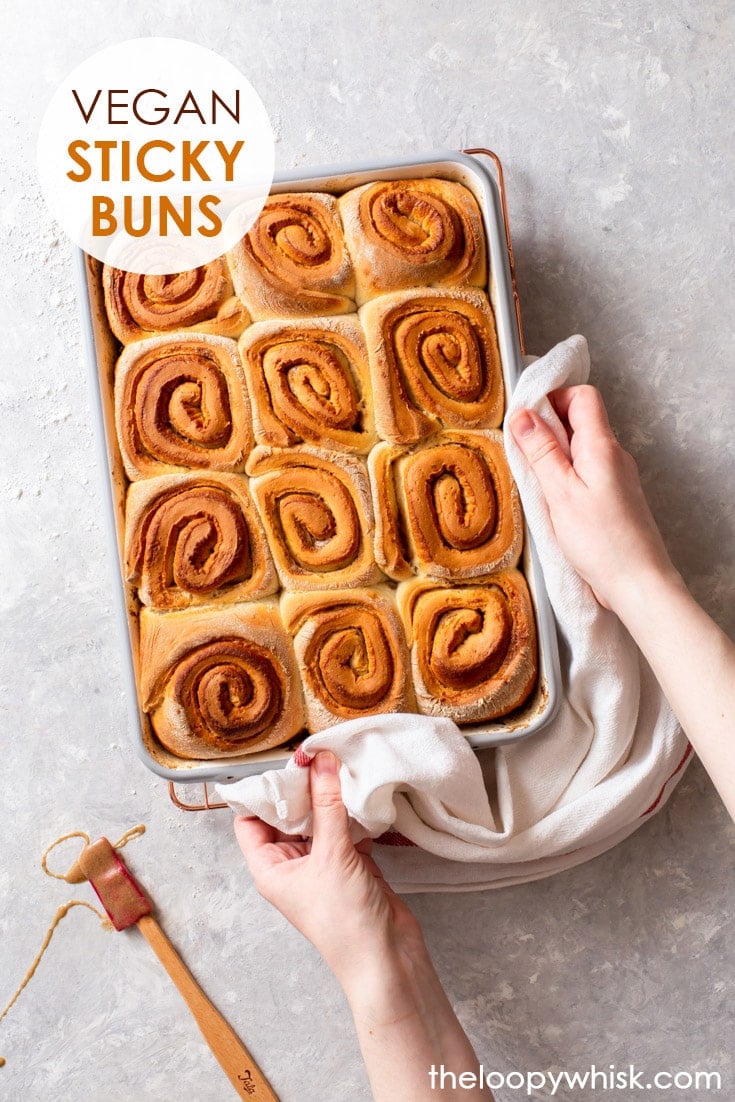 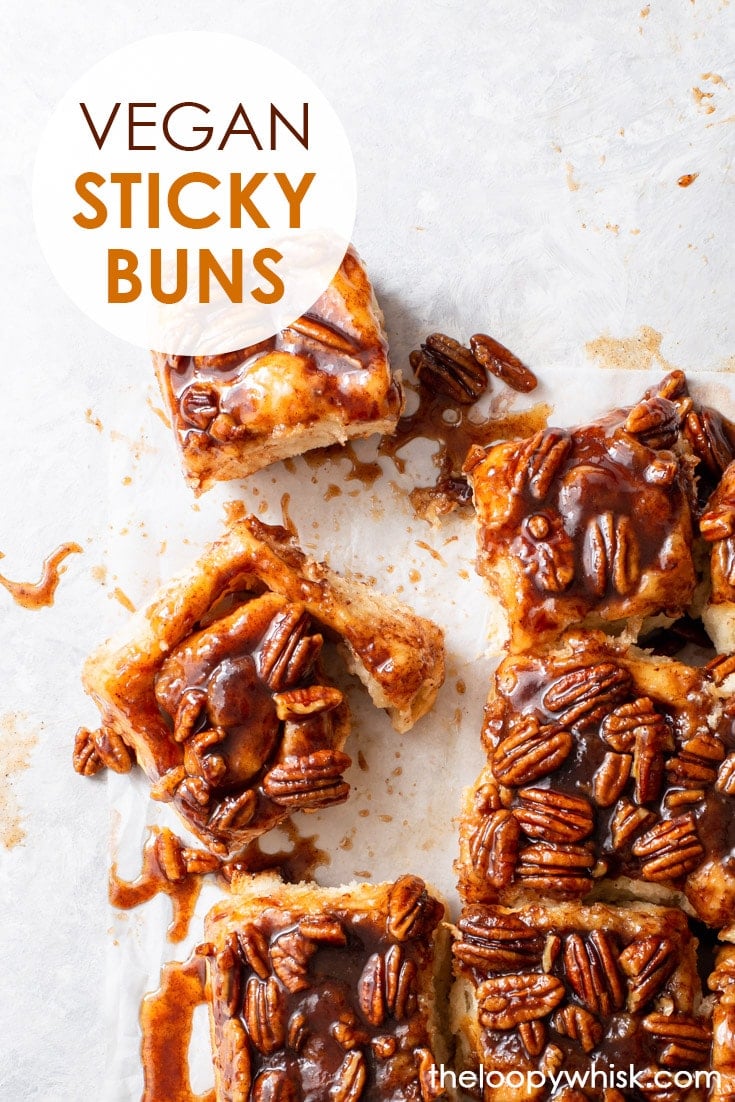