Skip to content
Order my GLUTEN-FREE cookbook!
About meCookbookContactWork with me
Home » Extra Fudgy Pumpkin Brownies

Perfectly fudgy, swirled through with a spice-filled pumpkin pie filling AND easy to make – there’s nothing not to love about these amazing pumpkin brownies. If you’re looking for your new favourite fall dessert… look no further. 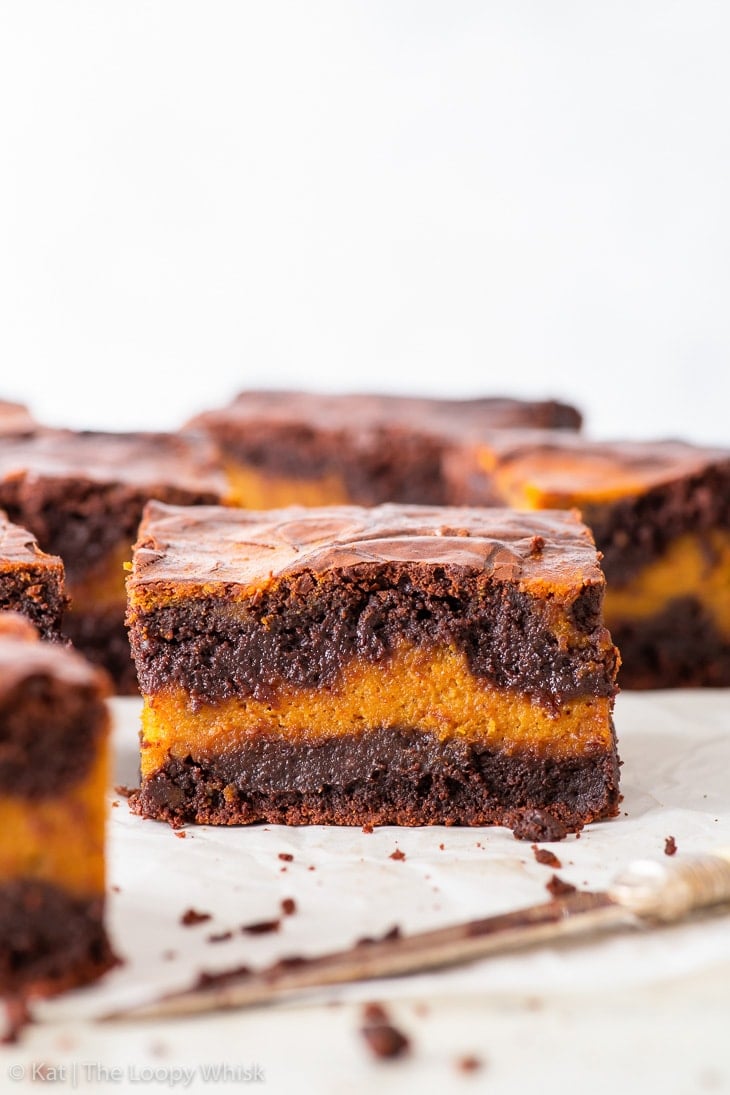 Hi friend. Yes, I know it’s only the beginning of September… but here I am, shoving pumpkin and cinnamon and nutmeg in your face. I’d apologise… but I’m really not sorry at all – because these pumpkin brownies are THE BOMB and you need to hear all about them (and make them) ASAP.

Now, I’ll be the first to admit that I’m not the biggest fan of pumpkin desserts out there. And yes, I was quite a bit sceptical about the chocolate-pumpkin combo. But… I stand corrected. Like, I seriously couldn’t have been more wrong.

These pumpkin brownies are officially some of THE BEST BROWNIES I’ve ever made or eaten… and with the number of brownie recipes on this blog alone – that’s saying something.

Before we get to the bits and bobs of making these amazing brownies – if you like what you’re seeing, subscribe to my newsletter to keep up to date on the latest recipes and tips!

5 reasons for why these pumpkin brownies are amazing

1. The texture – The brownies are fudgy, bordering on gooey… which I’m sure we can all agree is the perfect brownie texture. The pumpkin filling helps keep them nice and fudgy for days… not that they could possibly last that long.

2. The flavour combination – As it turns out, the combination of bitter-sweet chocolatey brownies with the spice-filled pumpkin pie filling is absolutely divine. The gentle notes of cinnamon, nutmeg and ginger give the brownies an extra warmth, and the overall effect is one of decadence – comfort food at its best.

3. They’re pretty – I don’t know about you, but that burst of bright orange filling combined with the chocolatey brown fudgy brownies gets me drooling every. single. time.

4. SO. EASY. TO. MAKE. – I promise you, these pumpkin brownies couldn’t be easier to make if they tried.

5. Gluten free – That’s right, this delicious fudginess is gluten free! Of course, if that’s not a requirement for you, you can easily make them with plain all-purpose flour (and omit the xanthan gum).

How do you make pumpkin brownies?

The ingredients to make these delicious pumpkin brownies are all the usual suspects, with a few fall baking staples thrown into the mix. (For the full recipe, including the ingredient quantities, scroll down to the bottom of the page.)

For the brownie batter:

For the pumpkin pie filling:

And to make the pumpkin brownies:

How simple was that?! This recipe is basically just a whole lotta mixing with a bit of swirling at the end… minimal effort, no fuss, with guaranteed delicious results. 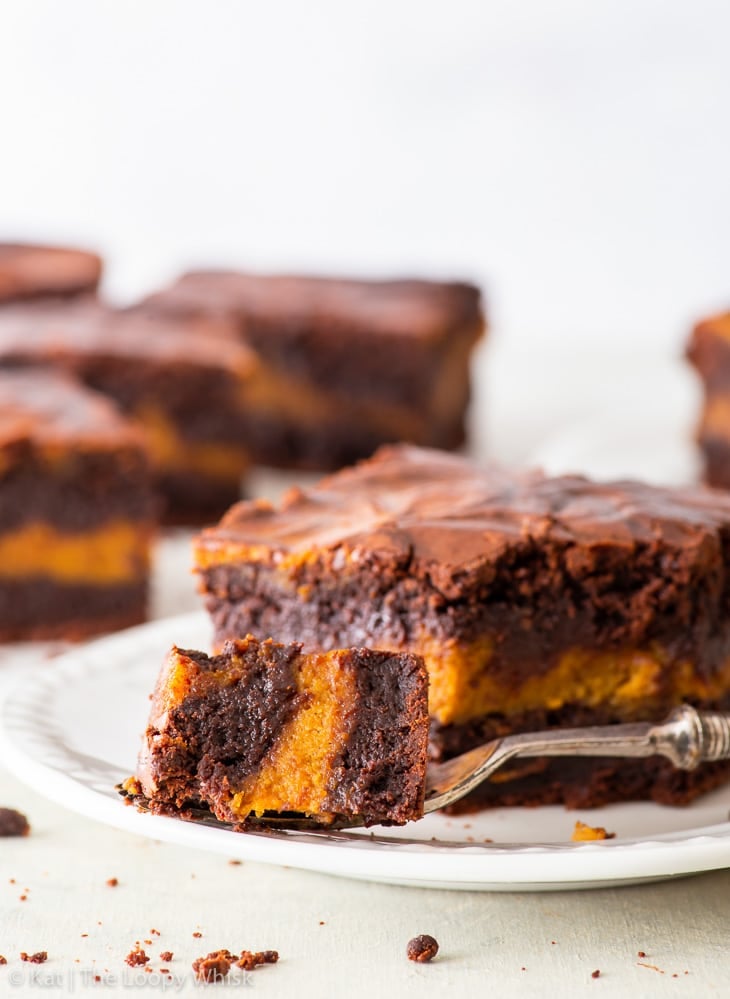 How long do you bake pumpkin brownies?

Because of the added moisture from the pumpkin pie filling, these brownies bake slightly longer than usual. I baked them in an 8×8 inch (20×20 cm) square baking tin, and they were baked perfectly at 355 ºF (180 ºC) for about 45 minutes. They came out of the oven with a thin, slightly crunchy top crust and a deliciously fudgy interior.

Depending on the pan you use (and your oven calibration), the baking time might vary slightly – I recommend you use the toothpick test to check when your brownies are done.

To do this, insert a toothpick or skewer into the middle of your brownies. If it comes out with many moist crumbs attached, the brownies are done – and they will be perfectly fudgy. For gooey brownies, look for some half-baked batter on the toothpick in addition to moist crumbs.

(Note that unlike for cakes, you really don’t want the toothpick to come out clean. A clean toothpick means your brownies are probably over-baked and might be dry.) 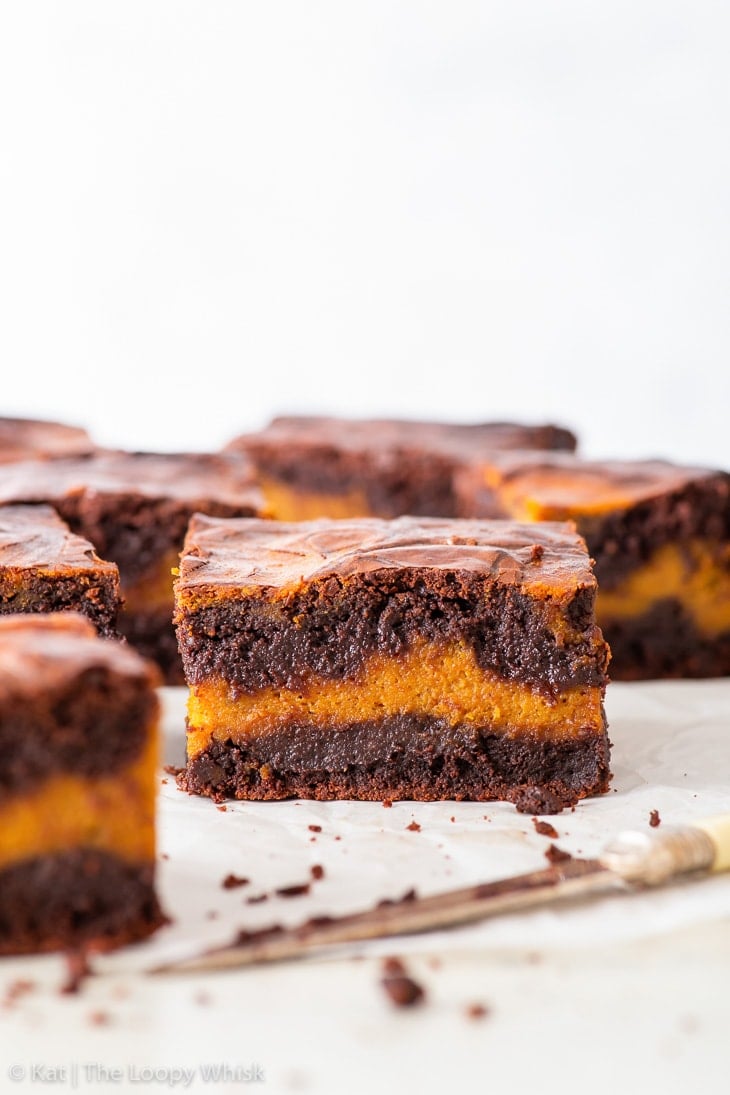 How do you make healthy brownies?

If you want to make your brownies a bit healthier, I recommend you check out my Super Fudgy Healthy Brownies and the Paleo Pumpkin Brownies! Both recipes are gluten, grain, dairy and refined sugar free – and super delicious.

Believe me, you definitely can’t tell they’re healthy as far as brownies go: they’re just as indulgent, luxurious and mouth-watering as your regular favourite brownie recipe.

Why do brownies sometimes sink in the middle?

When the brownies come out of the oven, they’re often slightly puffed up – but then, on cooling, they often collapse a bit and sink in the middle. That’s no cause for panic; in fact, it only means that you brownies will be nice and fudgy and/or gooey.

Because of their fudginess, brownies lack the sturdier internal structure of a sponge cake and other bakes. Without that structure (think of the fluffy, even crumb of a sponge), the brownies have nothing to “hold them up” as they cool – and as a consequence, they sink in the middle.

How do you serve pumpkin brownies?

Honestly, so long as there’s brownies around, it doesn’t really matter all that much how you serve them – people will just be (deliriously) happy there’s a fudgy chocolatey deliciousness to be enjoyed.

That said, warm brownies are amazing served with a generous scoop of ice cream, a drizzle of salted caramel or chocolate fudge sauce, maybe a sprinkling of chopped toasted nuts (pecans would be amazing)… the sky’s the limit here. 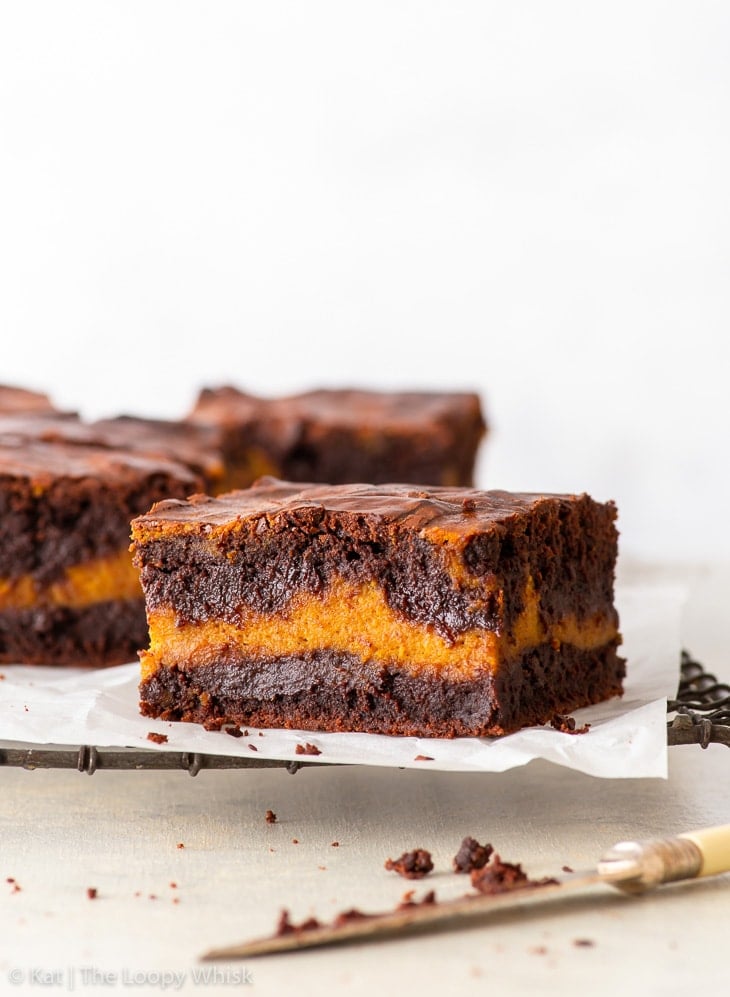 However you serve them – I hope you enjoy and savour and love them as much as I do. And to finish off this post that’s turning out slightly longer than expected (I swear I could talk about chocolate and brownies forever and ever), I’ll let you in on a little secret:

If you can bear to not eat all the brownies on the very first day (I know it’s a stretch and, oh, the willpower that requires!) – these pumpkin brownies are better on the second and AT THEIR BEST on the third day. By then, the moisture from the pumpkin filling has had time to work its magic, and the brownies go from soft+fudgy to fudgy+chewy… and in my humble opinion, in the world of brownies, it truly doesn’t get much better than that. 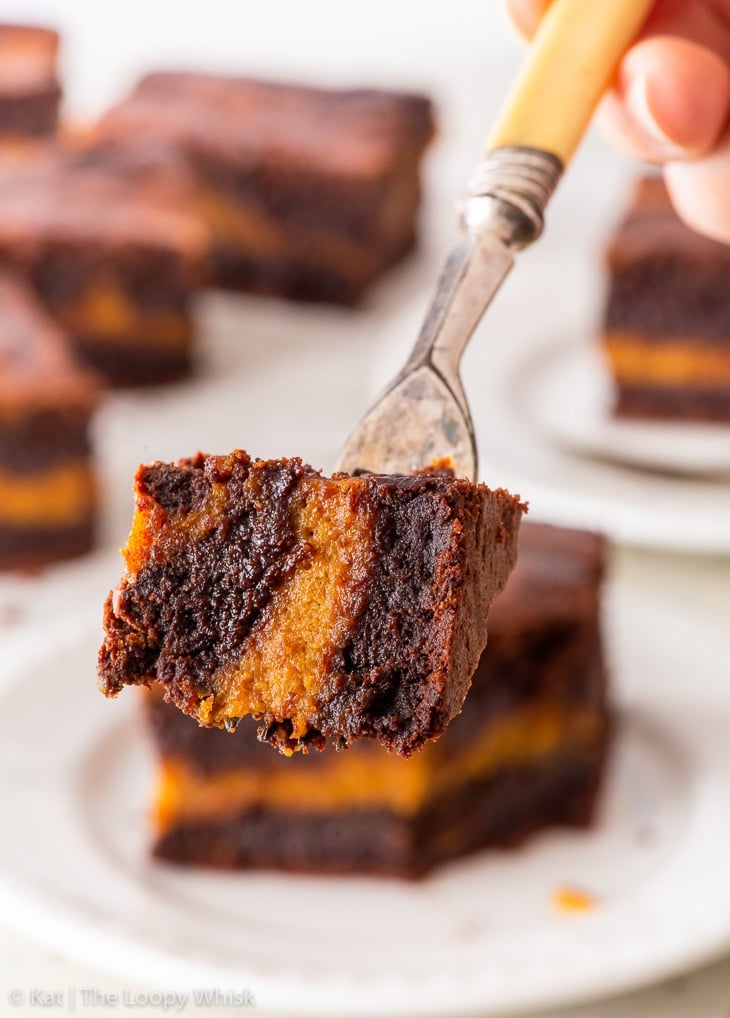 Perfectly fudgy, swirled through with a spice-filled pumpkin pie filling AND easy to make – there’s nothing not to love about these amazing pumpkin brownies. If you’re looking for your new favourite fall dessert… look no further.
Print Rate
4 from 1 vote
Prep Time 20 mins
Cook/Bake Time 45 mins
Servings 12
Author Kat | The Loopy Whisk 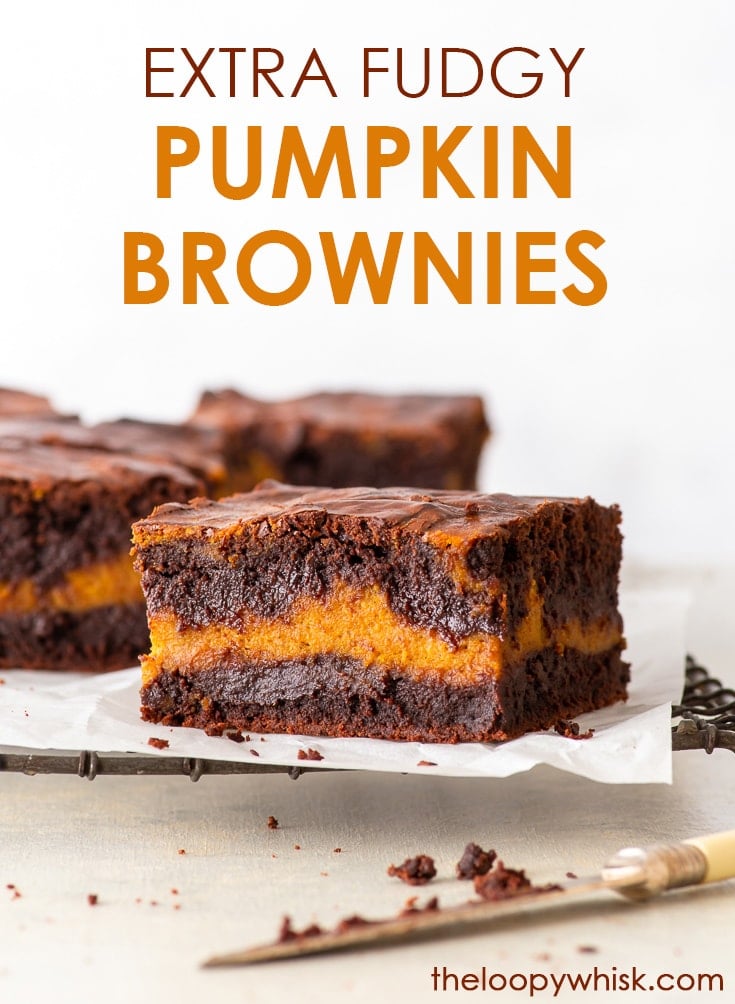 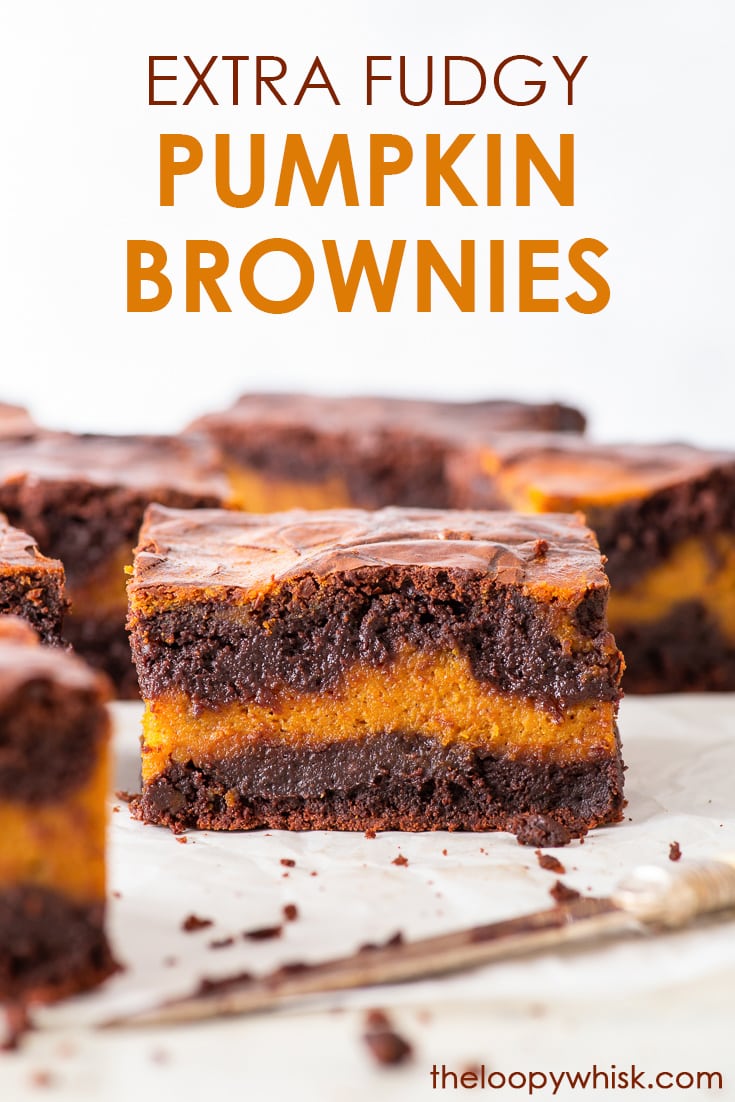