Skip to content
Order my GLUTEN-FREE cookbook!
About meCookbookContactWork with me
Home » Raspberry Brownie Cupcakes 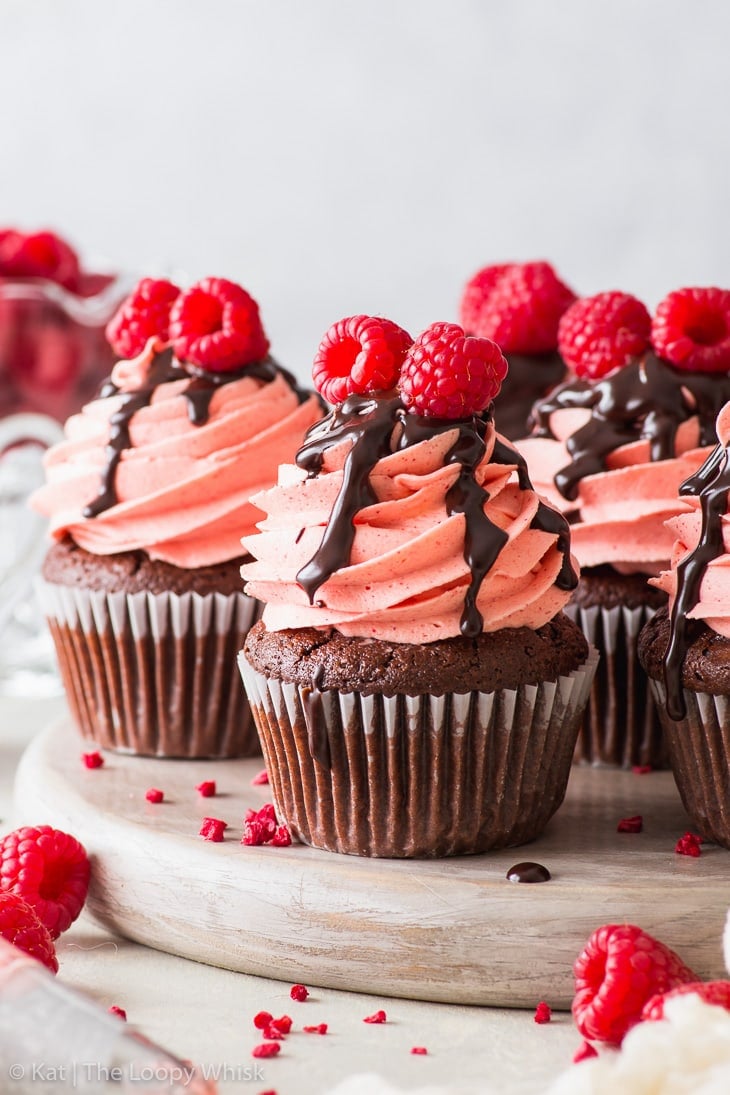 I never thought I’d say it. But there are cupcakes that are BETTER THAN CHOCOLATE CUPCAKES. They’re called brownie cupcakes, and I’m officially in choco-love.

They’re chocolatey and moist, bordering on fudgy… and pretty much everything you never knew you needed in a cupcake. In a word, they are perfect. 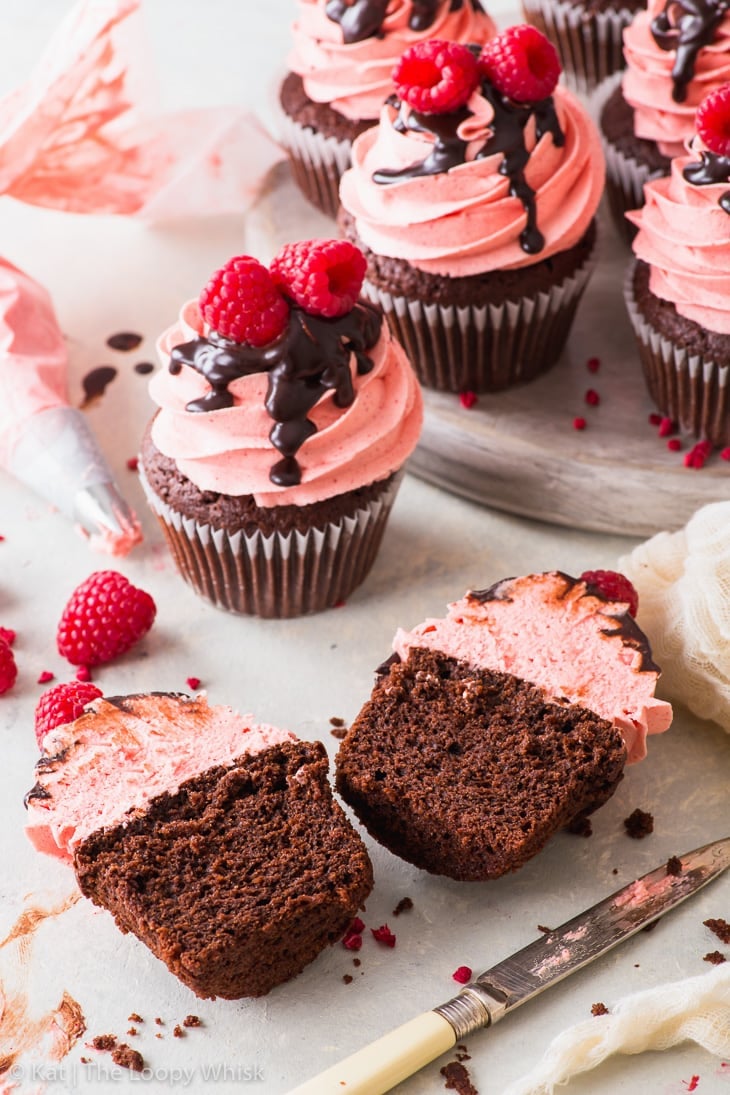 Because we all know that chocolate and raspberries are basically a match made in food heaven, the brownie cupcakes are paired with a pretty pink raspberry buttercream.

There’s a trick to packing this buttercream full of intense raspberry flavour, without it splitting due to the addition of too much liquid in the form of a raspberry reduction (my usual go-to ingredient when it comes to adding raspberry flavour to desserts).

Instead, we’ll use freeze dried raspberries – we’ll process them with powdered sugar to get powdery, sugary raspberry goodness, and then whip it up together with softened butter into delicious raspberry buttercream. 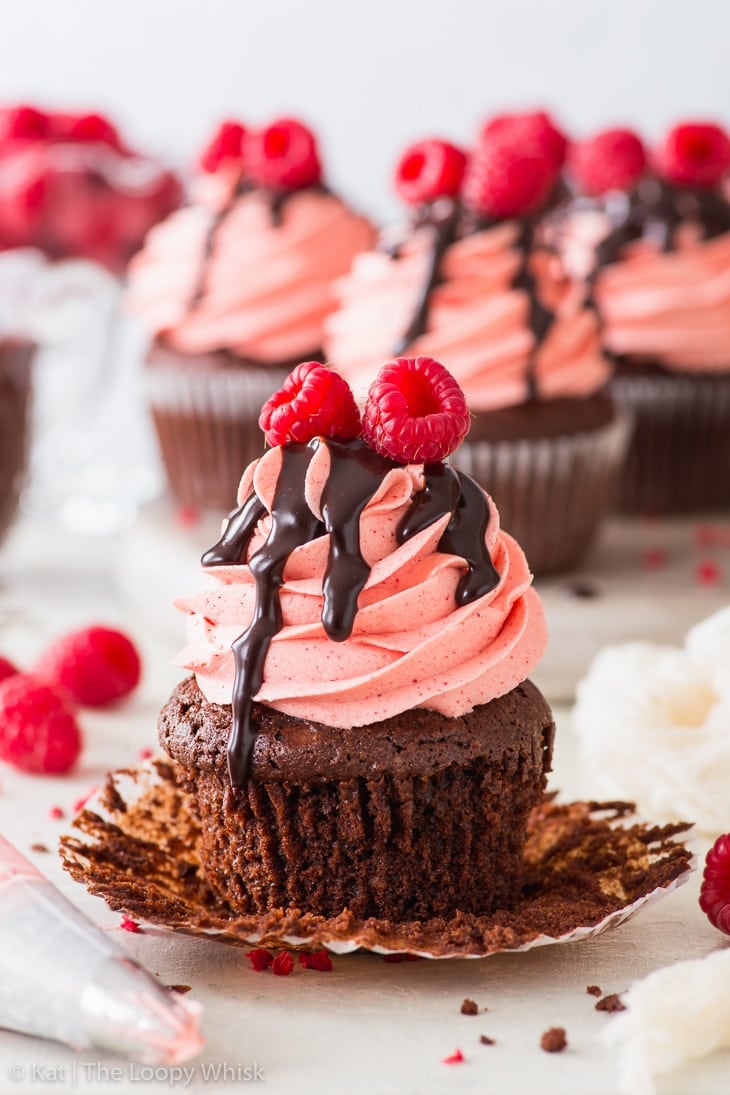 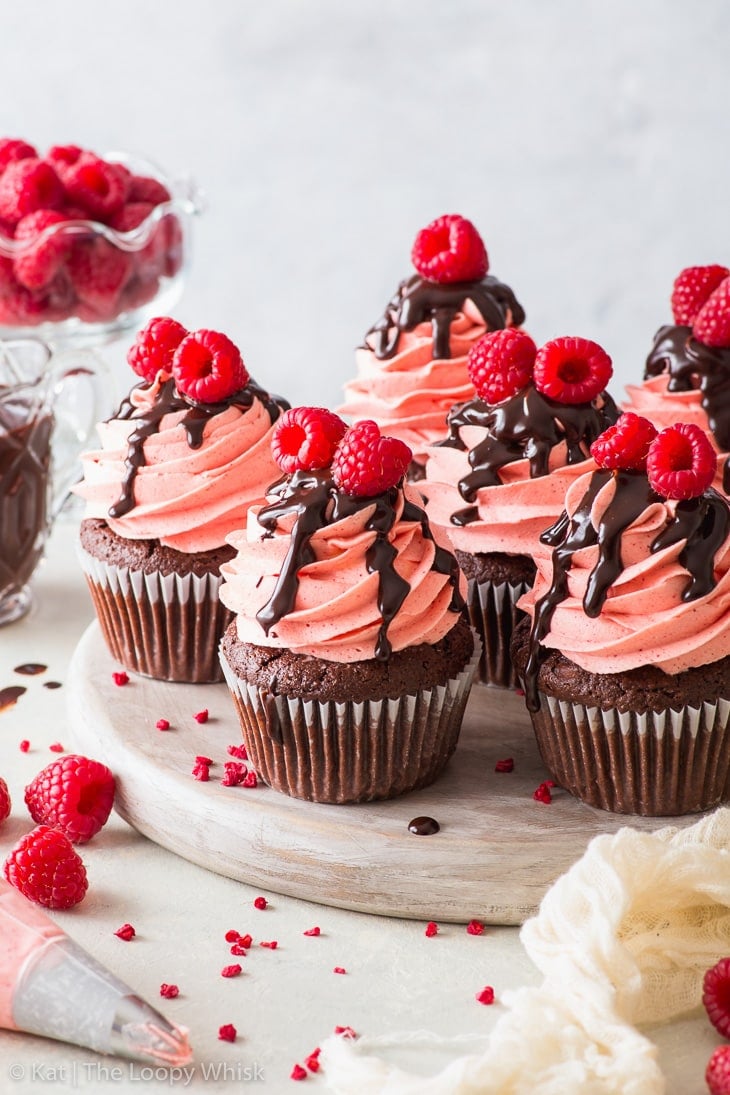 Now, we all know that when it comes to chocolate, more is more… so let’s throw some chocolate fudge sauce into the mix. It works wonders, drizzled on top of the beautiful swirls of raspberry buttercream – it’s luscious, luxurious and I really just want to eat it by the spoonful.

A few fresh raspberries finish off this wonderful dessert, and bring with them a tangy freshness that balances out the bittersweetness of the brownie cupcakes and chocolate sauce.

There are a hundred and one reasons to make and love these raspberry brownie cupcakes, but here are the top 5:

But, let’s be honest… reason #1 is really all you need to know. 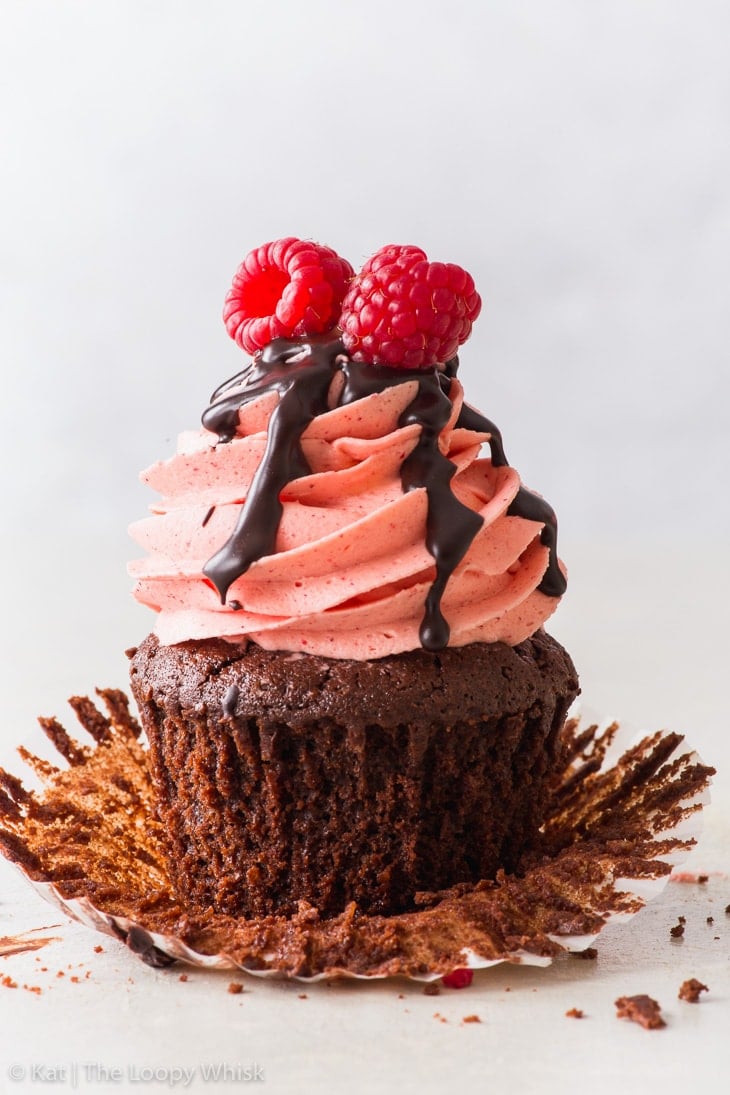 These raspberry brownie cupcakes are everything you never knew you needed in a cupcake. The brownie cupcakes are intensely chocolatey and perfectly fudgy, the raspberry buttercream tastes like an absolute dream, and the chocolate fudge sauce will simply blow your mind.
Print Rate
Prep Time 45 mins
Cook/Bake Time 25 mins
Total Time 1 hr 10 mins
Servings 12
Author Kat | The Loopy Whisk 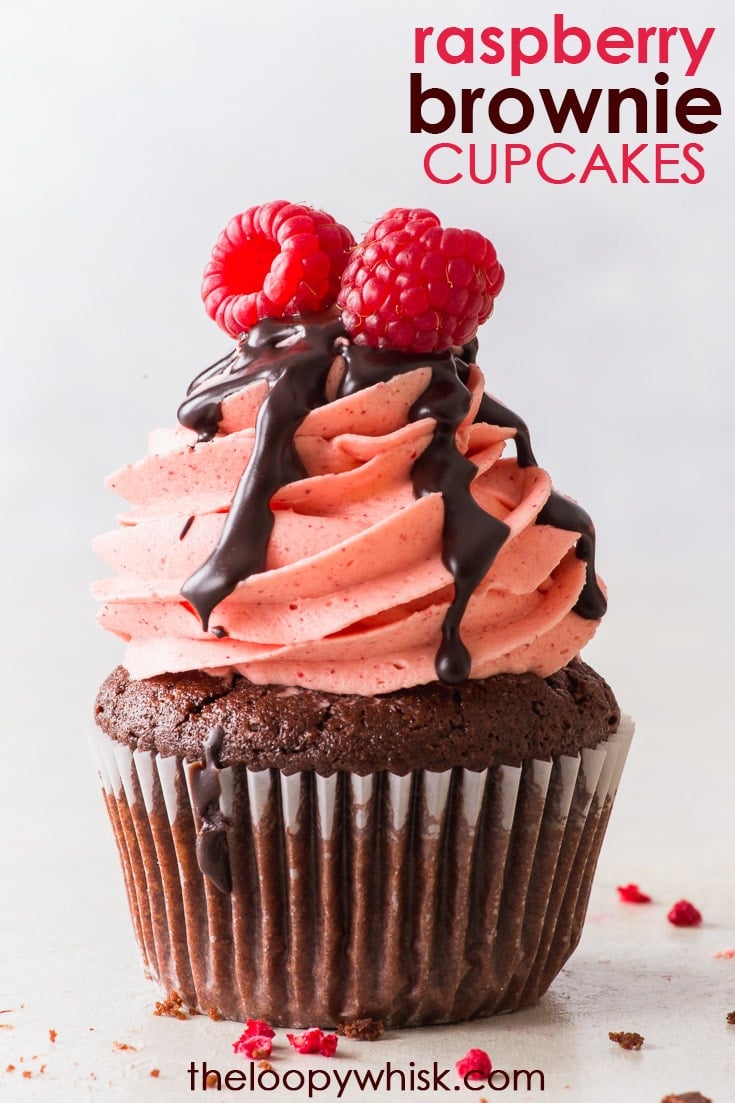 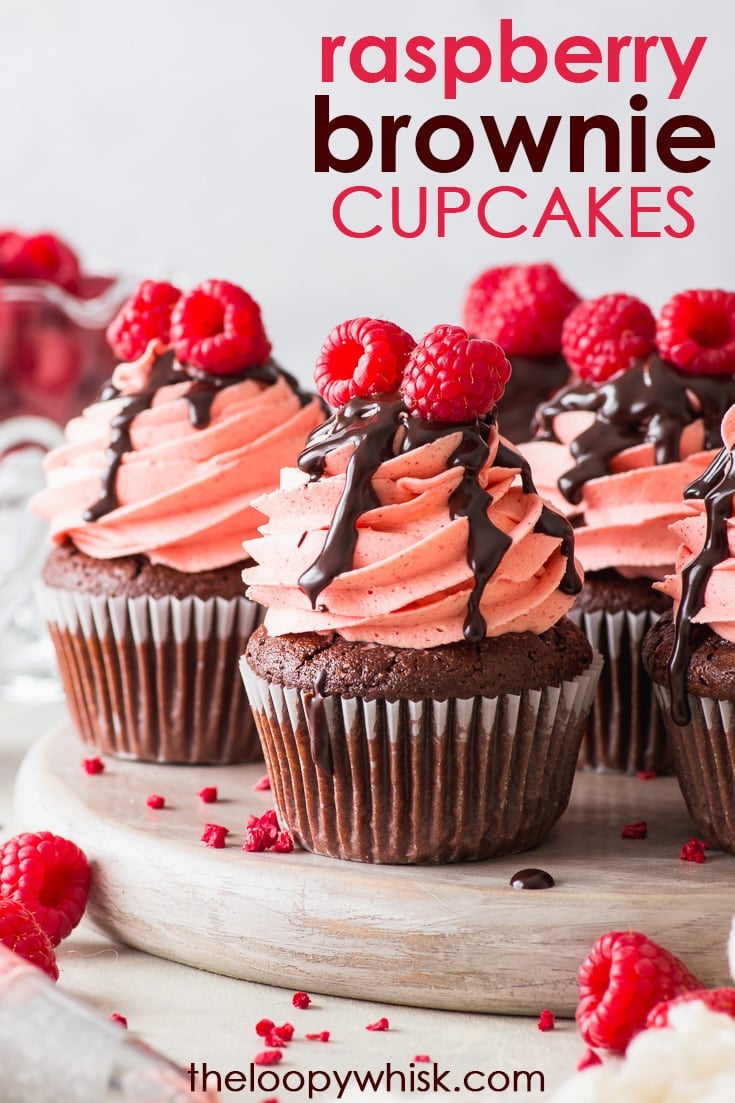