Skip to content
Order my GLUTEN-FREE cookbook!
About meCookbookContactWork with me
Home » Vegan Raspberry & Lemon Cake

This vegan raspberry & lemon cake is as pretty as it is delicious. With fluffy, moist vegan sponges generously scented with lemon zest, a luscious vegan frosting, a refreshing vegan lemon curd and an abundance of fresh raspberries, it’s everything you might want a cake to be – and more. The perfect dessert to make this Easter!

This post has been created in collaboration with Aldi UK. All opinions expressed in the post are my own… plus, there’s a whole lotta cake – so read on. (For more information you can check out my Disclosure Policy.) 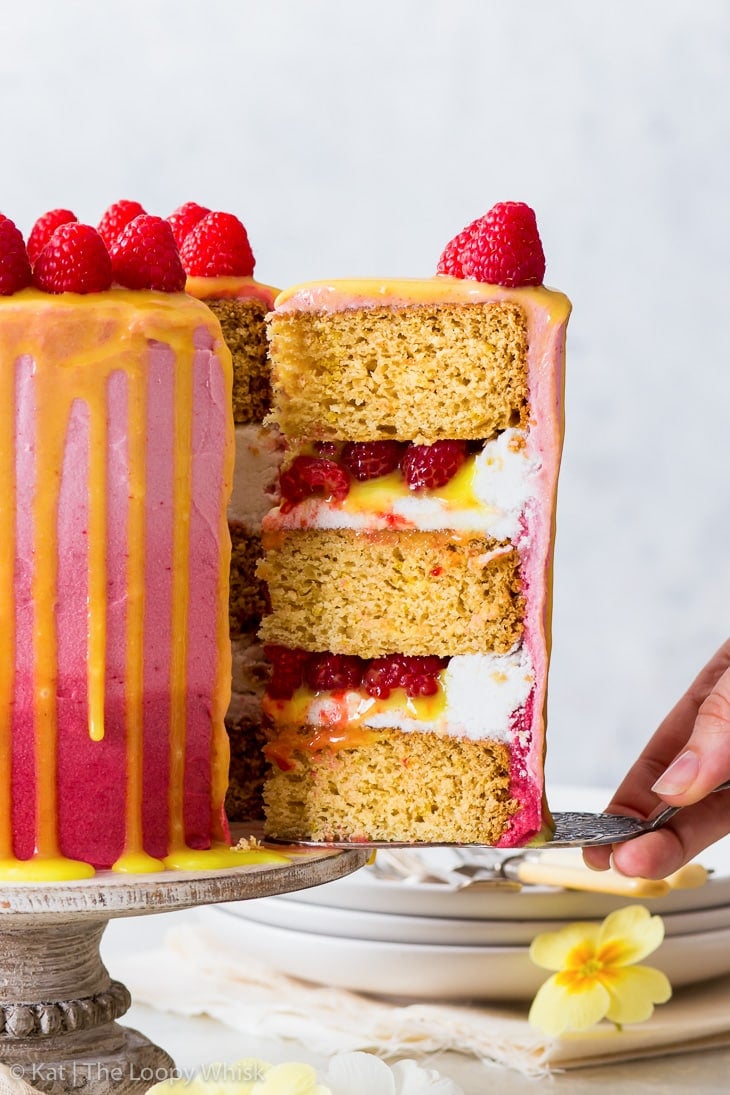 How do you celebrate spring? The blossoming and the colours and the warm sunshine that makes you want to bask in it like a lazy cat for hours on end.

How about a cake? A beauty of a cake, that will stop you in your tracks, put a smile on your face and make you reach for a fork. I think it sounds like an absolutely wonderful idea (unsurprisingly enough), so that’s exactly what I did. (And you better believe I’ll make this cake again come Easter time!)

So here’s today’s spring-inspired offering: a vegan raspberry and lemon cake, which tastes just as marvellous as it looks. And, if I do say so myself, it looks absolutely stunning. 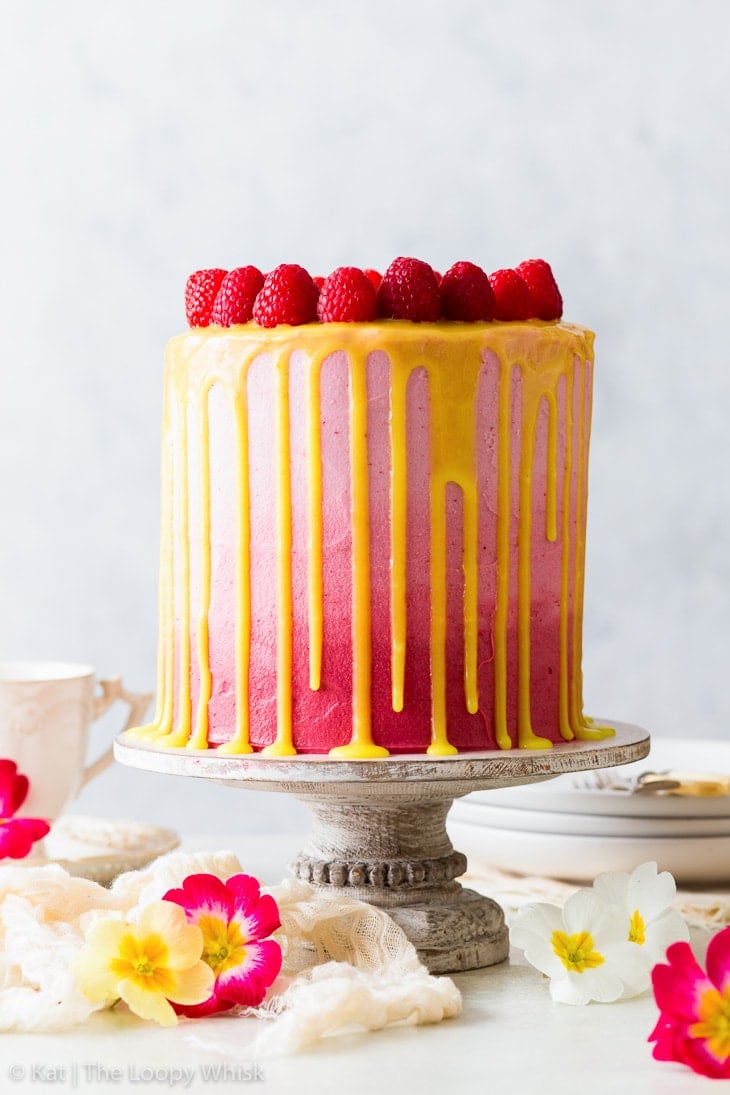 There’s a lot (of deliciousness) going on here, so let’s take a closer look:

I’m sure we can all agree that the end effect is simply… WOW. 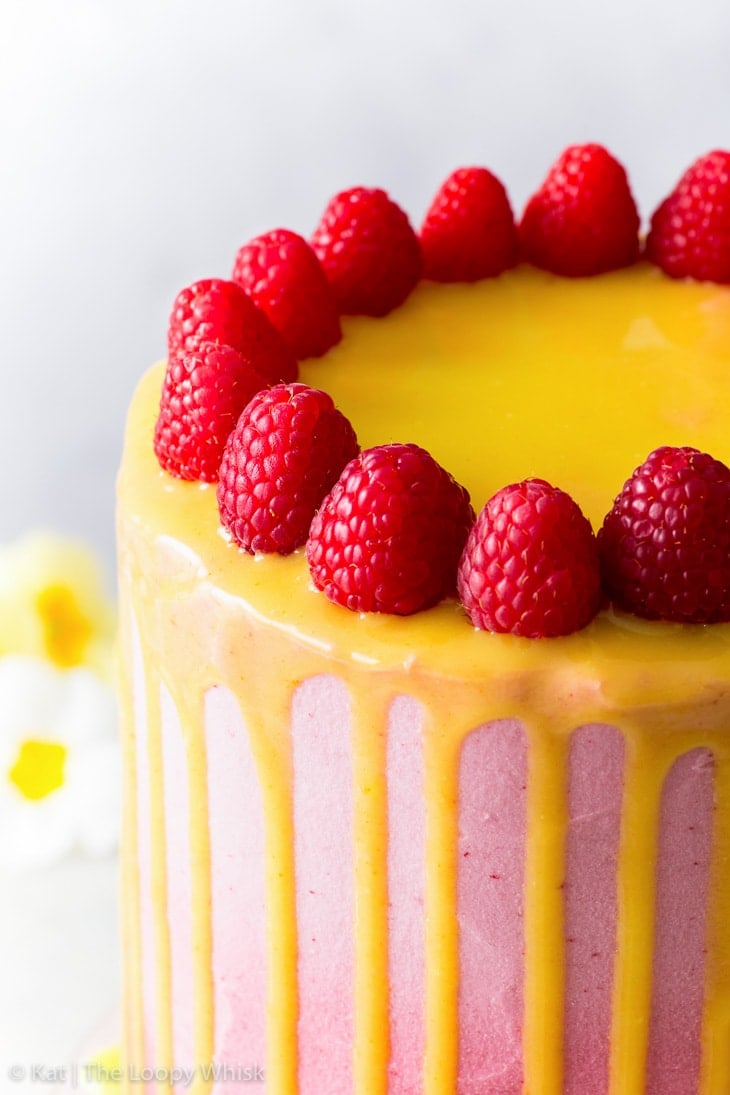 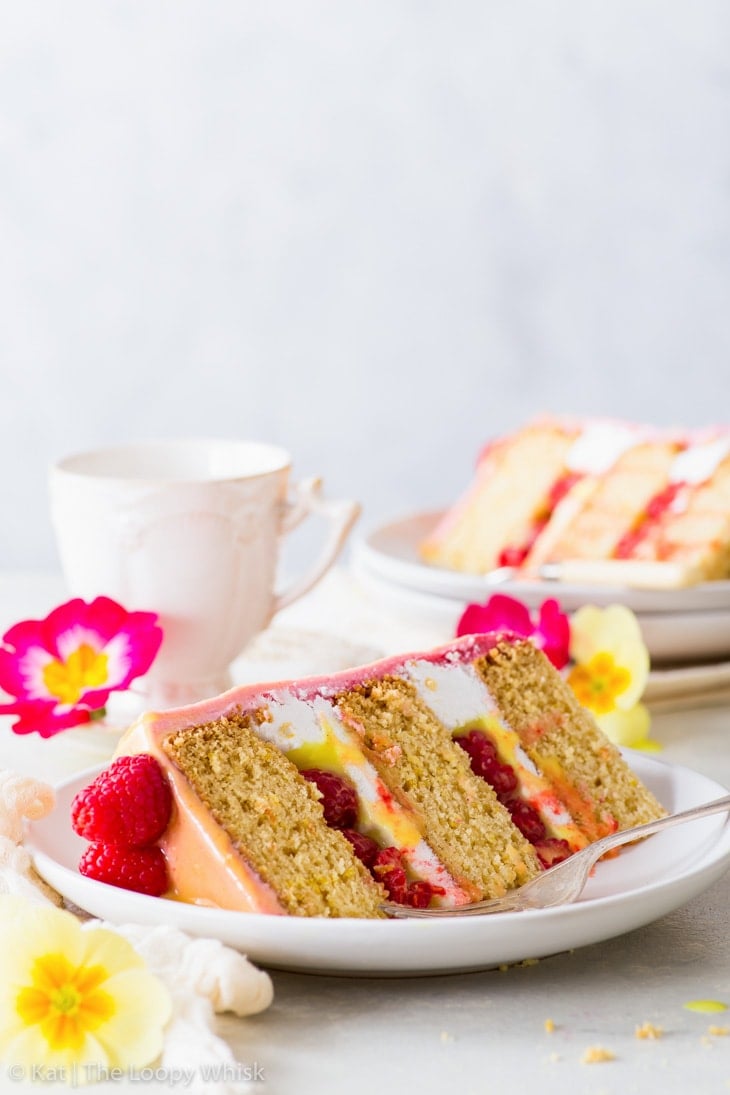 Even better, the whole cake – from the sponges to the frosting and lemon curd – is made exclusively with ingredients from Aldi UK. I love shopping at Aldi, especially when it comes to ingredients for vegan baking. Their coconut milk makes the most perfect vegan frosting, and I absolutely swear by it!

Now, this gorgeous vegan cake has many components. Inevitably, that will mean it takes slightly more time and effort to prepare… but trust me, it’s worth every single second. I mean, the results pretty much speak for themselves, don’t they? 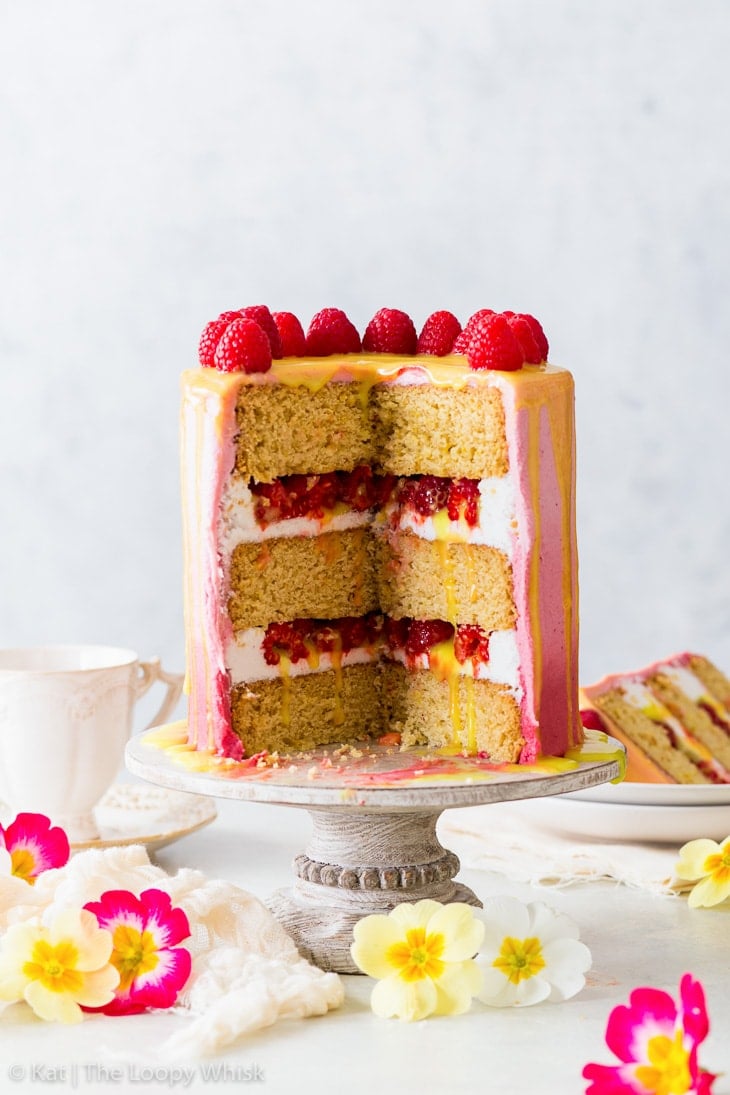 Before we get to the bits and bobs of making this wonderful cake – if you like what you’re seeing, subscribe to my newsletter to keep up to date on the latest recipes and tips!

How do you make vegan lemon cake sponges?

Making the most perfectly fluffy, moist and delicious vegan sponges is actually a piece of cake! (Yes, pun 100% intended.)

We start with the dry ingredients:

Separately, we prepare the wet ingredients: 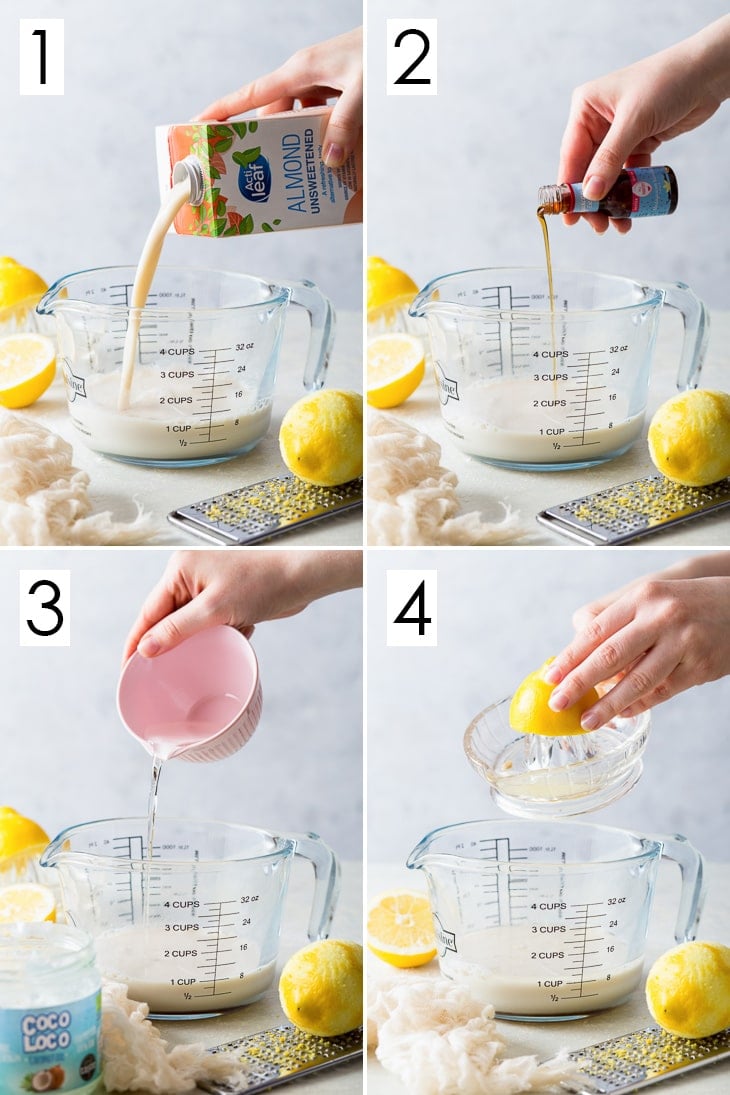 I love that this recipe gives perfectly level sponges every single time – no need to cut off any doming!

How do you make vegan lemon curd?

To make the vegan lemon curd:

Once thickened, stir in some coconut cream and coconut oil – and then, behold the wonderful lemony result! 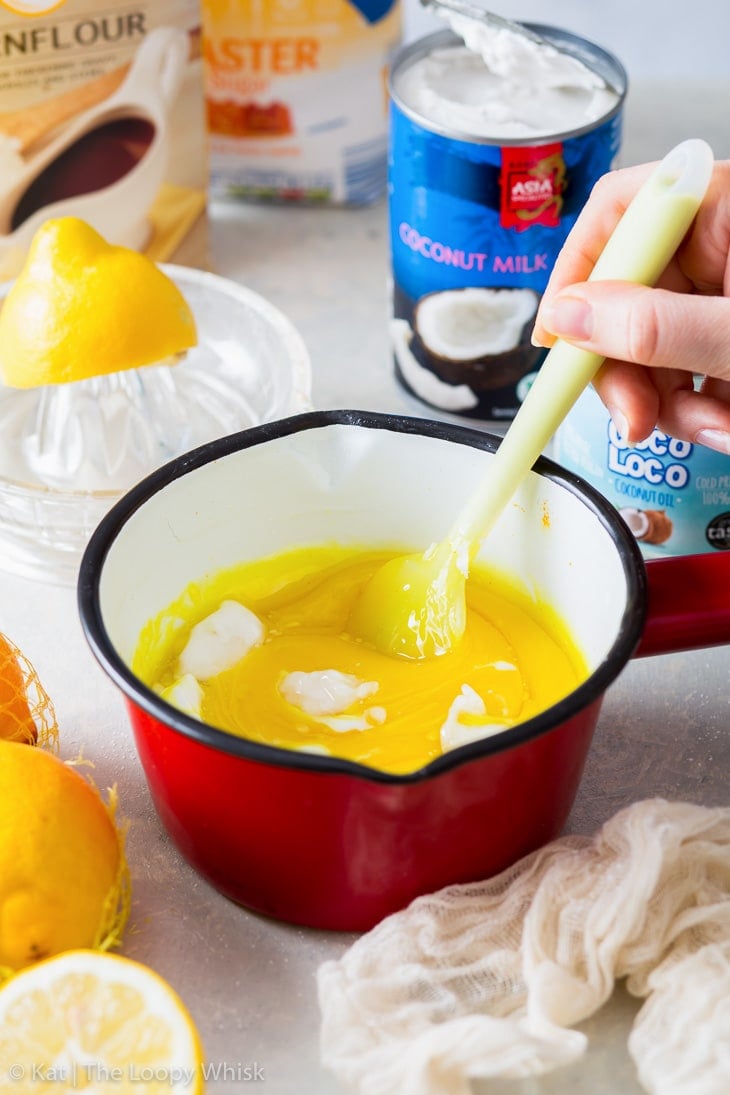 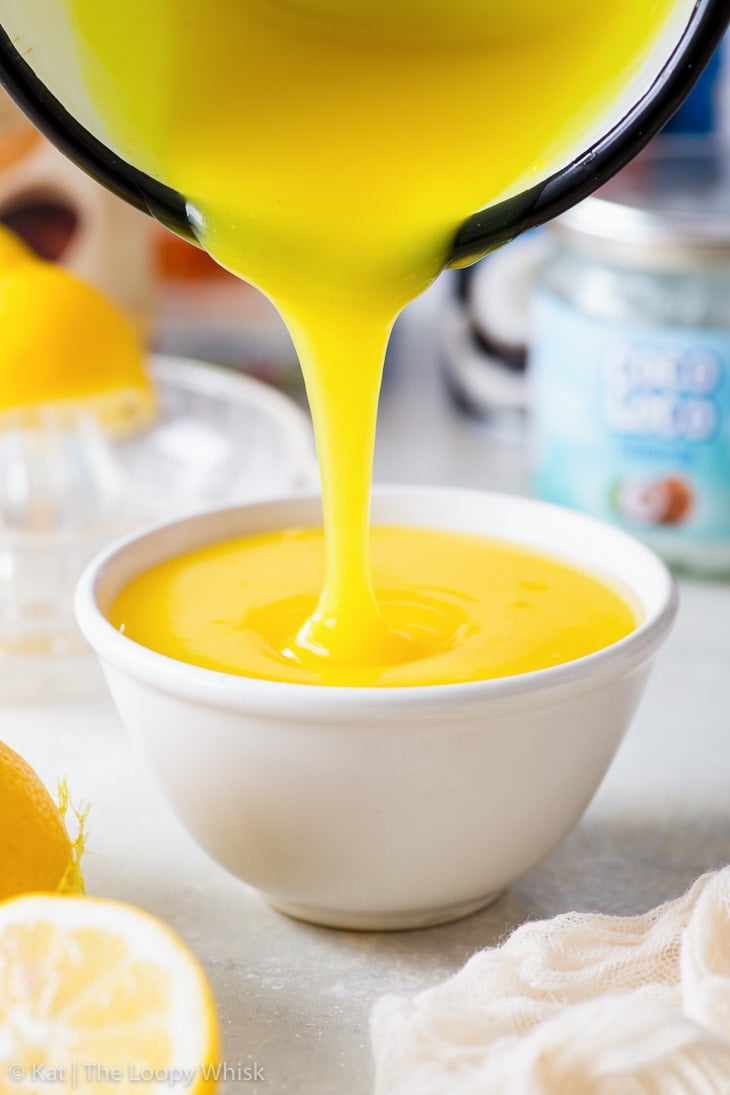 How do you make vegan frosting?

Okay, bear with me on this one. The procedure is a bit unconventional, but I promise you it works every single time and will give you the most wonderful fluffy, delicious vegan frosting that pipes and holds its shape wonderfully.

We’ll use, of course, Aldi’s coconut milk and coconut oil. They give the frosting a wonderful texture without an overwhelming coconut flavour, which is perfect for this gorgeous raspberry & lemon cake.

To make the plain vegan frosting:

The procedure for the different pink shades of the vegan raspberry frosting is pretty much the same – only in that case, you’ll need to add some of the raspberry reduction to the melted mixture before you start whipping it up. (For more details check out the recipe below!)

[NOTE: I recommend making the frosting maximum 5 to 10 minutes in advance. It tends to firm up fairly quickly, which makes it great once it’s actually on the cake or cupcakes, as it doesn’t melt or lose shape – but not so great for preparing in advance.]

Now, we come to the fun part: assembling all the individual components into the prettiest cake (ever).

First up, spread some of the plain vegan frosting onto the bottom sponge. 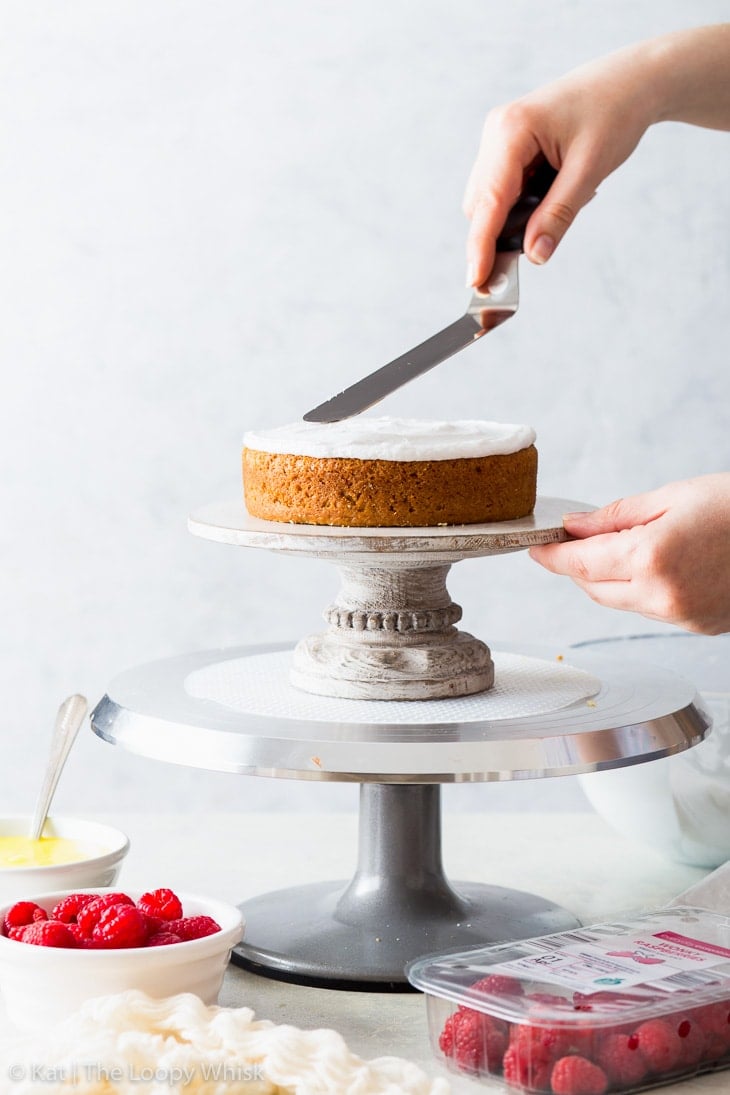 Then, pipe an additional ring of frosting on top of the layer of frosting. This will essentially act as a dam to hold in the vegan lemon curd. The ring of frosting should be about as high as the fresh raspberries (you’ll see why in a second). 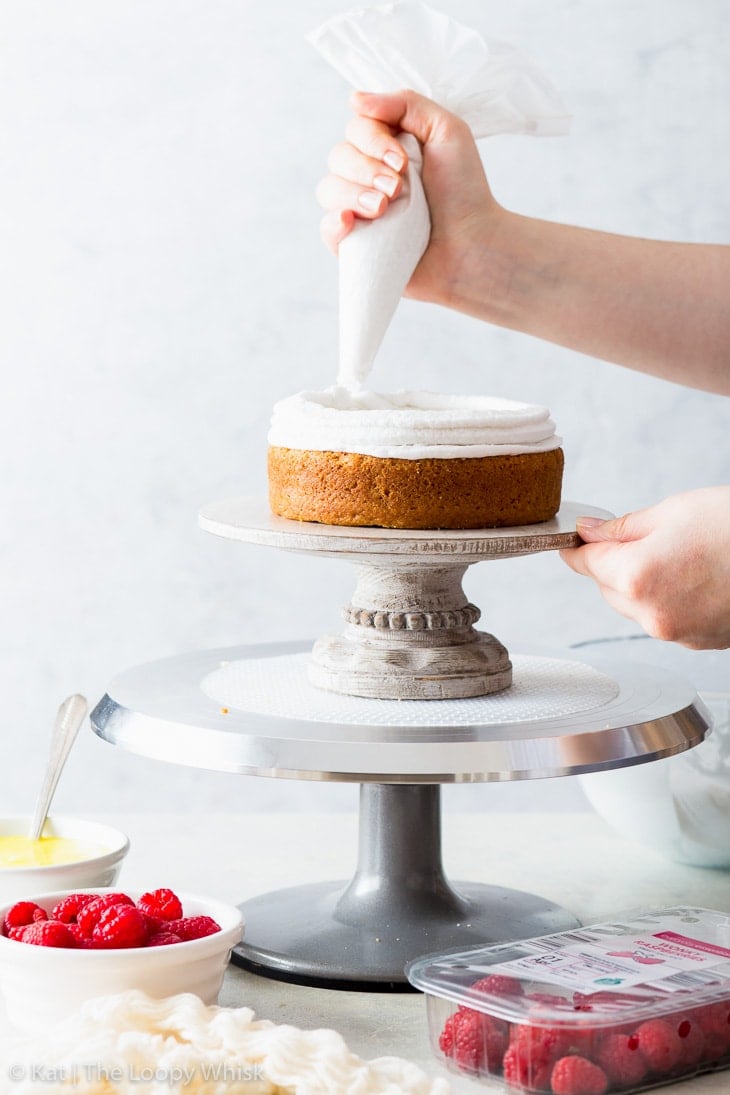 Spoon some of the lemon curd into the middle and spread it around so it forms and even layer. 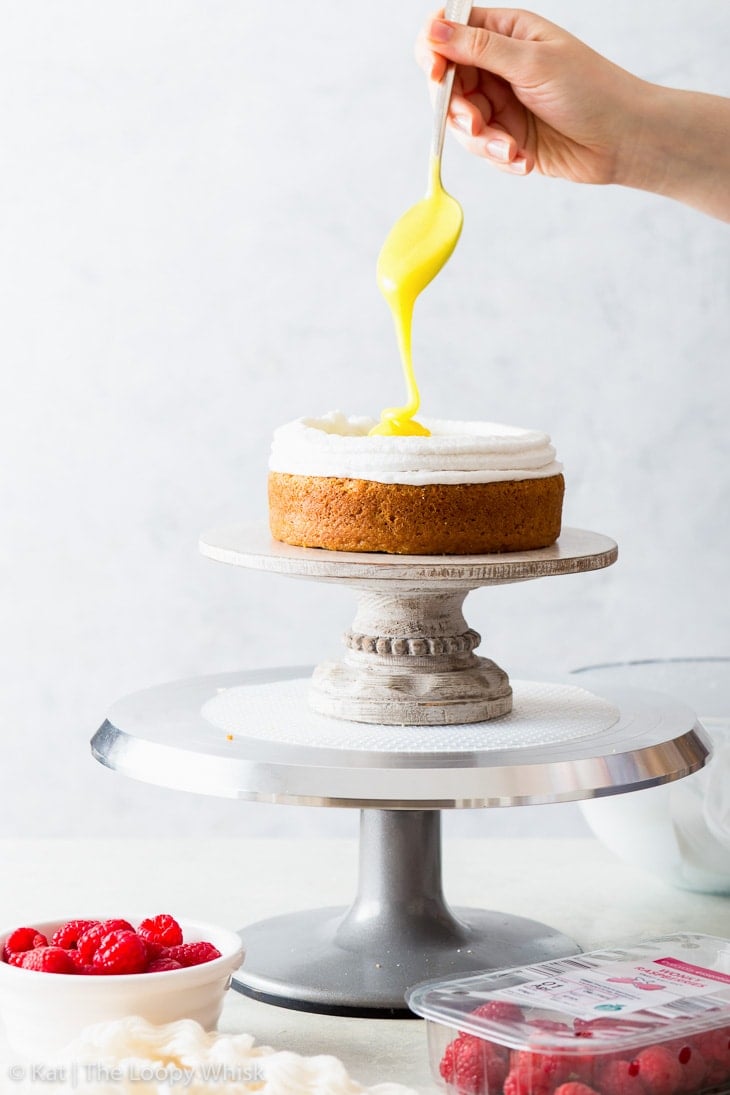 Finally, arrange some fresh raspberries on top of the lemon curd. (Together with the ring of frosting, this should give an even layer, which will easily support the next sponge.) 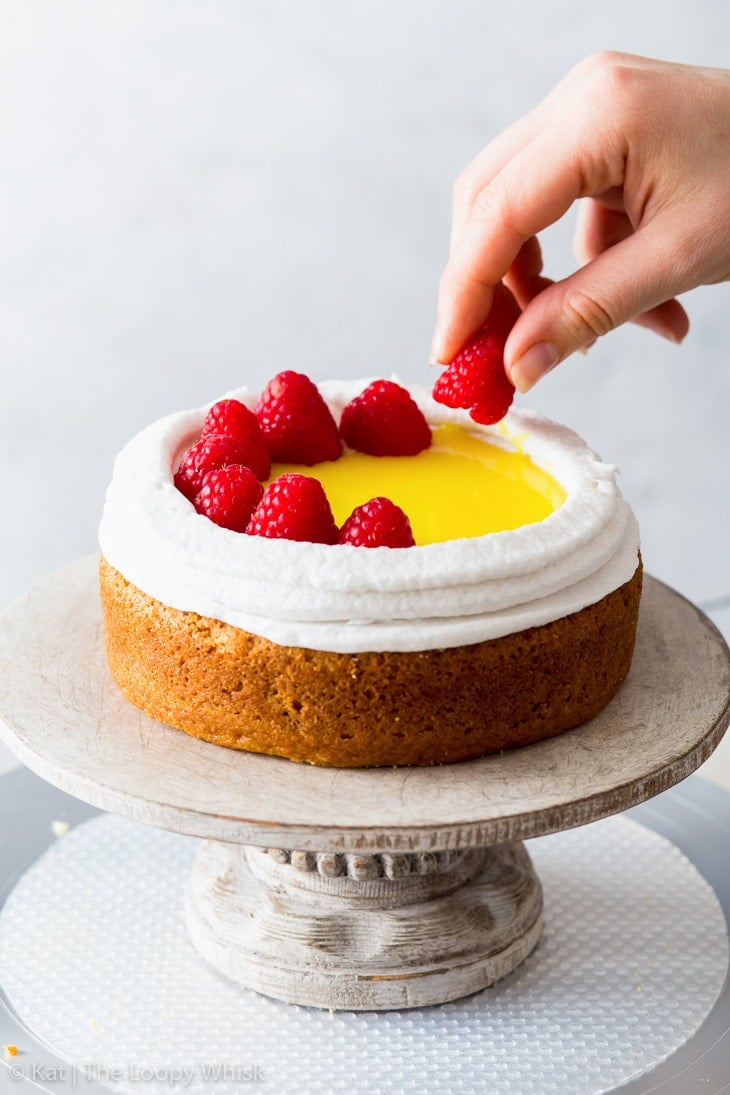 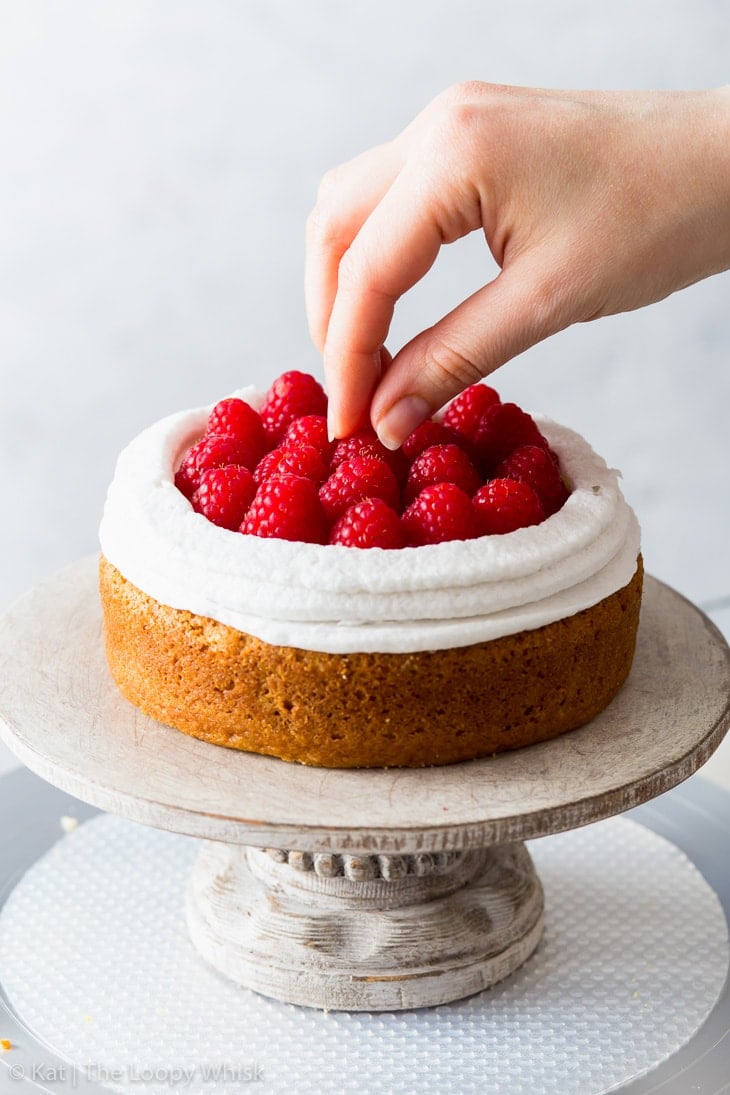 Then, repeat the same process with another layer of sponge, frosting, lemon curd and raspberries, and top with the third sponge cake. Smooth out the sides of the frosting, and refrigerate for at least 15 minutes.

This is the perfect time to prepare the three shades of raspberry frosting, which we’ll use for the pretty ombre effect!

And once the outside of the cake has been frosted and prettified: the lemon curd drip! For best results and a controlled drip, I like to use a small squeeze bottle, but you could just as easily use a spoon. Just get creative and have fun! 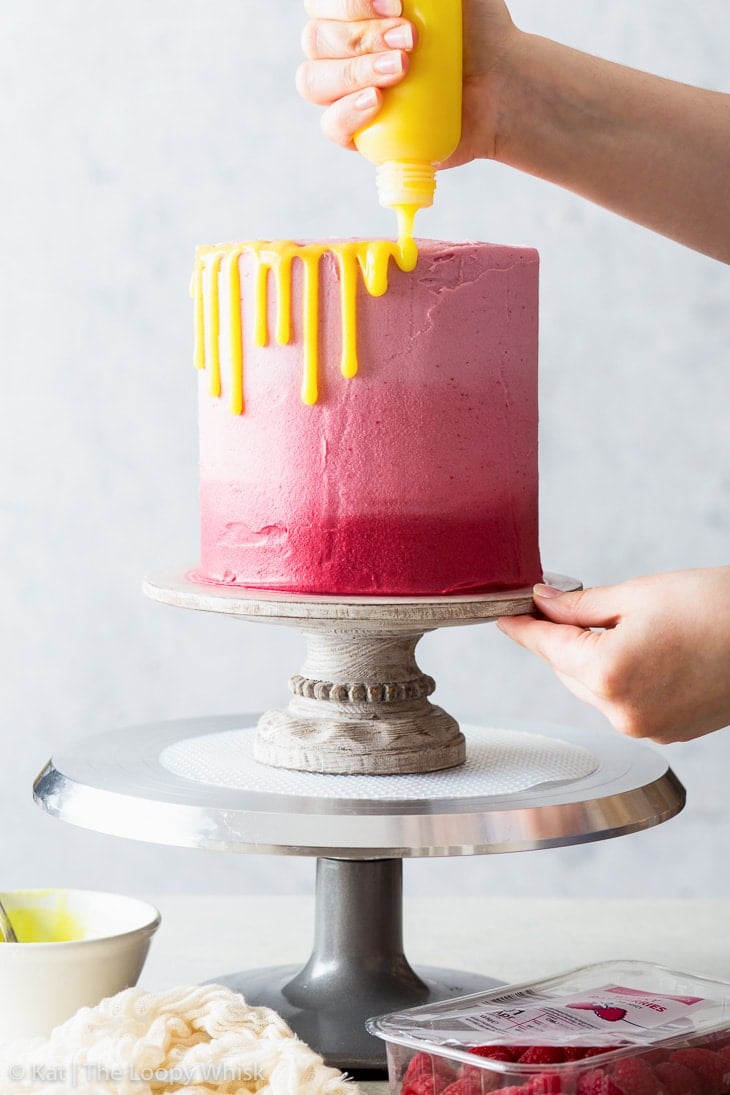 To finish everything off, the crowning glory: the crown of fresh raspberries on top of the cake. 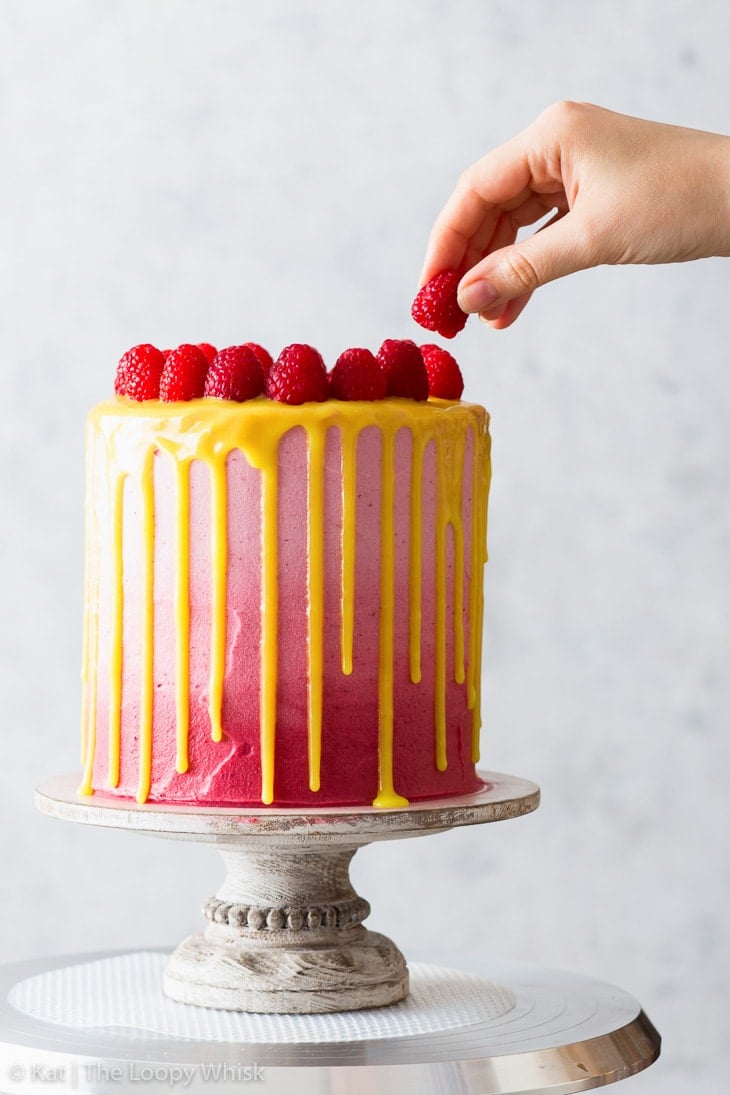 Because the cake is stunning and colourful and jaw-droppingly gorgeous as is, I kept the decorations simple. That, however, doesn’t mean that you have to do the same! You could decorate this vegan cake with edible flowers, pretty swirls of piped frosting, or even fancy vegan macarons.

But don’t let it fool you: this vegan raspberry & lemon cake is so much more than just a pretty exterior. Much more importantly, it’s delicious, with a wonderful balance of textures and flavours that complement and raise each other up to new heights.

It’s a refreshing kind of cake, where the sweetness of the frosting is tempered by the gentle acidity of fresh raspberries and lemon curd. It lifts you up, makes your tastebuds tingle and dance – and puts a smile on your face.

As far as celebrations of spring (and beautiful Easter desserts) go… this is by far my favourite one. I hope you’ll love it just as much as I do. 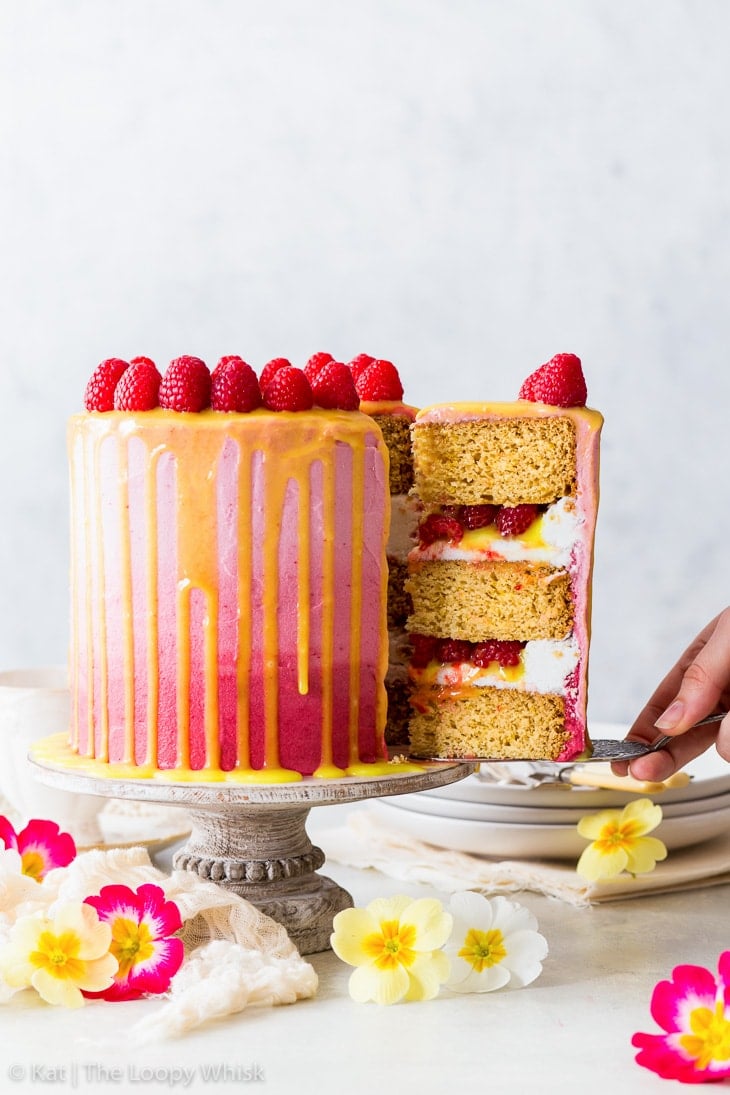 This vegan raspberry & lemon cake is as pretty as it is delicious. With fluffy, moist vegan sponges generously scented with lemon zest, a luscious vegan frosting, a refreshing vegan lemon curd and an abundance of fresh raspberries, it’s everything you might want a cake to be – and more.
Print Rate
4 from 2 votes
Prep Time 1 hr 30 mins
Cook/Bake Time 30 mins
Chilling Time 1 hr
Total Time 2 hrs
Servings 10
Author Kat | The Loopy Whisk 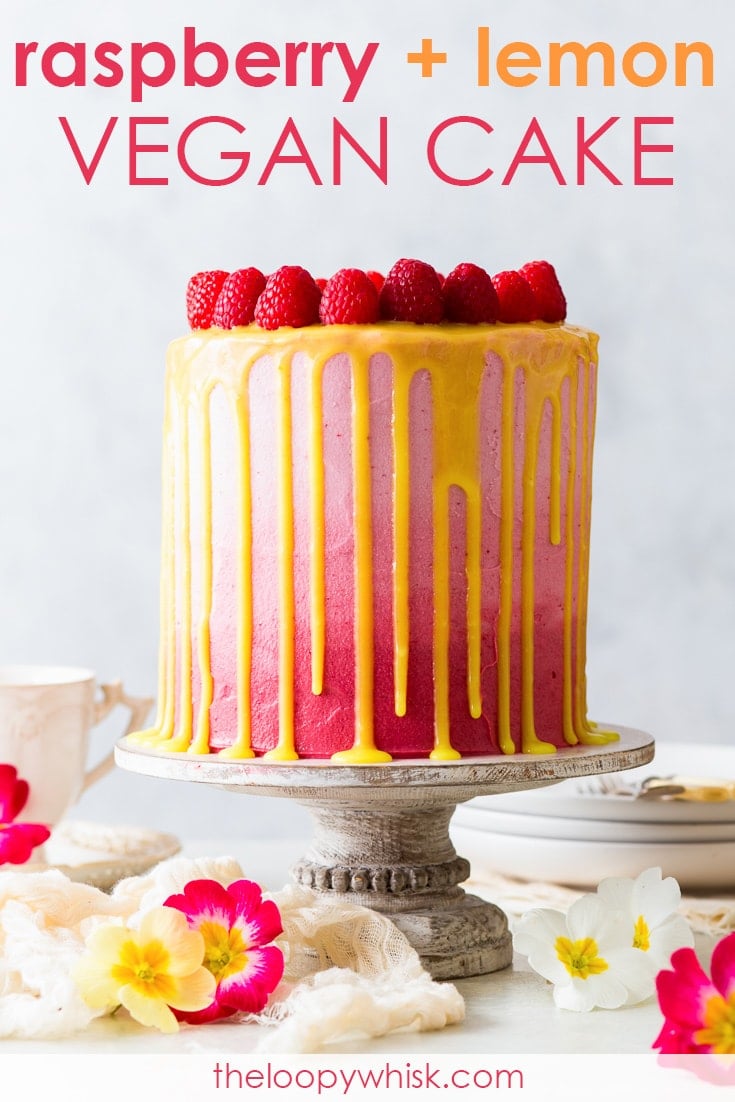 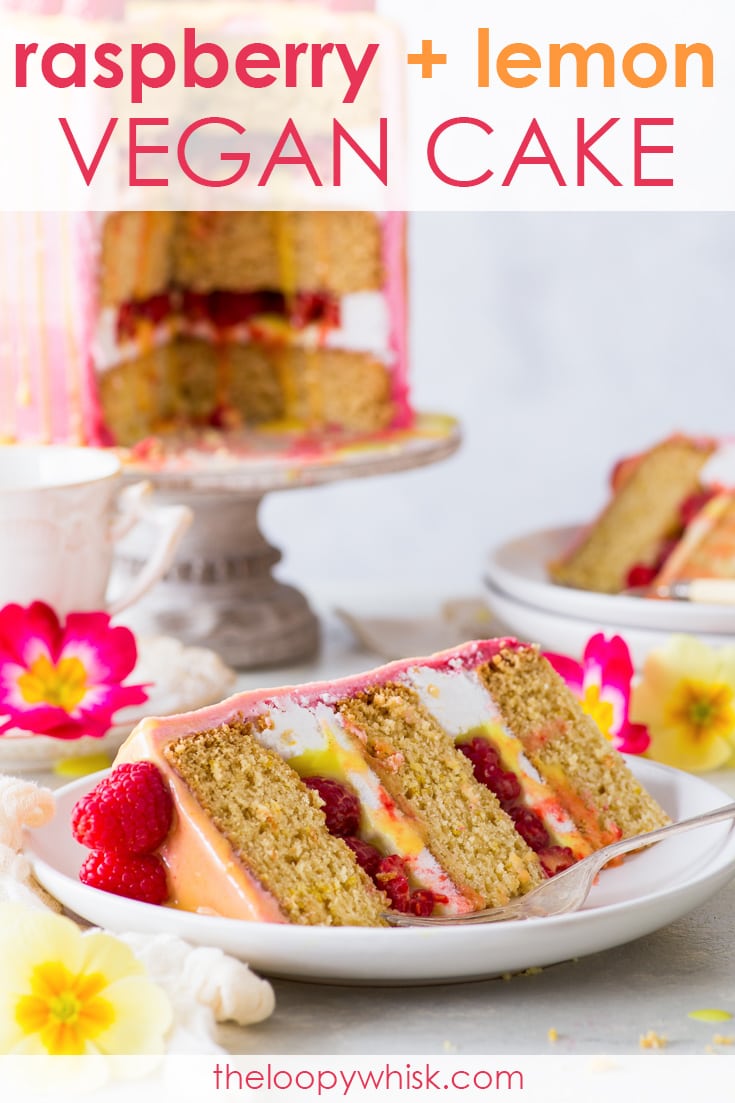 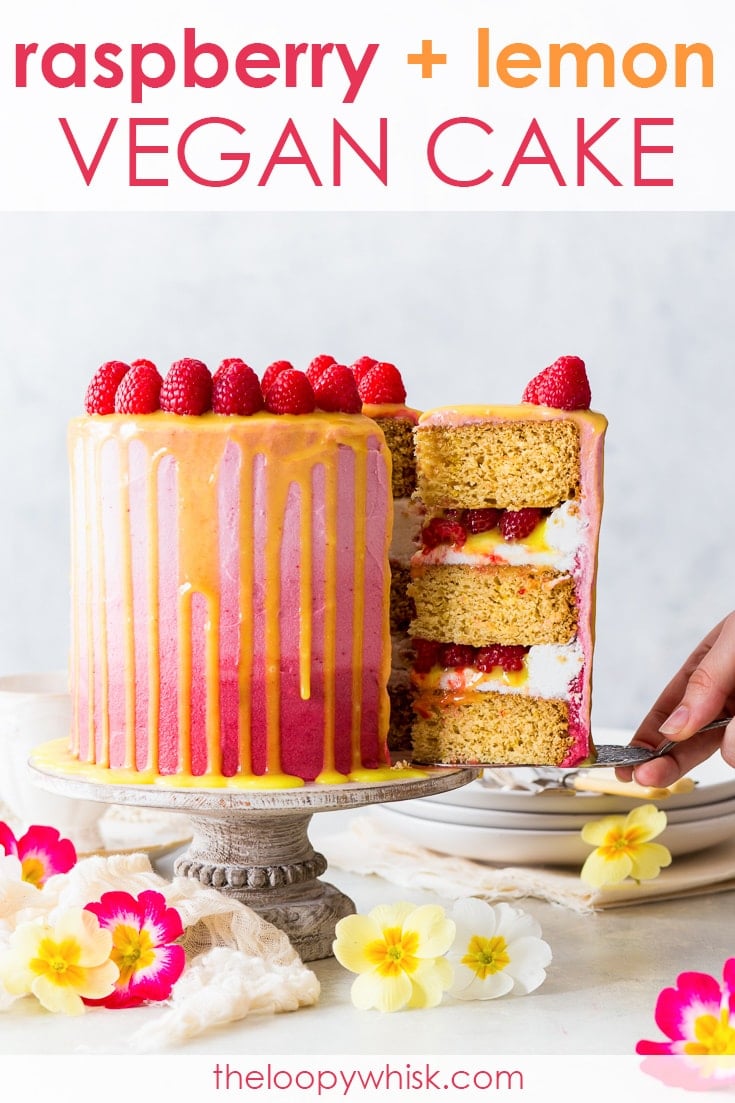 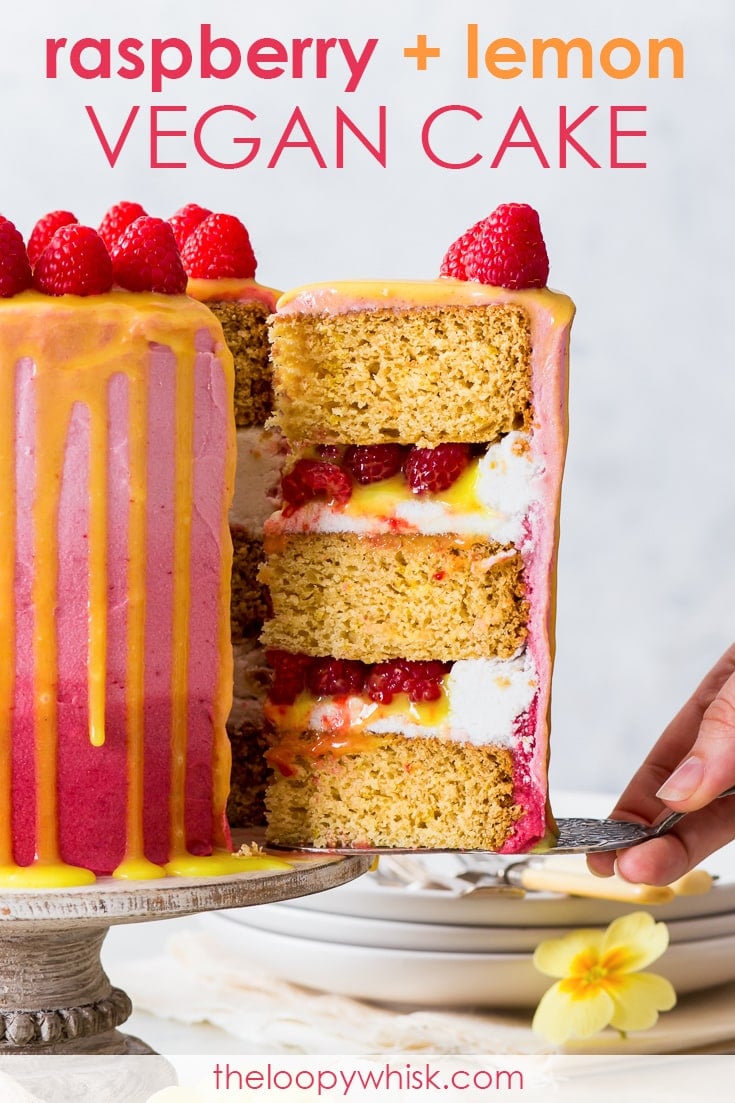