Skip to content
Order my GLUTEN-FREE cookbook!
About meCookbookContactWork with me
Home » Triple Chocolate Cupcakes 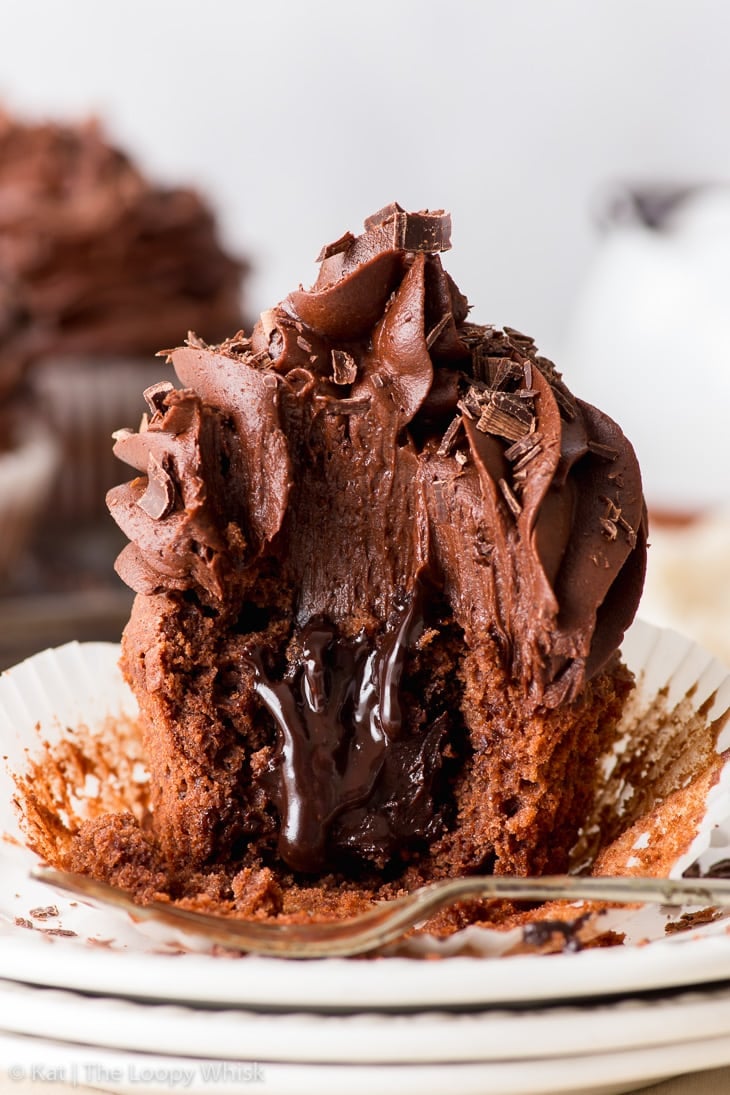 Also, these might actually be quadruple chocolate cupcakes, if you count the chocolate shavings… but that felt like false advertising, so triple it is. Don’t worry, we’ll get to quadruple too, eventually. And, dare I say it… quintuple?

The three chocolate elements of these chocolate cupcakes are each delicious and amazing on their own – but put them together, and magic happens. That is: chocolate magic, which is the best kind there is. 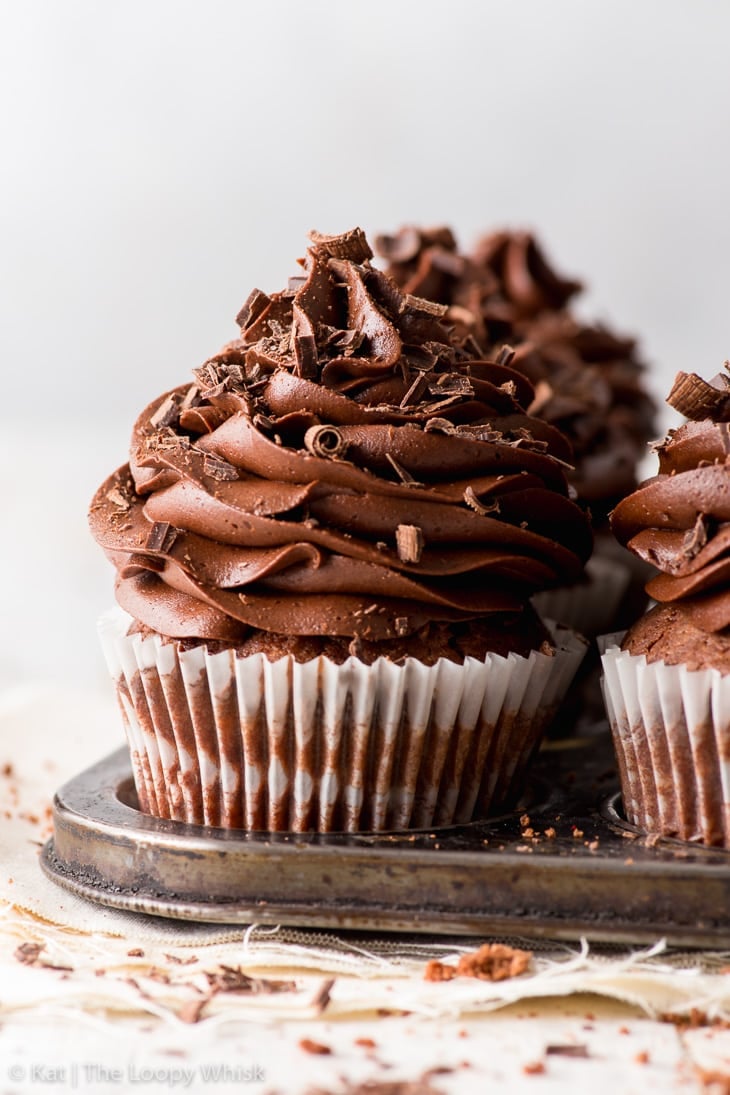 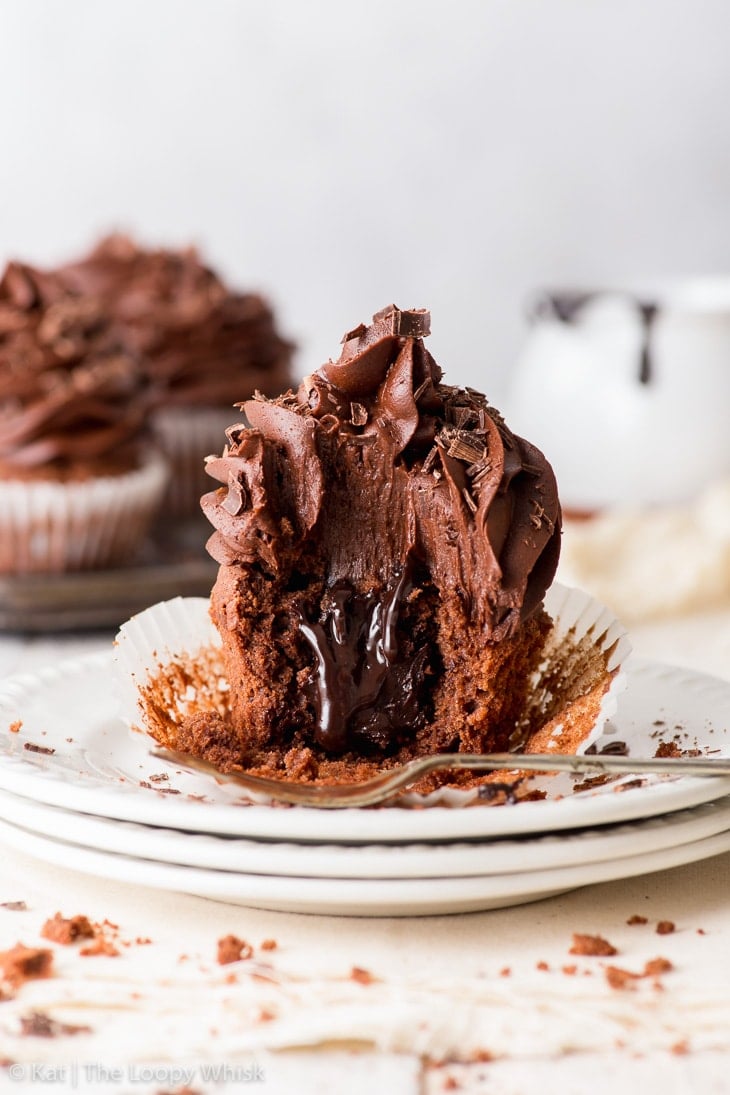 First, we have the moist, soft and mouth-watering chocolate cupcakes themselves, which just so happen to also be gluten free. (If you don’t have that particular dietary requirement, you can totally make these with normal wheat flour.)

Next up: the chocolate fudge sauce filling. This this deserves a crown and a sceptre… and probably its own holiday. It’s simply to die for and I could eat it by the spoonful. It has previously made an appearance in the triple chocolate pop tarts and the s’mores pop tarts – and it’s freaking amazing every single time.

Finally, the chocolate buttercream frosting. It’s luxurious, rich, smooth, velvety and all the other superlatives and drool-worthy adjectives you can think of. It’s my go-to chocolate frosting (I’ve used it before in my ultimate gluten free chocolate cake) and I will never ever ever not want to eat it. Seriously, you need to make it. 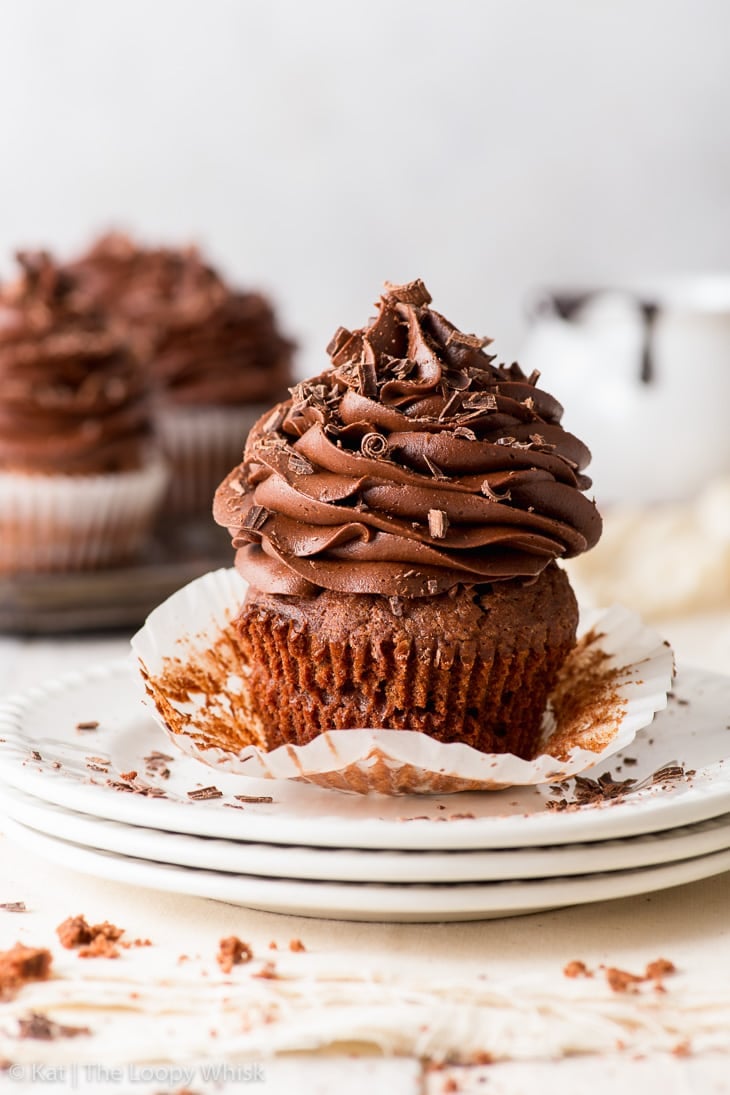 Aside for being almost too delicious for their own good, these triple chocolate cupcakes are also super easy to make. Which is, of course, always a good thing, especially if the results look THIS GOOD. 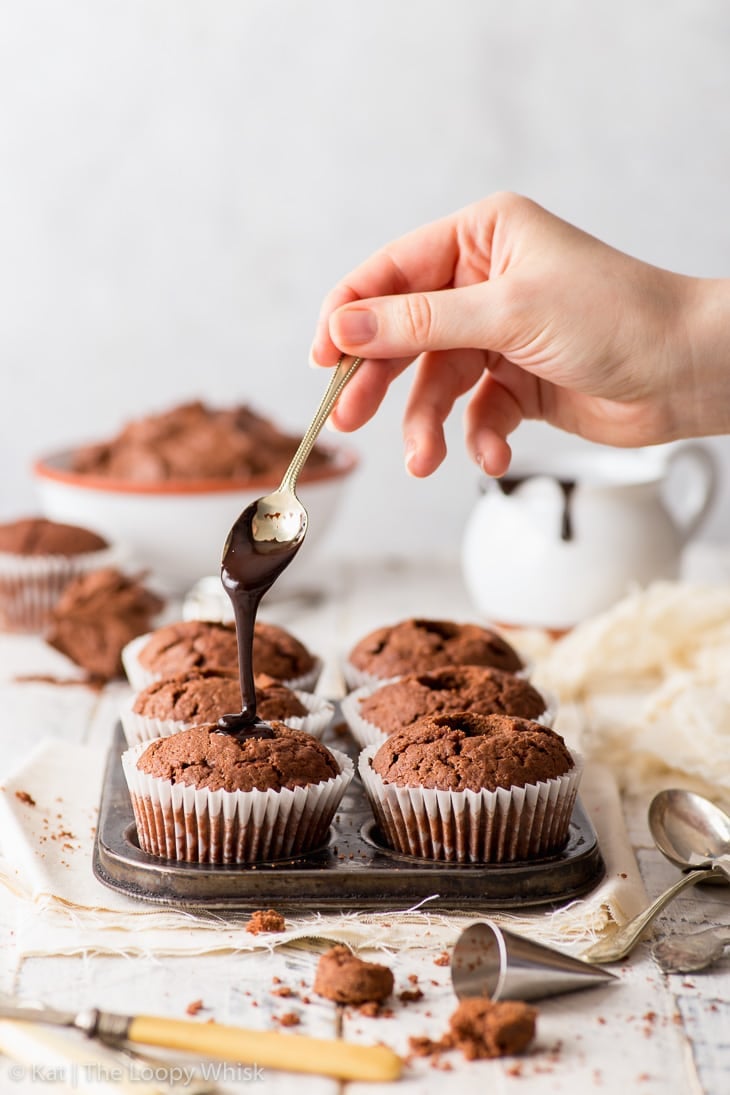 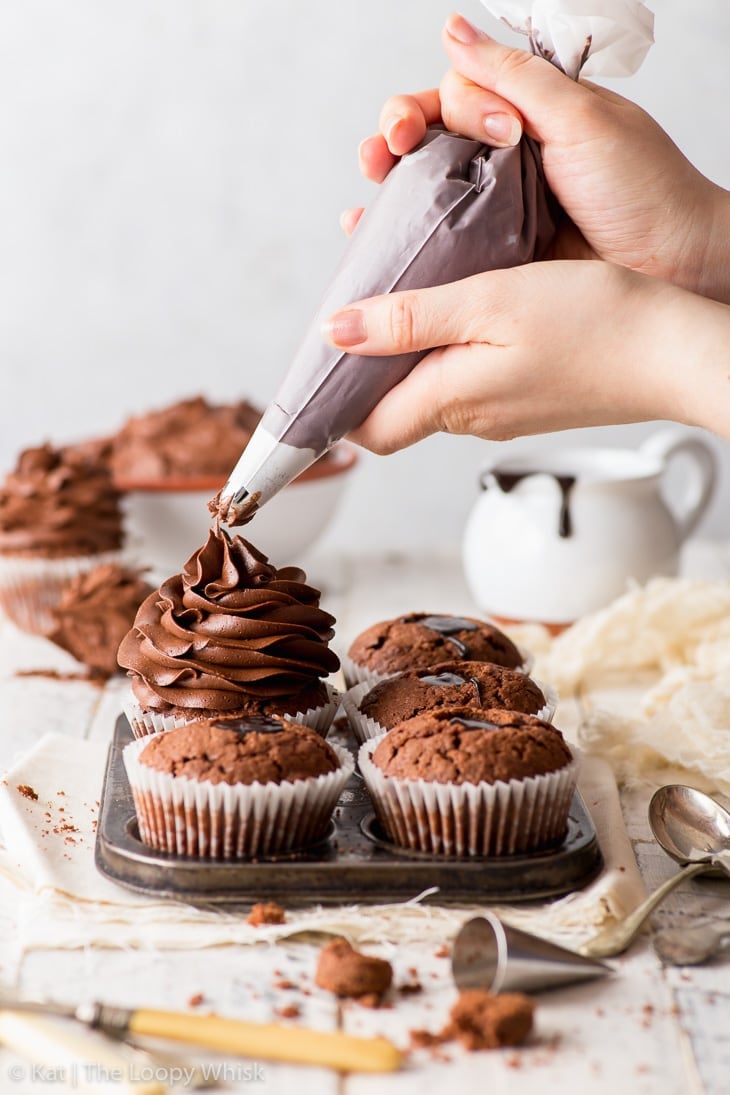 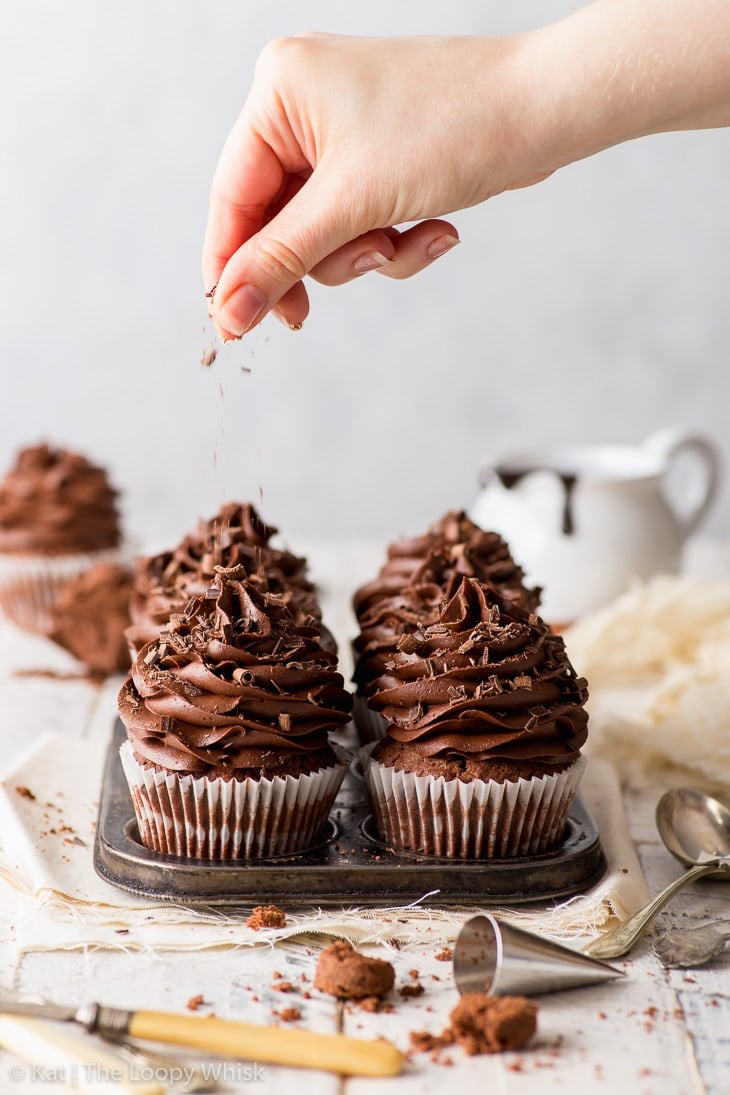 But anyway, I hope you make these wonderful triple chocolate cupcakes because they are just plain amazing, and such amazingness required to be shared, enjoyed and savoured. So get baking, friends! 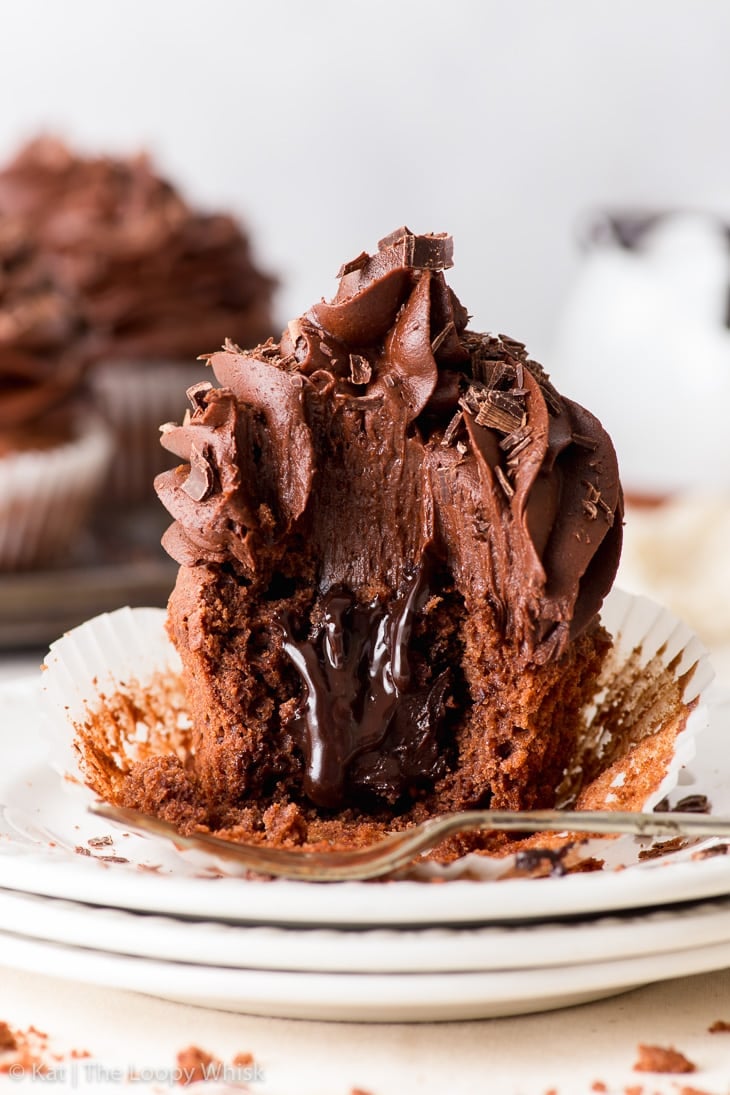 What are the ingredients for chocolate cupcakes?

The ingredients for these delicious chocolate cupcakes are simple, and I bet you already have all of them in your pantry already!

That’s it! I love this chocolate cupcake recipe because you get both the intense flavour of the melted chocolate and the deeper notes of the cocoa powder.

How long do you bake chocolate cupcakes?

These chocolate cupcakes are baked to perfection in a 355 ºF (180 ºC) oven after about 20 minutes. Because each oven is slightly different, I recommend doing the “toothpick test” to check when the cupcakes are done.

For the “toothpick test”, insert a toothpick (or skewer) into the cupcakes, and if it comes out clean after about 2 seconds, then the cupcakes are done!

How do you make chocolate cupcakes moist?

The important ingredient that keeps these cupcakes delicious and moist is the yogurt (or sour cream). Additionally, the slight tartness of the yogurt goes perfectly with the chocolate – you won’t be able to actually taste the yogurt or sour cream in the final cupcakes, but the chocolate flavour will be out of this world.

The melted chocolate also contributes to make the cupcakes moist and scrumptious. And as these cupcakes are gluten free, it’s important to add enough liquid (wet ingredients), as gluten free flours usually absorb more moisture as compared to wheat flour.

How do you make eggless chocolate cupcakes?

In general, I don’t recommend using egg substitutes such as chia of flax seeds in eggless bakes – in my experience (and I know this might be a controversial statement) they make the bakes slightly too gummy, giving them the appearance of being under-baked.

Instead, I recommend omitting the eggs, and adjusting the other ingredients accordingly – but not adding any substitutes. Eggs give moisture, elasticity and rise to your baking, so to counteract the loss of all three, we have to increase the quantity of wet ingredients (such as yogurt or milk) and increase the quantity of raising agents (and/or add an acidic ingredient, such as vinegar or lemon juice, which will make the raising agents “more active”).

How do you make chocolate buttercream frosting?

This is, hands down and no questions asked, my all-time favourite chocolate buttercream frosting. It has only 5 ingredients:

The resulting chocolate buttercream is intensely chocolatey, deliciously smooth and an absolute joy to pipe.

The Best Vegan Chocolate Brownies. Ever. 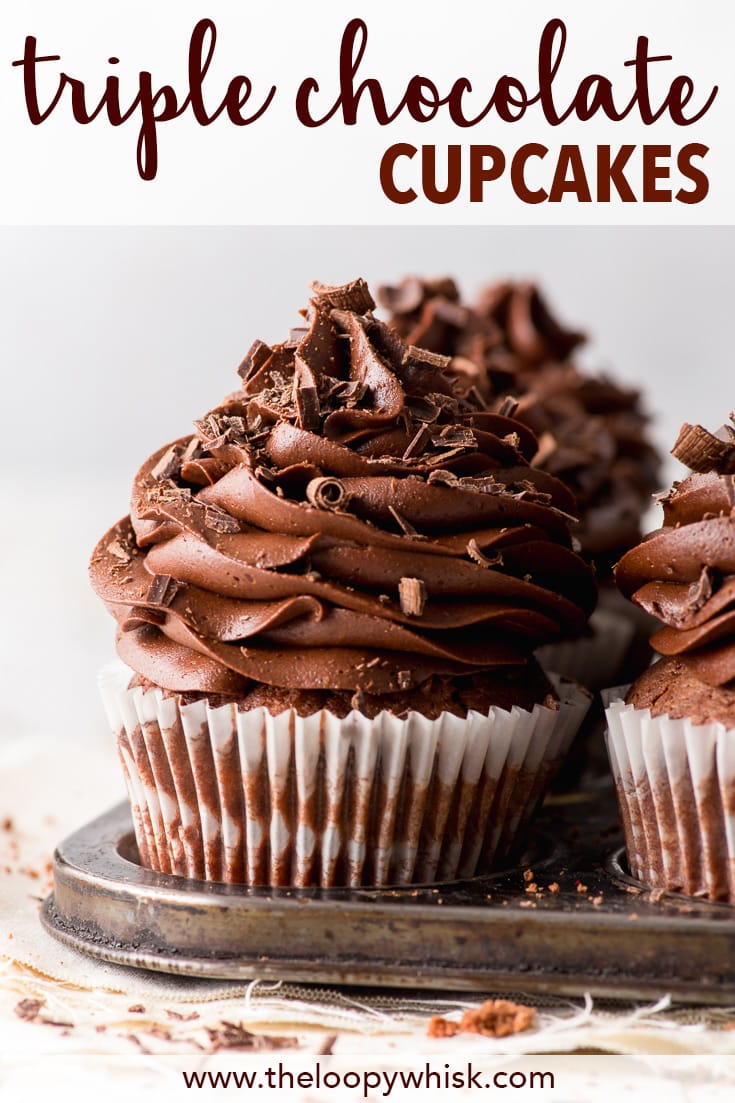 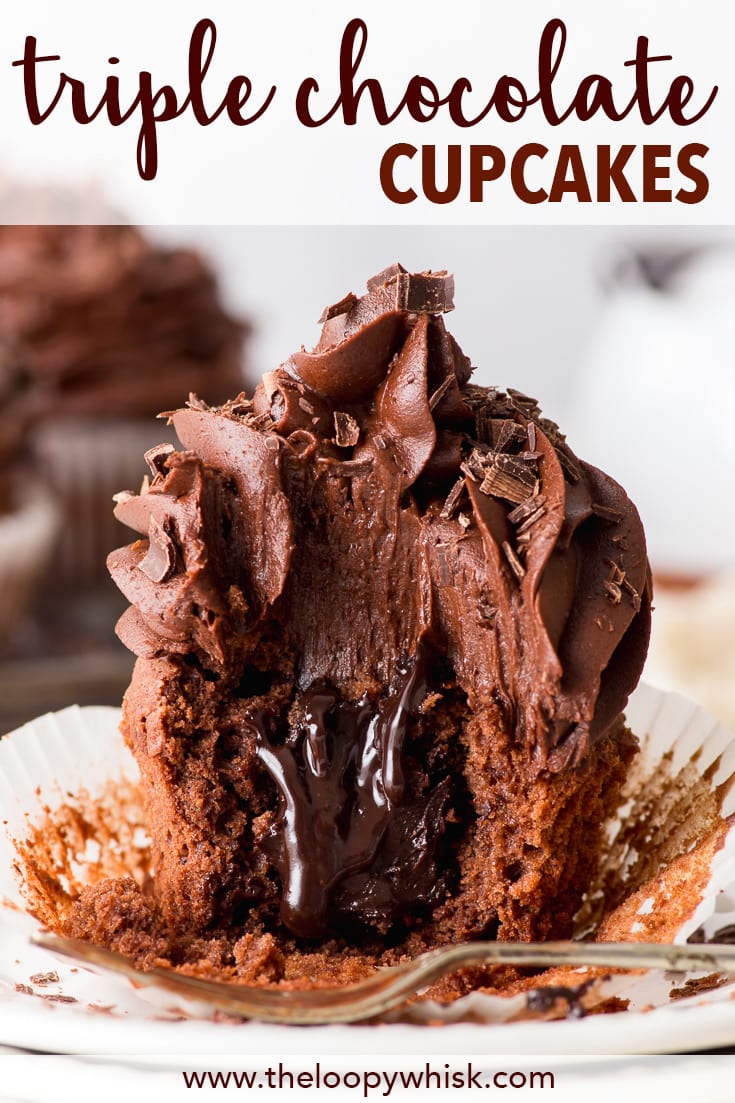