Skip to content
Order my GLUTEN-FREE cookbook!
About meCookbookContactWork with me
Home » S’mores Pop Tarts

How to take the humble pop tart to new heights: make s’mores pop tarts by stuffing them with chocolate and smothering them with marshmallow meringue frosting. Now doesn’t that sound heavenly? 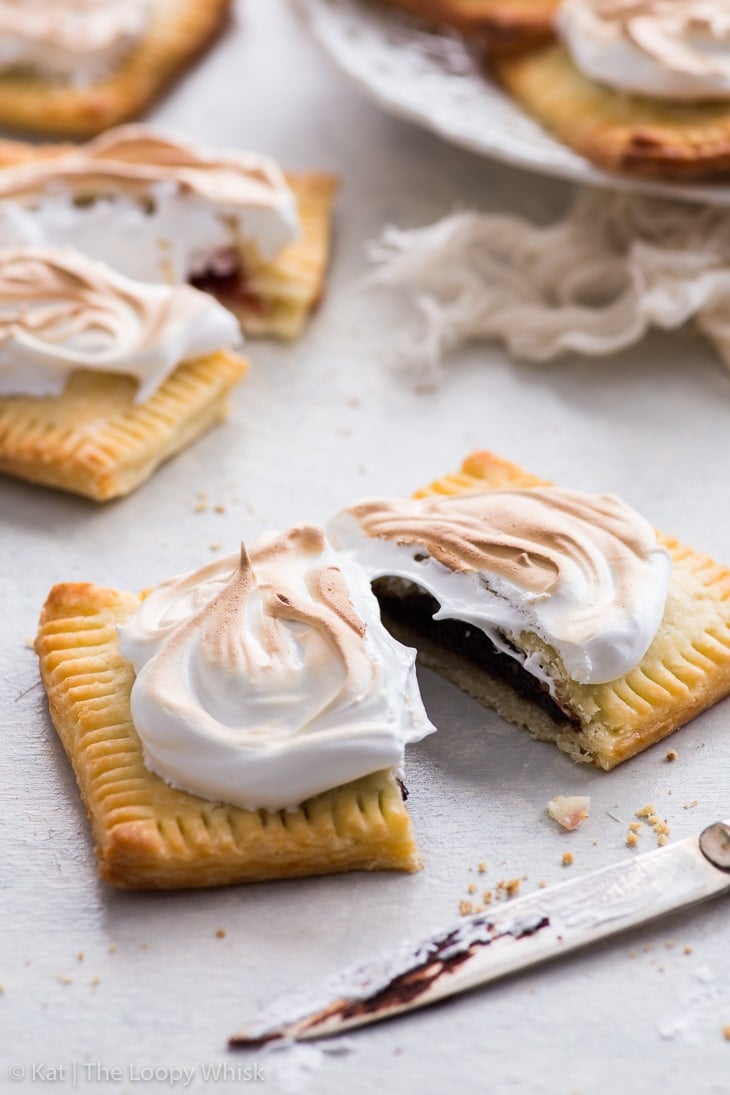 These pop tarts got me a marriage proposal. You think I’m joking… I’m not.

It was a very nice marriage proposal, complete with promises of cleaning, doing laundry, snuggles and microwaving meals. In exchange for pop tarts. Obviously.

(Before you start throwing confetti: nope, I’m not married. Still happily single. Regardless, getting a marriage proposal on the basis of pop tarts was a lovely thing – if a bit bizarre. It’s still making me snort-laugh even now, a week later.) 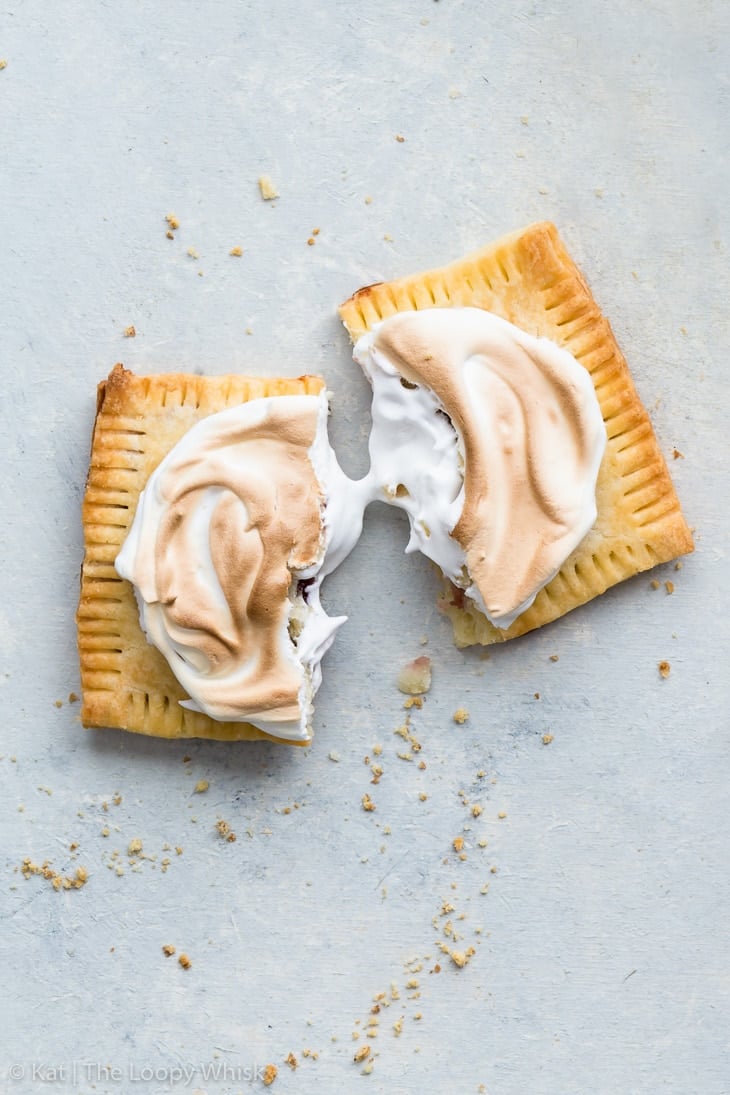 You don’t need me to tell you that these s’mores pop tarts are amazing, do you? They’re S’MORES POP TARTS. That should pretty much tell you everything you need to know.

And even though they look like the cutest, most mouthwatering little bites of indulgence… they’re easy to make.

Come on, I’ll show you. We’ll go step by step, because everyone should learn how to make them. 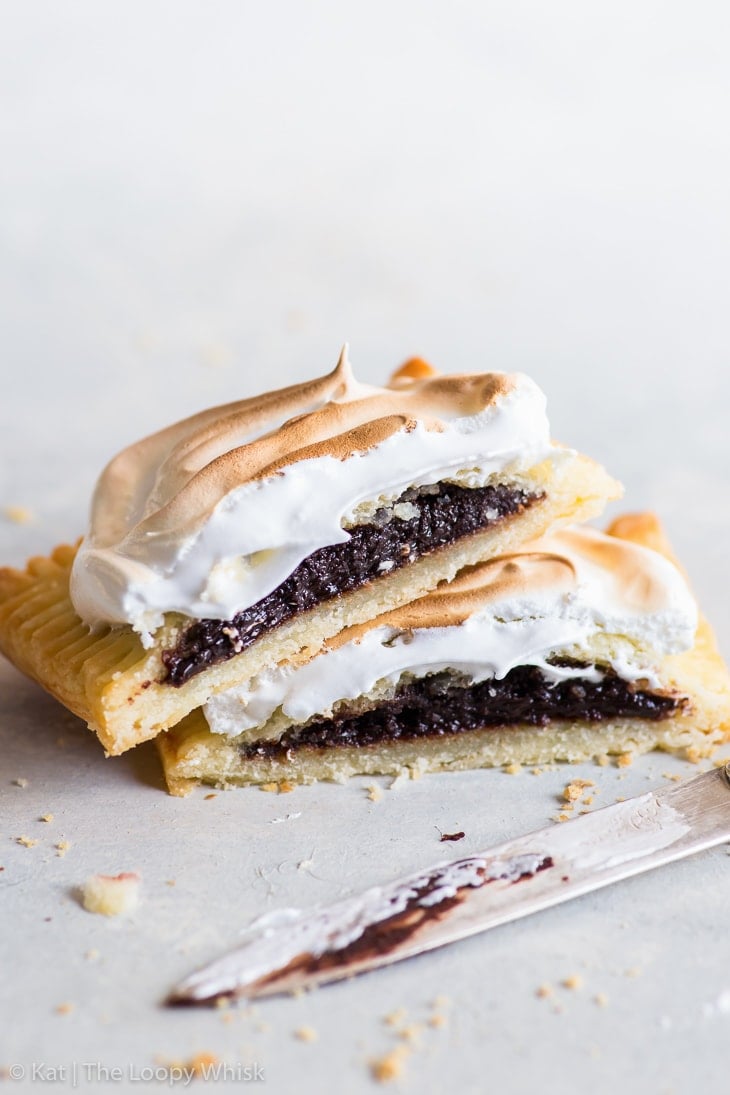 Before we get to the bits and bobs of making these gorgeous pop tarts – if you like what you’re seeing, subscribe to my newsletter to keep up to date on the latest recipes and tips!

HOW TO MAKE THE CHOCOLATE FUDGE FILLING

First, let’s get everything ready. Measure the ingredients, get the pans and whisks ready, turn up the music. Get comfy. This is an exercise in beauty and decadence.

The ingredients are simple – and pack a flavour punch. Just as we like them. 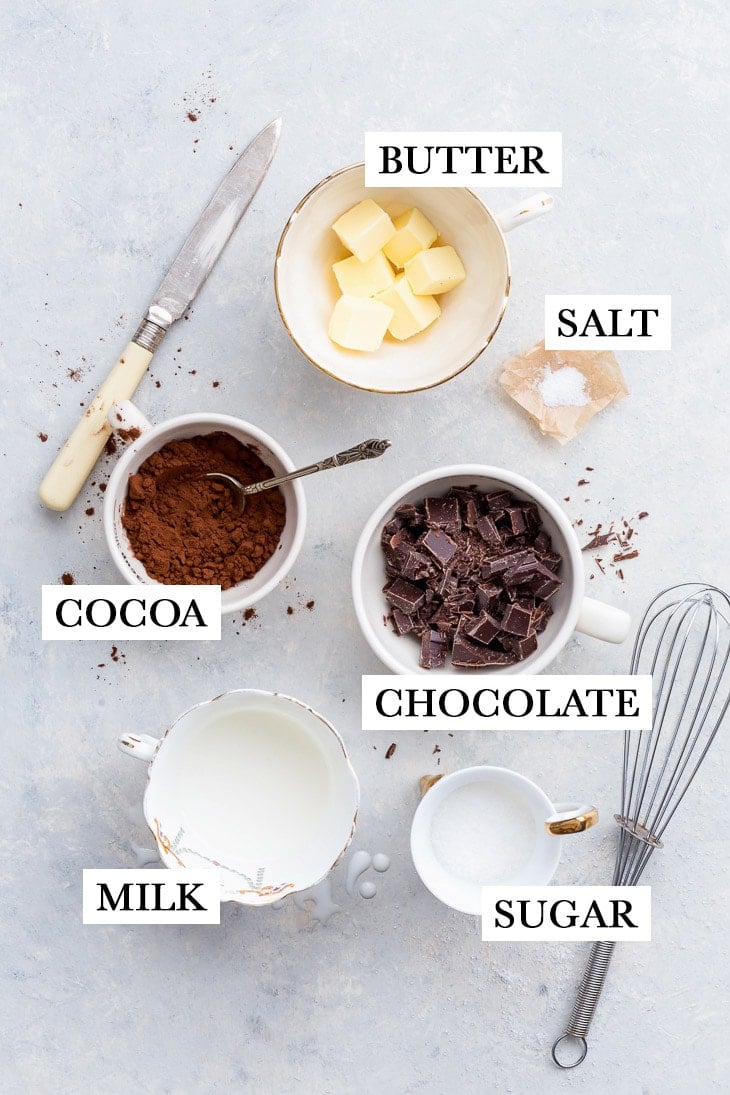 Mix the cocoa powder, sugar, a pinch of salt, milk, and half the chopped chocolate. Gently heat it until everything has melted and combined to form a luscious glossy gloop.

Remove from the heat. Have a taste. It’s heavenly… and about to get better. 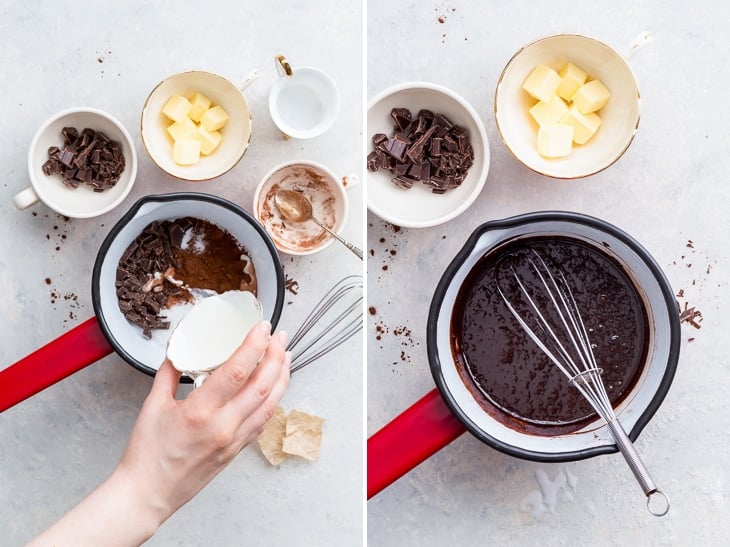 Add in the butter and the rest of the chopped chocolate. Let the remaining heat do it’s thing, then stir everything together until it’s dissolved and lovely.

Have another taste. And another. Sigh blissfully, then set it aside and try to forget about it until needed. (I’m asking for the impossible here, aren’t I?)

The chocolate fudge filling will firm up slightly as it cools down, which means we’ll be able to stuff even more of it into each pop tart. I know, isn’t it great? 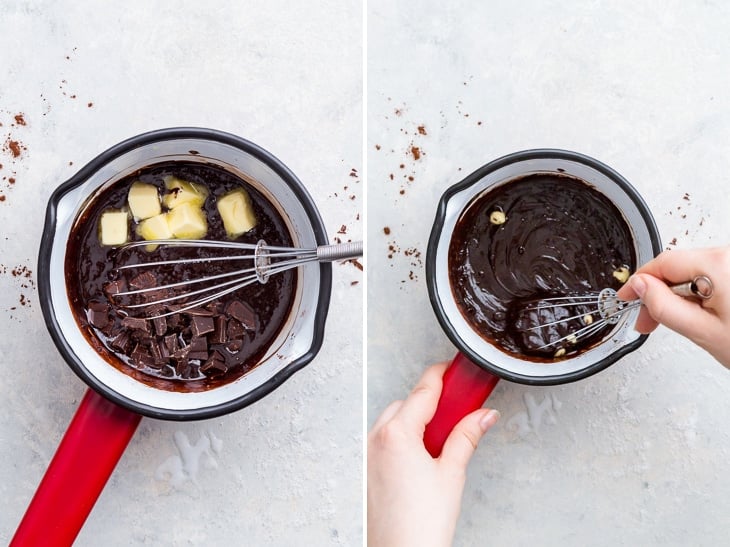 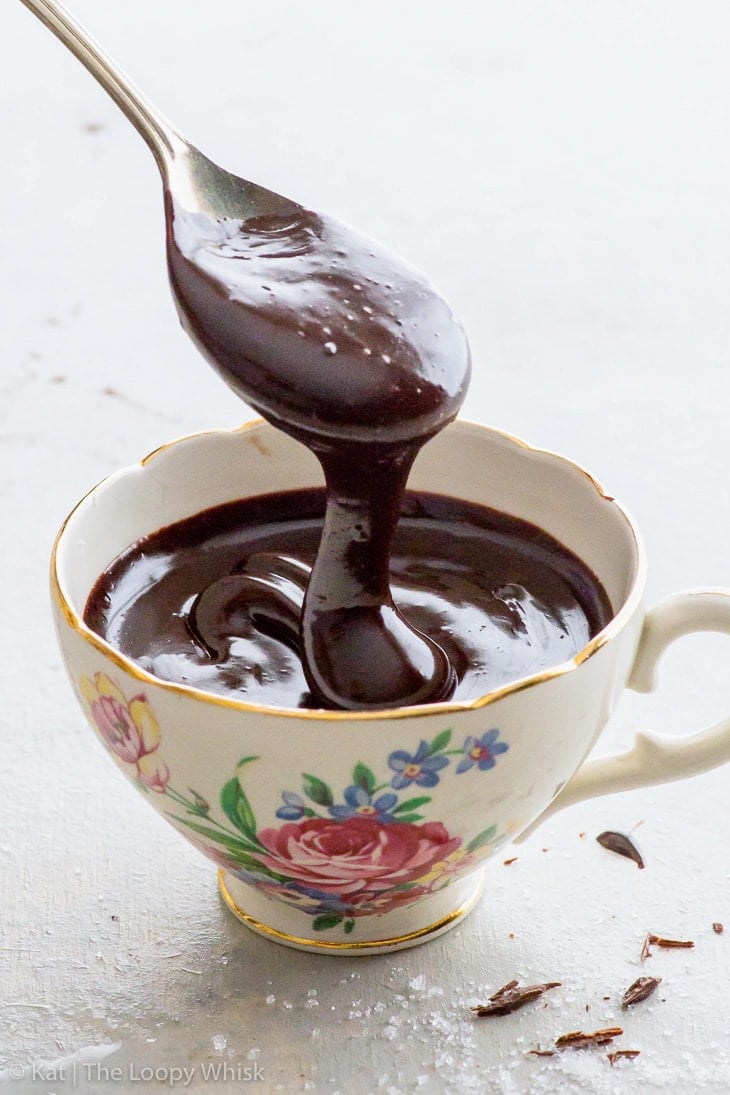 The filling is cooling, and let’s say that the pie dough has been chilling in the fridge. Mmkay? We’re pros at making gluten free pie dough by now. It’s the same dough I’ve used in the gluten free apple pie, blackberry pie and caramel apple hand pies.

First, roll out the pie dough until roughly 3 mm thick and cut out 3 x 4 inch rectangles. It’s not a precise science. Just make sure that eventually, you’ll have (approximately) matching pairs of rectangles.

Then place half of the rectangles on a lined baking sheet and brush the edges with egg wash. This will help seal the top and bottom pie dough pieces together and prevent (too much) leakage from occurring. 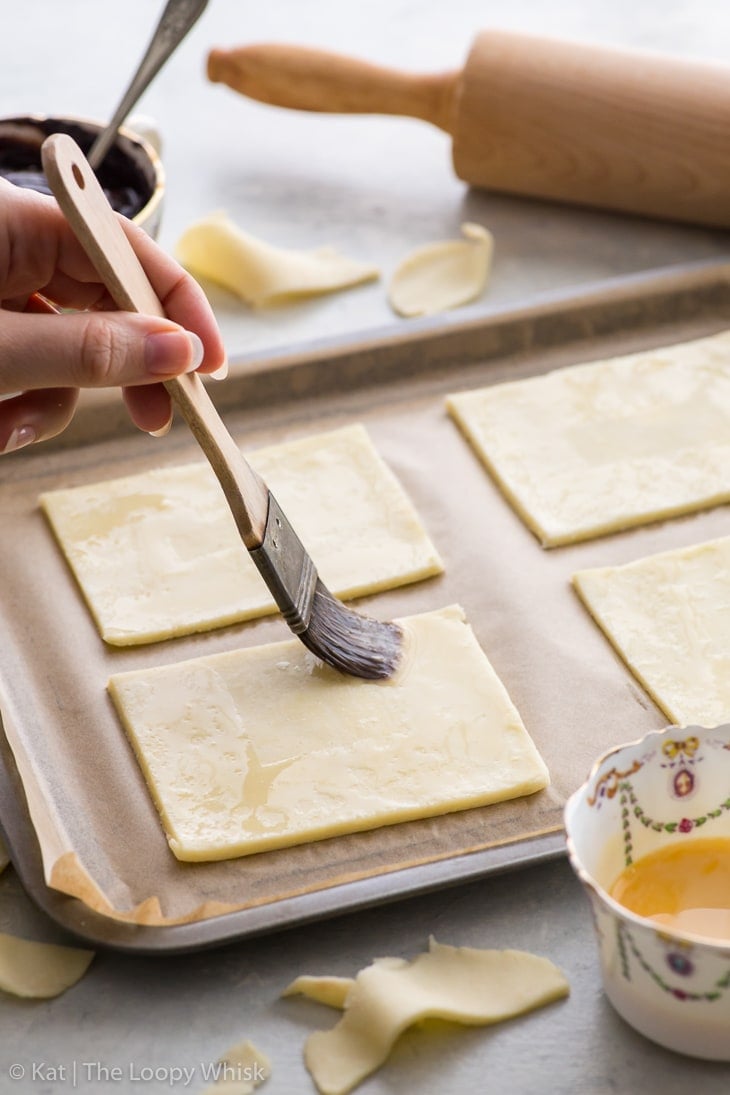 Spoon a good dollop of the delicious chocolate fudge filling into the centre of each rectangle.

If it looks like it’s almost too much for a pop tart to handle… then it’s the exactly right amount. Be brave. 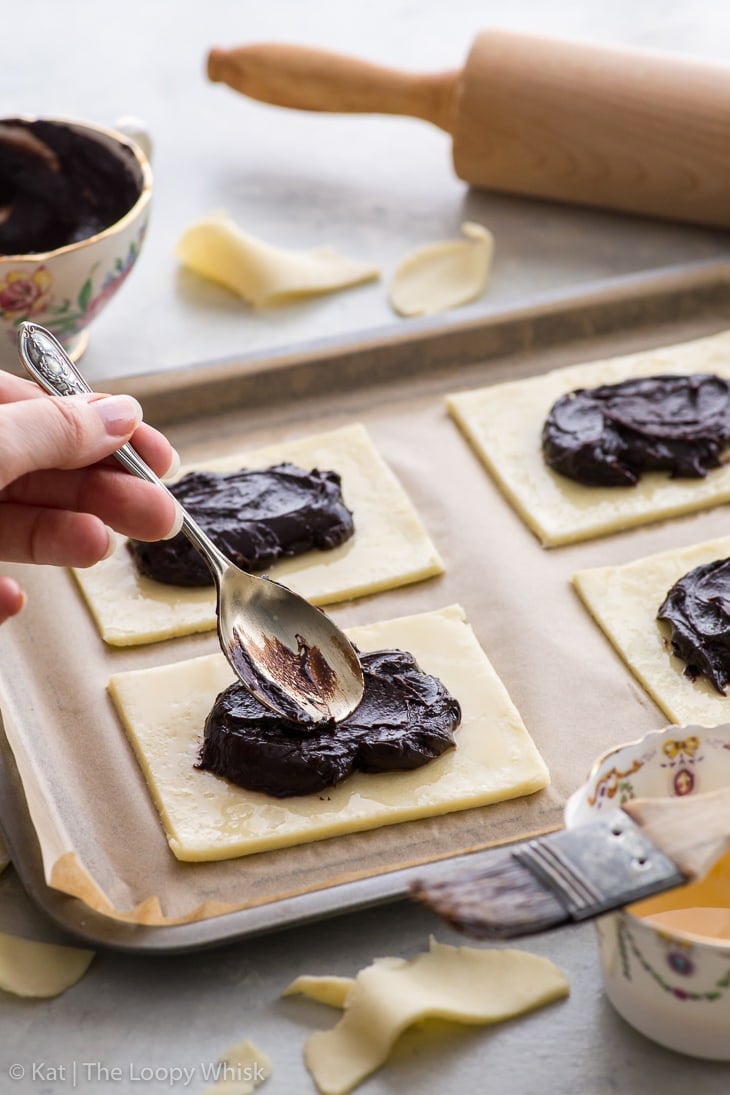 Let’s take a small detour to what will eventually become the pop tart tops. Prick the centre of each rectangle with a fork or toothpick.

This will allow any steam generated during baking to escape, and prevent cracking and leakage. 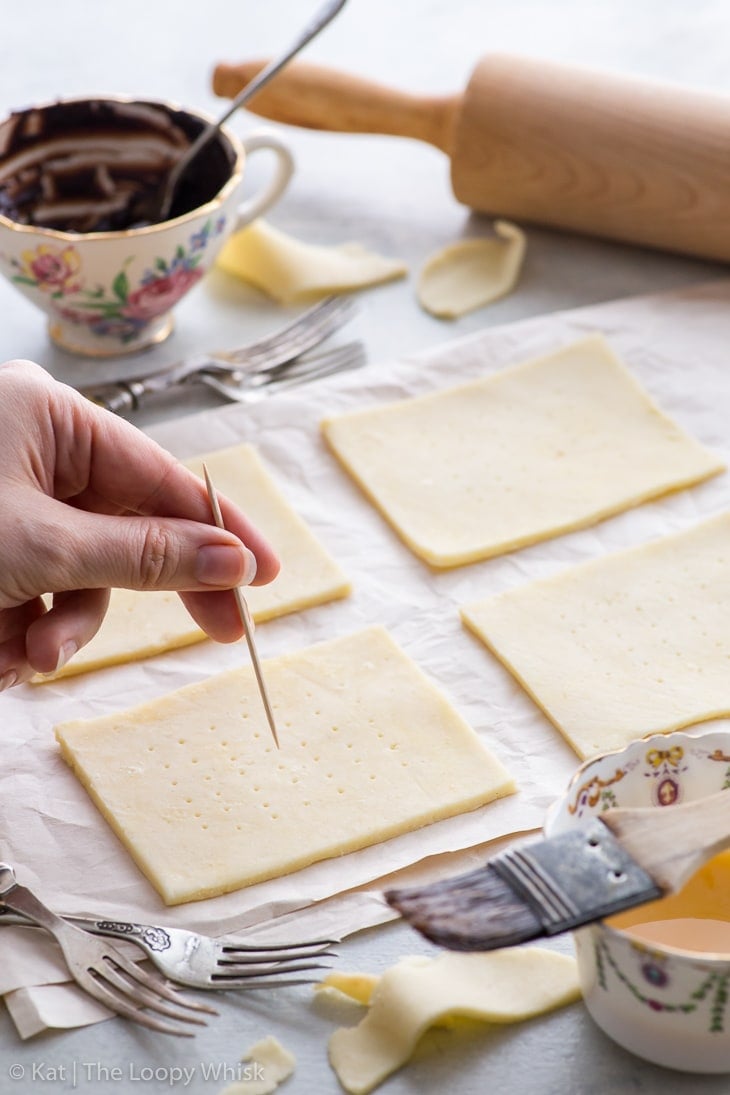 Cover the filling with the pricked rectangles. Careful now. Gently press along the edges with your fingers to make a strong seal. Don’t let any of that glorious filling escape. 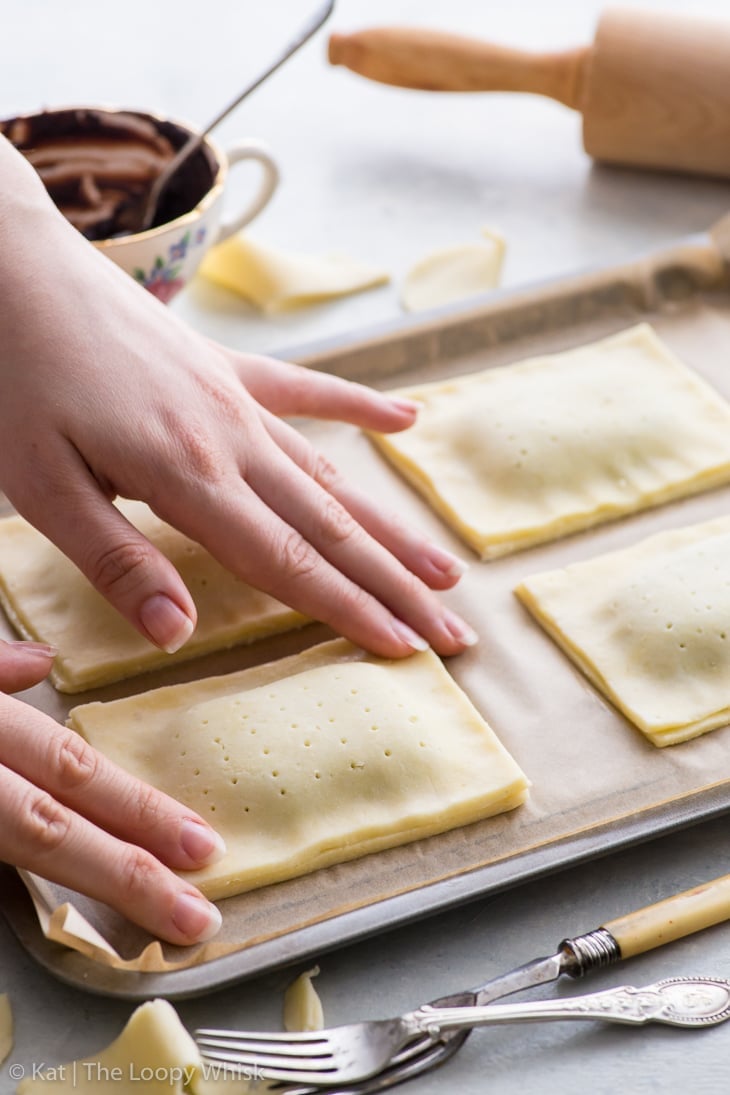 Finally, make the edges pretty with a fork.

The fact that this additionally seals the edges and will help prevent the dreaded filling leakage is immaterial. It’s prettay. 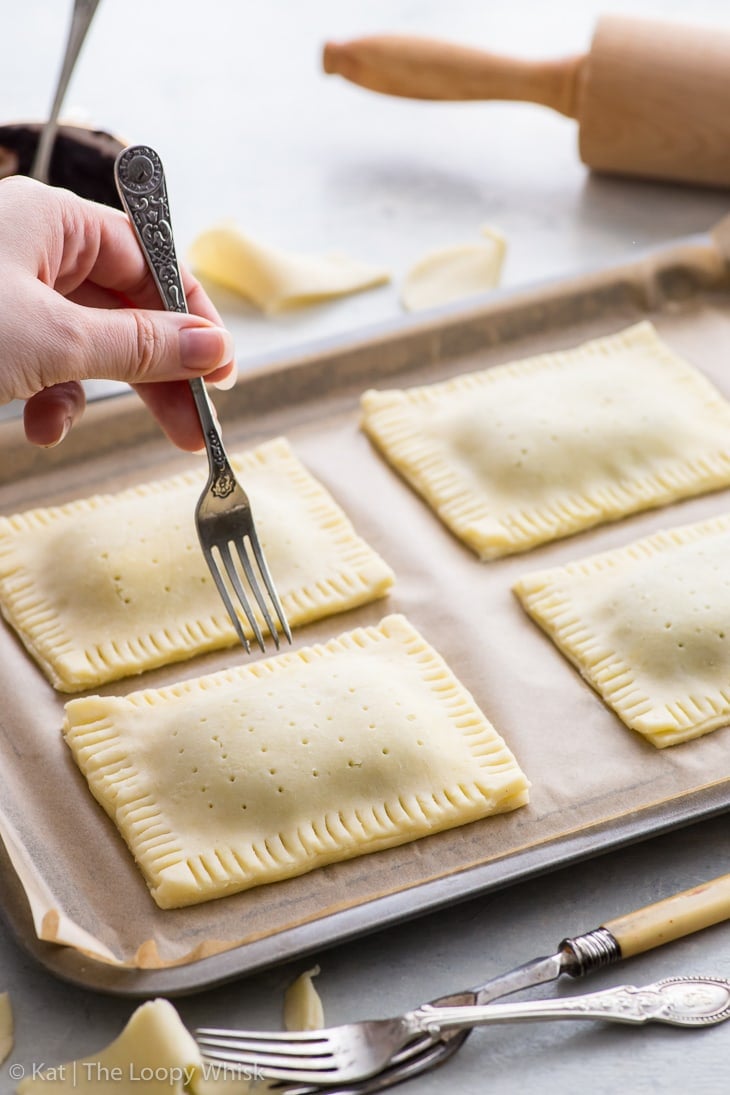 Bake. The pop tarts will puff up slightly in the oven and become flaky pieces of golden brown perfection. The kitchen will smell like chocolate and pie.

Find your favourite song and do a happy dance. We’ve got something good going on here.

Sure, we could just plop a few store-bought marshmallows on top of the pop tarts, toast them and call it a day. But we’ve gone to the effort of making the gluten free pie dough and the chocolate fudge filling and prettifying the pop tarts.

Don’t stumble at the last hurdle.

This fluffy, sweet cloud of marshmallow meringue is what makes these s’mores pop tarts so darn special. That extra bit of effort, the pinch of magic dust.

It’s just good ol’ swiss meringue, gently swirled on top of each pop tart and then carefully toasted (artfully charred?) either with a kitchen torch or under the grill. 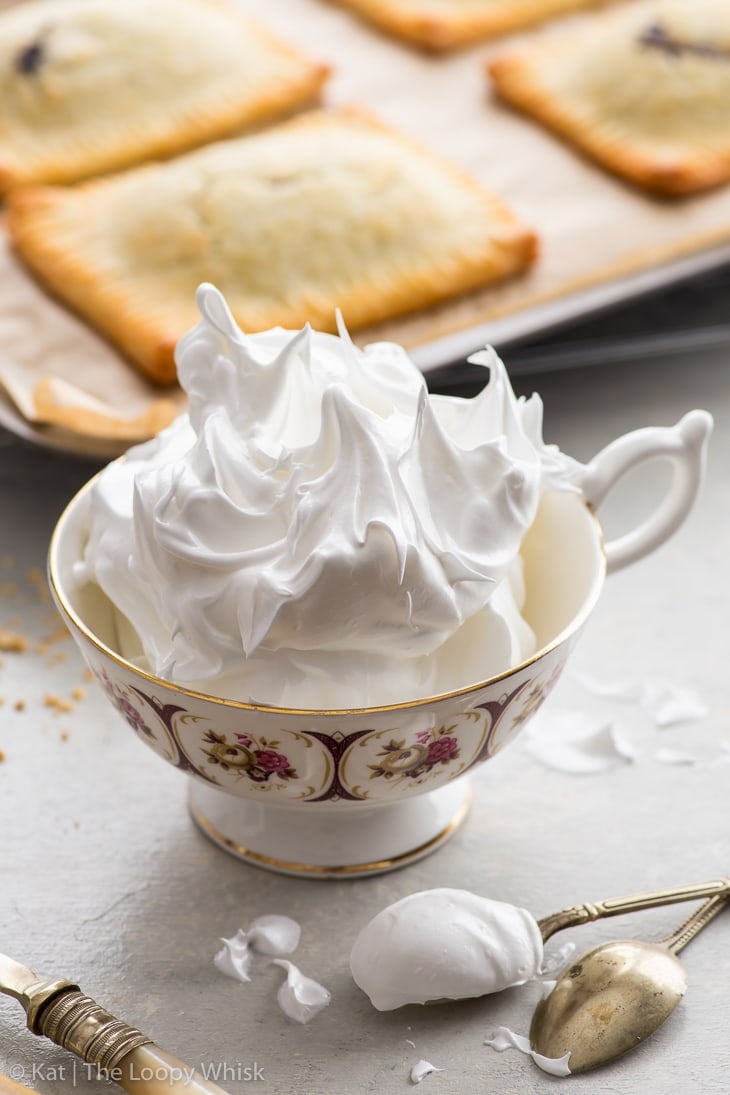 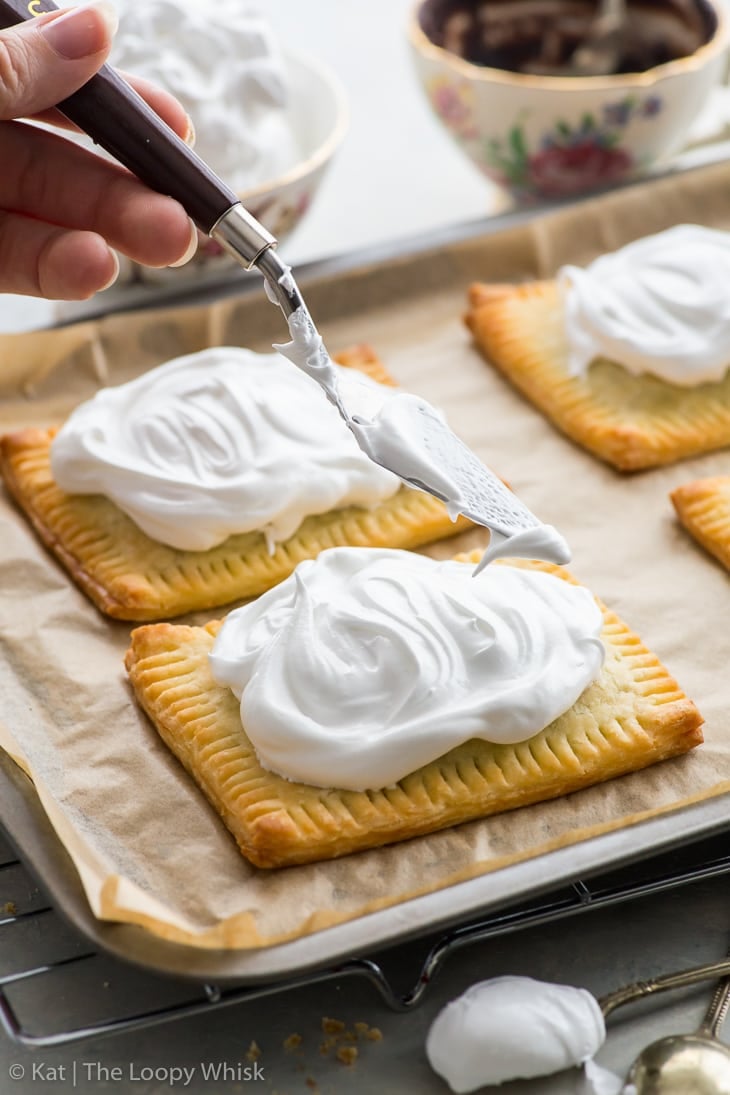 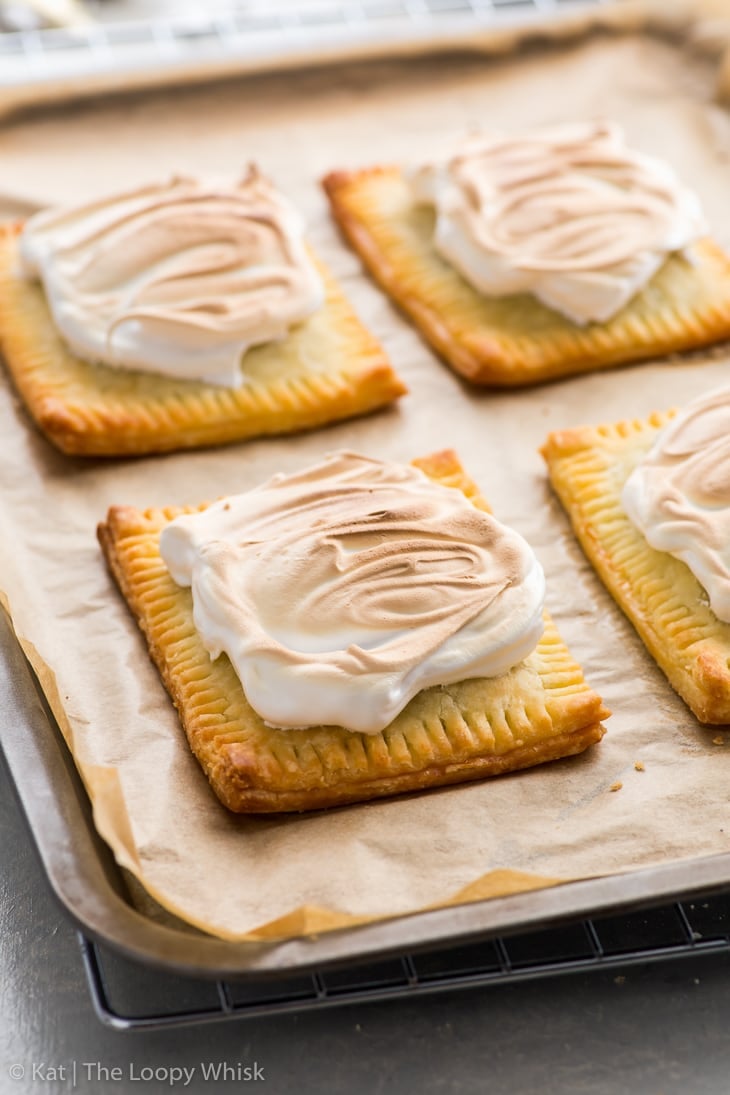 And just like that, what used to be simple chocolate filled pop tarts become S’MORES POP TARTS.

It’s magic. Meringue magic. (The best there is.) 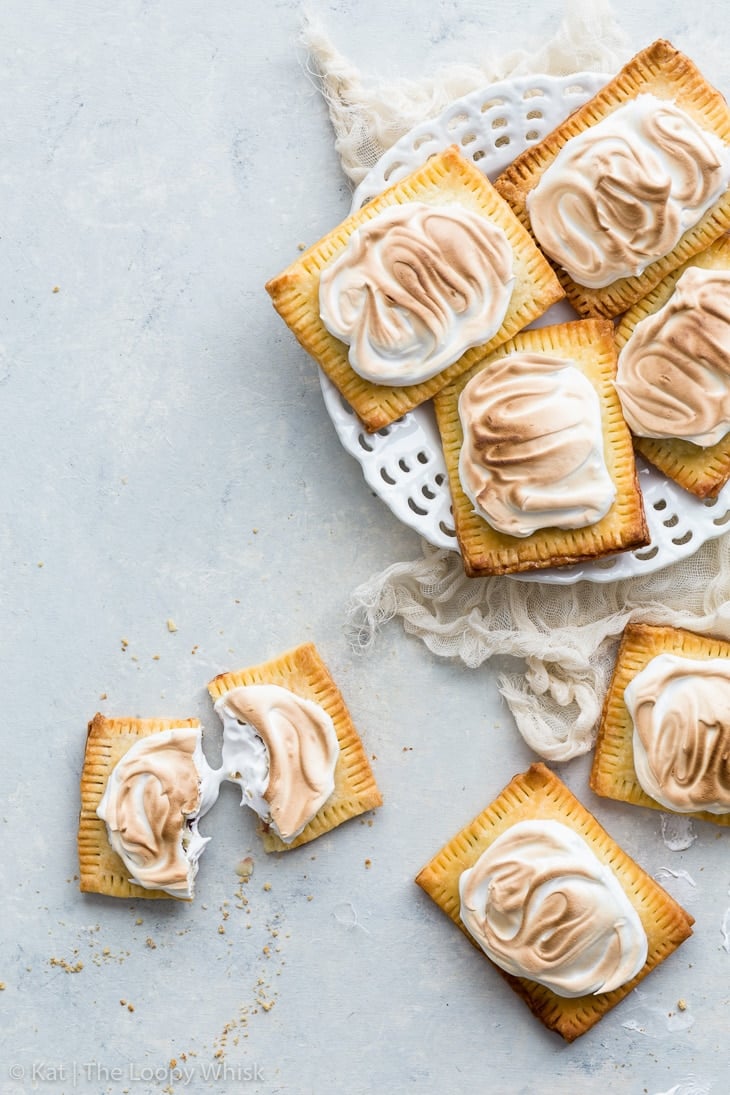 Then, when you take a still slightly warm pop tart… and the marshmallow frosting is fluffy and sticky in that perfectly naughty way. And the pie crust is buttery and crisp round the edges. And the chocolate filling is gooey and the flavours combine and there are fireworks going off in your taste buds.

There you have it, friends. S’mores pop tarts that take a humble pop tart to a whole new level – and elicit marriage proposals. So next time you’re trying to prefect your Tinder profile (or whatever’s the latest online dating thing) – pop tarts. Pop tarts are the answer. And you know what… I kinda get it. 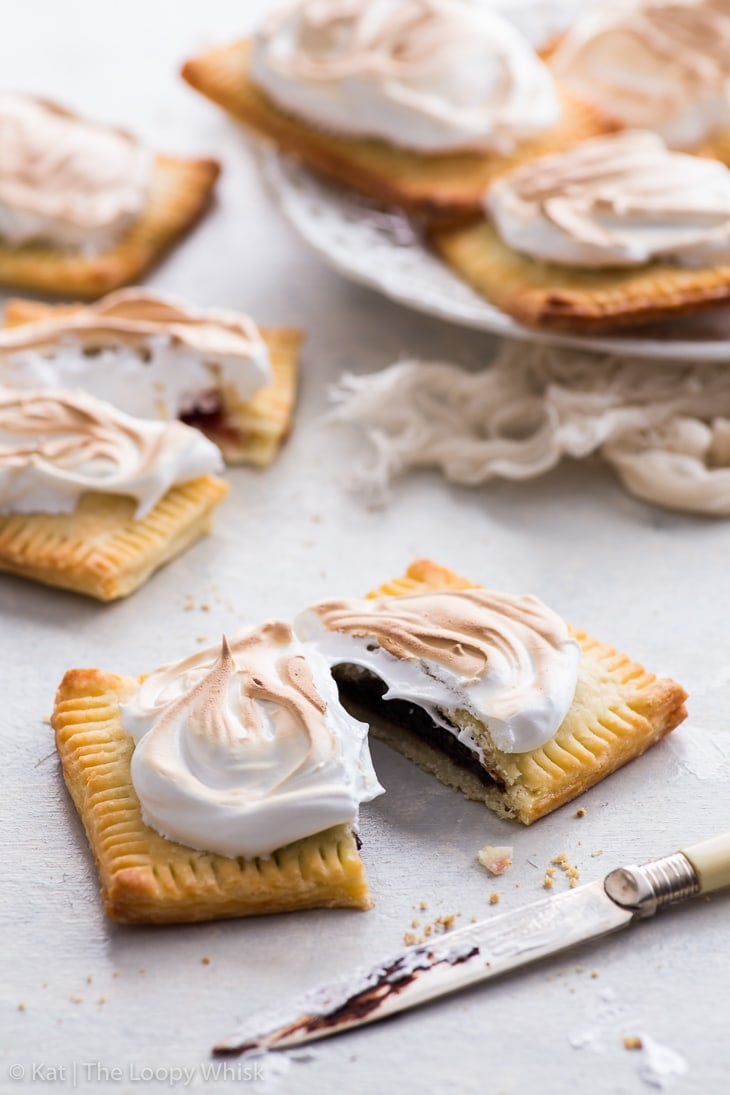 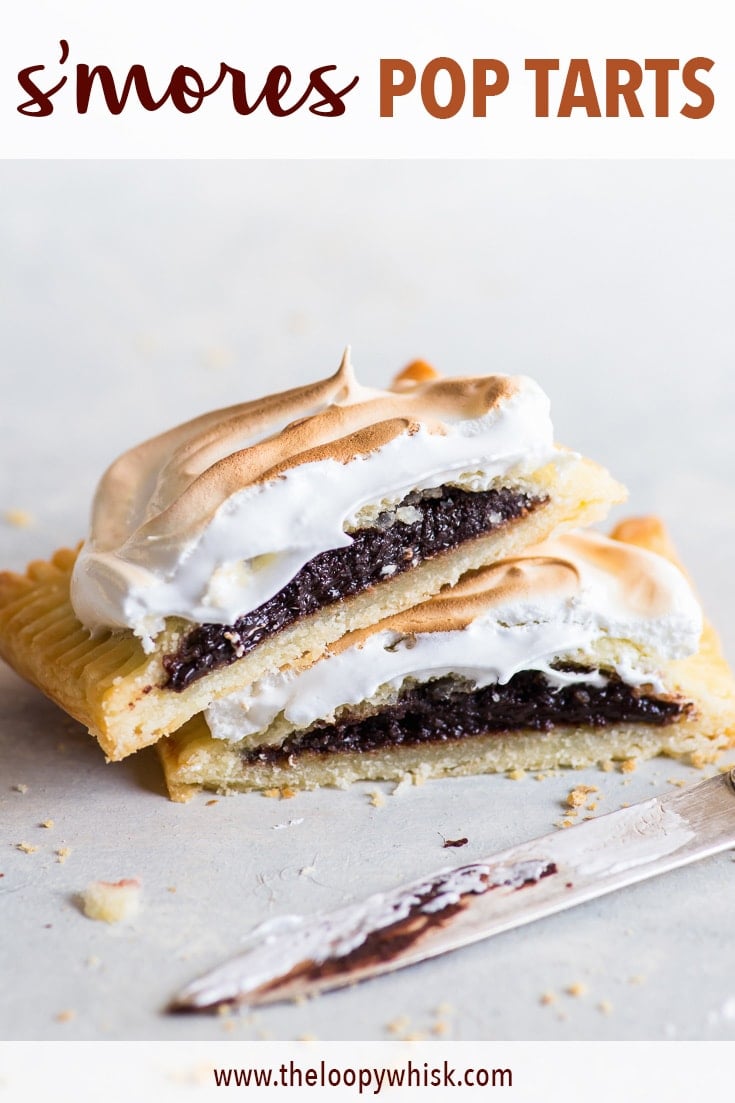