Skip to content
Order my GLUTEN-FREE cookbook!
About meCookbookContactWork with me
Home » The Best Vegan Cinnamon Rolls You’ll Ever Eat

The fluffiest, softest, most decadent vegan cinnamon rolls you’ll ever taste. With only 8 ingredients, this recipe couldn’t be simpler – and it’s entirely plant based! Vegan comfort food at its best. 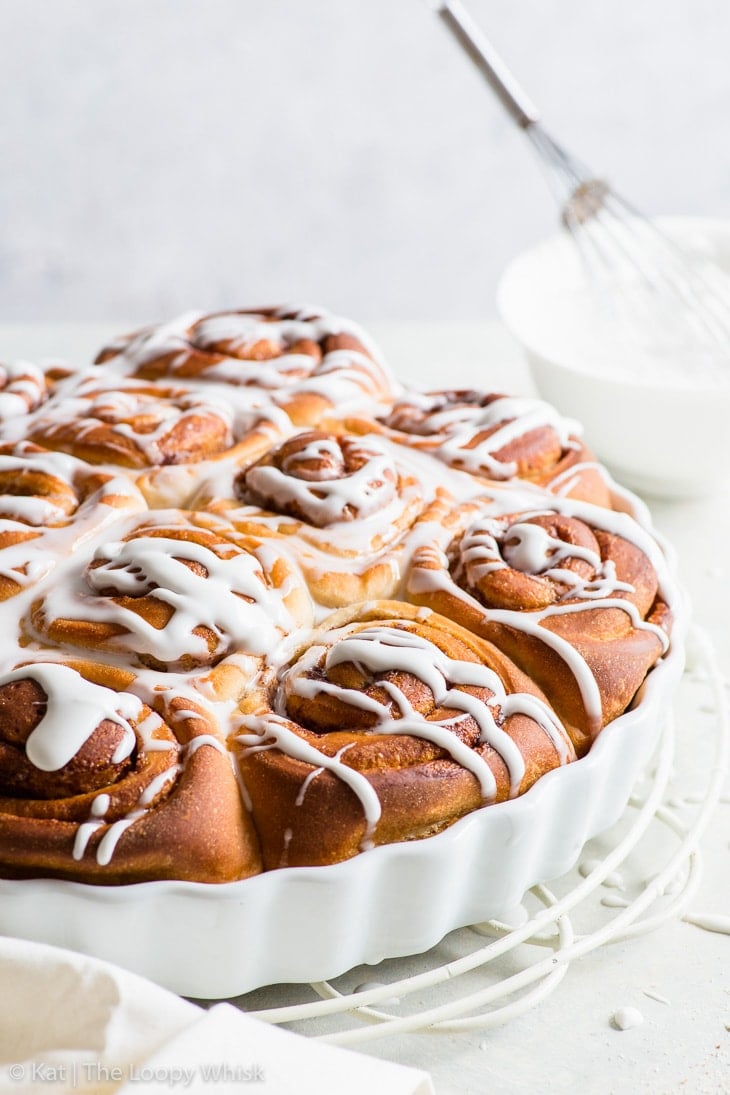 Let’s make vegan cinnamon rolls. How difficult can it be? (Spoiler alert: not at all.)

Sure, there’s eggs and butter and milk in the “usual” cinnamon roll dough, and a whole lot of cream cheese in the frosting… but are these really crucial to capture the essence of a good cinnamon roll?

You see, this is how I develop vegan (or gluten-free or whatever-free) recipes. I search for the very best recipes online, and then strip them down to their bare bones. I look at every ingredient and decide its role and importance.

There’s no point starting from scratch. Why would I try to completely re-invent cinnamon rolls, when other people have spent years and decades perfecting the recipe? My aim is to give you a VEGAN cinnamon roll recipe that tastes just as good as the “original”. To do that, I first need to find the best original.

The best original is usually an average of many very good recipes. (I’m a scientist at heart, so taking averages and comparing variables and pondering trends is kinda my thing.)

And then, the fun begins. 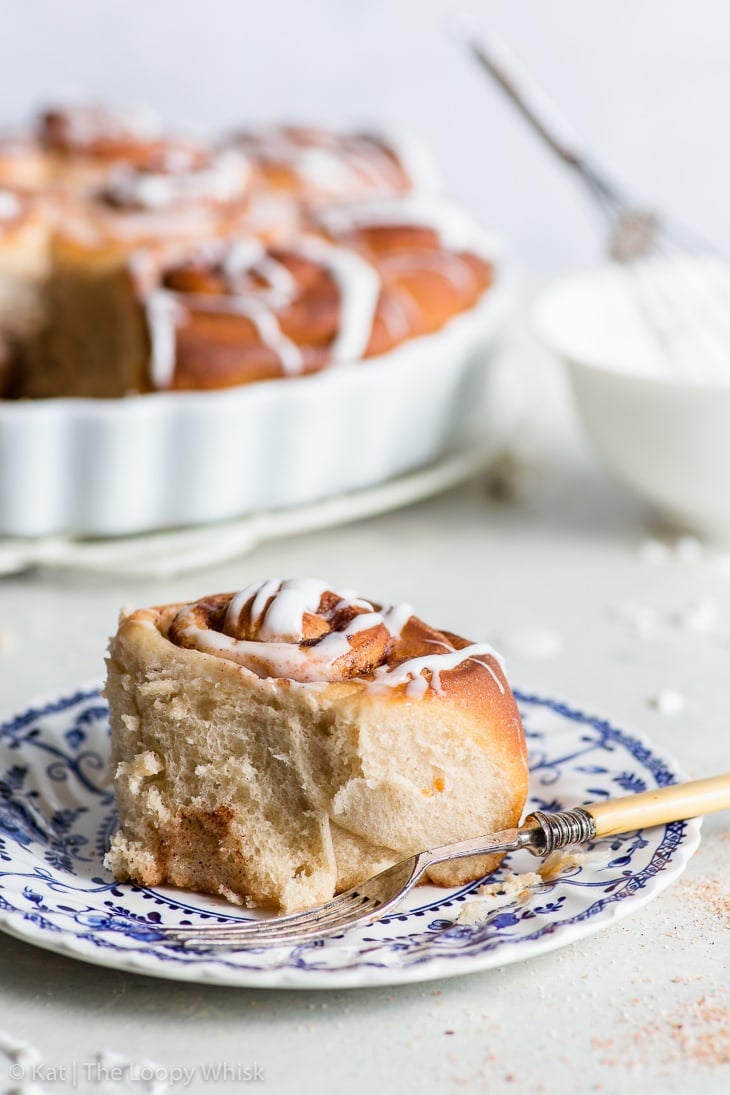 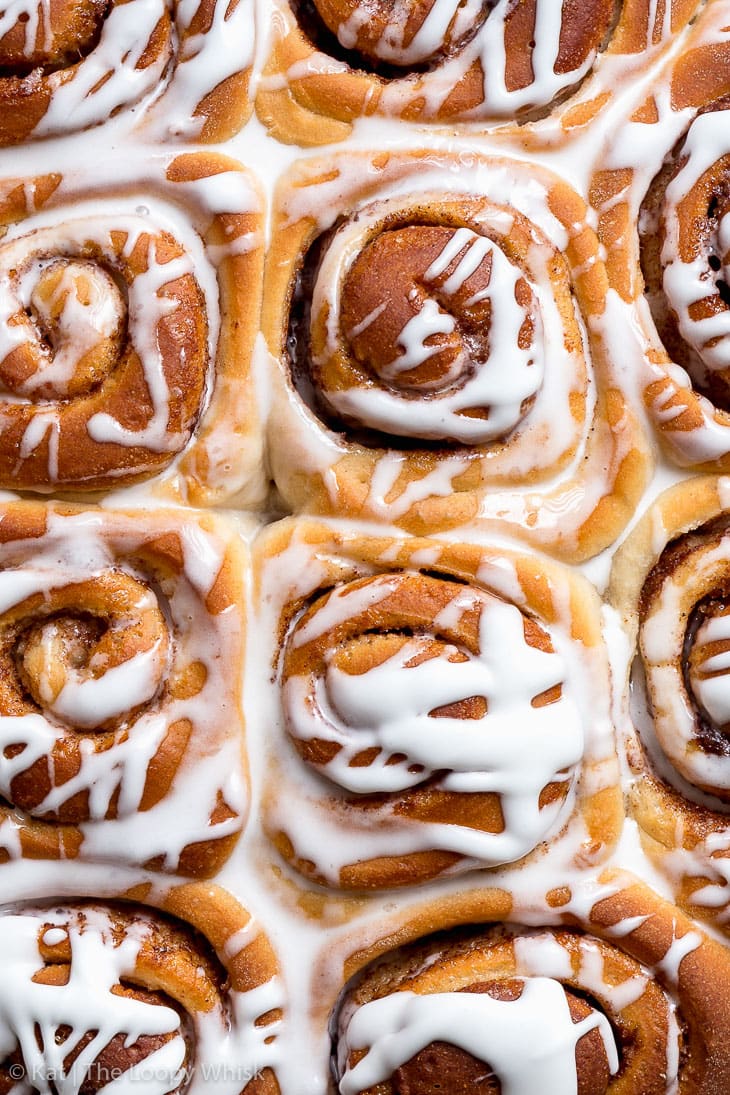 To answer my own question: no, eggs and butter and milk aren’t 100% necessary for delicious cinnamon rolls. Their main purpose is to provide the liquid element in the dough, as well as give the cinnamon rolls their richness.

For this vegan cinnamon rolls recipe, we’ll achieve the same results with almond milk (as the main liquid element) and coconut cream (to make the rolls extra soft and decadent and almost buttery).

The filling usually requires butter to stick the sugar and cinnamon to the dough… but coconut cream will do the job just as well.

As for the frosting… we mainly need to replace the cream cheese (although some recipes also use butter and cream). Again, easy. We’ll go with the… you guessed it: coconut cream! Why complicate when it can be oh-so simple?

The end result, though? Spectacular. 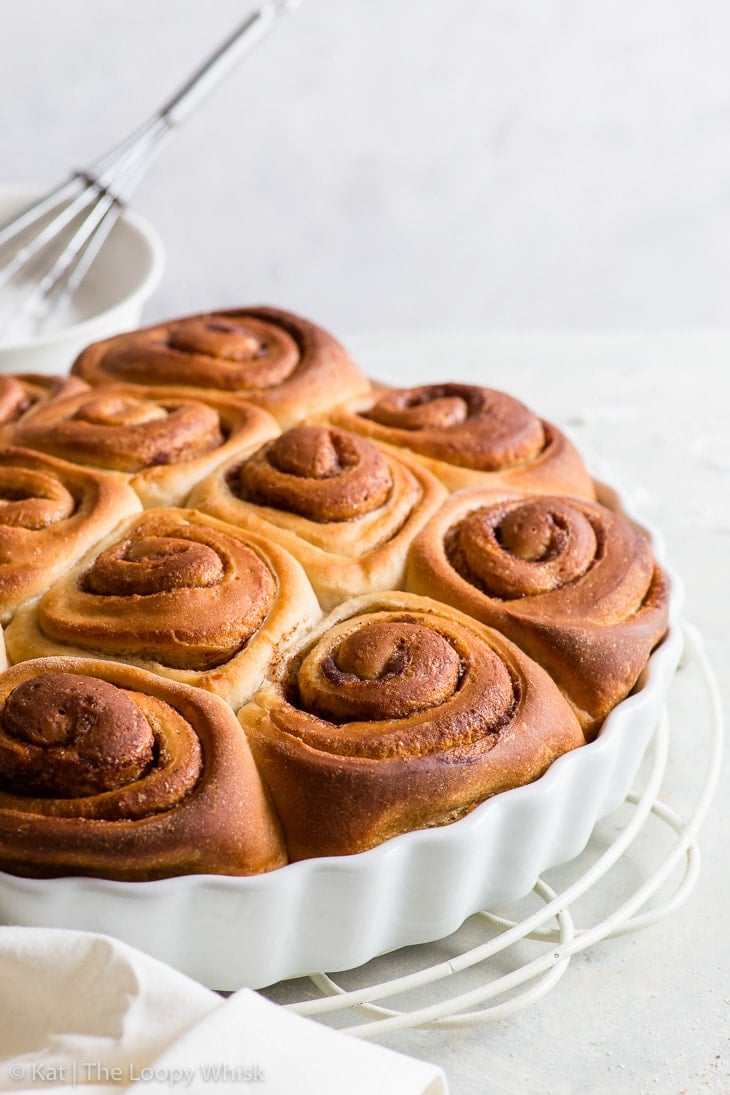 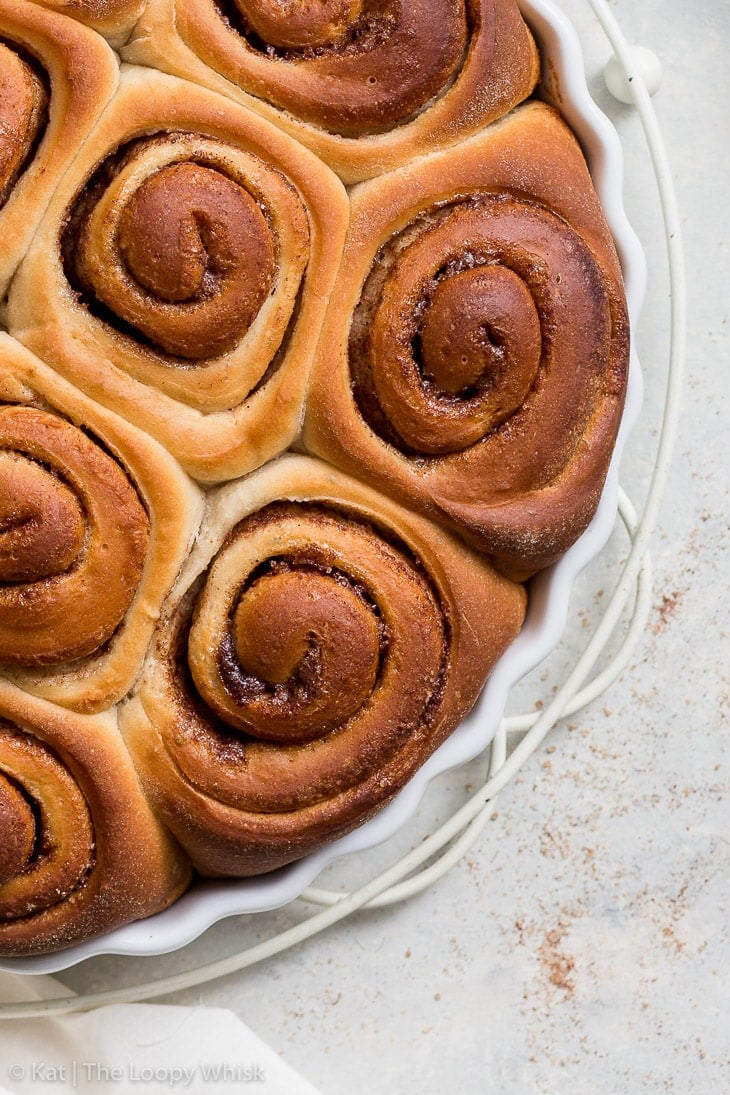 There’s a point to this. To my giving you a glimpse into my thought process as I develop recipes. It’s a strange mix of scientific approach and intuition developed through years and years of throwing things together and seeing what works. But it does work, and it can work for anyone – regardless of experience level.

The point is to get you into the kitchen and start experimenting. It’s not difficult. Vegan baking isn’t scary. It’s not impossible.

There’s this idea that vegan baking is bland and inaccessible to the average mortal. Sure, there will be spectacular fails, but with time, the balance between fails and successes will tip in your favour. Just… give it a go. It’s worth it. Promise.

And if my words don’t convince you… let these vegan cinnamon rolls do the talking. 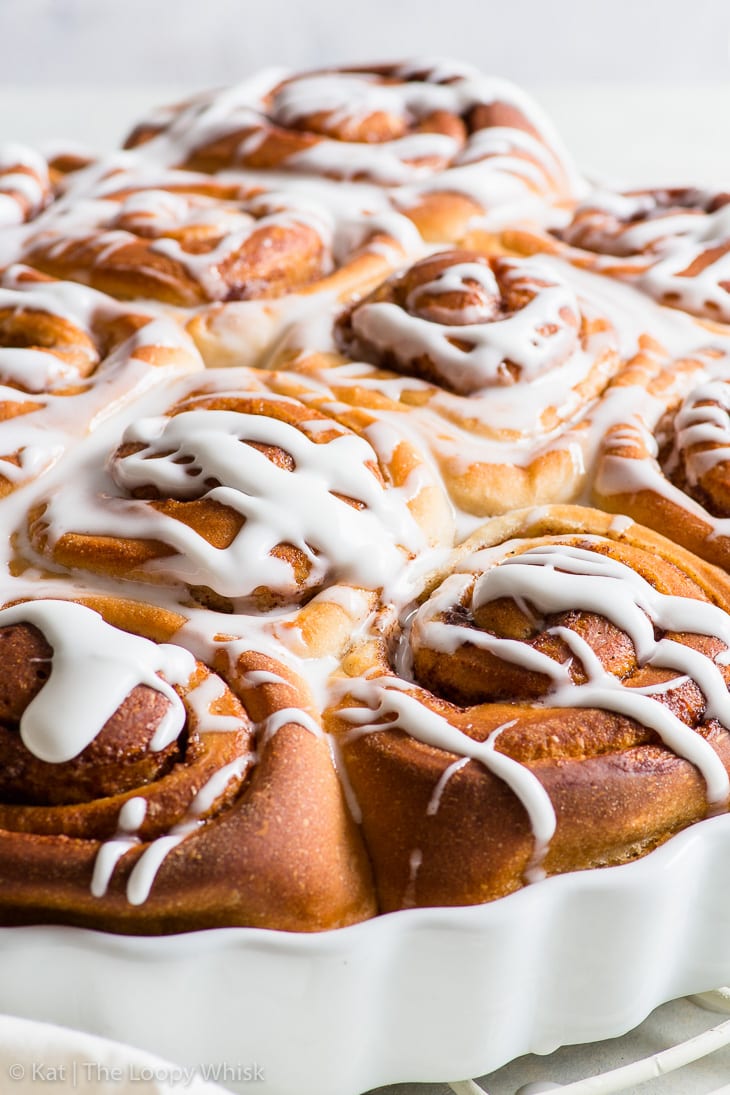 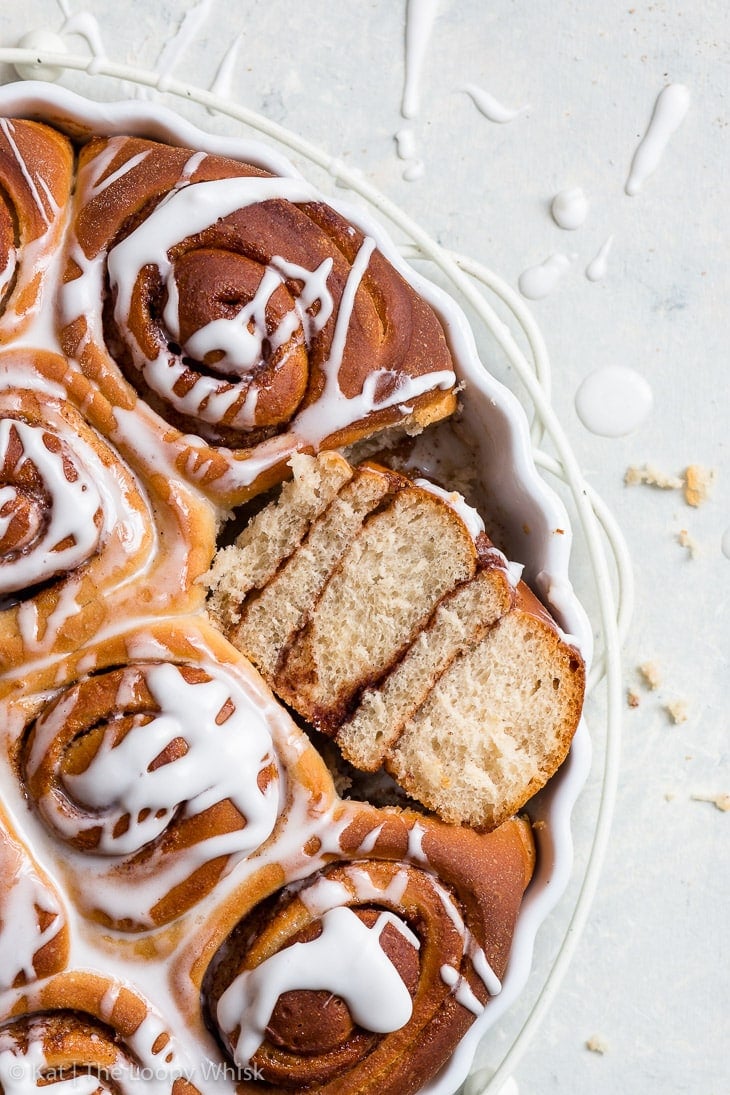 They’re fluffy. And soft. And so so cinnamony.

The frosting is perfect. Especially when you drizzle it onto still warm vegan cinnamon rolls and it melts slightly, soaking into the dough… It’s giving me chills just thinking about it.

And all of this?
Easy to make.
8 ingredients only.
Vegan.

Now, if that doesn’t prove that vegan baking can be freakin’ amazing… I don’t know what can. (Though if you’re still not convinced… I’m willing to sacrifice myself and make another batch of these. You know, in the name of scientific advancement, taste testing, veganism and my sweet tooth.) 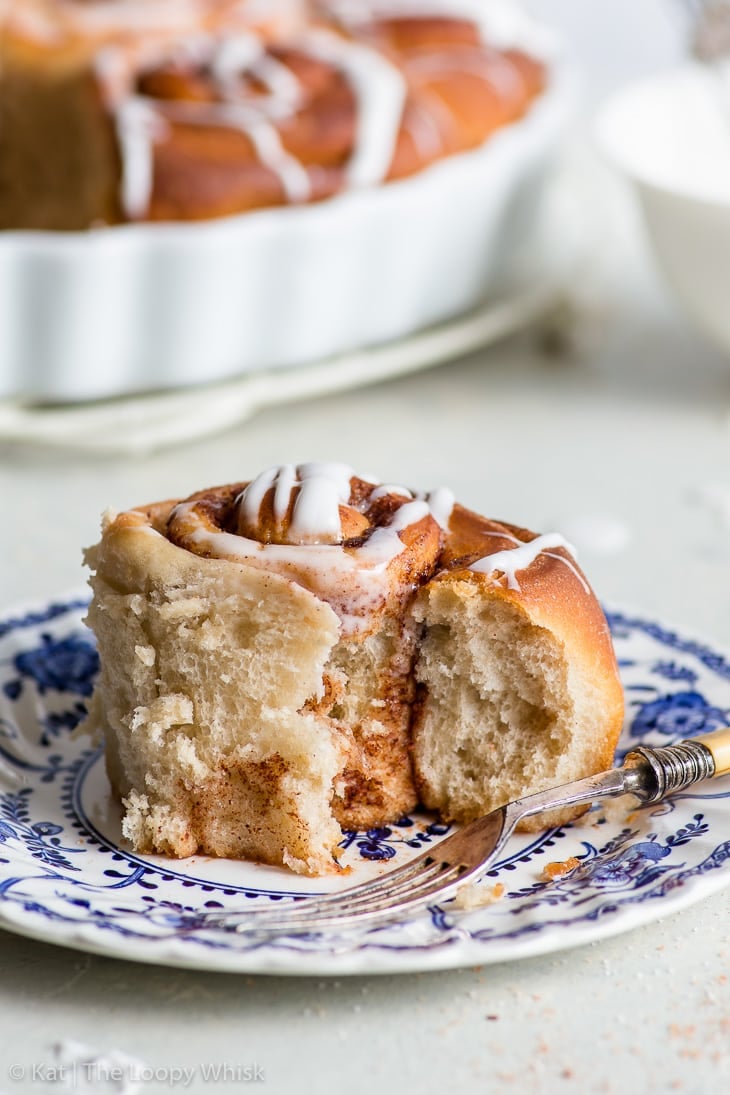 The Best Vegan Brownies. Ever.