Skip to content
Order my GLUTEN-FREE cookbook!
About meCookbookContactWork with me
Home » 3-Ingredient Vegan Chocolate Mousse with Aquafaba

This vegan chocolate mousse is every chocolate lover’s dream. With only 3 ingredients, it couldn’t be easier to make. And the aquafaba gives this delicious vegan dessert the most amazing fluffy texture. 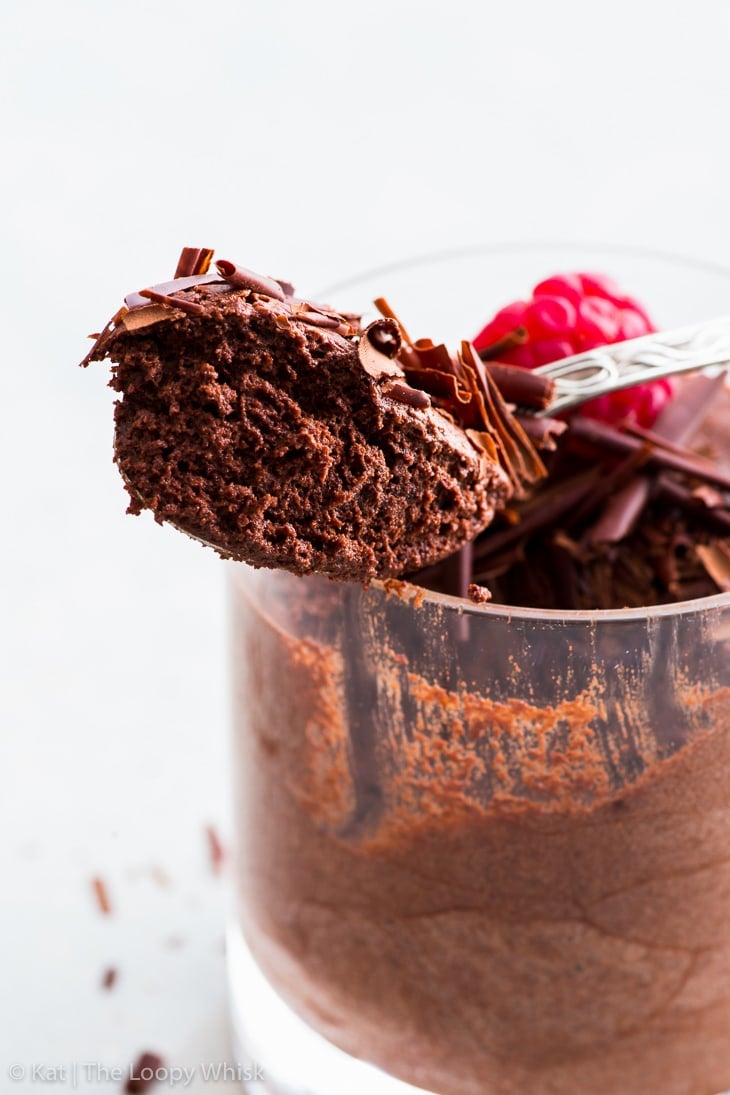 Pure chocolate decadence. That’s what this recipe should be called. Or… sheer fluffy chocolate bliss. I love this recipe. And I’m willing to bet the very last spoonful of this vegan chocolate mousse that you’ll love it too. That’s how certain I am.

The basis of this vegan mousse is aquafaba – a previously overlooked and underappreciated ingredient that’s been making headlines lately. It’s everywhere. And with good reason too – unlike many trends and Pinterest hacks that usually don’t work (at all)… this one actually does. And it’s brilliant.

It’s the aquafaba that gives this vegan mousse it’s light and fluffy texture – and that, combined with deliciously rich chocolate, makes this simple vegan dessert every chocolate lover’s dream. Have I mentioned it’s incredibly quick and easy to make? And it only requires 3 ingredients, all of which you probably have in your pantry right now! 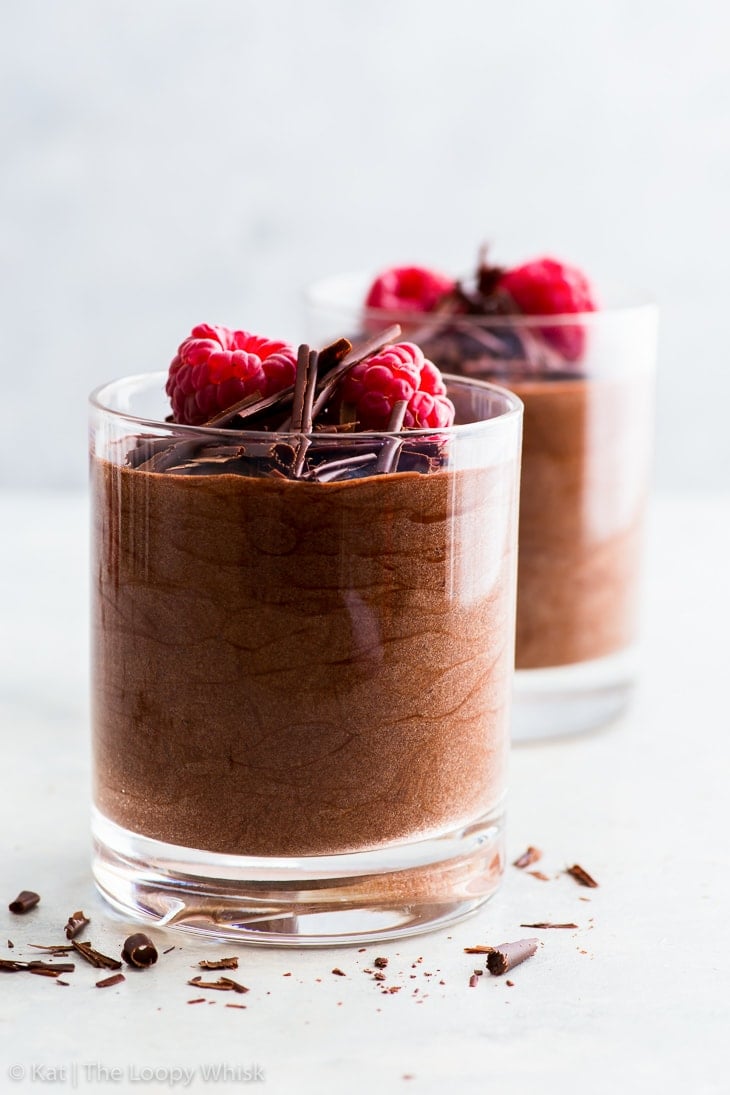 Before we get to the bits and bobs of making this wonderful chocolate mousse – if you like what you’re seeing, subscribe to my newsletter to keep up to date on the latest recipes and tips!

WHAT’S AQUAFABA AND HOW IS IT USED?

Aquafaba is the fancier (and catchier) name for the chickpea cooking water. Generally speaking, the term can be applied to the cooking water of any bean, but chickpeas are the most common choice. And lately, it’s gotten so popular, it even has its own website!

This complex mix of water, carbohydrates, proteins and soluble plant solids is every vegan’s dream. It has emulsifying, foaming, binding, gelatinising and thickening properties, which basically means that it can be whipped like egg whites and used to hold together cakes and other bakes (without them getting too crumbly)… just like egg whites.

In short, aquafaba is pretty much the perfect egg white substitute, and the answer to the egg-free and vegan baking and cooking problems. Well, at least some of them.

So far, it’s been used in everything from meringues and macarons, to muffins and cakes – with seemingly great results. I say “seemingly” because I used to be highly sceptical. The last time I tried whipping aquafaba, all I managed to get was a slightly frothy chickpea-tasting… soup? Not exactly encouraging.

As it turned out, the blame wasn’t with the aquafaba. It was with my lack of patience. As you’ll see in a few paragraphs, 5 minutes can mean the difference between that frothy soup and soft fluffy perfection.

If you want more information about aquafaba, here are some good reads:

It all starts with only 3 ingredients: a whole lotta high quality chocolate, aquafaba and sugar.

Yes, using a high quality chocolate is important – with there being no cream and no other ingredients to add their flavour to this vegan mousse, the flavour comes exclusively from the chocolate. So use a chocolate you love. A low quality or mediocre chocolate will result in a low quality, mediocre mousse. (And we don’t want that.) 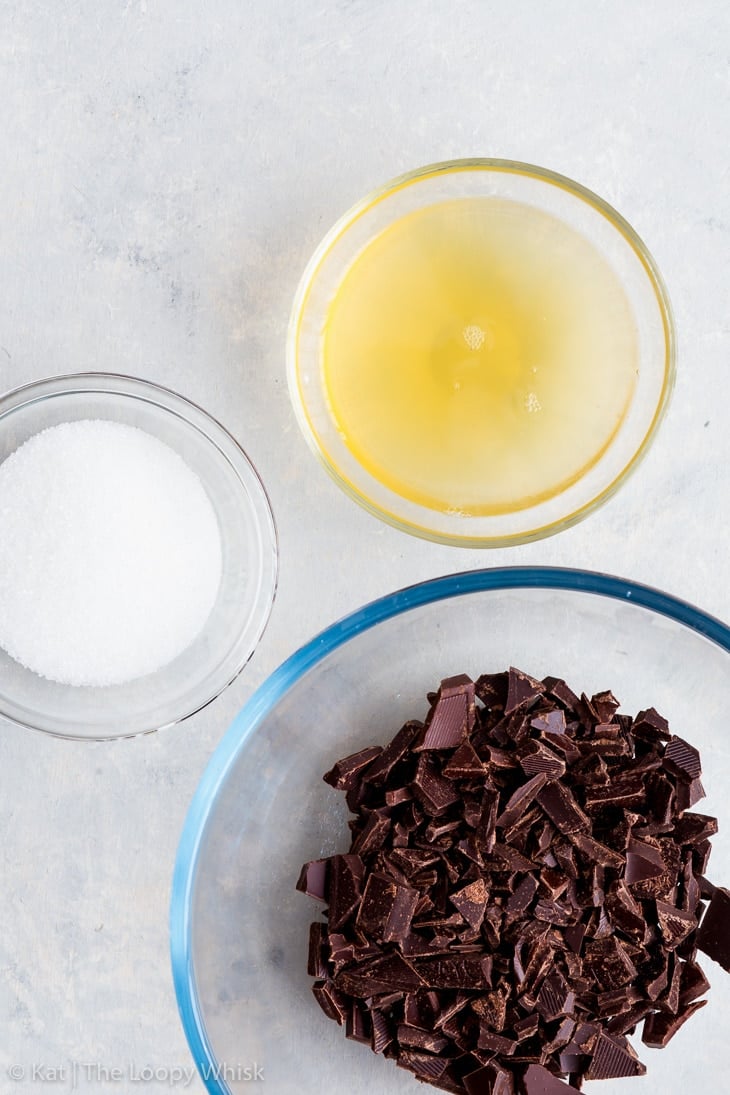 First, we’ll melt the chocolate over a bain marie, aka a pot of simmering water. Once melted, set it aside to cool, while we whip up the aquafaba and sugar.

Here’s where patience comes in. Whipping aquafaba takes longer than whipping egg whites – yes, even with a stand or hand mixer. Here’s how the aquafaba+sugar mixture looks after 5 minutes of whipping at medium-high speed in a stand mixer: 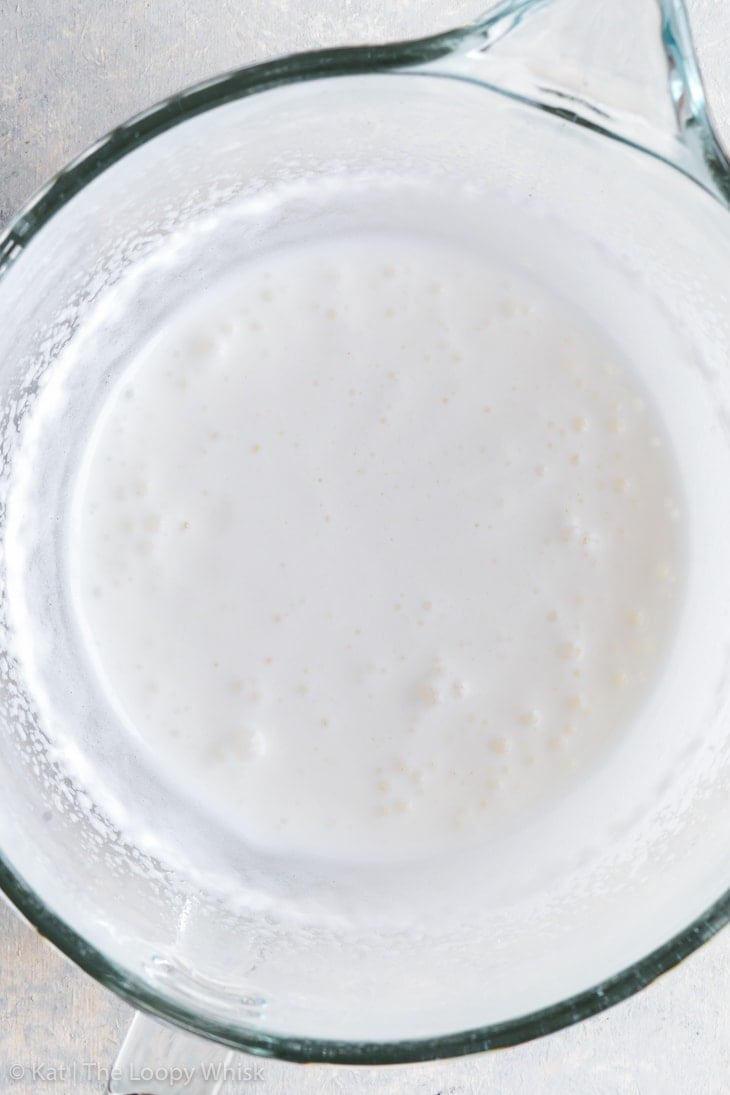 Not all that impressive, right? It certainly wouldn’t make a very nice mousse.

It’s tempting, at this point, to just give up and decide that this whole aquafaba thing is a scam.
Hold on. Wait a minute (or five). Here’s how it looks after 10 minutes: 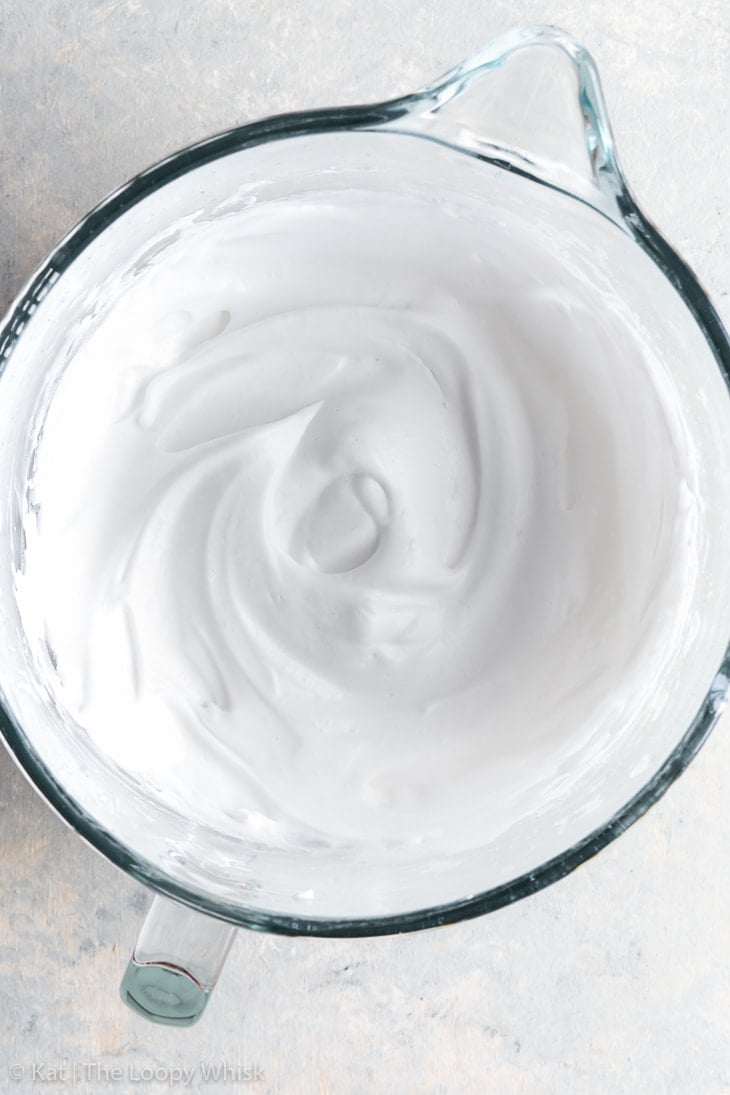 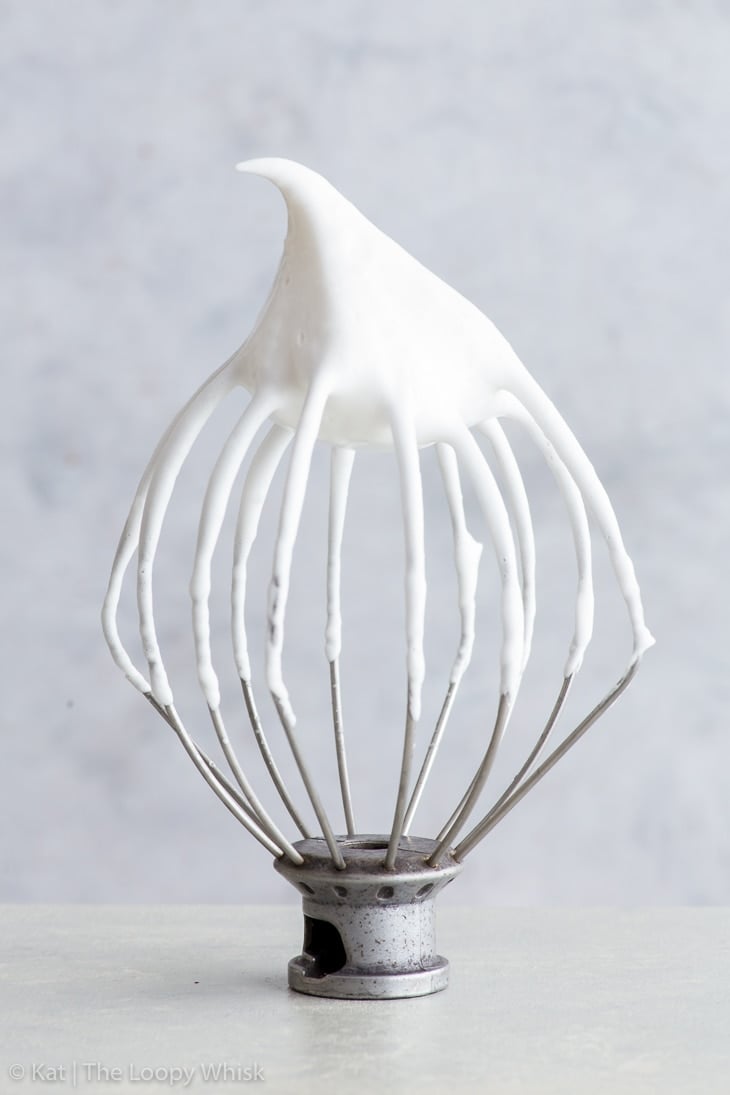 What a difference, right?! Look at that fluffy, airy perfection! Look how the peak holds its shape! And the taste, the texture… oh my! It’s almost marshmallowy in your mouth, all soft and cloud-like, only to melt away into sweet sugary nothingness.

Finally, we’ll fold in the melted chocolate, which is undoubtedly the best step of the whole recipe – I love how the ribbons of chocolate form in the whipped aquafaba, like delicious chocolatey art. 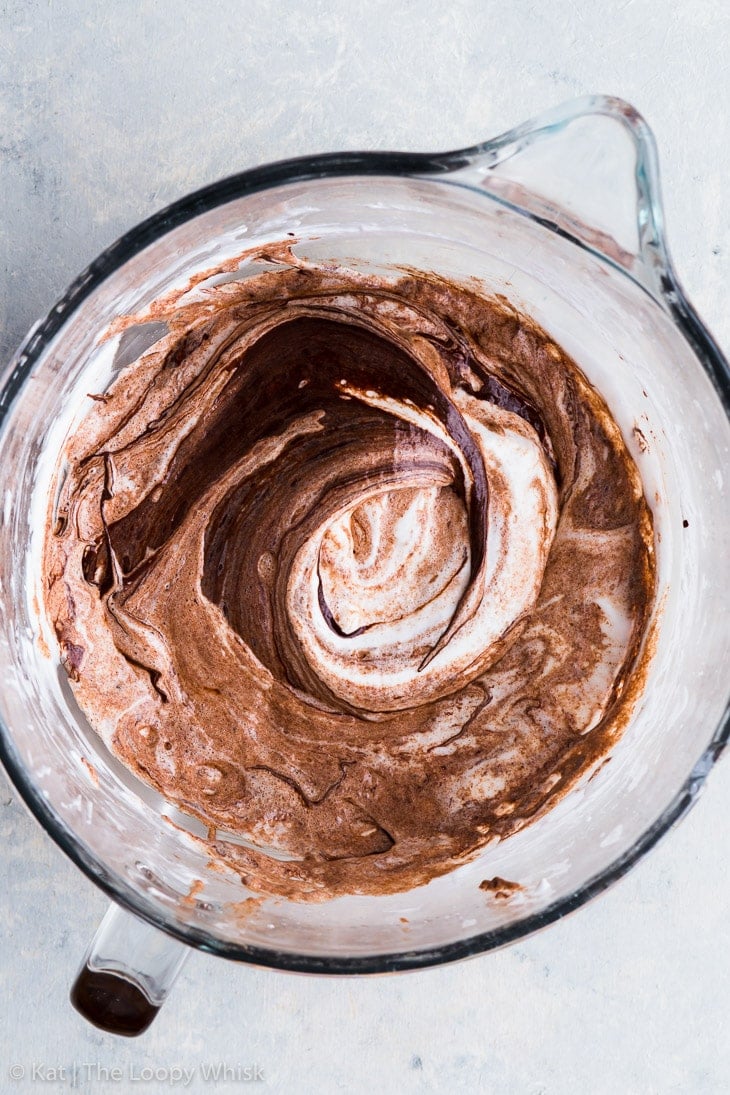 Then, all that’s left to do is to spoon the vegan chocolate mousse into glasses and refrigerate for at least an hour before serving.

OKAY, BUT DOES IT TASTE LIKE “NORMAL” CHOCOLATE MOUSSE???

Ummm… yes. Very much so.

There’s nothing not to love about this vegan chocolate mousse. It’s as light and airy as the best chocolate mousse out there, with that luxurious texture we all know an love. 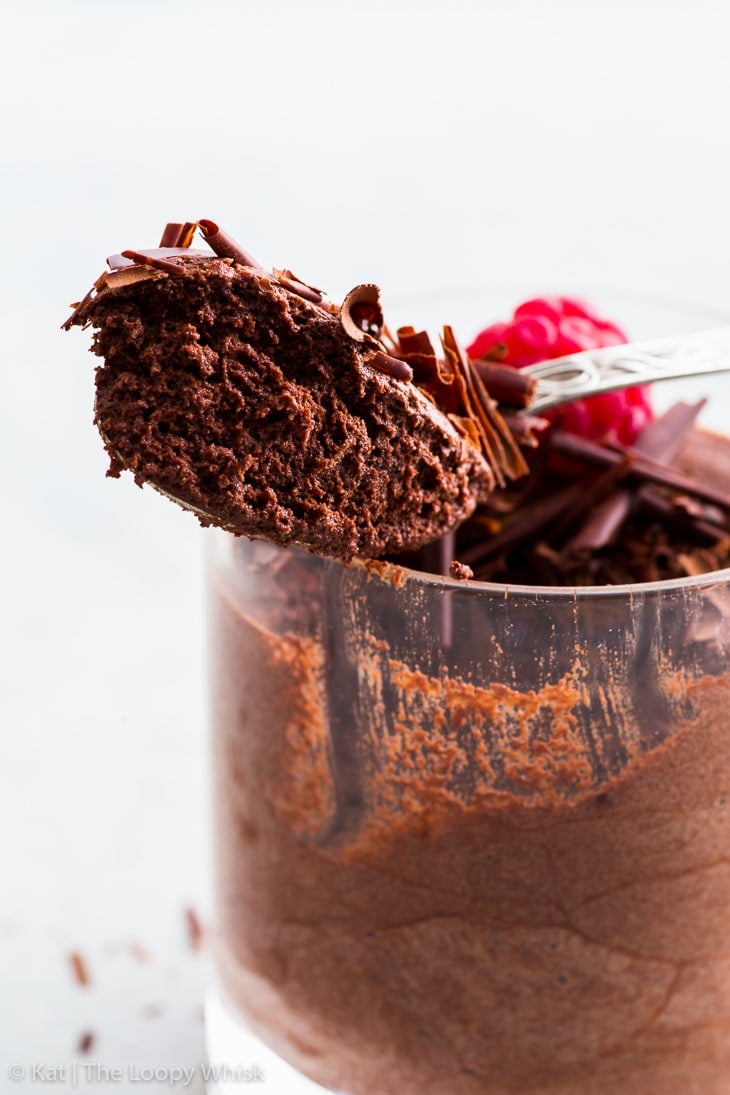 You can’t taste the chickpeas at all – it’s all sweet chocolate goodness. Just, without any eggs or cream and other dairy products. Which is amazing, even if you don’t have any special dietary requirements.

Because the absence of these other ingredients means that the chocolate has a chance to shine through in all its glory. Of course, you could easily modify and tweak the mousse, perhaps with a dash of vanilla or a pinch of chilli powder.

But in its essence, this dessert celebrates chocolate. And I’m perfectly okay with that. 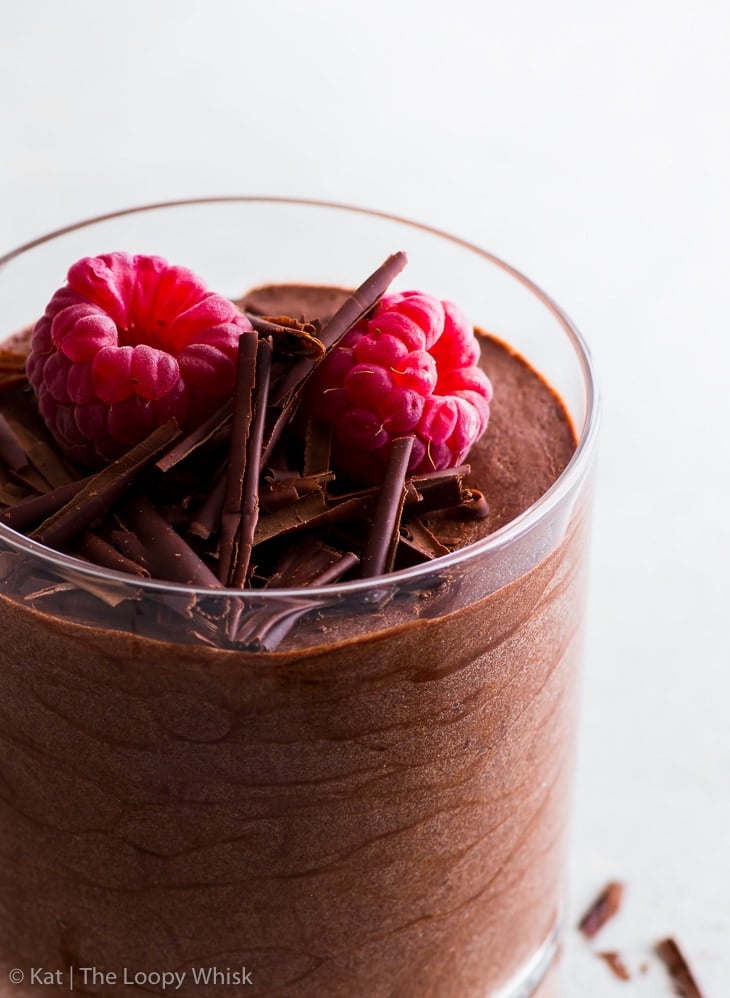 1. Should I cook my own chickpeas, or can I use the aquafaba from canned chickpeas?

Long answer: I prefer cooking my own chickpeas, simply because I know that there are no strange preservatives and additives in my aquafaba. In addition to possible health side-effects, I find that the additives often affect the taste (rather unpleasantly).

2. Why can’t I get my aquafaba to form stiff peaks?

There could be several reasons:

3. How long does it take to whisk aquafaba?

In general, at least 10 minutes. The exact time will depend on how concentrated or runny your aquafaba is, if you’re whipping it on its own or with sugar, how much aquafaba you’re trying to whip up… Just be patient and let it do its thing.

4. How much aquafaba is one egg?

5. What else can you make with aquafaba?

The list is almost endless! I’ve seen it used to make meringues, macarons, cookies, cakes, muffins, and more! You can definitely expect to see more aquafaba containing recipes on The Loopy Whisk in the new few weeks and months. (I’m on an aquafaba roll here!)

This vegan chocolate mousse is every chocolate lover’s dream. With only 3 ingredients, it couldn’t be easier to make. And the aquafaba gives this delicious vegan dessert the most amazing fluffy texture.
Print Rate
4.4 from 23 votes
Prep Time 15 mins
Chilling Time 1 hr
Servings 4
Author Kat | The Loopy Whisk

Note 1: If you’re a vegan who’s concerned about bone char used in refining sugar, you can see a list of companies that don’t use bone-char filters on the PETA website.
Tried this recipe?Mention @theloopywhisk or tag #theloopywhisk!