Pure chocolate bliss in every single bite – these gluten free vegan chocolate cupcakes are bound to become everyone’s favourite. They look amazing, taste spectacular, and are super easy and quick to make! Plus, you couldn’t possibly guess that they contain no gluten, no dairy and no eggs!

For a new and improved gluten free vegan chocolate cupcake recipe, check out this blog post (published May 2022). 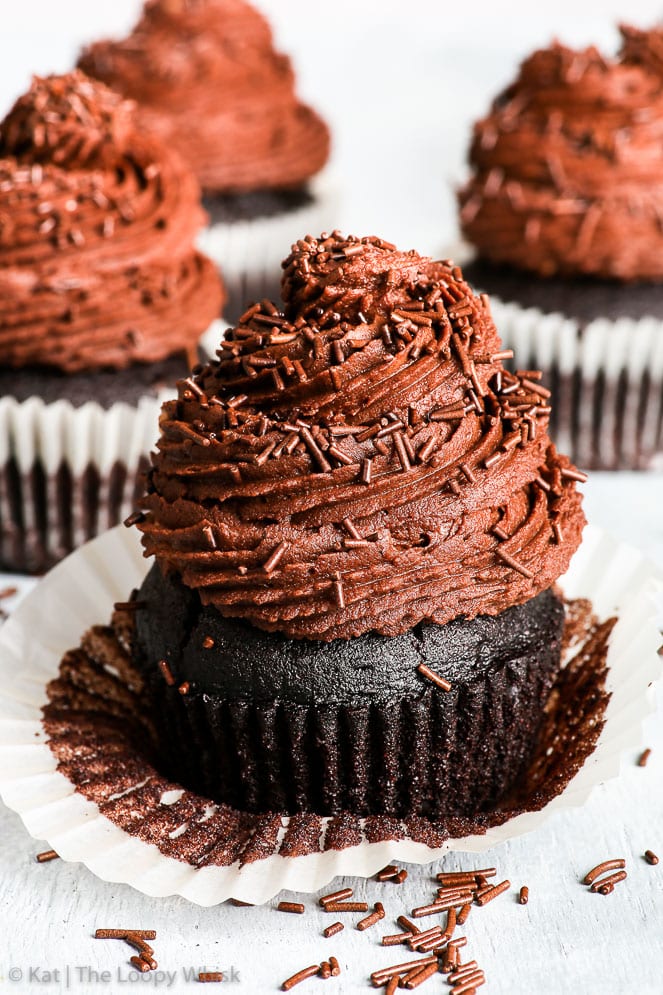 There’s something terribly charming about dark, almost fudgy chocolate cupcakes, topped with a small mountain of swirly, fluffy chocolate frosting. It’s basically chocolate on chocolate… with even more chocolate in the form of dark chocolate sprinkles.

Remember last week? We talked about how vegan baking is actually a piece of cake, and today we’re continuing that story.

The brilliant thing about last week’s vegan chocolate cake recipe is that it’s easily adapted to cupcakes – and that’s precisely what I’ve done here. And that, in essence, is what baking of any sort is all about. A few basic recipes that you can modify and adapt to any shape, size or flavour.

And this recipe is definitely one that you’ll find yourself coming back to again and again. Cupcakes, cakes, muffins – a few small tweaks and vegan chocolate goodness of all sorts is within your reach. 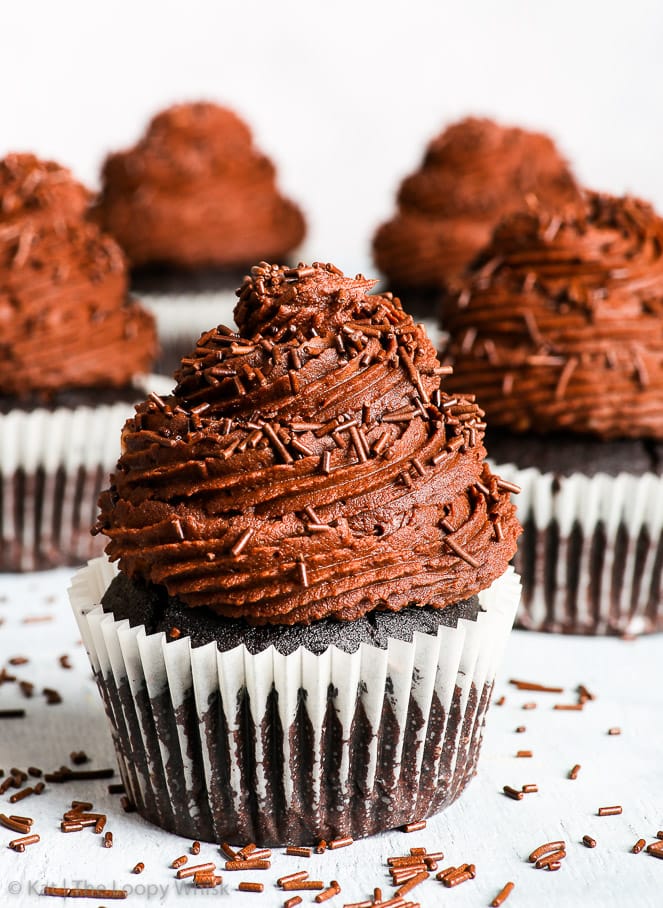 Another benefit of this recipe: it’s so darn simple. The vegan chocolate cupcakes themselves only require 9 baisc ingredients:

Making the vegan cupcake batter involves mixing all the ingredients together and baking them. Aaand… that’s it. 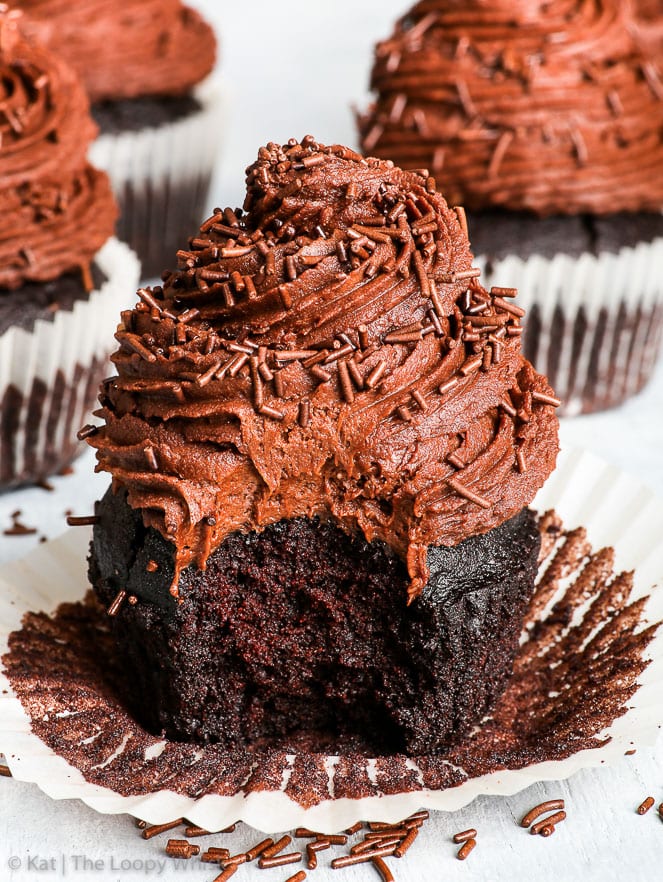 The end result is utter chocolatey perfection. Seriously, there’s nothing not to love about these gluten free vegan chocolate cupcakes. They’ve even passed the non-vegan/non-GF test: nobody could tell that they contain no gluten, no eggs and no dairy!

They’re perfectly fudgy, moist and chocolatey, without being too dense – they really are cupcakes rather than brownies. (Being too dense is actually a common problem with vegan baking – but not in this recipe!)

The frosting is airy, sweet, rich and ridiculously decadent. I piped it super tall (because more is more when it comes to chocolate frosting, right?) but you can decrease the amount if you want. (Why would anyone want to do that, though?)

And it all comes together within 45 minutes.

Yes, this vegan chocolate cupcakes recipe is the very definition of EASY and QUICK. But the results… oh, the results. Pure chocolate bliss in every single bite.

On that note: apparently I’ve used the word chocolate 25 times in this post (26 counting this sentence). That pretty much speaks for itself, doesn’t it? 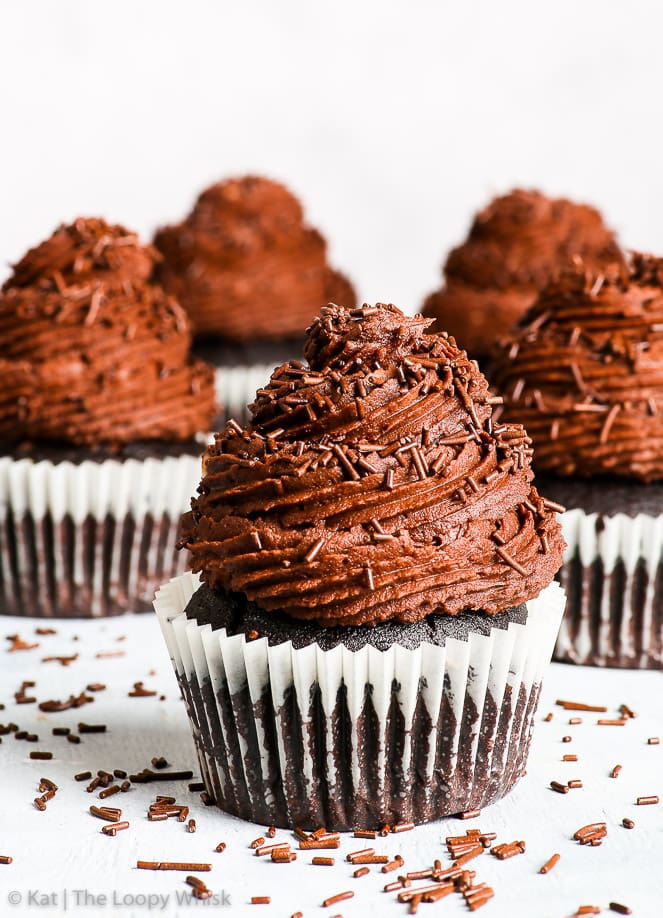 To make things easier for you, here are the products I’ve used and recommend for this recipe! So often, I get asked about what kind of gluten free flour I use or which kind of baking pans are best – and I know that the baking/cooking world can be overwhelming, what with the bazillion different products available out there. Well, no more.

The links below are affiliate links, which means I make a small commission for every purchase you make, at no additional cost to you. This allows me to fuel my – and your 😉 – chocolate addiction, so thank you for supporting The Loopy Whisk! (For more information, check out the Disclosure Policy.)