This gluten and refined sugar free pecan pie is a super delicious take on the traditional version. It’s far less sugar-heavy, and has a rich, aromatic pecan frangipane as the filling. The gluten free pie crust is buttery and flaky, and completes what is an amazing gluten free fall dessert. 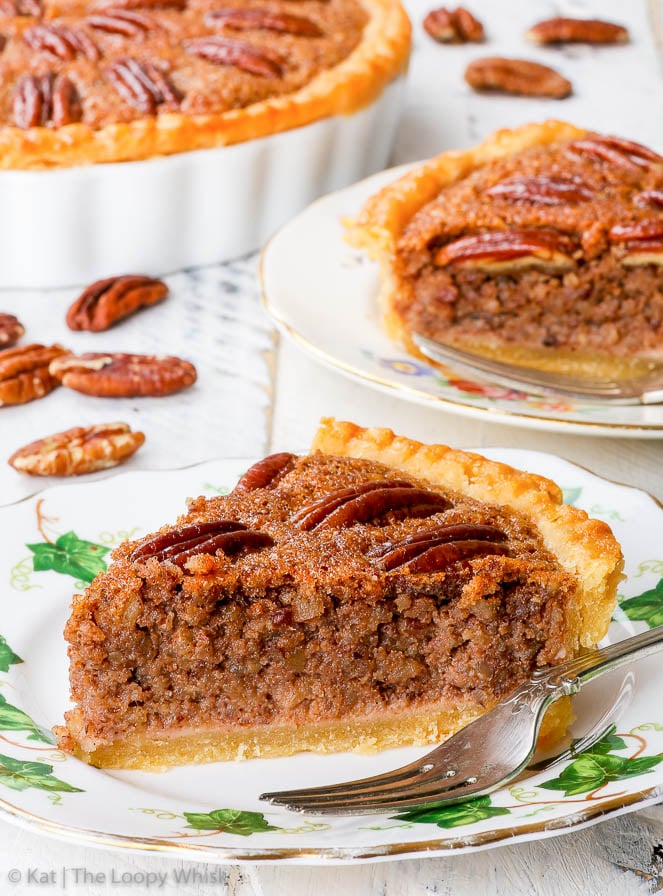 Okay, confession time. Before this recipe happened I’ve never eaten pecan pie before. It simply isn’t a thing in Slovenia (where I’m originally from). Pecans are a tricky thing to come by and nut-based pies aren’t hugely popular over there (other nut-based desserts are, but pies… not so much).

When I researched how to make this autumnal deliciousness, I’ve come across many a popular recipe – and they all have one thing in common. Humungous quantities of sugar. Now, I’m not an anti-sugar person (moderation and all that jazz), but 1 cup golden syrup AND 3/4 cup sugar? For a 9 inch pie? HOLY COW.

Even though this blog might make you think otherwise, I’m not so big on overly sweet food. It’s not so much that I find it unhealthy – because what is life without a sweet treat every now and then – it’s more that too much sugar masks other flavours.

In the case of pecan pie, I want to taste the pecans, the spices, the flaky butteriness of the pie crust… not just the overpowering sticky sweetness of the filling. So here’s my take on this highly popular dessert: gluten and refined sugar free pecan pie. 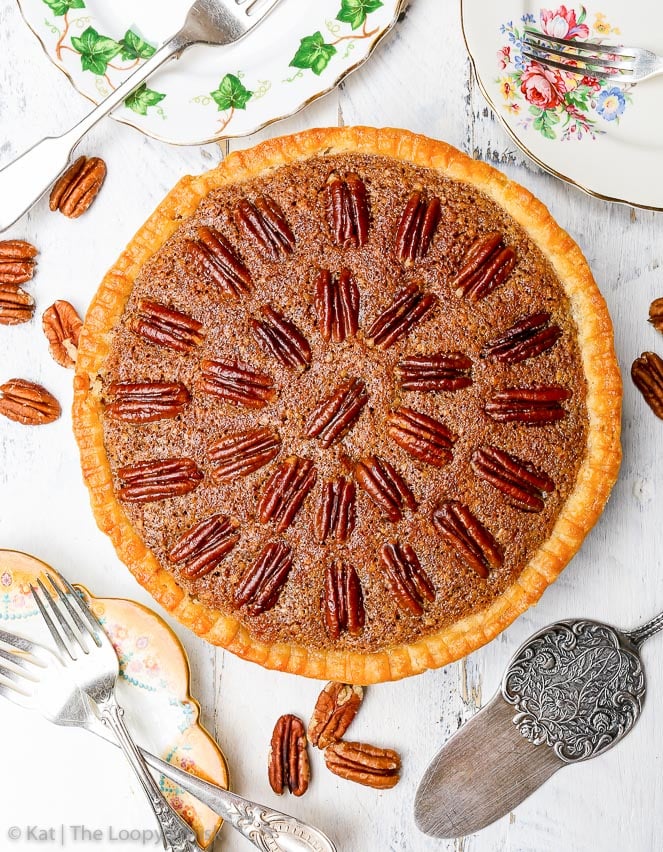 I’m sure traditionalists and hard-core recipe-followers will find fault with this recipe. It’s not traditional and… honestly, who cares. It’s delicious and leaves no doubt as to who’s the star of the show. (Pecans, if you can’t tell.)

You see, this version uses a (delicious, awesome, SO GOOD) pecan frangipane as the filling. You guys, I’m not exaggerating when I say I could eat it with a spoon (and I probably would have done it, too, if it weren’t for the raw egg inside). And it’s completely 100% refined sugar free.

Now, I know that maple syrup is sugar. No doubt about it. But the amount of it in this recipe is miniscule compared to the quantities of sugar normally used in pecan pie recipes. And here’s the thing: you really don’t need that much sugar – it still tastes like (the most amazing) dessert (ever)… it just won’t place you into a sugar coma. 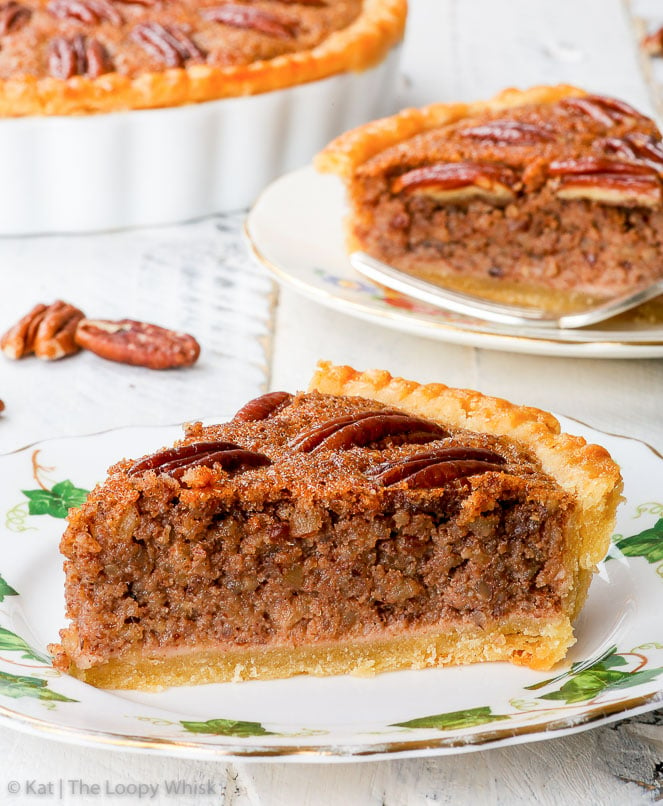 And here’s another advantage to using maple syrup: THE TASTE! Holy cow, the taste. When you pair the smooth, almost caramel-like gentle sweetness of maple syrup with the earthy nuttiness of pecans… it’s like autumn has thrown a party in your mouth. (Yes, I really love this refined sugar free pecan pie.) 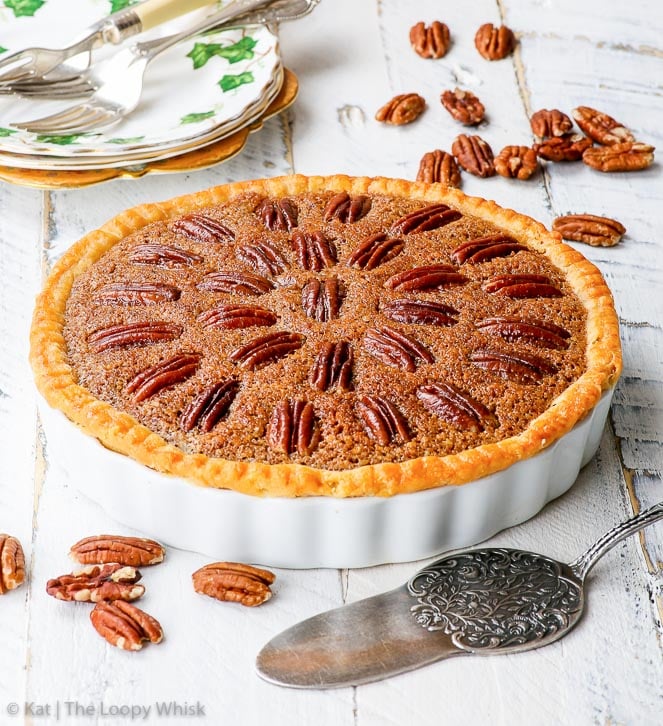 Even if you’re the biggest fan of the traditional version, I hope you’ll give this gluten and refined sugar free pecan pie a try. You won’t be disappointed, trust me. It’s rich, decadent, just sweet enough – and every bite tastes like a mouthful of autumn. 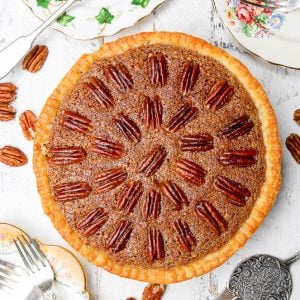 This gluten and refined sugar free pecan pie is a super delicious take on the traditional version. It’s far less sugar-heavy, and has a rich, aromatic pecan frangipane as the filling. The gluten free pie crust is buttery and flaky, and completes what is an amazing gluten free fall dessert. (And there's a video where you can check out the step-by-step instructions!) NOTE: The prep time doesn't include the refrigeration time.
Course Dessert
Cuisine Gluten Free
Prep Time 15 minutes
Cook Time 30 minutes
Total Time 45 minutes
Servings 8
Author Kat | The Loopy Whisk 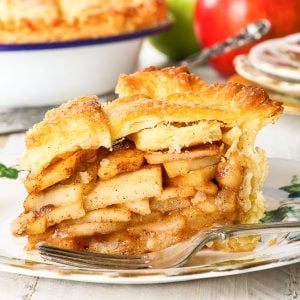 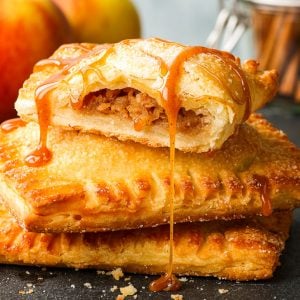 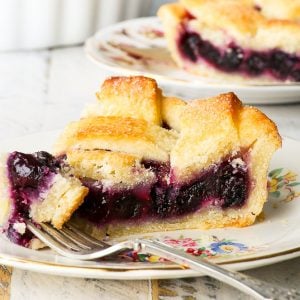 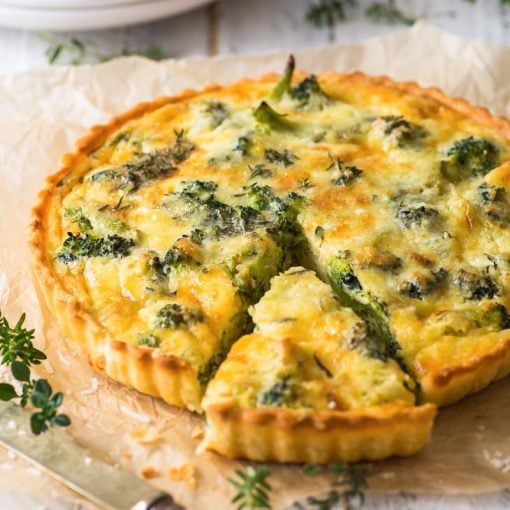 This vegetarian broccoli quiche is comfort food at its best – with a flaky, buttery pie crust and a delicious cheesy filling. […] 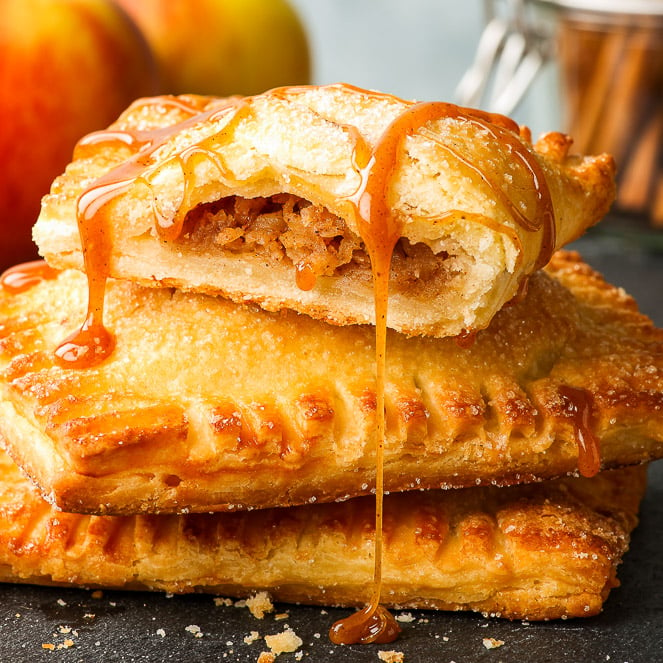 These caramel apple hand pies are the perfect gluten free dessert or snack, no matter the occasion. They are super easy to […] 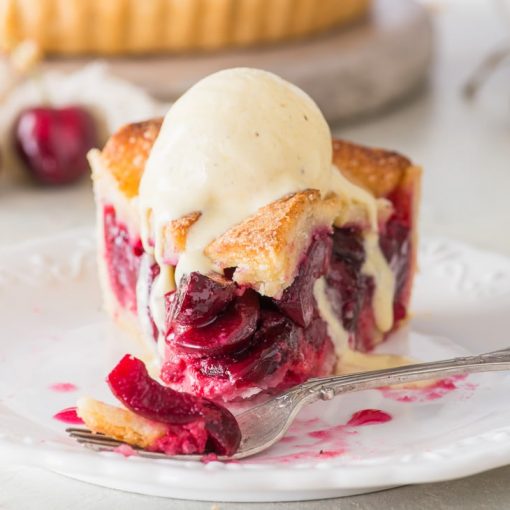 Easy to make, with a flaky pie crust and a juicy cherry filling – this cherry pie ticks all the boxes. It’s […] 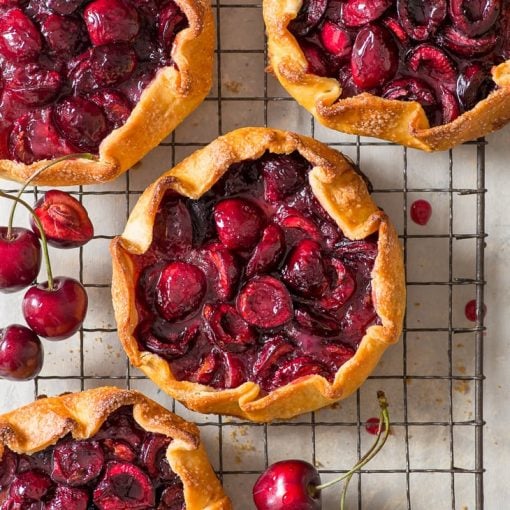 Boasting the perfect flaky, buttery pie crust and a juicy cherry filling, these cherry galettes will have you coming back for seconds… […]