These healthy rainbow popsicles are 100% natural, made with no artificial dyes or food colourings. Just wholesome, plant-based ingredients. They are gluten, dairy and refined sugar free, as well as vegan and paleo. But most importantly, these fruit popsicles are absolutely delicious – the perfect refreshing summer ice cream treat. 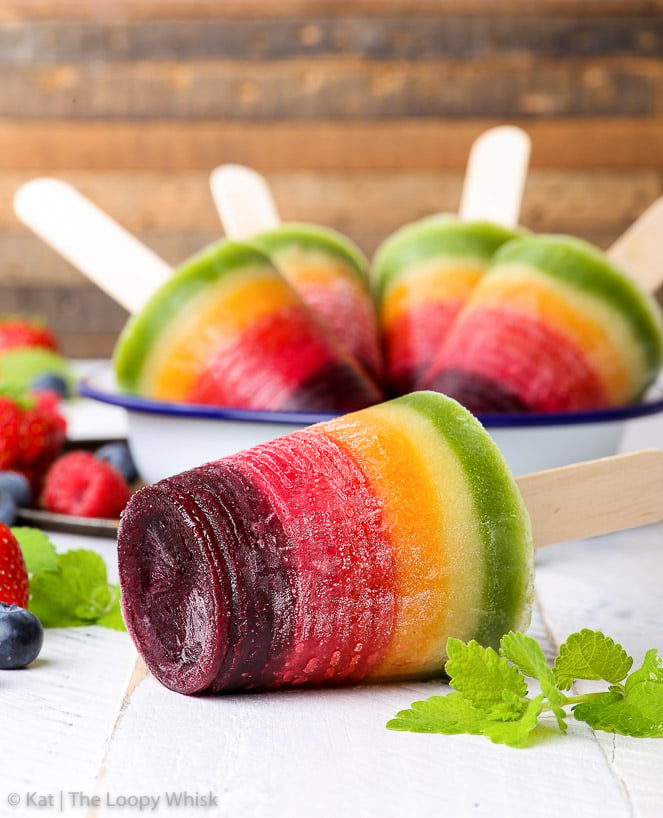 The timing of this rainbow popsicle recipe is purely coincidental, but I prefer to think of it as serendipity. Because rainbows are amazing, popsicles are fun (and delicious), and everyone should be allowed to be themselves. And regardless of whether being themselves involves pink ombre hair, believing that Hogwarts is real or loving someone of the same gender – well, who are we to say no?

(The usual “as long as they don’t harm anyone, don’t kick puppies and do like chocolate” applies. Of course, the chocolate part is completely arbitrary, kicking puppies is just… why would anyone… ? … and no, we won’t be having a ridiculously pointless discussion as to what “harming anyone” means.)

Don’t think I’m making light of the issue. It’s a serious one, but (and this might be because of my open-minded upbringing) I’ve always found it… silly, to put it nicely… that people are offended or feel threatened by anything out of the ordinary. We’re all unique, and that necessarily leads to differences – why not embrace it?

And that’s all I have to say on that topic. Not really, I could go on (and on and on), but you’re all here just for the pretty pictures and the recipe, right? 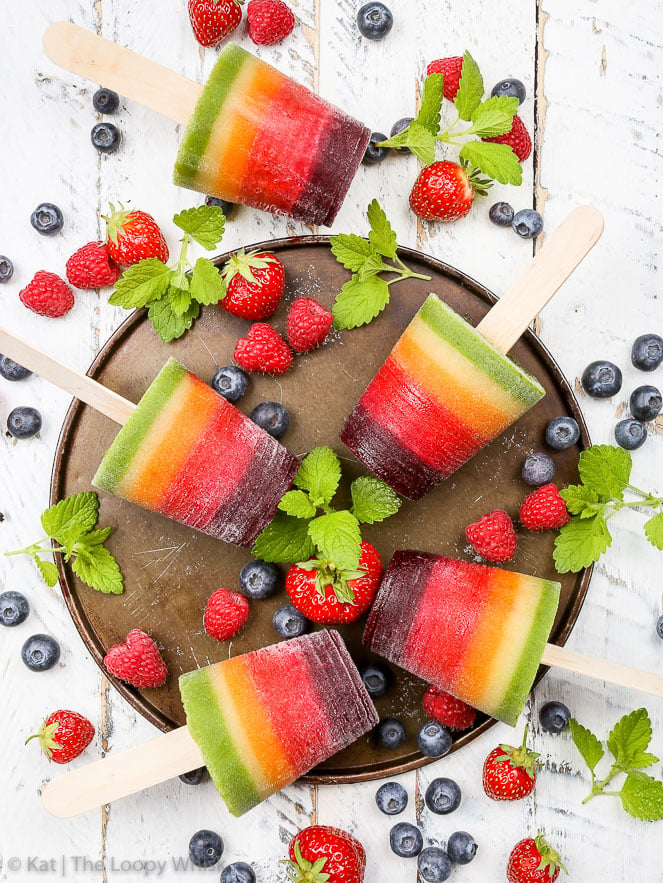 Onto the colourful refreshing deliciousness at hand. These healthy rainbow popsicles. Would you believe me if I told you that they taste even better than they look? Well, they do. They are also 100% natural, in that no artificial dyes and food colourings are involved. Just our good old friend the fruit (and one veggie, but shhhhh), some almond milk and maple syrup.

You know what isn’t in these rainbow popsicles? Bananas. That’s right – no bananas! Now, I’m all for “nice-cream” (frozen banana ice cream for the uninitiated) in all of its shapes and forms. But I know many people don’t like bananas, and really, they simply aren’t necessary here. Plus, they would dilute the wonderfully intense colours (100% natural, remember?). 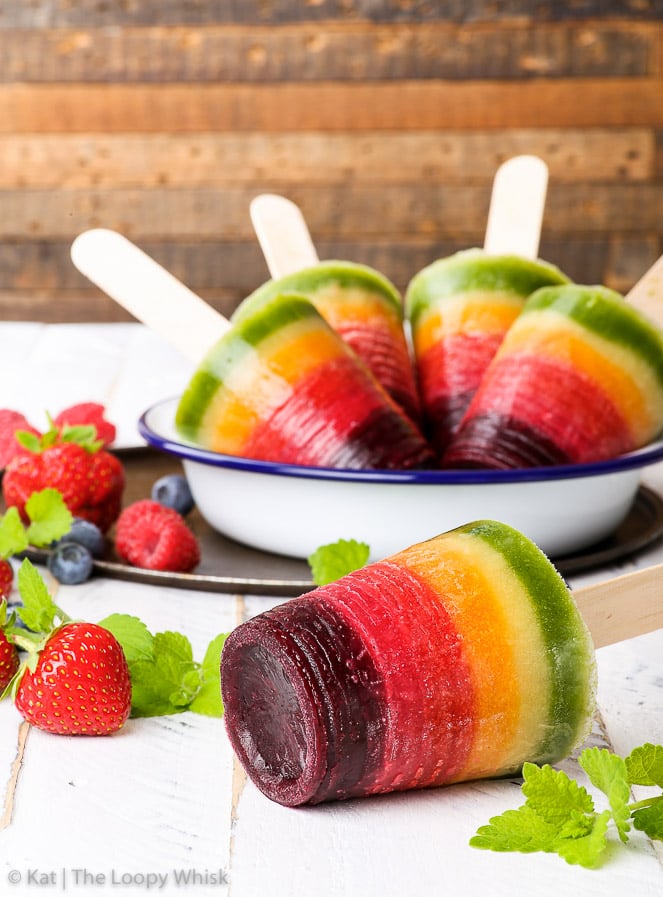 Now, let’s get one thing out of the way. This recipe isn’t quick. Don’t get me wrong, these rainbow popsicles are super easy to make and there isn’t much work involved, but the recipe itself takes… quite a while. Because there are no bananas all mixtures are quite liquidy. This means that each layer has to be about 80% frozen before the next one can be poured on… and then there’s the overnight freezing.

I know, I know. You want it all done in 10 minutes, and you want it to look and taste amazing, and while we’re at it, can I get you a magic stick as well? Some recipes just don’t work like that. Plus, you can get it all prepped in about half an hour and then remember to pour the next layer every 45 minutes to 1 hour. 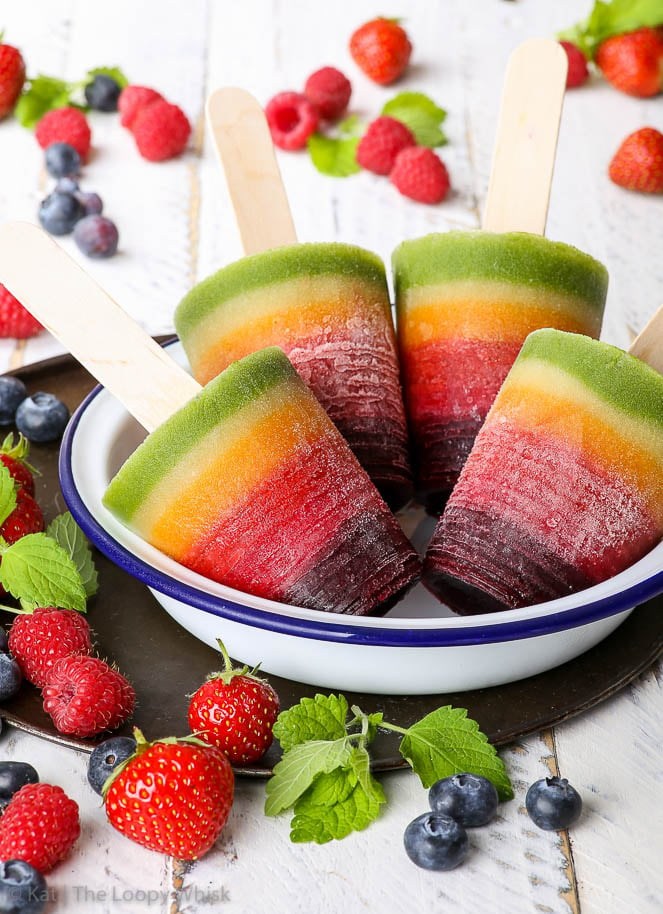 And… it’s just worth it. These healthy rainbow popsicles are downright drool-worthy. Each layer on its own is amazing, but together… WHOA.

There’s the delicious blueberry,
the refreshing raspberry,
the aromatic strawberry,
the flavourful apricot,
the exotic pineapple, and
the unexpected – AMAZING – surprise: the swiss chard + mint combo. (So. Good.)

You can eat it layer by layer, or get all the flavours into one mouthful. Your call. Because, remember, we’re all about being yourself. And if your ~authentic~ self (that’s the trendy way of calling it, isn’t it?) wants to eat these super duper healthy and 100% natural rainbow popsicles in a certain way… all I have to say to that is: enjoy. 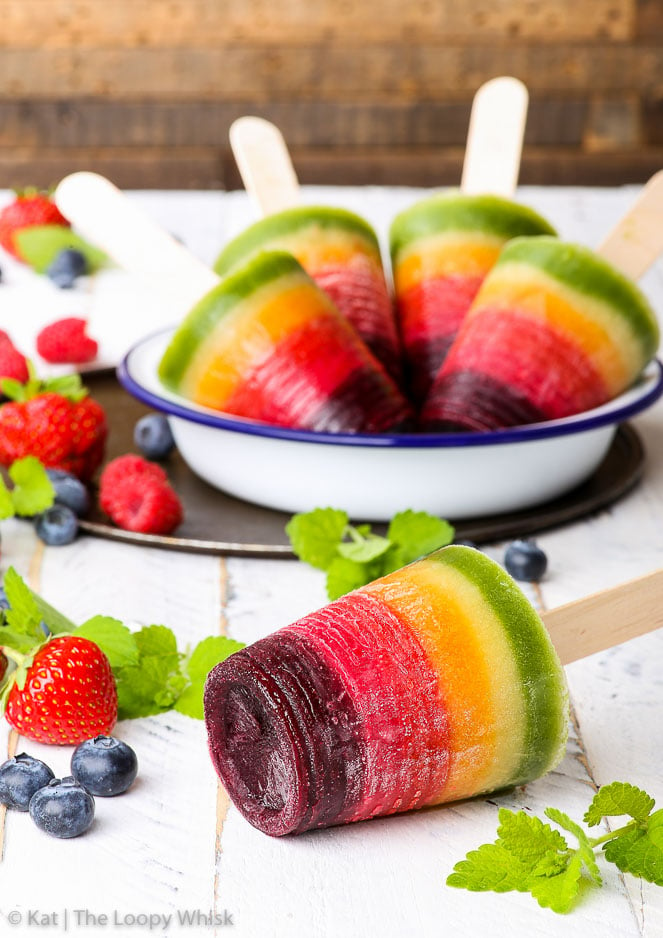 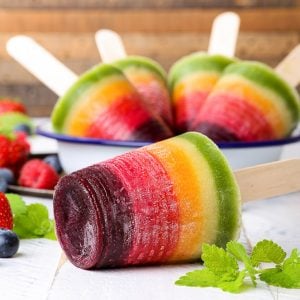 For all other layers: 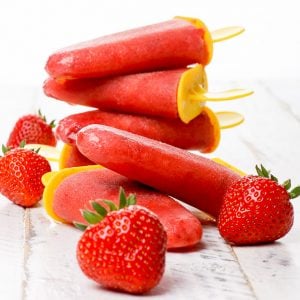 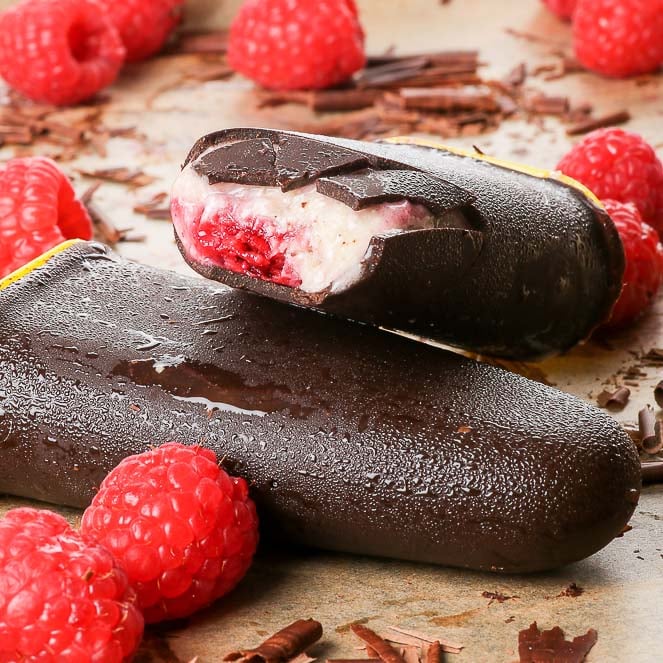 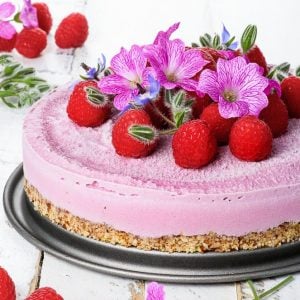 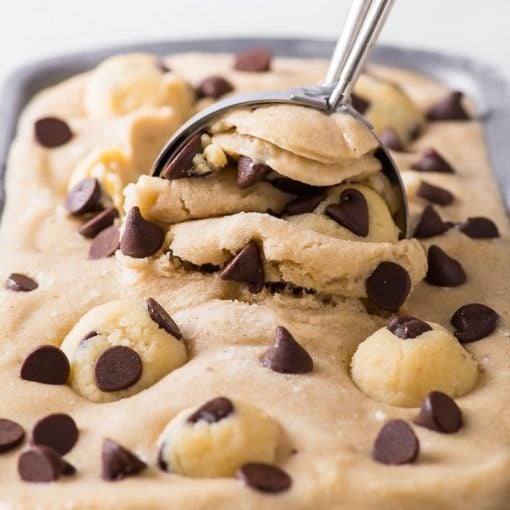 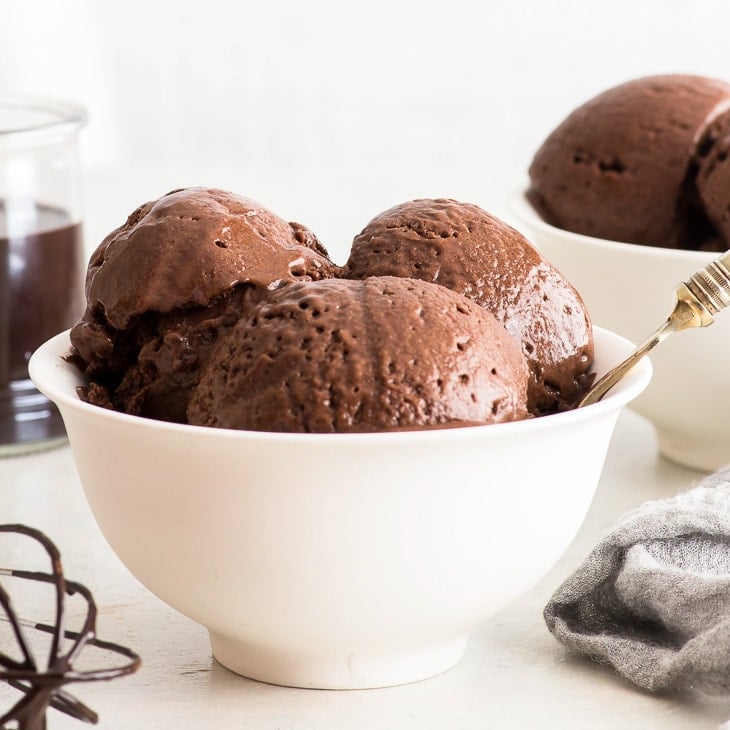 Do you love chocolate? Is ice cream your favourite cold treat? Then you’ll love this healthy chocolate ice cream – made with only […] 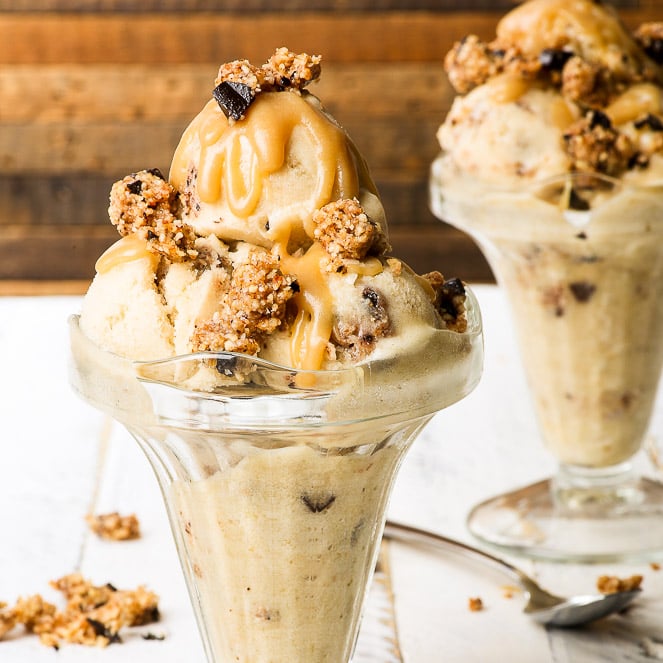 This healthy cookie dough ice cream sundae is everything you’d want a sundae to be, plus more. There’s the amazing vegan refined […] 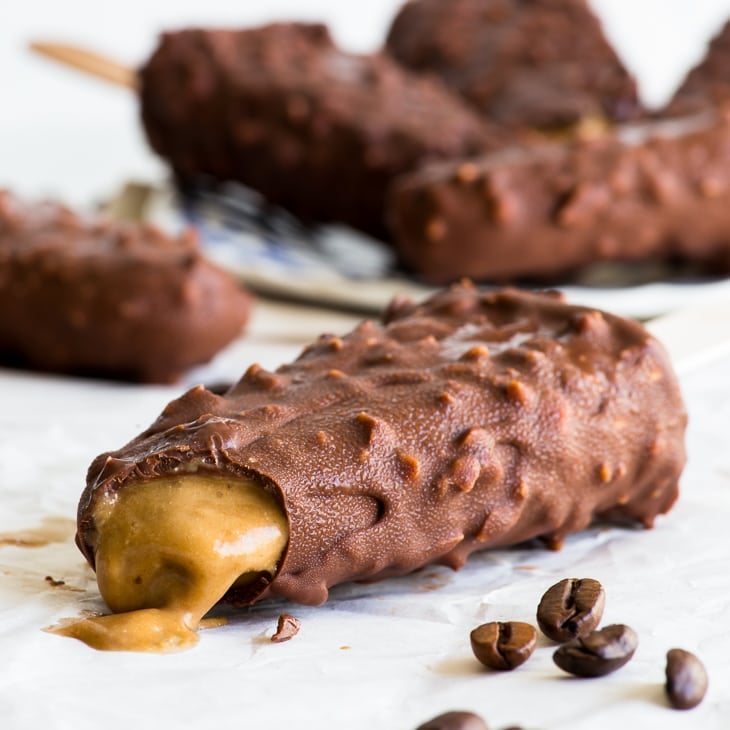 You need these in your life. Not only are these coffee ice cream bars healthy, they’re also ridiculously decadent and just downright […]