Crunchy crust meets creamy coffee and chocolate layers in these raw vegan chocolate coffee cheesecake bites. Aside from being dangerously delicious, they’re almost too pretty to eat and super simple to make, as well. Once you taste this raw vegan dessert without coconut oil (!) you’ll want to make it again and again. And again.

I’ve been on something of a raw vegan dessert roll lately (proof right here and here). Up to a few weeks ago, making a raw vegan dessert seemed like a far-away dream, both exhilarating and kinda scary at the same time. There is a certain sophisticated quality to raw desserts, with their polished edges, amazing textures, colourful appearance and intense flavour, which can make them seem as something to strive for, always remaining just out of your reach.

That being said – it turns out that making raw vegan desserts is actually a piece of cake. Or a cheesecake bite, in the cake of these absolutely delightful raw vegan chocolate coffee cheesecake bites. First of all, chocolate + coffee = taste explosion of fantastic proportions. Fact. Second of all, combining a crunchy crust made from almonds, cashews and maple syrup with two creamy layers of chocolate and coffee cashew cream… pure genius. Just sayin’. 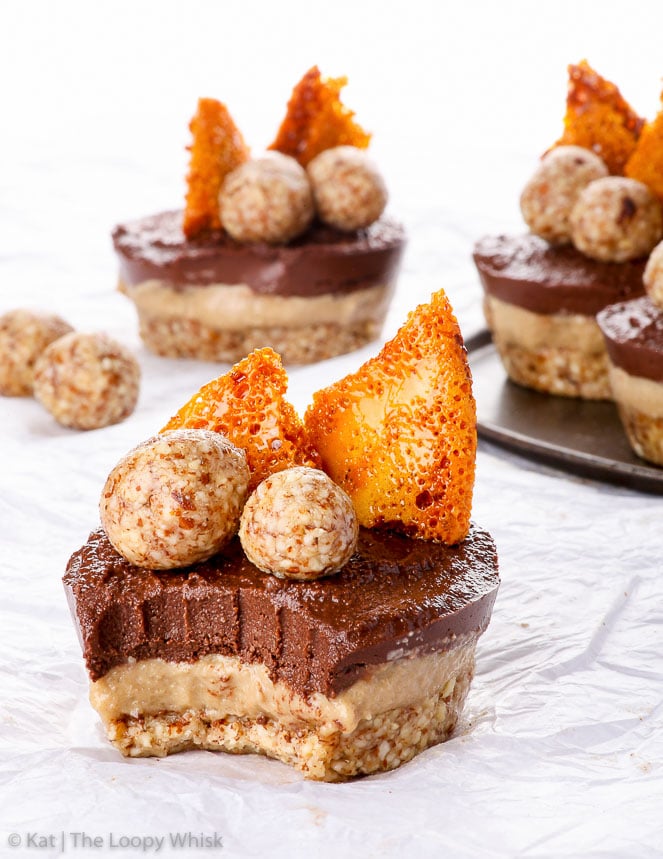 Have I mentioned that these vegan cheesecake bites require only 6 ingredients? Yes, really. In a way, it’s their simplicity that makes them so spectacular. It’s all about flavour. Okay, and they just so happen to look really pretty.

The almond and cashew nut crust is nice and crunchy, and sets in the freezer to give a granola bar-like consistency, that’s to say: it’s super yummy! The two layers of “cheesecake” cream filling have the same basis – soaked cashew nuts blended with some maple syrup. In goes the coffee to make the coffee layer, and the cocoa powder, unsurprisingly, goes into the chocolate layer (you can totally use melted chocolate, if you want). 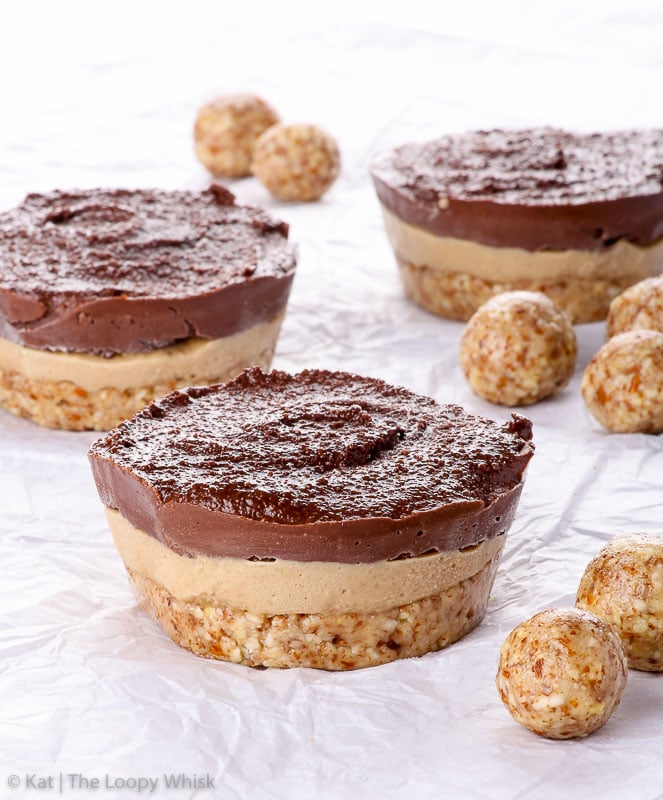 Have you noticed one ingredient that isn’t here? Yep, that’s right: no coconut oil! Full disclaimer: these lovelies came about because my mum isn’t a fan of coconut oil and I decided to try my hand at making a coconut oil-free raw vegan dessert. Read: I decided to throw some yummy things together and hoped it works. Spoiler alert: it does work, even without the biding strength of coconut oil.

You see, coconut oil is lovely because it’s solid even at room temperature and it therefore lends stability to raw desserts. As it turns out, it’s not 100% necessary – at least not for these vegan cheesecake bites. In fact, its absence makes them better, since they’re creamier and fudgier than your usual raw vegan dessert.

Having made the fillings, all that remains is to spoon some of the coffee cream onto the frozen crust, freeze, make the chocolate cream layer, freeze again… and then they’re all yours to savour and gawk at. I know, they seem almost too pretty to be true. Yes, it’s that simple to make them. Really, they’re that delicious. And you can definitely totally make them. So get going!

P.S. I’ve decorated them with homemade honeycomb candy, which obviously isn’t raw… that part is optional. But it looks so fun and lovely, I simply couldn’t help myself. 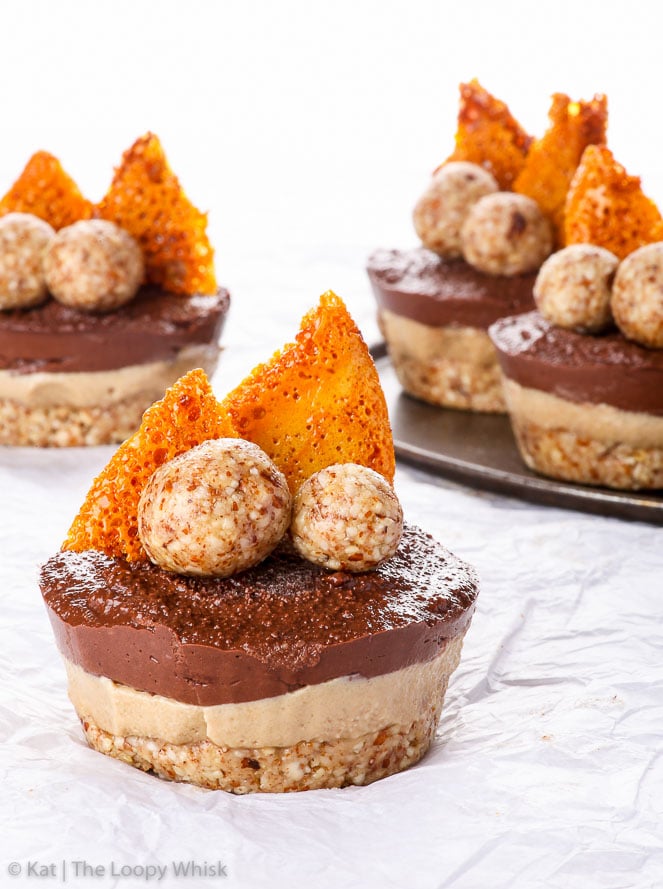 Note 1: It's up to you how much coffee you use. Obviously, use more for a greater coffee kick. You can also use espresso or any other form of coffee you have on hand. Note 2: The homemade honeycomb candy isn't raw, but it can be vegan (if you use golden syrup)... but it's too pretty and I couldn't resist. Totally your call if you use it or not.
Tried this recipe?Mention @theloopywhisk or tag #theloopywhisk!

Can’t get enough of the raw vegan goodness? I feel you, and have just the solution! 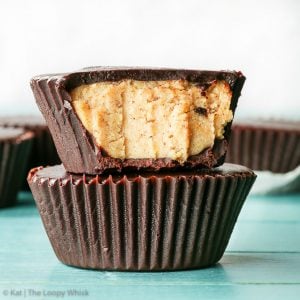 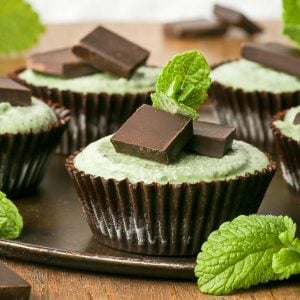