These coconut orange mini cakes may be ‘mini’ but they have the taste of a cake giant. Fluffy yet dense sponge chock-full of dessicated coconut. Silky and rich ultra orange-y buttercream. Smooth orange curd with just the right amount of tartness. Textures galore. These mini cakes have the ability to transport you to an exotic island where you can enjoy the feeling of sand between you toes and the heat of the sun on your skin, all in a single bite. 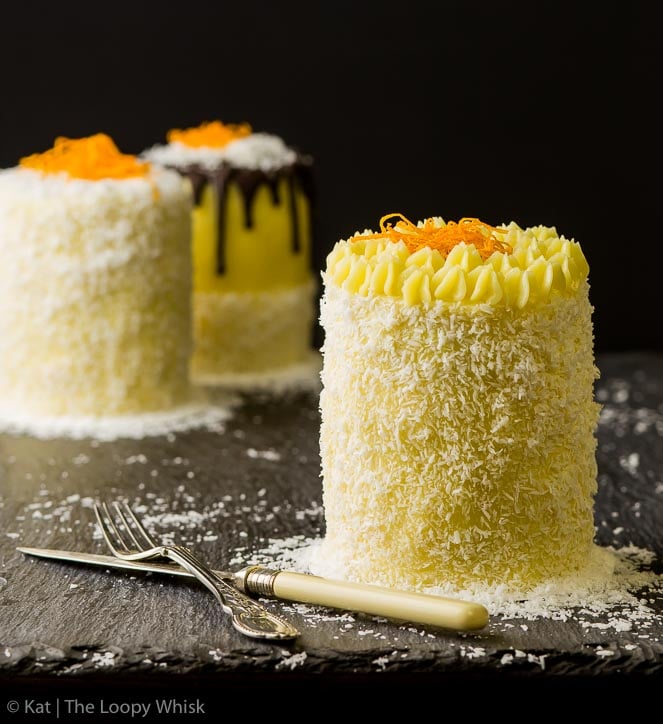 How many people are already fed up with winter? Raise your hand. That many (on the northern hemisphere, at least)? Thought so. It’s all wet and cold and dreary and not nice at all. Oh, you’re not from the UK and all you can see is brilliant sunshine and fluffy snow and it’s all basically straight from a fairytale? Well, good for you. For the rest of us, I’m providing an escape – in the form of these delectable coconut orange mini cakes. They may look like adorable little heaps of fluffy snow but they taste like a vacation on an exotic island. Where it’s sunny. And pleasantly hot. And there’s a clear cerulean ocean stretching beyond the horizon. And warm sand between our toes. And also the potential hazard of a coconut falling on our heads. You know, that kind of island. You’re welcome. 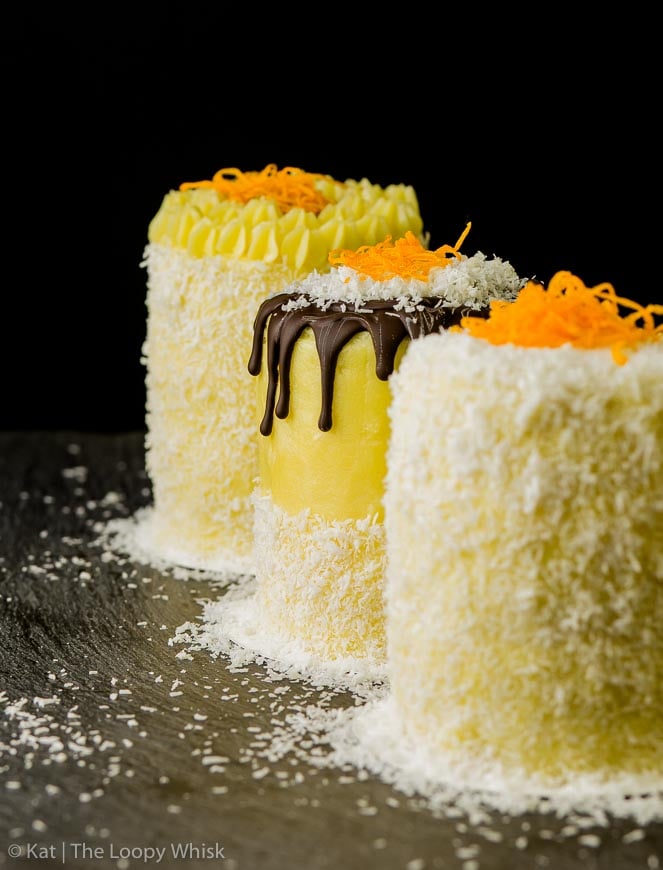 These cakes may be mini, but they have the taste of a cake giant. Furthermore, mini-ness (Is that a word? Probably not but just roll with it…) for whatever reason increases the cuteness factor exponentially. Mini-ness also allows chronically indecisive people (hi there) to play around with many different decorating styles rather than, you know, stick to a single one. Should I cover the whole cake in coconut? Ohh, how about I make a bottom coconut border and then drizzle chocolate on top? Or or or, what if I cover just the sides in coconut and then pipe a decorative border on top and create a chocolate pool in the middle? Ohh, what if… nope, we’re stopping here. Although, a ‘naked cake’ might also be… No. That’s it. Three decorating variations. It’s actually a win-win situation: I get to indulge my indecisive tendencies, and you get three cakes for one. See – all’s well that ends well. 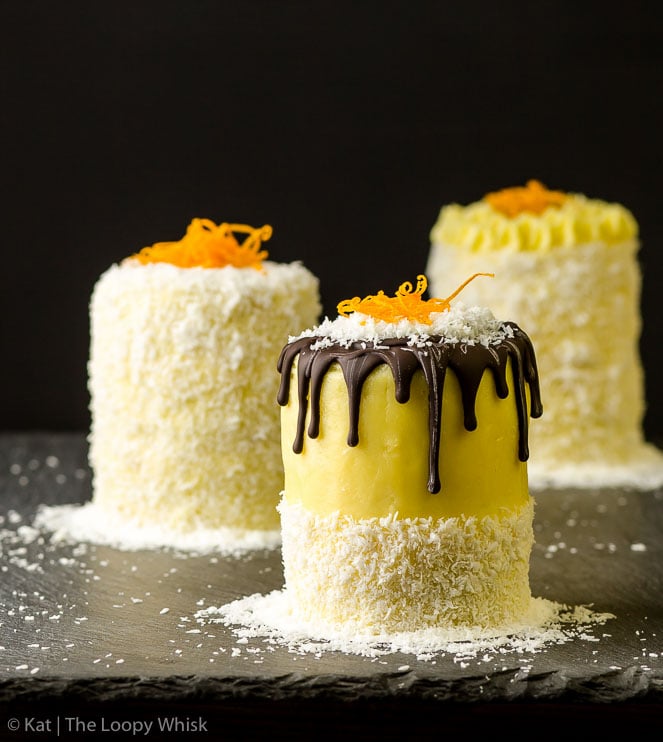 It’s not just the appearance game that these mini cakes are winning. If anything, they taste even better than they look. I know, it seems impossible, but it’s totally true. The sponge is fluffy, yet satisfyingly dense in that way that only dessicated coconut can provide. Have I mentioned it’s chock-full of coconut? It is. Exotic island vibe, remember? The buttercream is silky smooth and rich but also airy (How? Magic!) and ultra orange-y. The intense orange flavour comes from the orange curd and extra orange juice. To balance out the sweetness of the buttercream and to add an extra texture, we’ll also add orange curd layers in between the sponge and buttercream. The curd is just the right amount of tart, and is super citrus-y… it basically tastes like distilled sunshine. So, to summarise: fluffy yet dense coconut sponge + silky and airy orange buttercream + smooth and slightly tart orange curd. Are you in love yet? 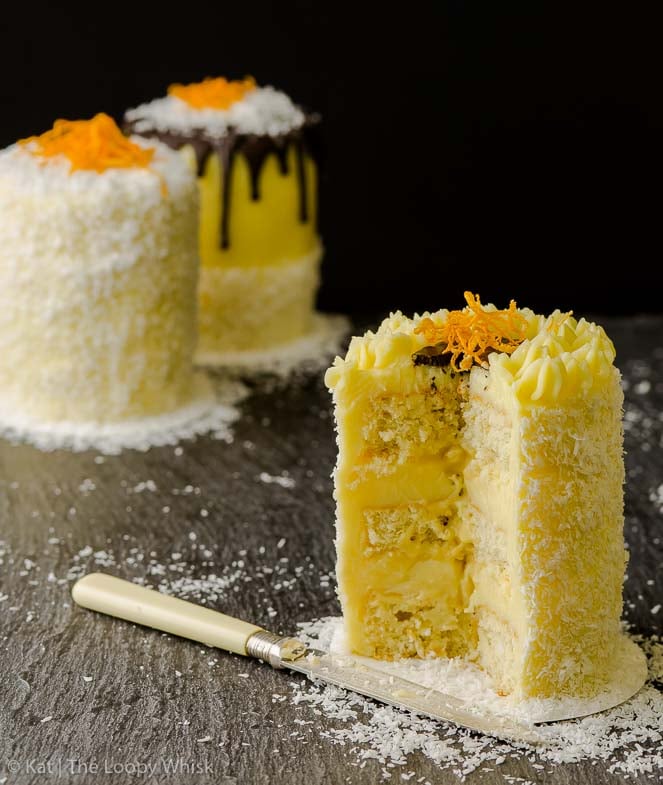 Texture is often (too often) overlooked in both baking and cooking. It’s not just all about taste, folks! Texture gives an extra dimension to the food and provides an additional experience – and because we don’t want our mini cakes to taste two dimensional, we’ll be layering the sponge, the buttercream, and the curd three ‘stories’ high. See, third dimension added. (Sorry, I just had to.) The dessicated coconut adds a dense crunch (if there is such a thing) to the cakes’ exterior and if you want to go a step further, the chocolate drizzle and chocolate ‘lake’ set on cooling and give a satisfying snap when you take a bite.

A quick side-note about the chocolate drizzle. Please please please don’t make the mistake I’ve made and put your cakes in the fridge to ‘help set the chocolate quicker’. You see these white lines in the photo below that thankfully look almost decorative? They’re because of the rapid temperature change. Give the chocolate the time it needs to set. Don’t rush it. Because you’ll be drizzling the chocolate onto a cold cake straight from the fridge, it will set quickly anyway. Learn from my mistakes. 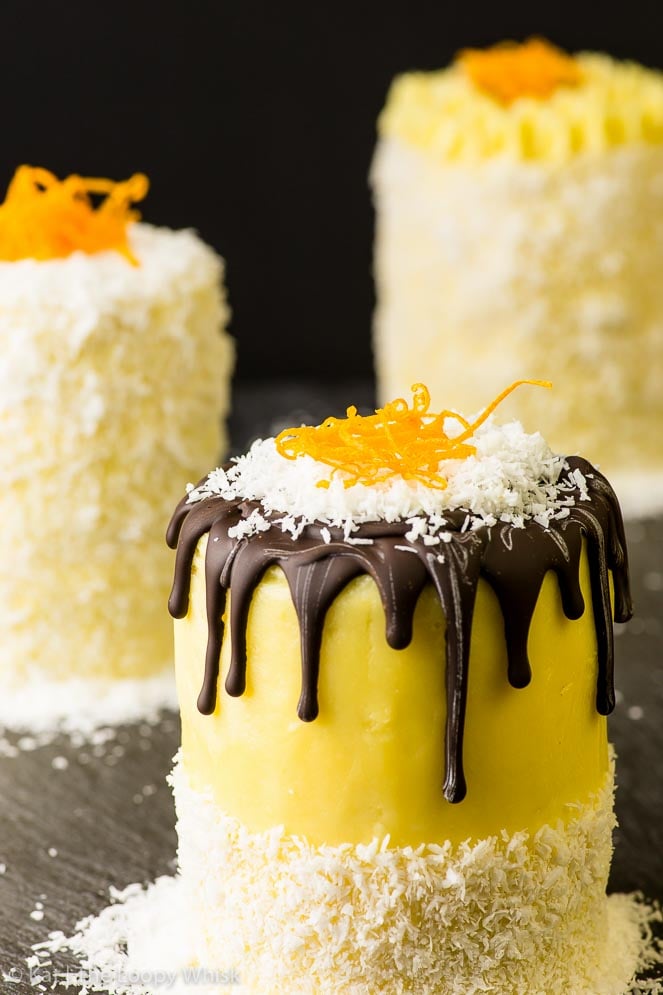 This time, we’ll take the slightly longer route of making the sponge. On top of the baking powder and bicarbonate of soda, we’ll also whisk the egg whites separately with some caster sugar until they transform into a spectacular glossiness that forms stiff peaks, and then gently fold them into the rest of the sponge mixture. Fluffiness is an extremely serious business.

The curd is made in the usual way with heating the orange juice, sugar and butter over gently simmering water, and then an egg, some egg yolks and cornflour are added. Two things here: firstly, cornflour usually isn’t a curd component, but we’ll be adding it in this case because we want our curd extra-thick so that it doesn’t cause the buttercream to become runny. Secondly, don’t make the mistake of over-heating the orange juice mixture and then adding the eggs. I’m sure you can imagine the disaster that results. Add the eggs immediately after the butter has only just melted, whisking vigorously as you do so. 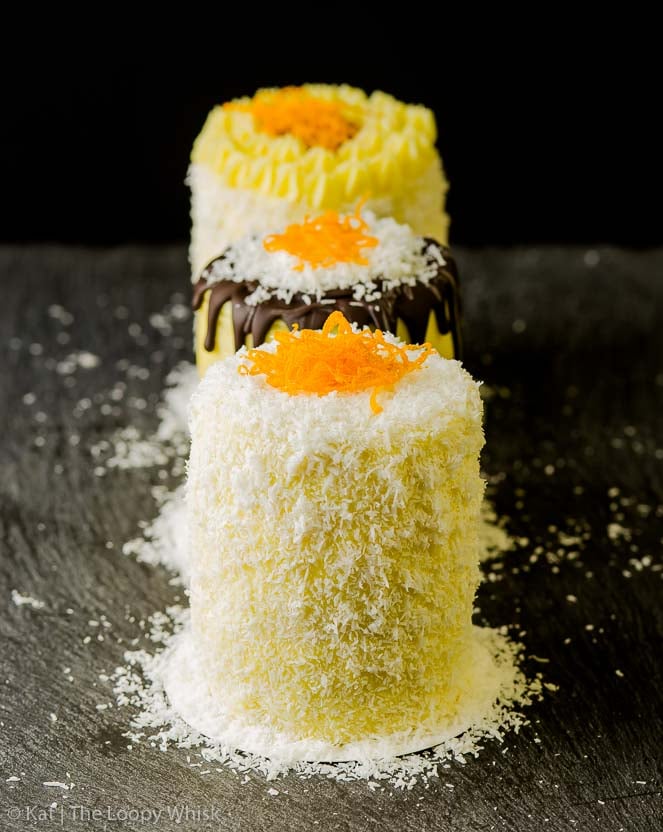 The buttercream is same old, same old. Butter, icing sugar, milk… I won’t bore you with the details. You’ll notice that I’m giving quite a wide range for how much milk to add. It’s all winter’s fault. You see, even with heating, it’s inevitably colder in the kitchen. (At least here it is.) So the butter doesn’t go fully soft at ‘room temperature’ and in order to get a soft easily-spreadable buttercream, I’ve had to add more milk. If you’re a lucky… person… and live in a warmer climate, just add less milk. 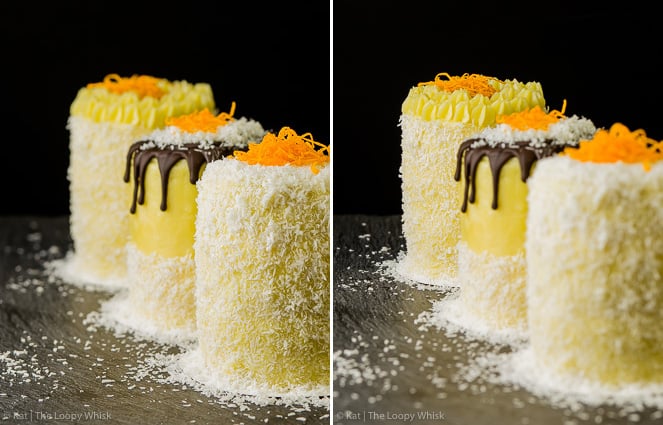 When it comes to how you decorate the coconut orange mini cakes, I leave it all up to you. Decorate them all in the same way, or follow my indecisive lead and make them all different. Smother them in coconut, or chocolate, or go minimalist and leave them ‘naked’ or just covered in buttercream. As always, go nuts. Later on, when you take a piece and savour the flavours of coconut and orange intermingling, enjoy the feeling of sand between your toes, the sounds of the waves on the cerulean ocean, and the heat of the sun on your skin. Who knew that the answer to teleportation was a piece of a coconut orange mini cake? 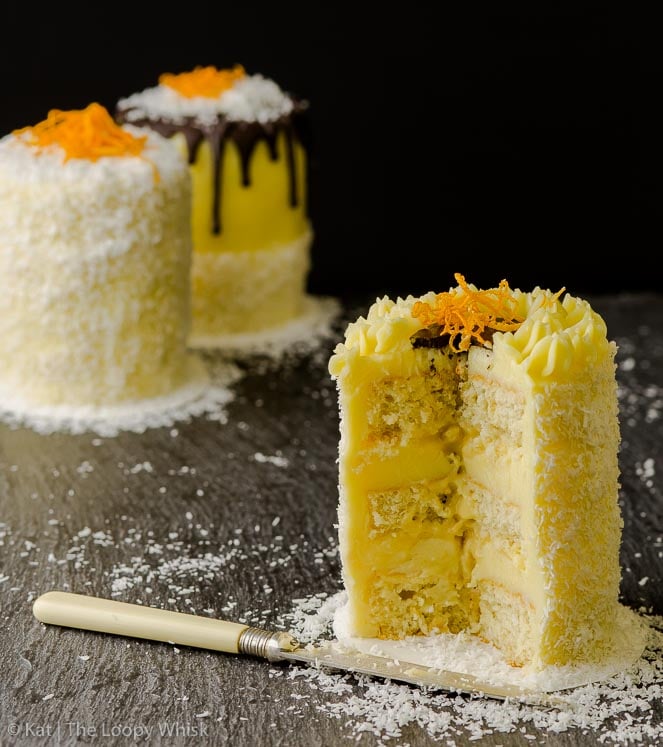 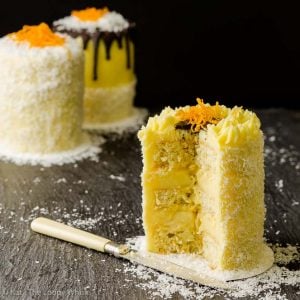 These coconut orange mini cakes may be ‘mini’ but they have the taste of a cake giant. Fluffy yet dense sponge chock-full of dessicated coconut. Silky and rich ultra orange-y buttercream. Smooth orange curd with just the right amount of tartness. Textures galore. These mini cakes have the ability to transport you to an exotic island where you can enjoy the feeling of sand between you toes and the heat of the sun on your skin, all in a single bite.
Course Dessert
Prep Time 1 hour 30 minutes
Bake/Cook Time 30 minutes
Total Time 2 hours
Servings 4 mini cakes
Author Kat | The Loopy Whisk

Assembling the cakes and decoration:

Note 1: Cornflour usually isn’t a curd component, but we’ll be adding it in this case because we want our curd extra-thick so that it doesn’t cause the buttercream to become runny.

Note 2: The amount of milk in buttercream depends on the temperature of your kitchen and therefore how soft your butter is.

Note 3: The first 1/3 of meringue mixture doesn't need to be added carefully. It's a "sacrificial" amount that serves to loosen up the sponge mix.

Note 4: Refrigeration ensures that the cakes are cold enough for the chocolate drizzle to set quickly, rather than dripping all the way to the bottom of the cake. 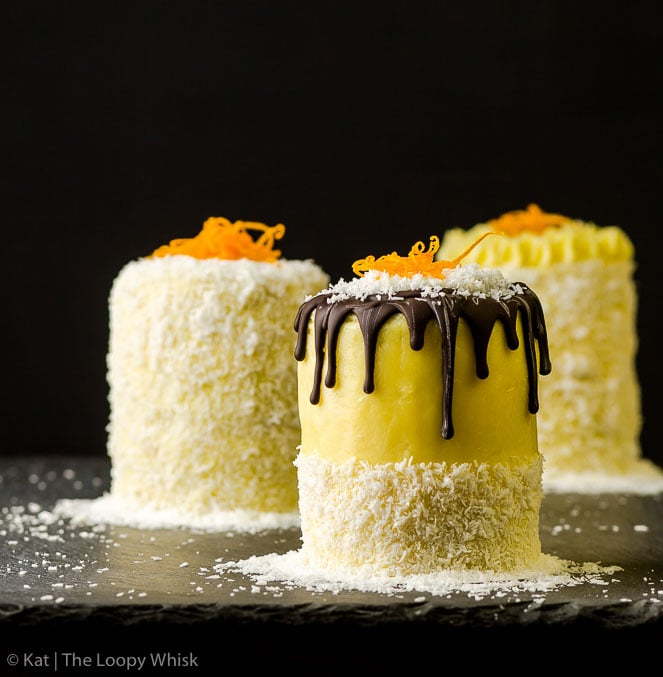 In the mood for more orange yumminess? Why not try The Ultimate Orange Cookies? 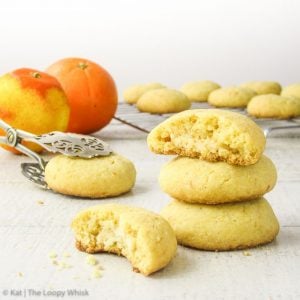 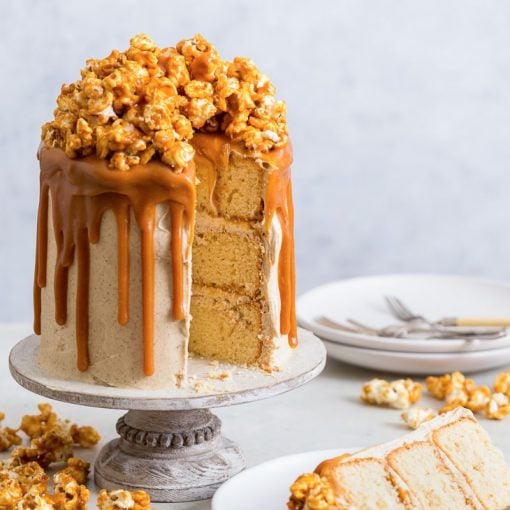 This salted caramel popcorn cake will blow your mind and set off fireworks on your tastebuds. With pillowy soft peanut butter sponges, […] 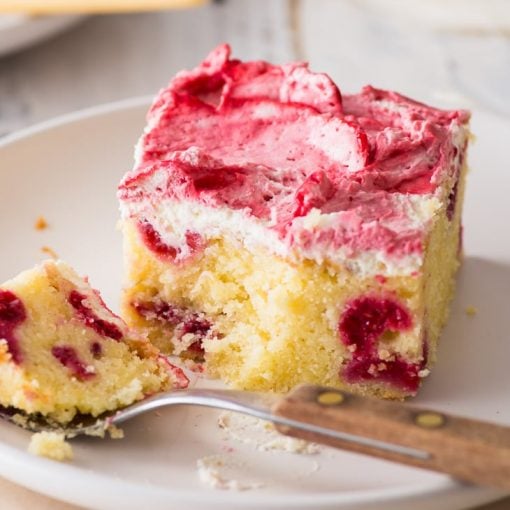 This raspberry sheet cake is equal parts delicious and easy to make. With a rich, melt-in-your-mouth sponge dotted with raspberries and a […] 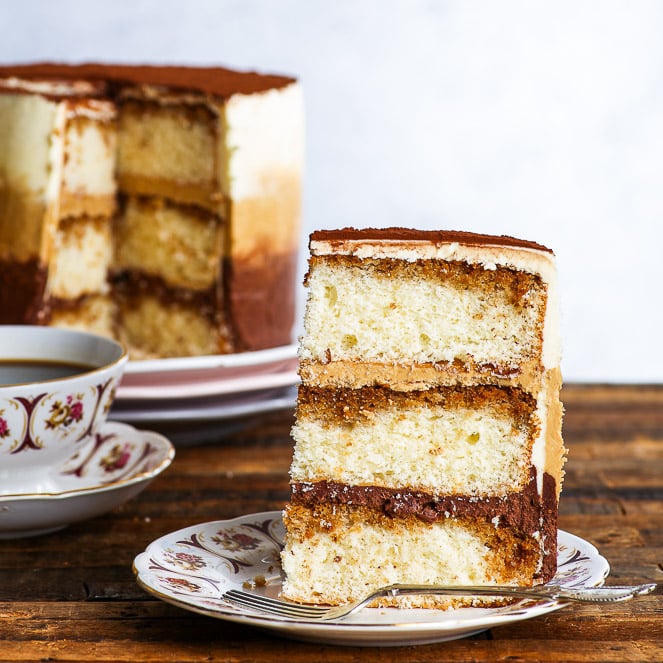 This gluten free tiramisu cake is a celebration of the best chocolate + coffee dessert out there: the one and only tiramisu. […] 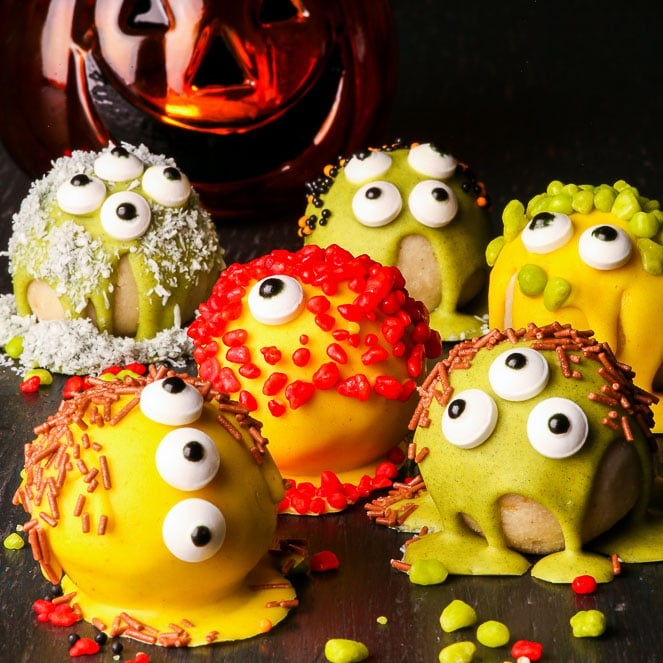