Skip to content
Order my GLUTEN-FREE cookbook!
About meCookbookContactWork with me
Home » Christmas Tree Cinnamon Cupcakes

Elegance meets quirkiness in these Christmas tree cinnamon cupcakes. A winner in both taste and looks, they will win over children and adults alike, while being incredibly simple to make. Think fluffy cinnamon cupcakes, light-as-a-cloud vanilla buttercream, and crunchy pops of chocolate goodness from the colourful decorations. Christmas trees have never tasted so good.

This is the second recipe in the series ‘The Loopy Christmas 2016’ (all recipes in this series can be found in the recipe index under ‘Christmas’) – watch this space for more Christmas yumminess. Missed the first recipe? Check out these adorable Rudolph Mexican hot chocolate cupcakes! 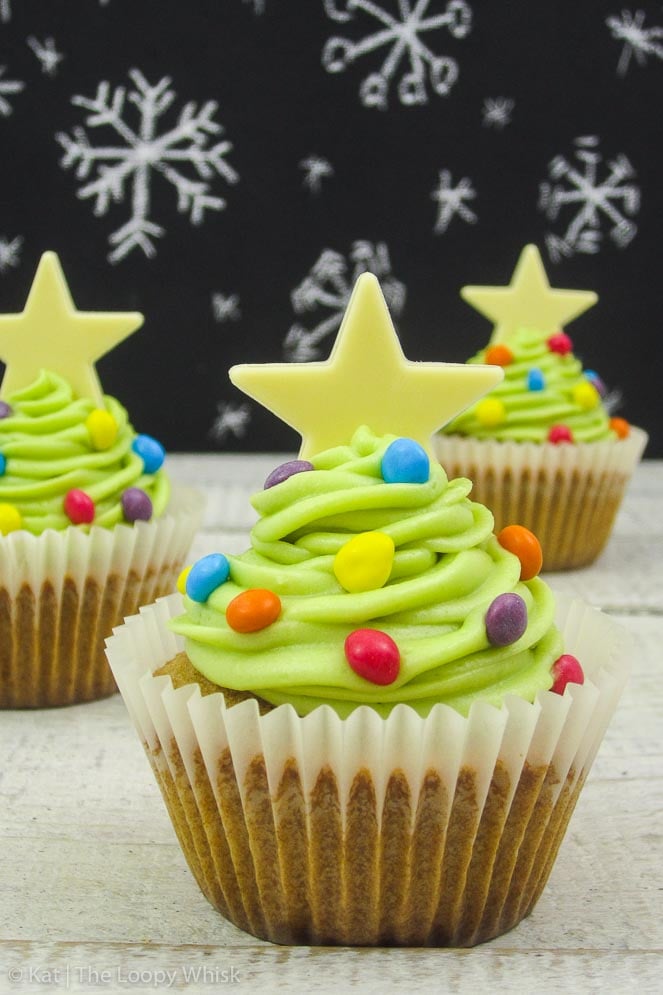 I take making cupcakes incredibly seriously. Sometimes (okay, okay… often) too seriously – it’s either the perfectionist or the scientist in me (but probably both). Let’s just say that in making these beauties tweezers were involved. Yes, I’m sure (and hope) that the decorations on the buttercream Christmas trees look incredibly effortless.

Actually, picture this: me taking a few chocolate bean decorations and carelessly, but at the same time gracefully (duh), tossing them at the soft green buttercream, where they, by some strange stroke of luck, end up in the perfect position. Like there is some sort of cupcake fairy that ensures the decorations land where they were supposed (destined?) to with no effort on my part whatsoever. And definitely no tweezers. What tweezers? I’m sure they were just a hallucination. Nope, completely effortless. Just look at this spontaneously achieved elegance: 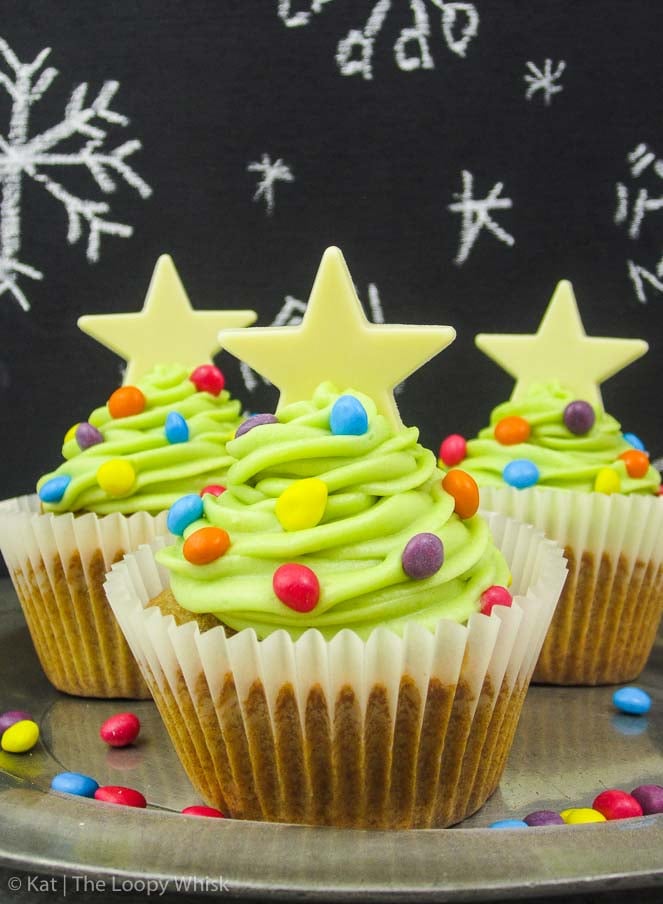 Here’s the thing: just because I have an innate Chemistry-education-induced compulsion to be annoyingly overprecise, there is no need for you to be. Especially not when making these Christmas tree cinnamon cupcakes. I mean, yes, do weigh out the ingredients precisely. And yes, do set the oven to the right temperature, and do bake the cupcakes for the appropriate amount of time. I’m not saying you should abandon all reason and re-discover the art of baking (or rather the art of what-the-holy-flying-hamster-are-you-doing?). I’m saying leave the tweezers alone. Seriously, put them down. Now. (Unless you’re plucking your eyebrows, in which case: sorry, and proceed. Also, how on Earth are you also reading this? I bow down to your amazingness.) Because there is beauty in the actually effortless effortlessness, and the imperfections it brings with it. You totally got this, trust me.

As before for the mint chocolate chip and the Rudolph Mexican hot chocolate cupcakes, we’re making the cupcakes by the throw-everything-together method. I know, how terribly time-consuming and complicated. The buttercream is no better, and how do I dare recommend to you such awfully long-winded and unrewarding recipes?

We’ll also be adding cinnamon. Lots and lots of it. Because if there’s one spice that simply screams Christmas, it’s cinnamon. This quintessential Christmas spice is all warmth and coziness, like sitting in front of a roaring fireplace, wrapped in a fluffy blanket and sipping a hot chocolate. With marshmallows. And sprinkled with cinnamon. Allow me a moment to savour this image, while you enjoy this lovely picture:

The best part of making these lovelies is, without doubt, the decorating. Go nuts. My decorations look like they do because that’s what I had on hand and what I like (and because tweezers, but we’ll be all hush hush about those). Want to go silver chic? Perhaps classic red-and-gold? Or are you in a ‘I-am-a-sparkly-unicorn-give-me-all-the-colour’ mood? You do you. Whatever you fancy, there are no rules. Because no matter how out-there the end result, they will still be Christmas tree cinnamon cupcakes, and people will love them (and you, if you’re willing to part with any). Because cupcakes. And cinnamon. And, somehow, also yummy Christmas trees. 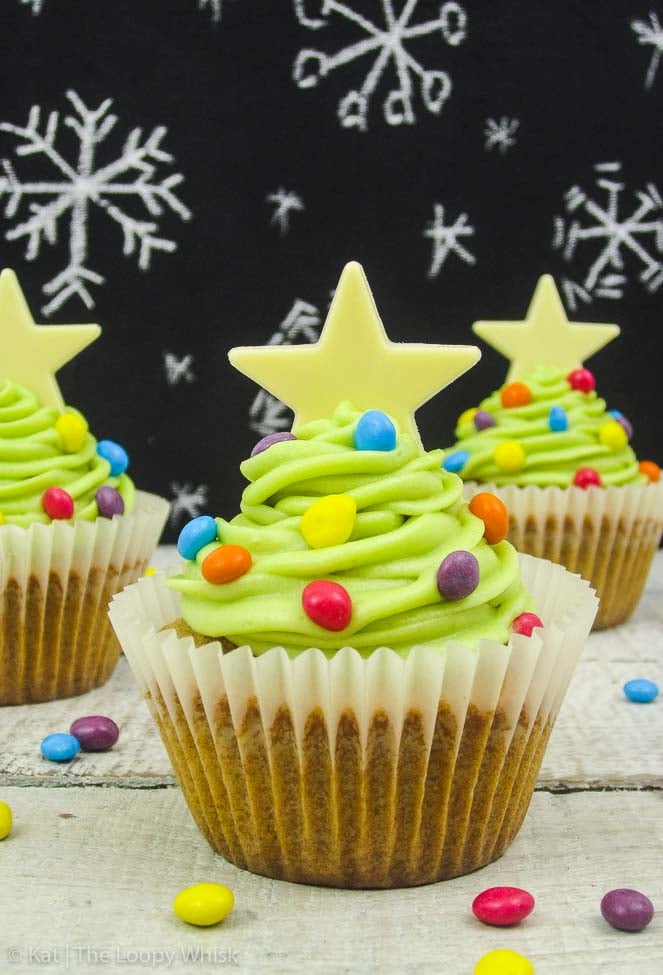 Note 1: Or use other decorations. Go crazy, and have fun! Note 2: I used a 5-point star nozzle, but feel free to experiment with star nozzles with different numbers of points to get the effect you want.
Tried this recipe?Mention @theloopywhisk or tag #theloopywhisk!

Looking for more Christmas or cupcake (or both) recipes? Why not try: 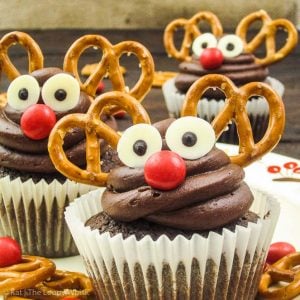 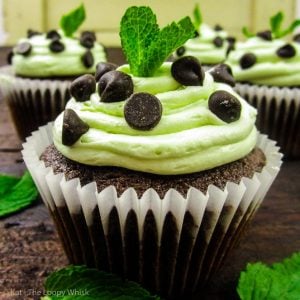 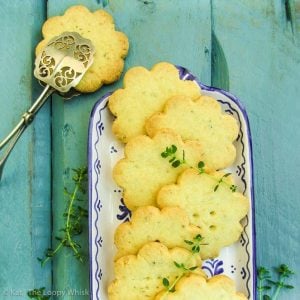