If fall were a dessert, it would be apple hazelnut frangipane pie bites. Flaky pie crust, gooey hazelnut frangipane, thinly sliced apples with just enough bite to them, and an ample dusting of fragrant cinnamon. This is fall, folks, in the best form there is – the sweet edible kind. 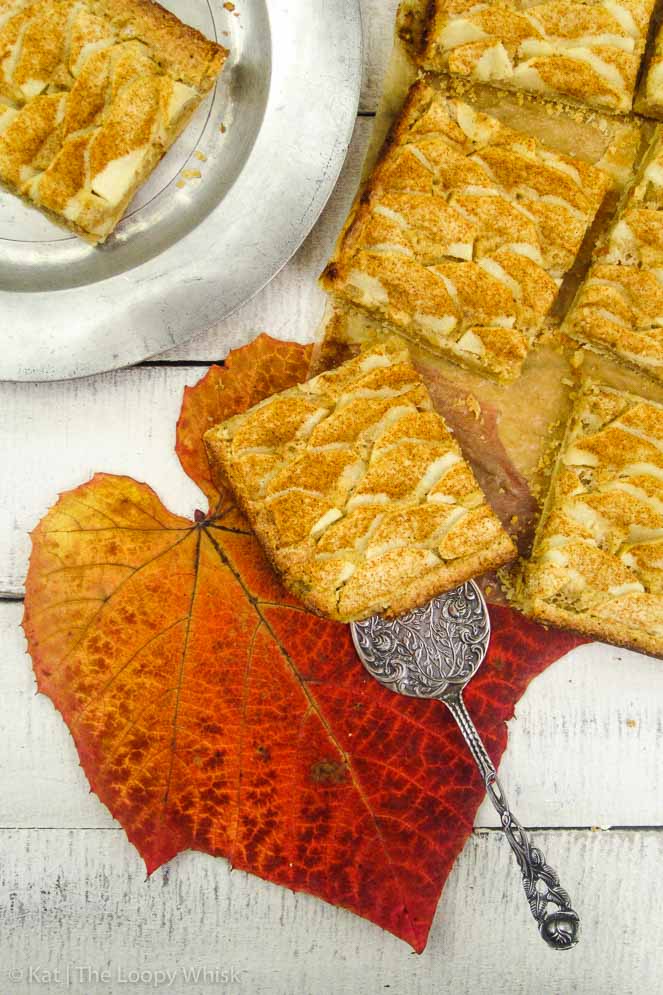 Is it weird that I prefer ‘fall’ to ‘autumn’, but cannot imagine describing the yellow, red, and orange leaves swirling in the wind in any way other than ‘autumnal’? As a non-native English speaker I like to pretend that I am entitled to pick and choose words from British and American English as I please. But regardless of how you want to call it, there is something majestic about this season. While some may perceive it as the season of dying, falling off, giving up, I always think of it as nature’s last hurrah before it gets shrouded in a white fluffy blanket (or a grey wet blanket, if you’re in the UK). There is an undeniable charm in the changing colour scheme of the forests, a subtle quirkiness in the crunch crunch crunch beneath you feet as you stomp through the colourful heaps of leaves, and a mirthful lightness as you kick through those same heaps and the leaves flap erratically around you. 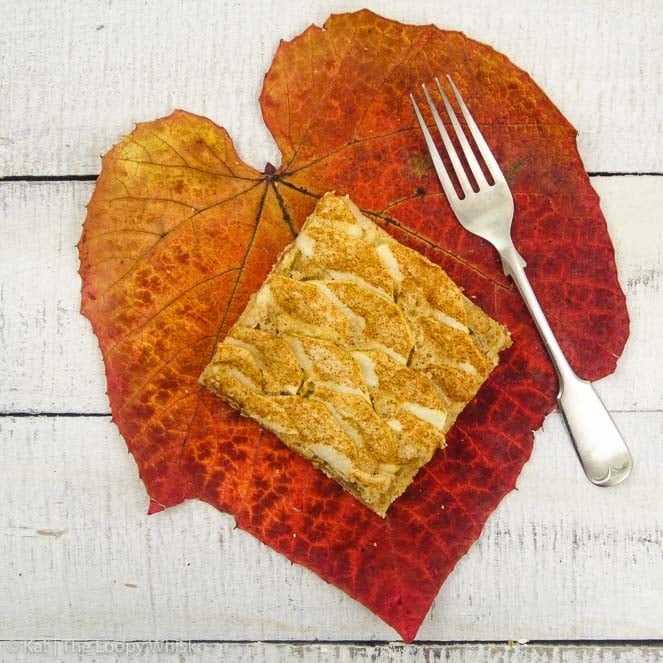 And these apple hazelnut frangipane pie bites are the very embodiment of fall. The crunch of the leaves can be found in the flaky, slightly crumbly pie crust that has a satisfying snap to it. The slight dampness of the autumnal forest floor is captured in the gooeyness of the hazelnut frangipane – although the scent of the latter is much more appetising, as ensured by the addition of cinnamon, nutmeg and mixed spice. Just like running though the leaf heaps lends lightness to the ever shortening days, so do the slightly tart apples lift up this delightful dessert. And finally, more cinnamon – the quintessential fall spice, if there ever was one. 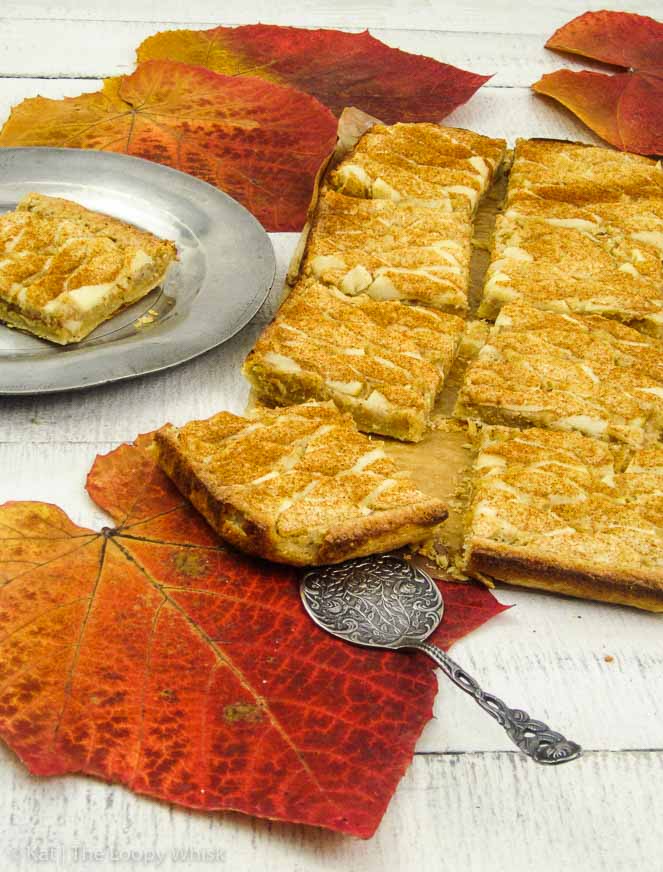 Yes, we are making our own pie crust. Just go along with it. It may seem scary, but it isn’t. And it’s so very very worth it. Trust me. Here’s the thing about pie crust: there are only a few simple things you have to pay attention to, and voila – a professional bakery-worthy result.

First of all, keep all you ingredients cold. Now, this doesn’t mean that you have to rush things. Actually, please don’t. Rushing leads to a flour-covered kitchen and frayed nerves (believe me, I know), but pie making is supposed to be a relaxing experience. So put on your favourite soundtrack, and enjoy the ride. And if your ingredients feel to warm (think melting squishy butter), just pop the whole bowl in the fridge. See – no biggie.

Secondly, we want a nice marbled effect from where larger pieces of butter peak though the dough. This gives the crust its flakiness and makes it almost puff pastry-like. So keep your butter pieces fairly large, varying in size from a large pea to a grape.

And finally, resting time. This is a big one. Allow your pie crust dough to relax in the fridge for at least 1 hour, preventing it from becoming a gloopy gluten-ish (totally a word) mess instead of the flaky crumbly piece of heaven it is destined to become. 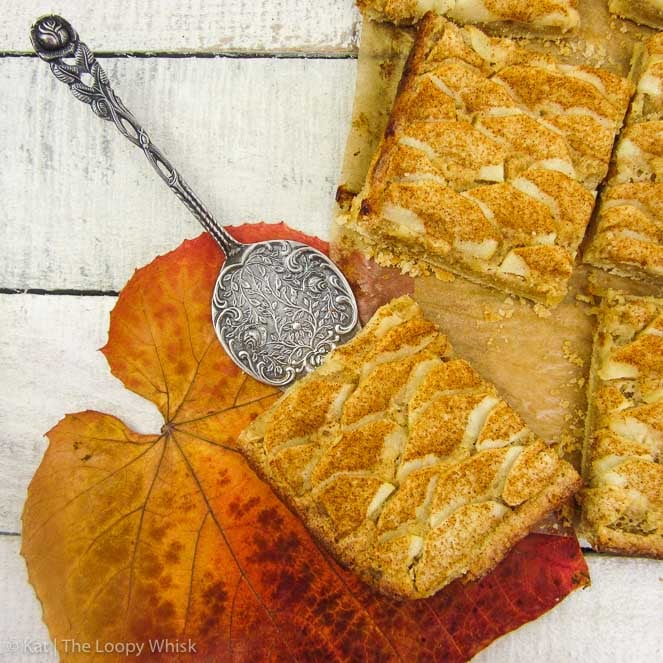 Alas, no rest for the wicked (baker)! Many wonderful things can be done during that 1 hour, such as whipping up a delightful frangipane. Roast the hazelnuts. This is non-negotiable. It brings out the full flavour of the hazelnuts, and adds a roasted chestnut vibe which you most definitely want in these pie bites. The roasted hazelnuts are de-skinned (unless you’re using blanched ones, which is totally practical and saves you slightly burnt fingers, but… you’re missing out – embrace the whole experience!), ground, and mixed into butter and sugar that have been whipped together into oblivion. Eggs are next, followed by spices (and a whole lot of them – it is, after all, a fall dessert) that are mixed with flour and sifted into the hazelnut fluffiness. Now comes the hardest part of all; resisting the delicious aromas wafting from the frangipane that tempt you to grab a spoon and… well, you know the rest. Don’t do it! Resist!

The rest is pretty much just assembly and making it look pretty. Well, and baking it, obviously. You totally have this. So go make it, and I’ll be leaving you with another lovely picture of an apple hazelnut frangipane pie bite on an autumnal leaf. Because food bloggers apparently do crazy things like that. 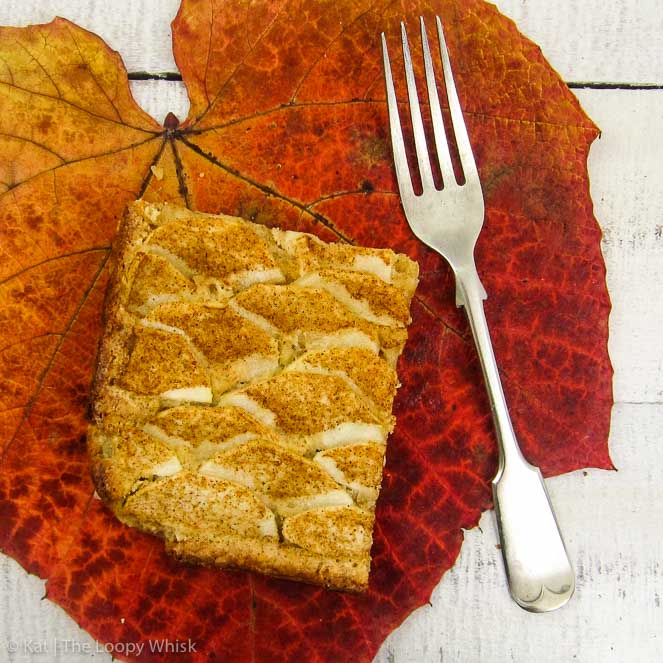 Note 1: If the mixture gets too warm and the butter starts melting, place the bowl in the fridge for ~5 – 10 minutes. Note 2: When adding the water/vinegar mixture, using your fingers to mix can get you into a rather sticky situation. Using fork is easier, and much less messy. Note 3: Peeling the roasted hazelnuts is easiest when they are still hot/warm. To protect your fingers, it is best to transfer them into a kitchen towel, make a closed pouch with it and then roll it around in your hands. The friction between the hazelnuts will remove the skin, and only a few stubborn ones will need your help to lose their skin. Note 4: If the pie crust dough from the fridge is too cold/hard to roll out, leave it at room temperature until it softens slightly (not too long though – you want the butter to stay cold, so as to retain the final flakiness).
Tried this recipe?Mention @theloopywhisk or tag #theloopywhisk! 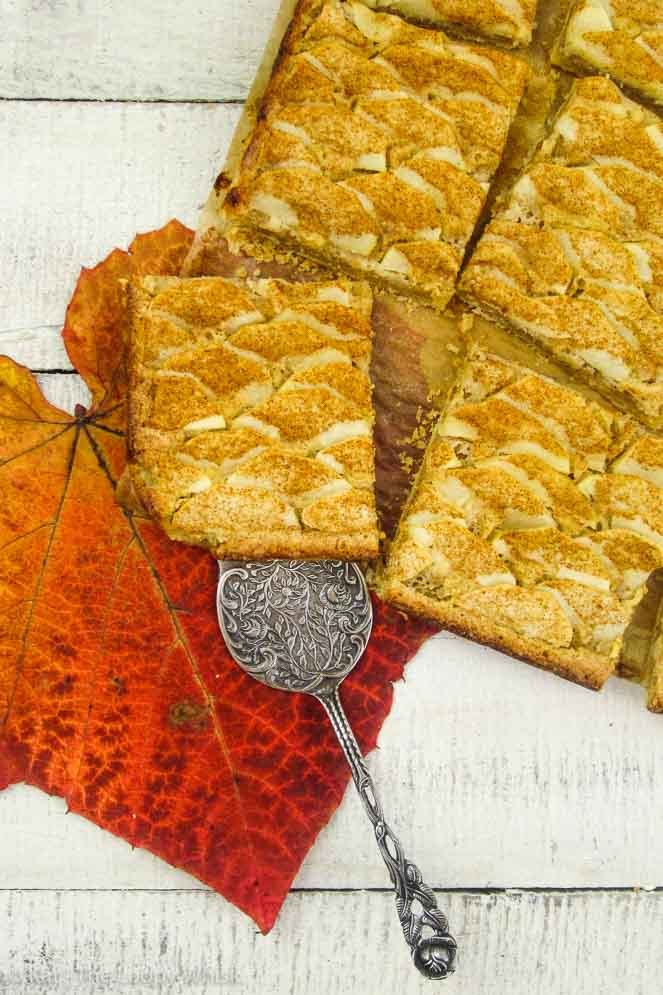